Luxembourg is one of the smallest sovereign states in Europe. But make no mistake: it has one of the the highest GDP per capita and one of the strongest passports in the world.

Its capital, Luxembourg City, is highly developed, but it still retains a countryside vibe, too. It cradles old quarters and several historic structures, earning it a place on the list of UNESCO World Heritage Sites in 1994.

Although spending at least a few days is ideal, it is possible to see much of what it has to offer on a day trip, especially if your base is in nearby areas in Germany, France or Belgium. The most popular attractions are clustered mostly within the Old Town center.

If you plan on visiting Luxembourg City on a day trip, here’s a list of the best places to visit, arranged itinerary-style. But before we begin, some reminders:

Now that we got ’em out of the way, let’s start!

From the Luxembourg Central Station, you can take a short walk to the Passarelle, also called Luxembourg Viaduct or Old Bridge. It was completed in 1861 and served as a link between the city center and the central railway station.

This 300-meter-long bridge stretches over Pétrusse valley at 45 meters above the valley ground. It features 24 arches and provides a good venue for sightseeing and panoramic views of the city and the ancient walls. 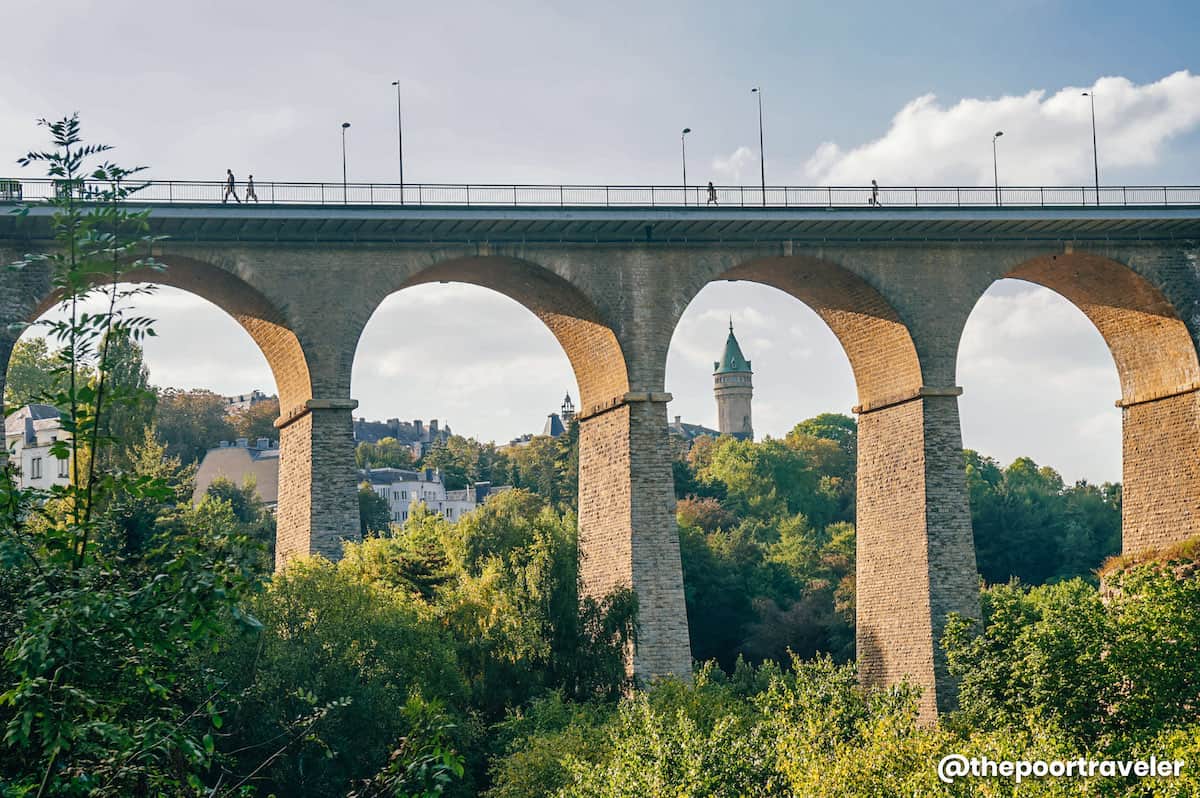 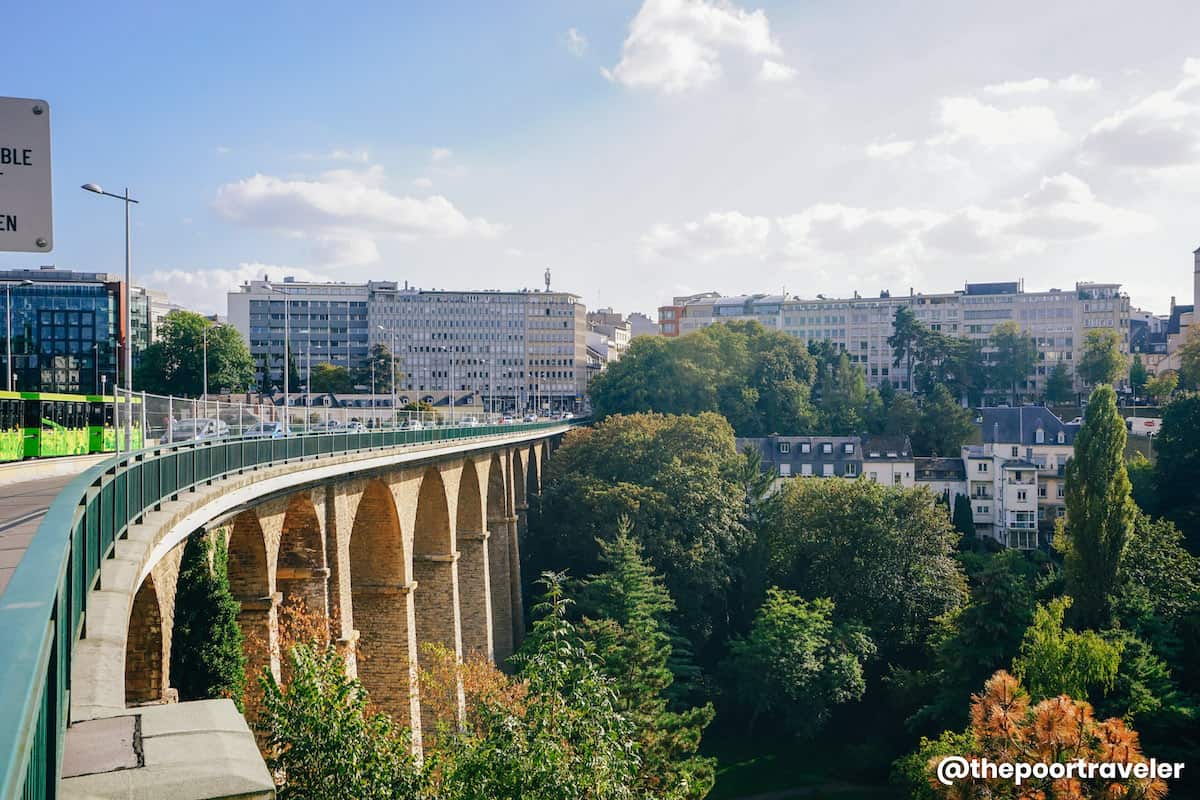 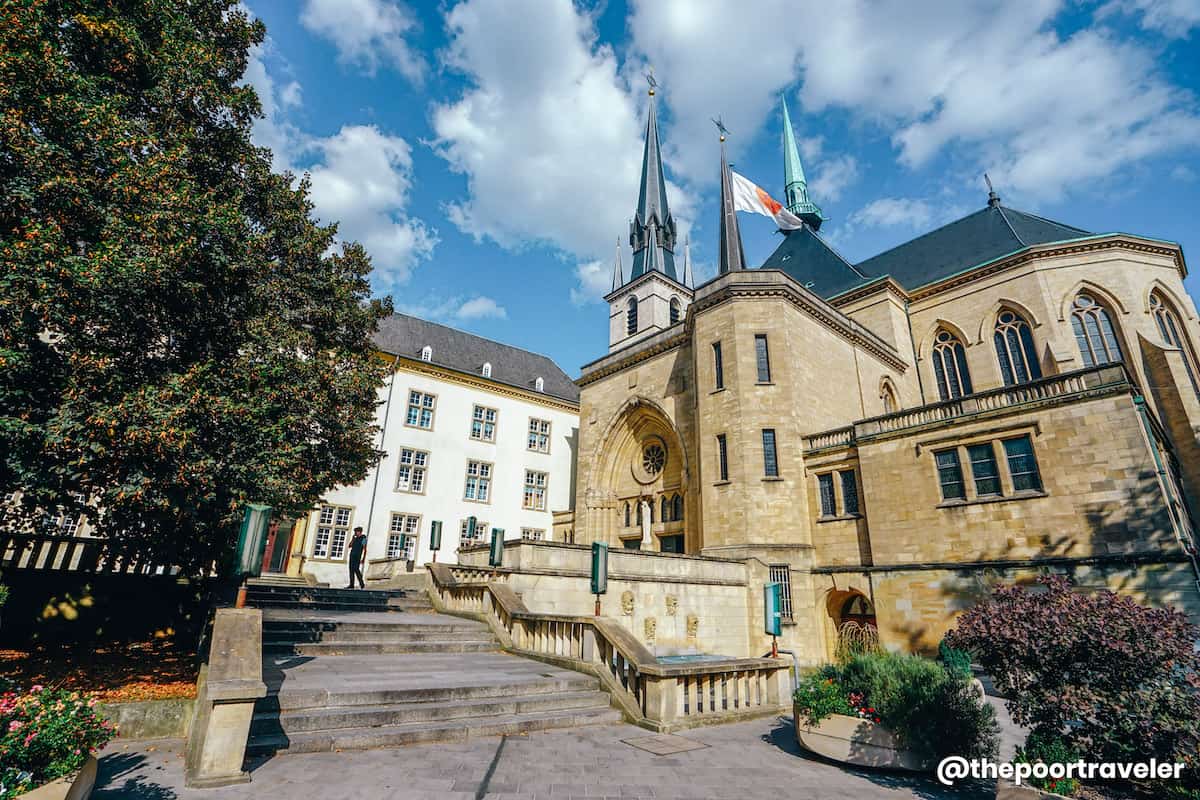 From the Passerelle, walk straight ahead a little bit and you’ll be greeted by the Notre Dame Cathedral, the sole cathedral in Luxembourg. This 17th-century church was originally established by the Jesuits. It was converted into a Catholic church in the 19th century.

The structural design follows the Gothic and Renaissance architectural styles. It features three towers, the statue of Maria Consolatrix Afflictorum (the nation’s patron saint), glass-stained windows, and crypts that serve as the final resting spots for the late Grand Dukes and Grand Duchesses of Luxembourg.

The cathedral is located along Boulevard Franklin Delano Roosevelt. 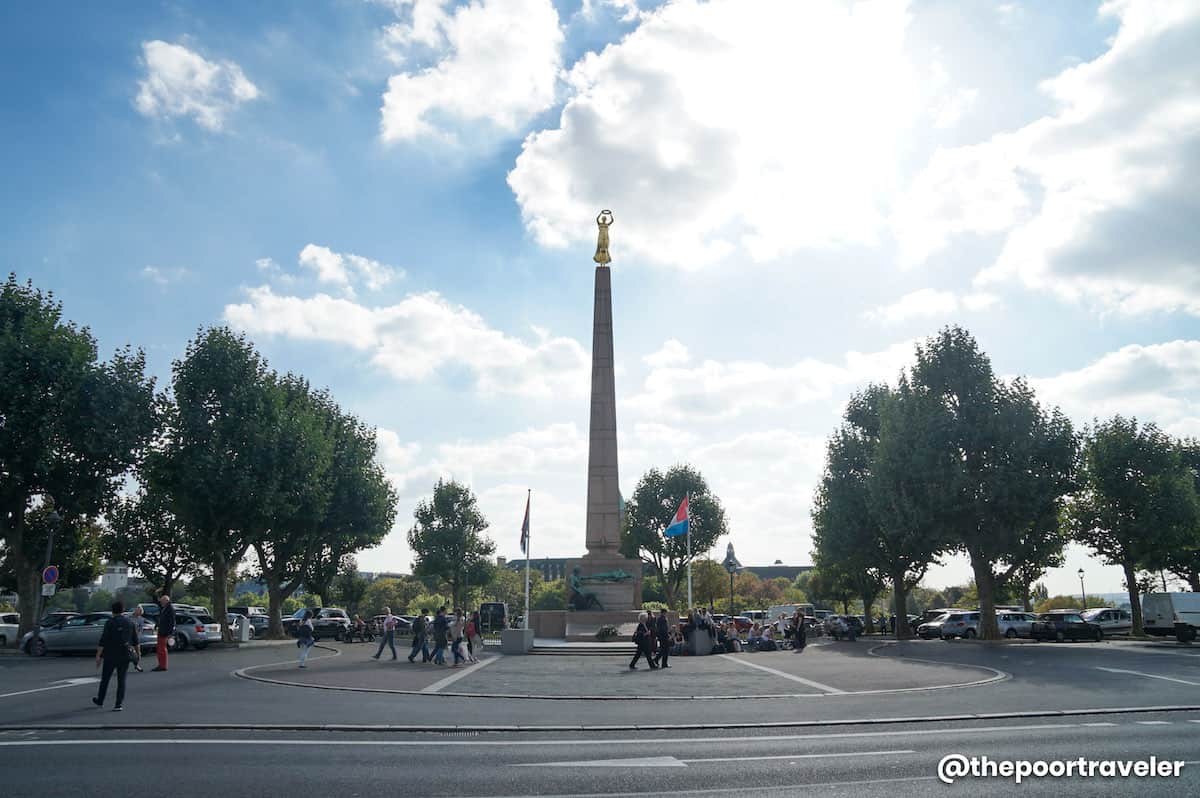 Just a short walk from the Notre Dame Cathedral is the Constitution Square, dominated by a towering memorial obelisk with a bronze statue, “Gëlle Fra”, holding a wreath on top of it.

Built in 1923 on the former 17th-century Beck bastion, the monument is called Monument du Souvenir (Monument of Remembrance) in honor of the citizens who voluntarily enlisted and perished during World War I. The square offers a good view of the Pétrusse Valley below and the Adolphe Bridge (New Bridge) beyond.

Don’t leave the Place de la Constitution without a good look at Pont Adolphe. For this itinerary, because of time constraints, you won’t go near the bridge, only admire it and take photos from this square.

Officially launched in 1903, it was commissioned during the reign of Grand Duke Adolphe. Since then, it has undergone several renovations and additions resulting in today’s double-decked stone arch bridge status.

Its total length is about 153 meters, straddling over a lush park in Pétrusse below and connecting Ville Haute (via Boulevard Royale) and Gare (Avenue de la Liberté). The top deck features a two-lane traffic road and two pedestrian paths, while the lower deck has a two-way bicycle lane that also serves as a pedestrian path. The bridge’s upper deck is expected to accommodate tram tracks in the near future. Both decks provide views of the park and the city, but the upper deck boasts an unobstructed view of the area.

One of the key attractions beside Place de la Constitution is Pétrusse Casemates. A medieval bastion and fortress ruins in the Pétrusse Valley, it is a testament to the country’s strategic location. During the tumultuous time of conflicts between European nations, the site had been used for military purposes and had been altered many times.

In 1867, the fortress was mandated to be torn down as a sign of Luxembourg’s neutrality based on the agreements in the Treaty of London. It was included in the UNESCO World Heritage Site list in 1994, together with the city’s old quarter.

Opening Hours: As of writing, the site is temporarily closed but you can still view it from either Pont Adolphe or Place de la Constitution. Reopening date to be announced.
Entrance Fee: €4-6

Established in the 17th century, it was originally meant as a parade ground for the French garrison. It is centrally located in the old town and bordered with lime trees that trace back their roots to the reign of King Louis XIV.

Today, the square is part of the pedestrian-only zone and is surrounded by restaurants and cafés, making it a favorite meeting place for locals and visitors alike. It has become the city’s activity center where flea markets appear every second and fourth Saturday, band performances are staged during summer, and the Christmas market is set up. 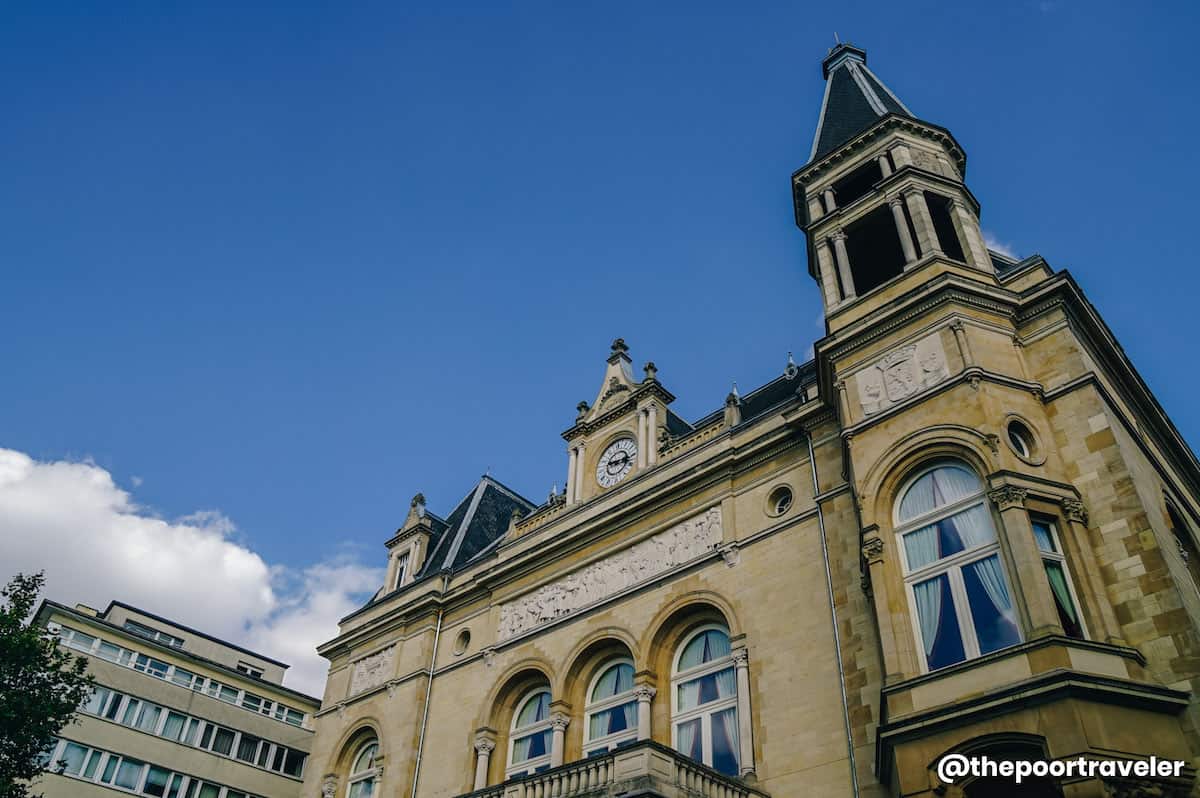 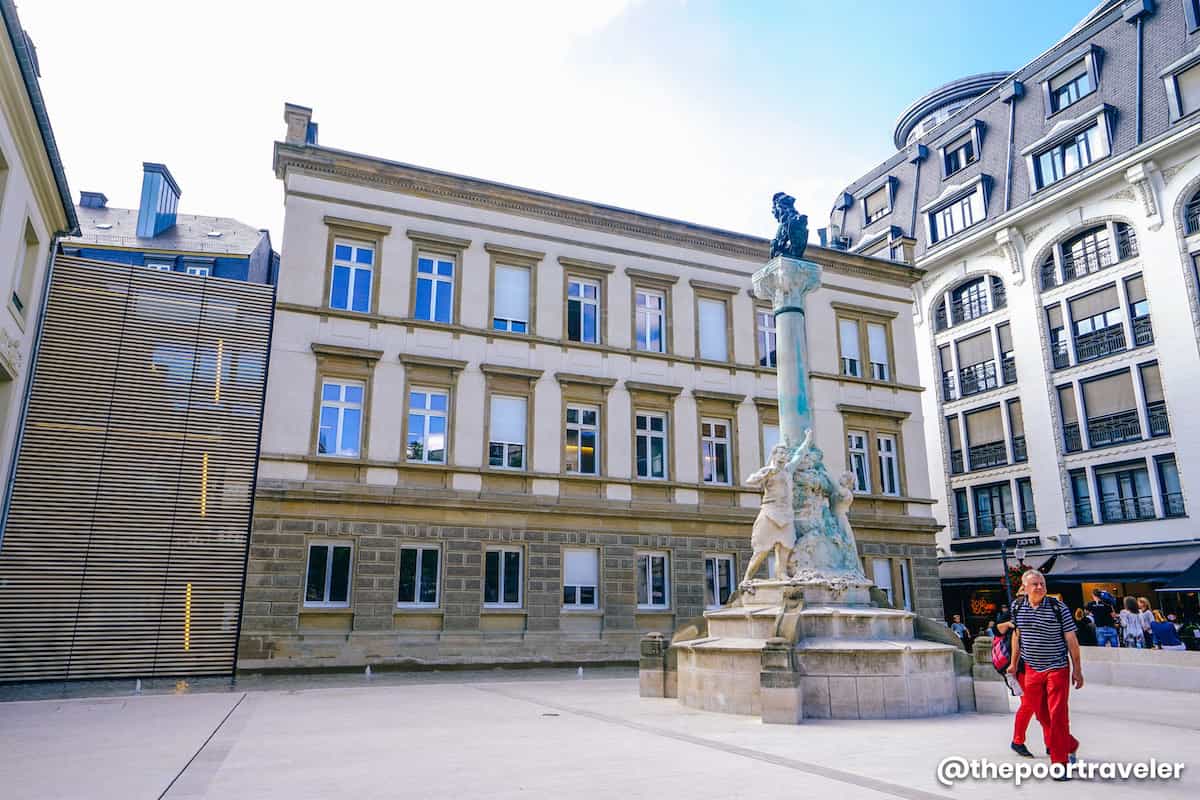 Next to it is the smaller Jan Pallach Square, which is marked by the towering Monument of Dicks and Lentz, a historic structure that pays tribute to the national poets who penned the national anthem.

From Place D’Armes, cross the Place Guillaume II to get to the Grand Ducal Palace (Palais Grand Ducal). 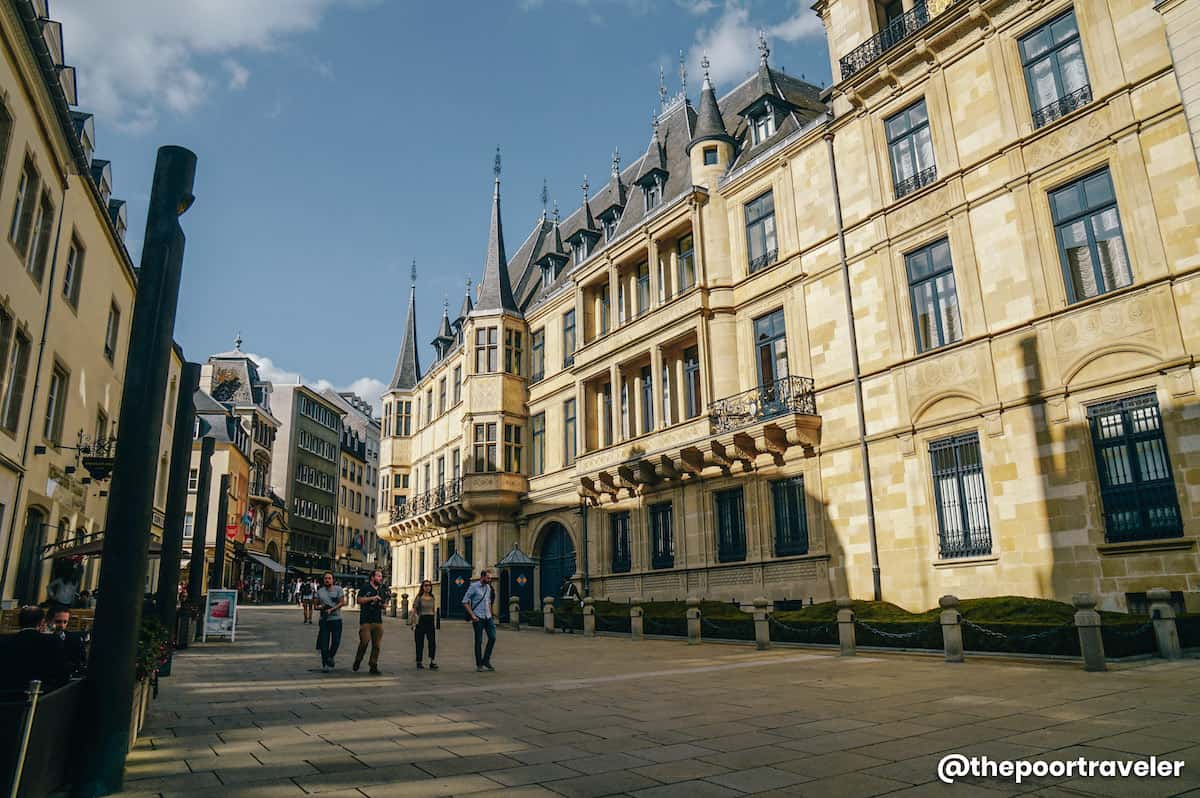 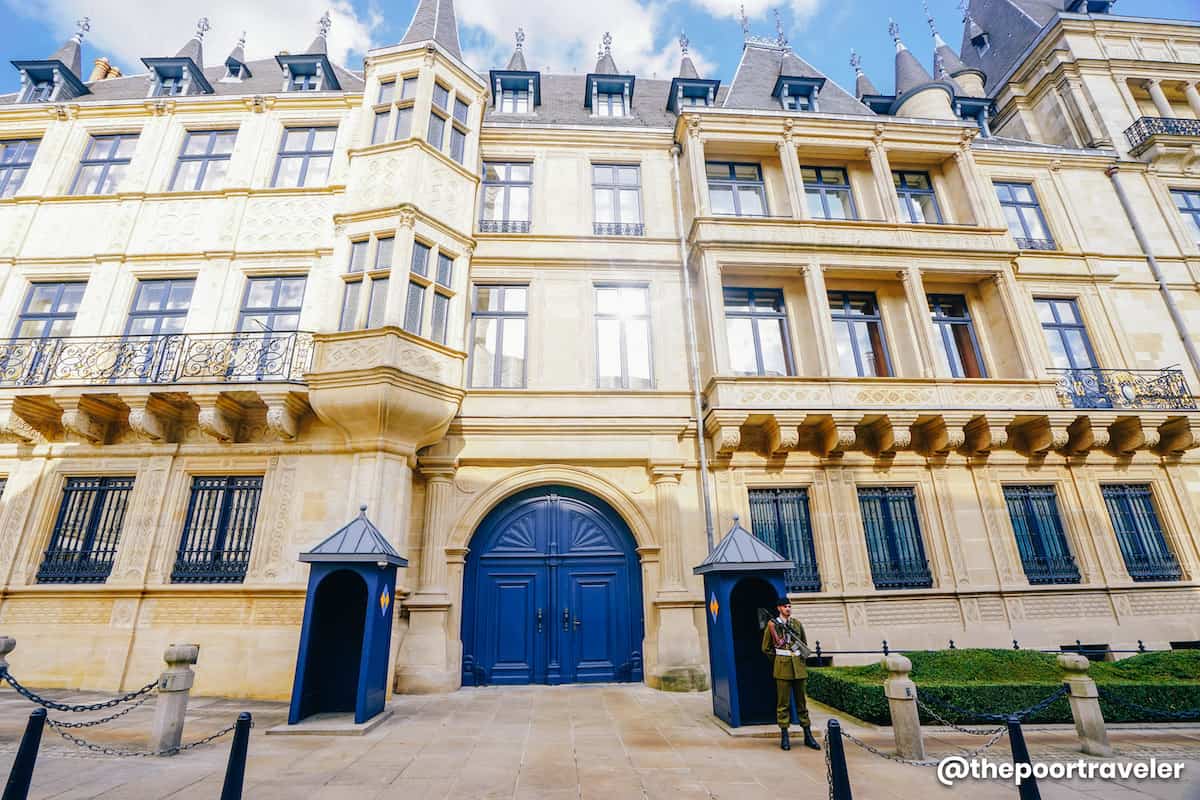 Throughout history, this 16th-century palace has always been the seat of power and the official residence of the head of the Grand Duke of Luxembourg. It is also the place where he works and fulfills his duties together with the Grand Duchess and their staff. Official functions are held here and foreign heads of state are welcomed during official visits.

It’s known for its beautiful facade and intricately designed and decorated interior. Guided tours are available in the summer season (July – August) where visitors have access to some parts of the palace.

Opening Hours: You can only access the palace through guided tours in summer, usually July to August, sometimes up to the first week of September. The schedule for the daily guided tours is 9AM to 5PM daily except Wednesdays, which runs from 12PM to 5PM.
Entrance Fee: €12 (Adult), €6 (4-12 y/o), FREE (Below 4 y/o). You can get your tickets prior to your visit online or purchase from the Luxembourg City Tourist Office in Place Guillaume II.

A short walk from the Palais Grand-Ducal is the Luxembourg City History Museum. Coming from Marché-aux-Herbes Street, you will be welcomed by the museum’s glass facade.

Launched in June 1996, the museum was formed by combining four old townhouses and restoring them to incorporate modern design to the ancient architecture. It showcases permanent and temporary exhibits that relay the history of the city. All six floors display collections that communicate the evolution of the city through important documents, events, people, and things. It also features a spacious glass elevator and ancient cellars.

Head north via Rue du St. Esprit then Ru Large for five minutes and you’ll reach the National Museum of History and Art Luxembourg. Born out of the kindred desire of the locals to promote the city’s history, it preserves and protects historic artifacts and artworks that narrate the history of Luxembourg.

It began to take shape when the ‘Archaeological Society’ was formed in 1845, a few years after the signing of the Treaty of London, marking the nation’s independence. But it’s not until 1946, after World War II, that the museum was able to officially open to the public.

Continue walking north until your reach Eich Gate, one of the Vauban Towers (Tours Vauban). The other is Bons Malades Gate on the other side of the Alzette Valley.

Both towers are located in Pfaffenthal village, one of the oldest districts in the city. Despite its central location, the village exudes a rural vibe with the old and new structures interweaving seamlessly along the verdant valley.

These 17th-century towers — Eich Gate and Bons Malades Gate — were jointly named after its creator, French military engineer Sebastien Le Prestre de Vauban. The towers were part of a defense fort and were meant to delay the attacks of the advancing enemies.

The two towers are linked by a narrow bridge that presents a picturesque view of the river and the valley. You can access the bridge from either tower. If you want to learn more about these towers, there’s a small audiovisual room with a 9-minute video narrating its history at the Bons Malades Gate.

If you decided to cross the valley all the way to the Bon Malades Gate, head back to the other side and find the Pfaffenthal Lift. You can enter “Panoramic Elevator of the Pfaffenthal” on Google Maps for good measure.

Luxembourg’s topography is characterized by gorges, valleys, and plateaus. To make it more accessible and navigable, the city planners saw the need to build cable transport modes to link the elevated parts of the city to both Alzette and Pétrusse valleys. Pfaffenthal Lift, together with Grund Lift and Pfaffenthal-Kirchberg funicular, forms this triad of cable mode of transportation. The construction of the public elevator started in 2009 and officially launched to the public in July 2016.

The towering elevator features an enclosed footbridge with glass panels and flooring at the end of the bridge on the Pfaffenthal side. It connects the historic city center of Ville Haute via Parc Fondation Pescatore bicycle and pedestrian lane to Pfaffenthal Village in Alzette Valley. The footbridge offers a panoramic view of both the city center and the valley, including the road below.

Opening Hours: 6:00 AM – 1:00 AM (Daily). CLOSED for maintenance every first Monday of the month.
Entrance Fee: FREE

Like Pétrusse Casemates, the Bock Casemates were built during the Spanish reign in the 17th-century. But various rulers throughout its long history benefited from the ingenuity of the defensive system. 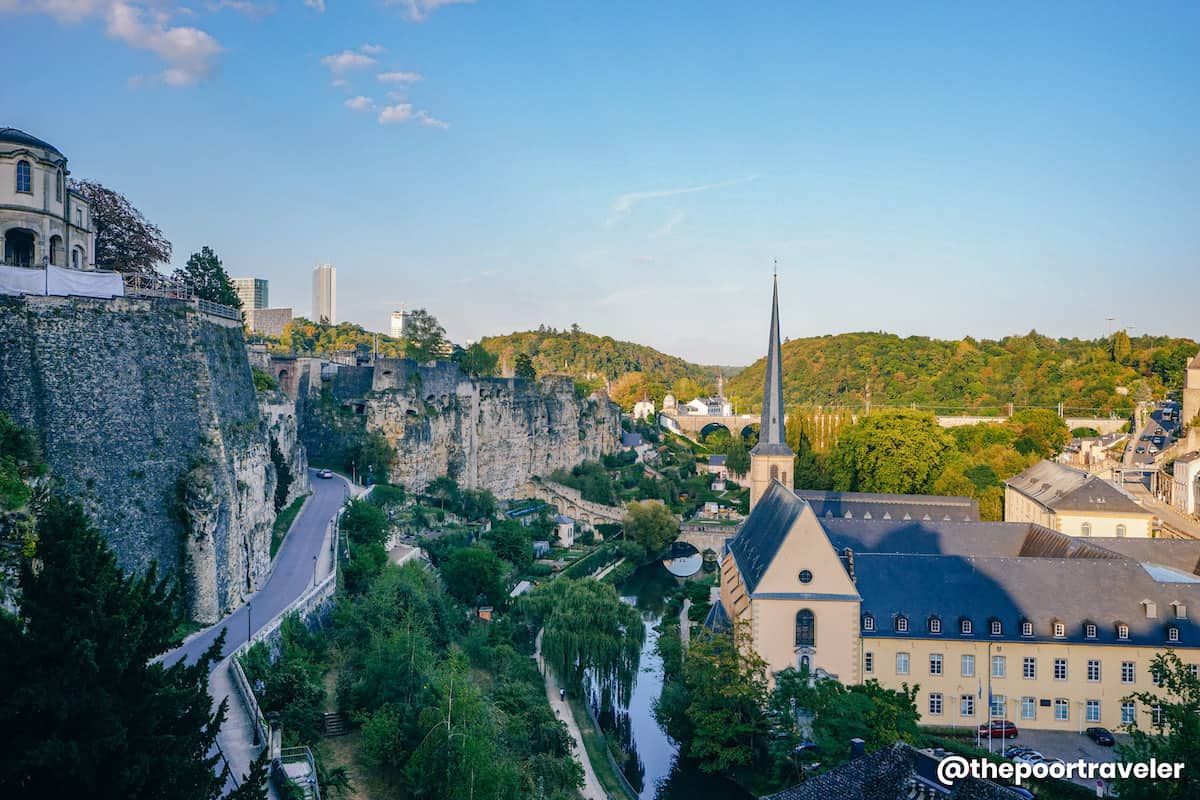 After Luxembourg gained its independence in the 19th century, Bock Casemates (and other fortress ruins) became inaccessible to the public until its reopening in 1933.

Currently, of the 23 kilometers total, only 17 was left but it’s still well-preserved underground. It was included in the UNESCO World Heritage Site list in 1994. 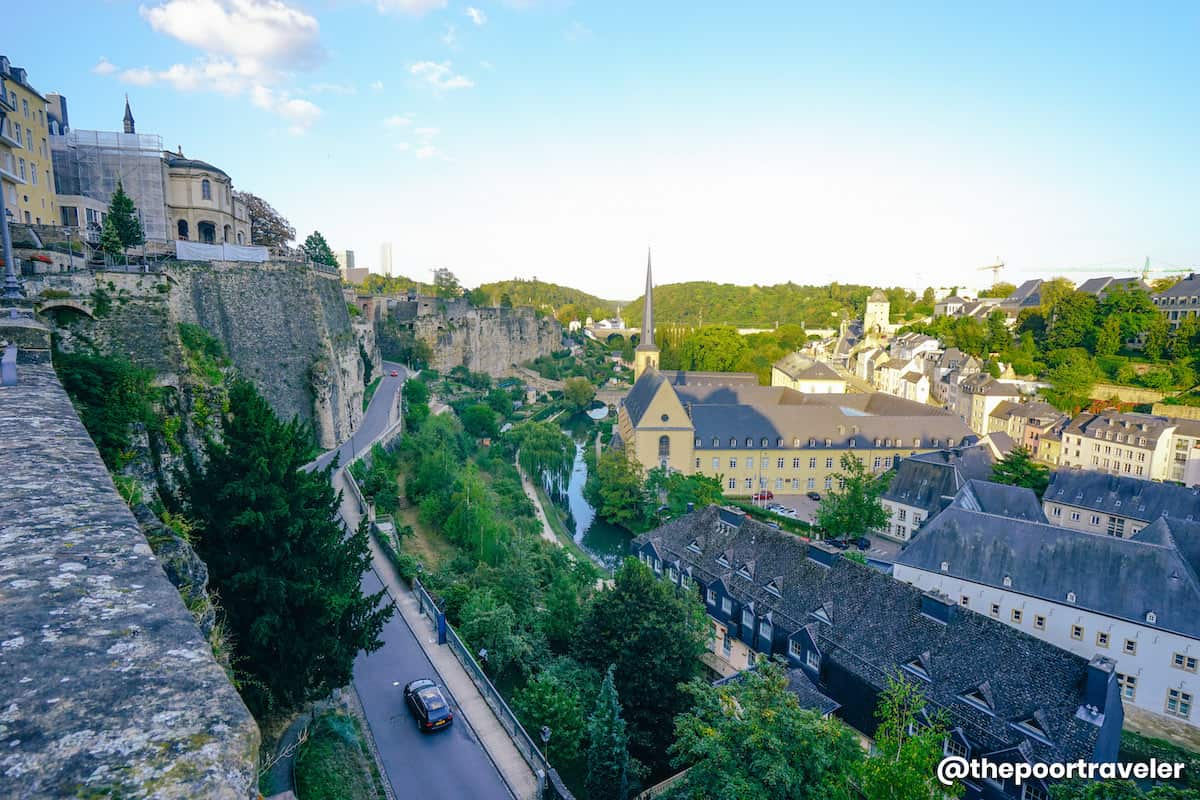 Just a few meters walk from Casemates du Bock, Chemin de la Corniche is said to be the best observation deck in the country, boasting a panoramic view of the Alzette Valley, the Grund, and the river canyons below.

The whole length of the footpath covers the ramparts from the Bock Casemates to the Citadel of the Holy Spirit along the Alzette Valley. 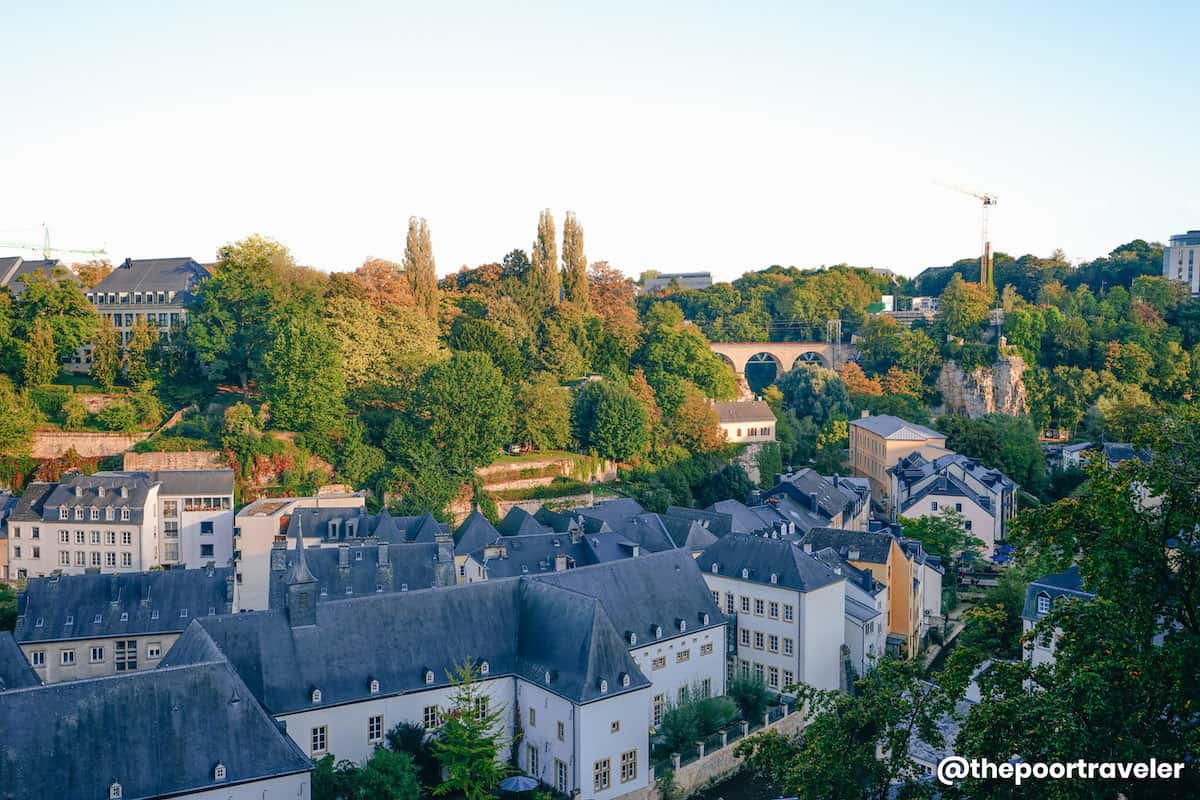 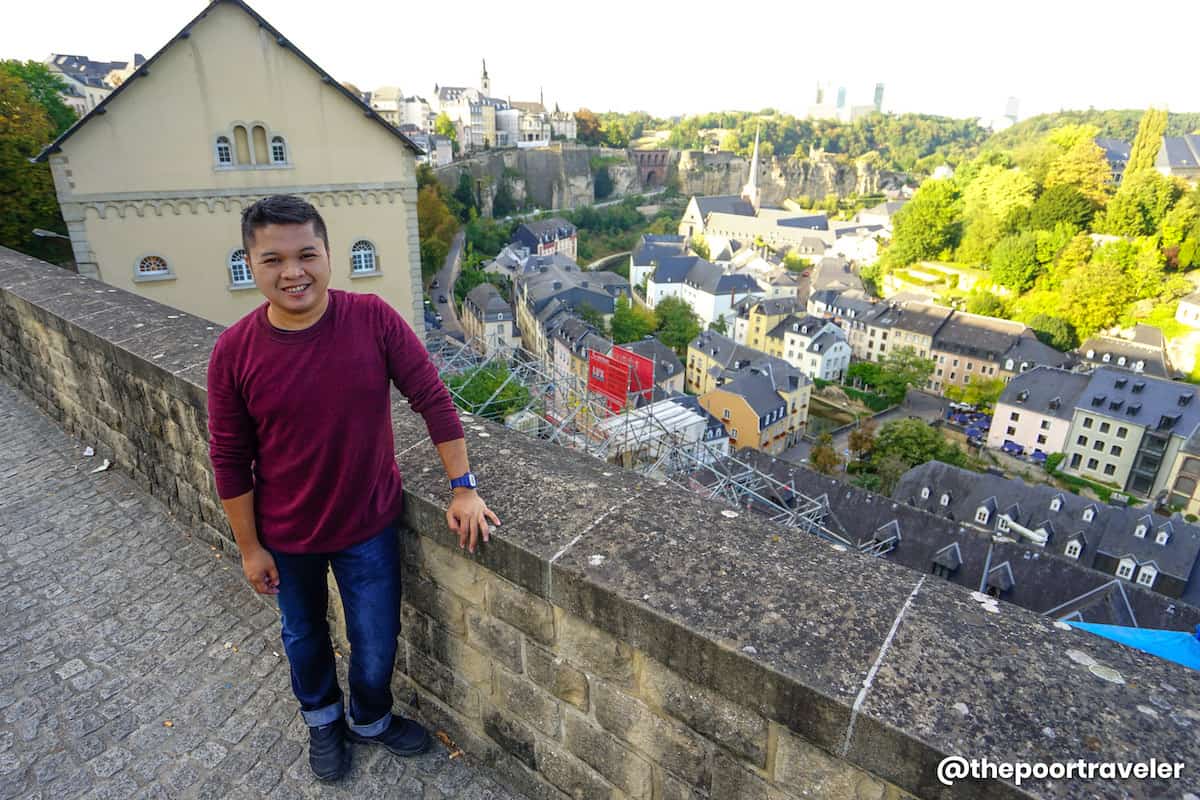 It is also a popular nightlife spot with restaurants and bars. It boasts two Michelin-starred restaurants — Kamakura and Mosconi.

From the Grund district, you will cross La Passerelle again going back to the Luxembourg Railway Station.

This is the main railway station of the capital city; consequently, it’s the hub for the domestic railway network and international railway connections. It links Luxembourg to its neighboring countries France, Germany, and Belgium. While waiting for your train, take the time to appreciate where you are because this is not just a simple train station; it’s also a historic site in itself. 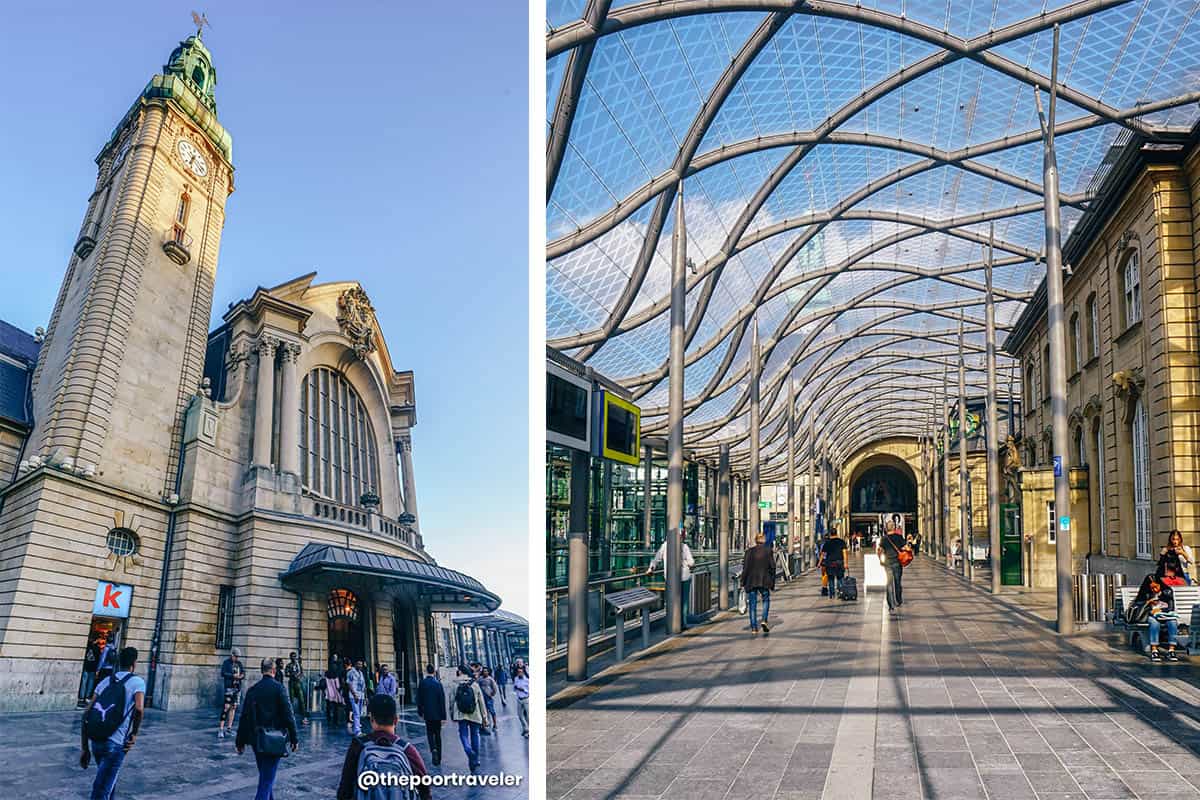 The very first structure was launched in 1859, but it was reconstructed in 1907 and 1913, following the Moselle Neo-Baroque, a distinctive style of public buildings in Luxembourg. Some of its key features are its clock tower, the entrance hall’s mosaic, and the painted ceiling.

If you’re visiting Luxembourg on a day tour, then you must have a place to stay elsewhere already. But if you change your mind and decide to spend at least a night in this fab city, here are some of the best reviewed properties on Booking.com that are relatively budget-friendly. I say “relatively” because Luxeumbourg in general is on the expensive side of the spectrum.