Need help planning your trip? Here’s our latest PUERTO PRINCESA PALAWAN TRAVEL GUIDE BLOG, with all the tips and information that we know such as hotel and tour recommendations, things to do, budget and expenses. We also included a sample DIY PUERTO PRINCESA ITINERARY!

If you trace my history as a travel blogger, you’ll probably find the very roots of it in Puerto Princesa City.

It happened over 10 years ago. My grandfather had passed away and I needed to fly to Puerto Princesa to attend the wake and the funeral. In the middle of mourning, I was captivated by the city. I had never seen one as clean, green, and organized as the Palawan capital. Prior to this trip, I had never traveled far for leisure, not counting the Boy Scout jamborees I joined as a child. I was already keeping a blog then, not this travel blog but just an online personal journal for my random musings.

After that trip, I found myself writing about a place for the first time. I planned to return just to explore the city, something I wasn’t able to do that time, but it didn’t happen soon enough, for financial reasons. It would take more than two long years before I set foot in the city again; thanks to a company outing. That was the first of the many times I would find myself

Since then, Puerto Princesa has been my favorite city in the country. Even when I’m bound for another Palawan destination like El Nido or San Vicente, I would find time to stop and stay longer in the city, not just for personal, sentimental reasons. The city has a wealth of attractions, topped with good food, outstanding cleanliness, and friendly, disciplined people.

Puerto Princesa City is the capital of and the only city in Palawan, Philippines. While it is considered a highly urbanized city, it still looks and feels more like a big town. And in the past few years, more like a boomtown. The city has been transforming, developing at a rate faster than I gain weight. Haha. A few new malls and several new big hotels now stand in what used to be a virtually flat city proper.

Yet, tourism here is highly organized and synchronized. Almost all sectors of the industry — from the tour guides to tricycle drivers to boatmen — have their own associations, working collaboratively with each other. This combination of infrastructure, organization, policy, and natural wonders make Puerto Princesa an ideal destination even for first-timers, seniors, and children.

By land area, Puerto Princesa is the second largest city in the Philippines. It is also the least densely populated. In 2012, it gained more international attention when the Puerto Princesa Underground River was declared one of the New 7 Wonders of Nature, pushing the number of tourist arrivals to skyrocket and cementing the city’s place as a tourism powerhouse.

It is also a convenient gateway to other parts of the province. El Nido, San Vicente, and even Balabac can be easily accessed from here.

More info you need to know:

January to April. These dry months are the sunniest. However, this period is also the peak season, especially March and April, which are widely considered the “summer” months in the Philippines. For me, the most ideal time to visit Puerto Princesa is January-February. Weather’s still fine but the place isn’t that crowded.

Palawan is located in the western extreme of the country, isolated from most other main islands. It is not in the usual typhoon track (yay). But because it is sandwiched by two major seas, the West Philippine Sea to its north and Sulu Sea to the south, its weather system is a bit different. November sees the start of the dry season for the rest of the country, but it’s still pretty damp in Palawan. Short and passing rain showers are also expected in the afternoon even on some summer days. In fact, on our most recent trip a week ago — and I’m writing this in April, the middle of the supposedly dry season — rain was pouring. So yeah, you can’t really tell, most of the time.

How to Get to Puerto Princesa 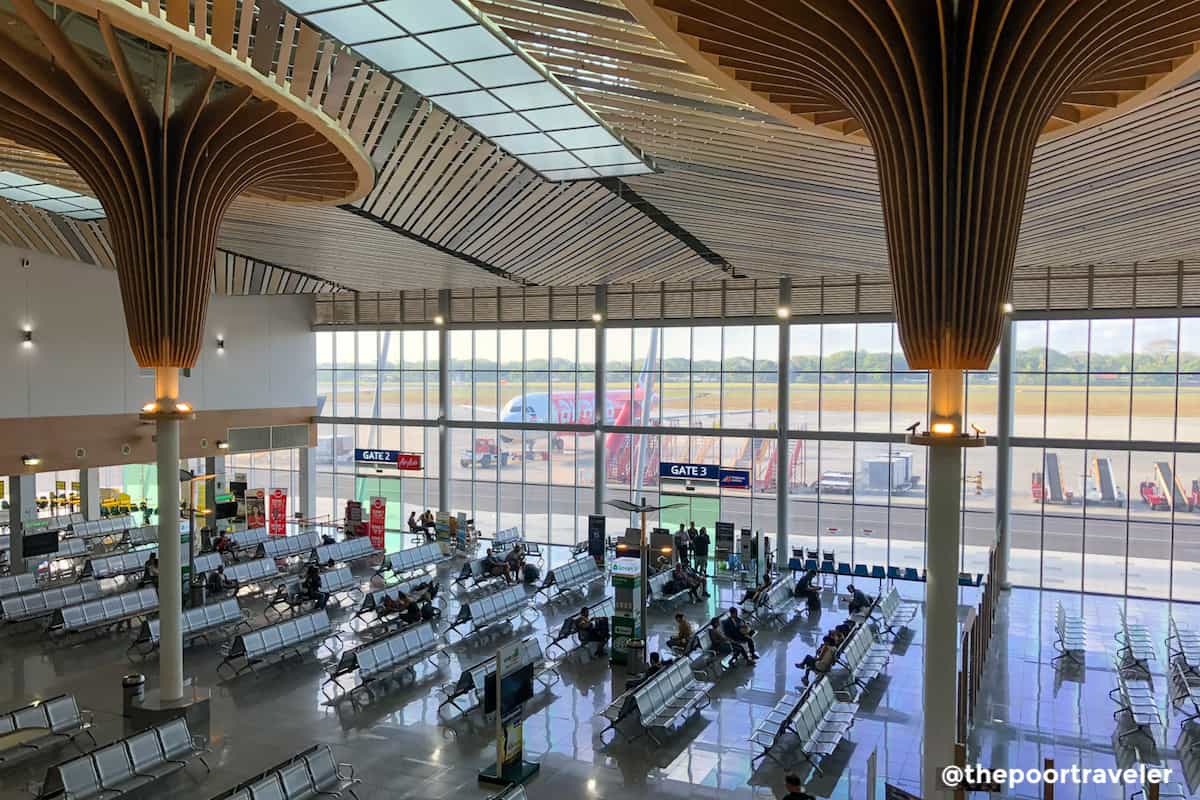 Puerto Princesa (PPS) has an international airport that is now much bigger and more equipped. As a major tourist destination, the city is served by all major local airlines. But the cheapest flights are operated by AirAsia.

Below is a quick random scan of Manila-Puerto Princesa flights on Traveloka. 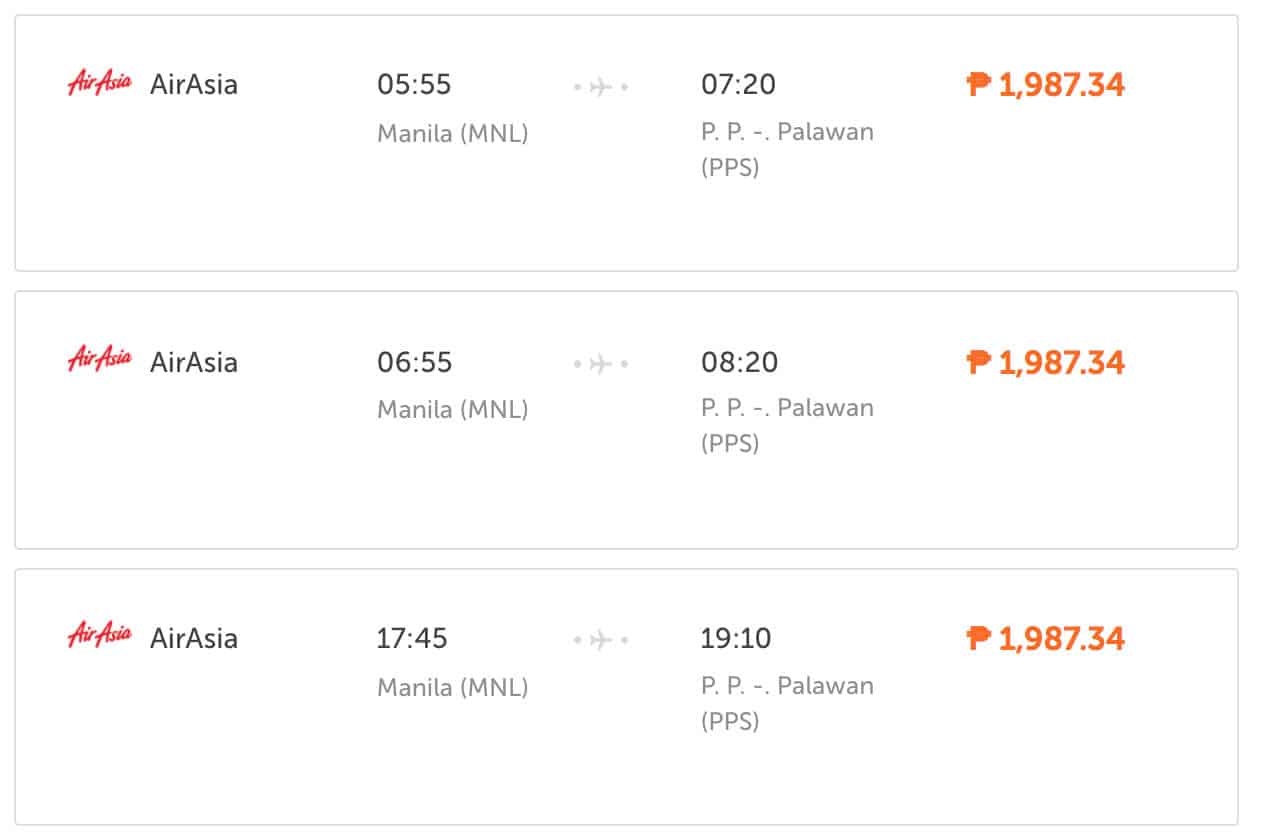 First of all, the Puerto Princesa International Airport is in the city center. It’s smack at the center of the poblacion, so yay! (I have even tried walking from here! It was a loooong walk, though.)

Second, most big hotels and resorts offer free airport transfers so you might want to check with them first. If not, then the cheapest option is the tricycle.

Here are the tricycle fares for journeys from the airport to various parts of the city.

The tricycles are stationed outside the airport vicinity, so you’ll have to walk a little bit to get to them.

Where to Stay in Puerto Princesa

The biggest concentration of accommodations in Puerto Princesa is in the city center. Unless you want to spend the night on an island, then I strongly recommend staying in the city proper so you could also experience the sedated urban vibe. This will expose you to the many restaurants, bars, and shops that the city can offer.

These are the top-rated accommodations on Agoda as scored by their users. 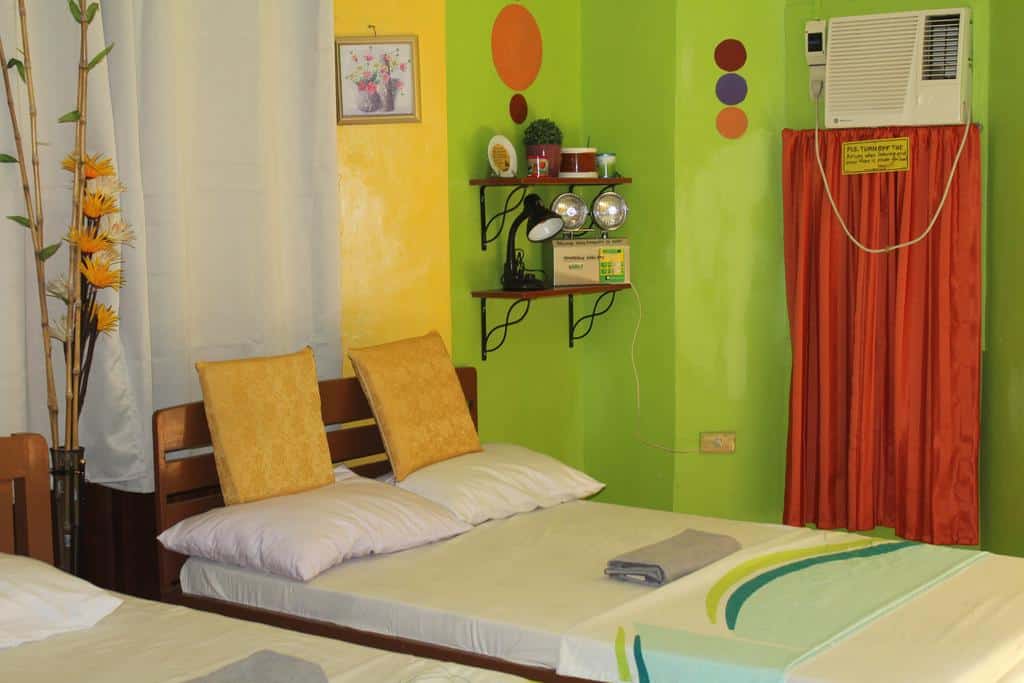 Tourism operations in the city are highly organized. The guides are professionally trained, itineraries thoughtfully composed, and boatmen compliant to both environmental and security guidelines. While it is possible to pull a DIY in Puerto Princesa to lower the costs, most tourists just avail of packaged tours for a more convenient, hassle-free experience.

Below are the best attractions and activities in Puerto Princesa. I also added some links to Klook, where you can book tours easily. If you book with Klook, we’ll earn a little bit at no extra cost to you, so please book using the links below. *wink, wink*

If you can only avail of one packaged tour, make it this one. The number of visitors allowed per day is limited, and guests must register in advance. I suggest arranging with a tour operator for this one if you don’t want to go through the hassle of doing the paperwork and securing a vehicle to Sabang Beach and back.

This tour will take you on a two-hour drive to Sabang Beach, which is the takeoff point to the Subterranean River National Park. Arranged tours cost P1750 to P2200 per person inclusive of a buffet lunch, audio guide, and round trip land and boat transfers.

Travel agencies and hotels usually offer this tour for P1450 per person. Pull a do-it-yourself and you’ll end up saving a lot especially if you’re part of a big group. Take a trike to Lourdes Wharf and ask the driver to pick you up hours later. One-way journey costs from P350.

At the wharf, you can join a group tour or rent a private boat. The boatman will take you to at least 3 islands. Here are the rates:

Last boat leaves the wharf at around 2pm and must be back by 5pm.

You will also have to settle the environmental fees, entrance fees, and cottage rental costs on your own. Here are the rates:

Of course, you can also just join a packaged tour if you want to just relax and not deal with these transfers and fees on your own. Honda Bay Tour rates are usually between P1400 and P1500.

A half-day tour that will show you around some attractions within the city. Tour operators’ price tag on this tour is at P600 per person but you can hire a tricycle instead for P600 per tricycle, which can accommodate up to 4 peeps.

If you prefer exploring in a van than in a tricycle, you can book below.

A night of watching fireflies and the stars. A small boat will take you deeper into the mangrove forest in pitch darkness and the boatman will help you spot these incandescent creatures and identify the constellations above. Pre-arranged tours cost P1000-P1500 per person.

The newest attraction in Puerto Princesa, Kamia Bay is home to the biggest inflatable water park in Asia! Nestled in Binusalian Bay, it can be reached after a 40-minute ride from the city proper. Aside from the giant wipe-out-ish set, you can also join their eco-tours or ride down their bike trails.

The waterpark (aqua park) can be enjoyed for 1 hour for only P300. But you can book a tour package too. Here are the rates:

Lacing a hidden cove 45 minutes from the Puerto Princesa City Proper, it can be reached by taking the bus going north (Taytay/Roxas/El Nido). Alight in Bacungan (P50) then hail a tricycle to get you to Nagtabon Beach (P250, max 3 pax).

However, there’s not that many buses or tricycles passing by the area, so doing it this way can prove challenging. If you’re a group, you can rent a van for only P3500 or a motorbike for P700.

You can also have this included in your usual Puerto Princesa City Tour for an additional fee. Just talk to your driver.

Where to Eat in Puerto Princesa

If traveling on a shoestring, you can always count on the ever reliable carinderias (eateries) throughout the city. Your P100 has a lot of purchasing power and can get you more than a full meal with a drink.

If you’re willing to splurge a little bit, there’s no running out of options. Many big hotels in the city have their own flagship restaurant that highlights their take on a cuisine. For example, Hue Hotel houses Matiz Restaurant and Tapas Bar, which boasts a mostly Spanish menu. Princesa Garden Island Resort and Spa has a dining complex featuring four restaurants including the Golden Elephant Seafood Village, which specializes in Thai food.

But of course, when in Palawan, stuff your face with Filipino dishes. If you’re looking for a modern twist on your Pinoy favorites, go to Best Western Plus the Ivywall Hotel, home to Balayong Restaurant, an open-air dining place with a bar and grill. My teammate Glenn recently had the pleasure of dining there and he’s been raving about it. “Balayong offers interesting new takes on classic Palaweño and Philippine dishes. Under the guide of celebrity chef Sau Del Rosario, some of the restaurant’s must-try offerings include: sinuglaw, the classic kilawin (ceviche) made from grilled pork belly, raw fish, vinegar, chilis, and cucumbers; ‘deconstructed’ pochero; and crispy pork bagnet.”

If you’re after Puerto Princesa classics, head over to Rizal Avenue, which is flanked with a number of must-try restaurants, including the following:

You’ll find them all lined up along Rizal Avenue. You might also want to try those barbeque stalls along the road and have some isaw!

Ready to fly to Puerto Princesa now? Not quite. It’s time to build an itinerary. If you’re gunning for only a weekend trip, you’re in luck. We have already done the dirty work for ya. Here’s a sample itinerary for a 3D/2N getaway, with breakdown of expenses.

Note that this Puerto Princesa itinerary assumes the following:

You can bring the cost down by doing the Honda Bay Tour on your own, which can save you around P500 per person.

If you have more time and funds, I strongly recommend paying San Vicente or El Nido a visit, too.

Other Tips for the Poor Traveler