“You will fall in love with Peru.”

Every single one of my close friends who had gone backpacking in South America said the same thing when they met me for the first time after their trip — that I would love Peru the most. I’m not even kidding or exaggerating. Every single one of them.

And it drives me crazy.

Why? Because even without them saying it, Peru has always been up there on my list of destinations that I would sell my worldly possessions for. and all their wonderful stories are amplifying that voice in my head that screams, “WTF are you waiting for?” Because really, what have I been waiting for?

Peru’s current tourism campaign posits the country as the richest in the world. That may be quite the stretch to some, but wealth isn’t always about money or gold. Often, memories are precious and moments are priceless. Peru, with its unforgettable natural and cultural wonders, is a real treasure trove.

Peru is visa-free for Filipinos. In fact, citizens of a total of 99 countries and territories can visit Peru without a visa. This includes Brunei, Indonesia, Malaysia, Singapore, Thailand and the Philippines, whose citizens can stay for up to 183 days for tourism purposes. Here’s the list of these jurisdictions:

South America is one of the only two continents that I haven’t set foot in. But it looks like that’s about to change soon. I can safely announce as early as now that we’re hitting Peru next year! But while teleportation and time travel are not yet possible, I’m indulging my extremely eager spirit by admiring other travelers’ unforgettable moments, captured in these inspiring photographs.

At 6,768 metres, Huascarán is the tallest mountain in Peru and is part of the Cordillera Blanca range, which is also a part of the larger Andes range. It’s a UNESCO World Heritage Site and is popular among mountaineers, adventurers, and nature-lovers! 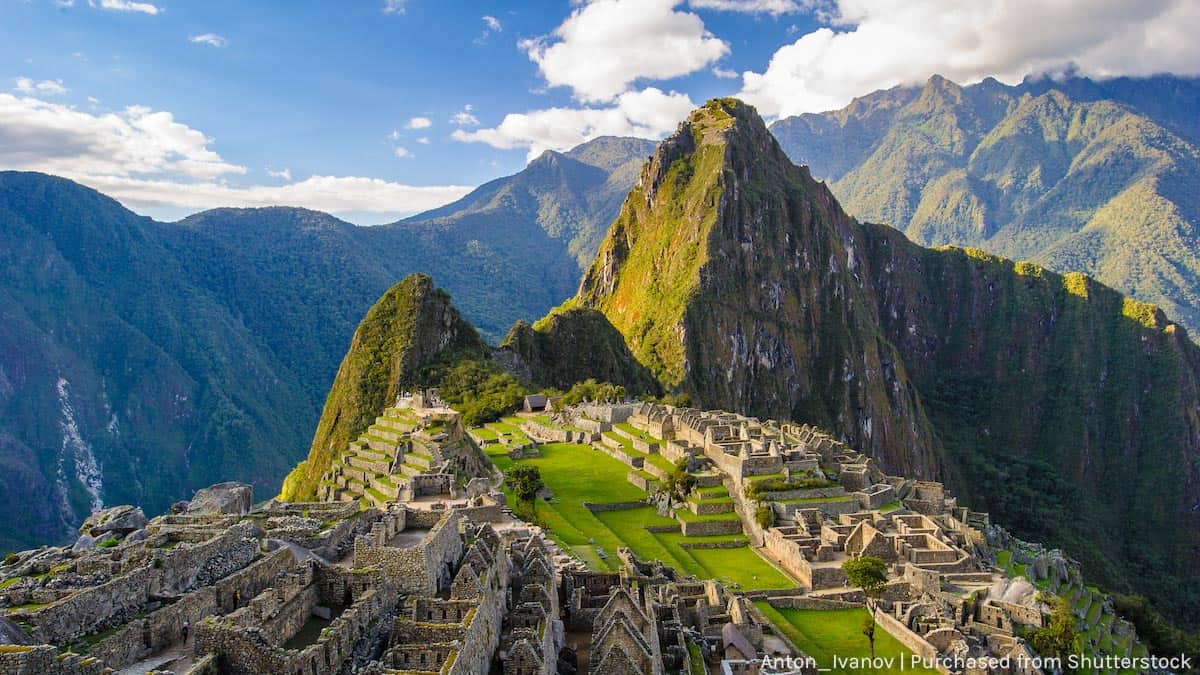 Peru’s most iconic site! This 15th century settlement perched 2430m above the Inca’s Sacred Valley. This UNESCO World Heritage Site was also voted onto the list of the New 7 Wonders of the World.

The Paracas Peninsula is where the desert mingles with the ocean. It’s part of the Paracas National Reservation in the Pisco Province, which is a UNESCO World Heritage Site.

This geologic wonder is notoriously hard to reach, but if you’re the type who likes chasing incredible views, these striped slopes are worth the days of tough trek! These painted peaks are part of the Andes and are accessible via Cusco.

These salt ponds are located in Maras, a town smack in the Sacred Valley of the Incas north of Cuzco. These ponds have been used since the Inca days.

Nazca is where the ancient Nazca civilization settled after the fall of Cahuachi in 400AD and is home to the famous Nazca lines, enormous drawings and geometrical figures on the sand.

A post shared by Peru Luxury & Adventure Travel (@junglewordltravelsluxury) on Jun 19, 2017 at 6:27am PDT

Peru cradles the headwaters of the Amazon, the world’s greatest river. And you can go on a cruise along some of its tributaries, many of which will also introduce to you the wildlife that both the river and the covering rainforests have nurtured.

Lima’s Miraflores District is where many paragliding companies operate. The jump off spot is at Parque Raimonde. Tandem flights cost around 80USD.

Ica is an oasis at the heart of the Atacama dunes. Don’t miss the mummies and other artifacts inside the Museo Regional de Ica.

Arequipa’s historic core is a UNESCO World Heritage City known for its buildings made of white-pink volcanic stones. (Hence the nickname White City.) These stones are called “sillar.” La Ruta del Sillar takes visitors to where these stones were quarried, which will give a better understanding of the region.

Just stumbled upon you blog (nope, did not hurt – haha) while researching Peru! We were supposed to go in August as part of our year-long world trip that was supposed to start in April. You can imagine why that didn’t happen…
But I’m not giving up on my dream to visit that amazing country, especially since I’m an archaeologist!
Thanks for this very cool list as I found some items I had not seen on other blogs yet!

Machu Picchu is on my to-see list, too! After exploring Asia, I’ll head to South America and this listing of other remarkable spots in Peru is incredibly helpful. Am doing DIY travels since 2017 and hope to see more of the world, when the pandemic is over. Thanks for sharing budgetarian tips, Poor Traveler <3

Hi, I’m wondering, how will one fly from Ph to Peru? Is it possible or I have to to through USA first and get a US Visa then from there book a flight to South America? Please help me. Thank you.