Kotor is a gem tucked in the most secluded part of the Bay of Kotor, at the foot of the Lovćen mountain and enclosed by walls that have stood since the 17th century. Earning two UNESCO World Heritage Site recognitions — as Natural and Culturo-Historical Region of Kotor and as part of the Venetian Works of Defense (15th to 17th century) — the fortified city attracts wave after wave of visitors that grows bigger over the years.

Almost all of the significant cultural landmarks and attractions are cradled within the walled Old Town. The pederstrian-only historic center is easily navigable on foot, and cars are not allowed inside. Kotor is also surrounded by several equally magnificent destinations!

Without further ado, here are some of the things to do and places to visit in Kotor. We also included a few day trip destinations from the city, in case you are planning to spend more than a day here.

Whether you are visiting on a day tour or staying overnight in Kotor, a walking tour around the Stari Grad (old town) is a perfect introduction to how Kotor came to be. You can do it on your own or you can join a guided walking tour.

If you want more information about the places you are going to visit, the best option is to join a FREE walking tour, which is tip-based. You will decide how much you will give depending on the service of the local guide. 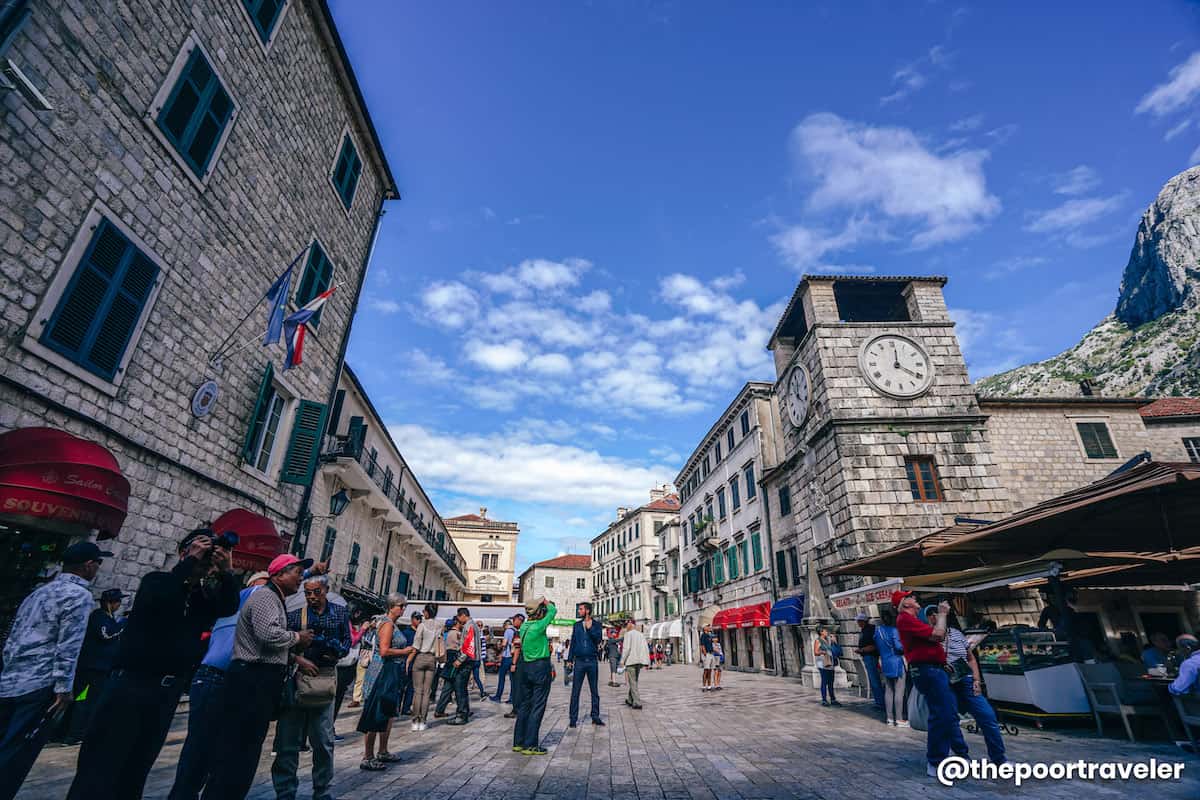 Here are some of the sightseeing tours:

The tour usually starts at the Square of the Arms, near the southwest and north city walls.

The old town of Kotor is a triangular area bordered by ancient city walls with reinforcements like towers, ramparts, and bastions. These walls’ origin can be traced back to the Medieval period, but a strong Venetian architecture is apparent. 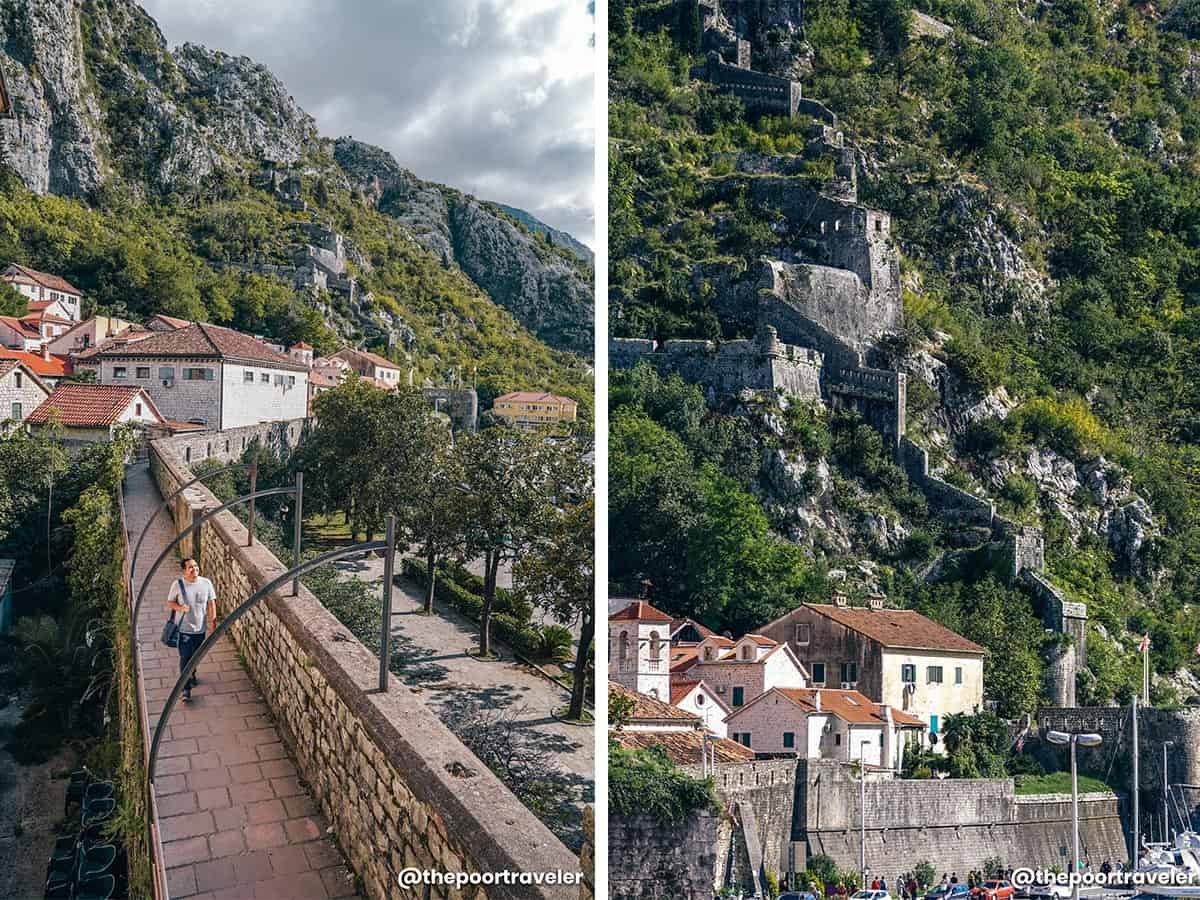 The Sea Gate, which faces the Bay of Kotor, is the main gate coming from the Port of Kotor. Not too far from the Sea Gate, the Kampana Tower is located near the Scurda River’s outflow into the bay. It provides a scenic view of both the river and the bay.

The River Gate is located in the north, near the Bembo Bastion, which was converted to an open-air theater. The Gurdic Gate is situated in the south and built near Gurdic Bastion.

The wall stretches up 250 meters high all the way to the Fortress of San Giovanni (St. John Fortress), perched atop the adjacent hill.

In the east, the old town is protected by St. John Mountain. The ramparts from both Bembo and Gurdic bastions form a hiking trail to the mountain, presenting different perspectives of the old town and the bay from various viewpoints. 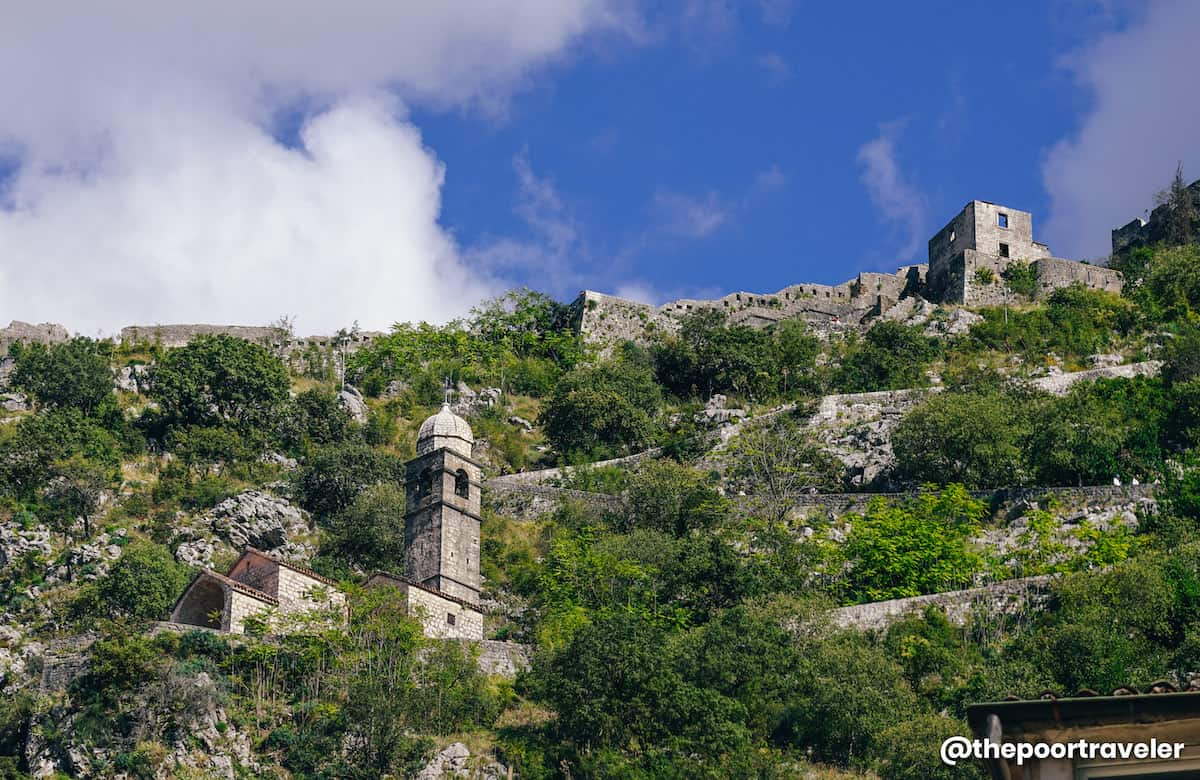 On the way to Kotor Fortress, you will pass by the Church of Our Lady of Remedy, the Old Town Road, and the Ladder of Kotor.

Should you decide to hike, note that there are over 1,000 steps and a steep trail, but of course, you can pause and rest. Wear comfortable shoes and bring lots of water. The best time to hike is in the morning and late afternoon. The average hike duration is two hours.

Kotor Beach is located in the town of Dobrota, a separate settlement, but still popularly considered part of Kotor bu default. Most of the residents of Kotor are in Dobrota.

Kotor Beach is a roadside public beach. It’s a pebble beach with clear waters. There are food places near the beach where you can enjoy the view of the beach if you don’t plan to swim. It’s just a short drive from the old town.

If you don’t mind walking, you can reach it in about 10-15 minutes from the Port of Kotor.

5. Kayaking and Other Water Activities

The eastern coast of the Bay of Kotor is dotted with several companies and agencies that offer kayak rental and tour services and other water sports activities. A few of them also have offices within the old town proper. 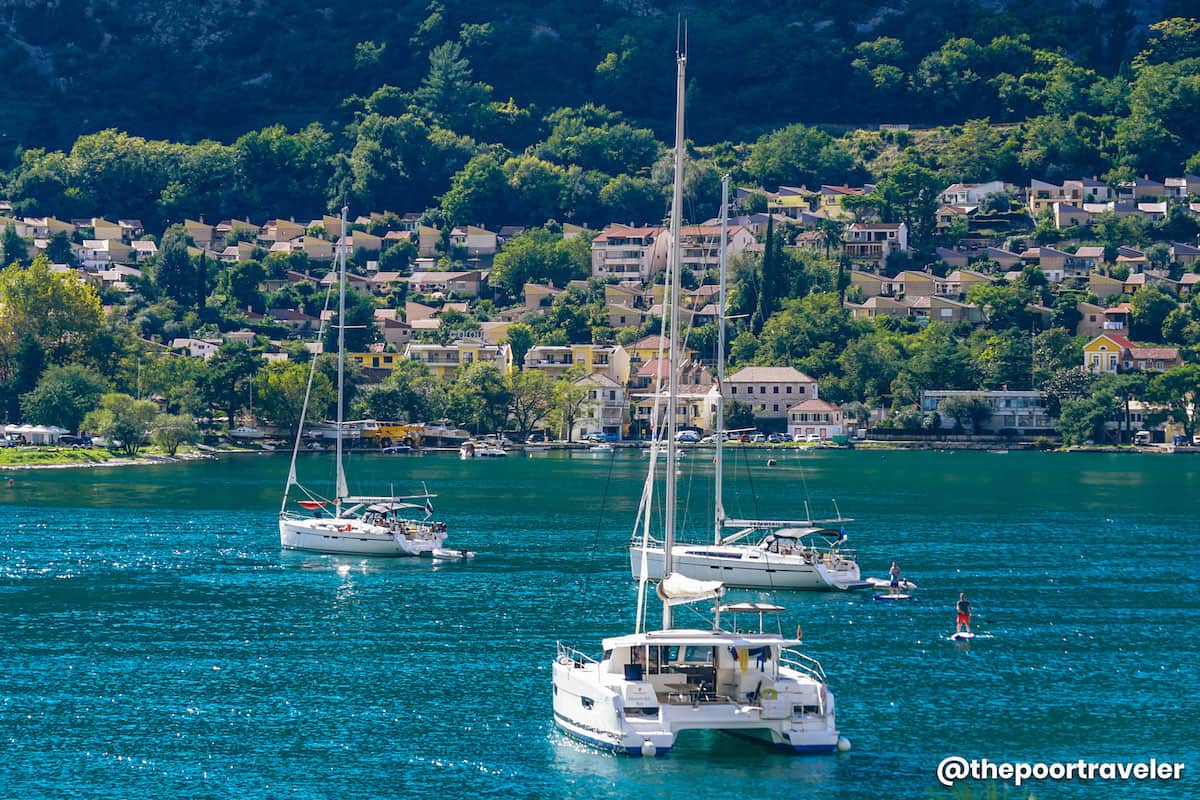 You don’t need to be highly skilled to go kayaking around the bay. These companies will have a safety briefing before setting off. You may even book a guided kayak tour, so you can also learn more about the landmarks you will spot along the way. Other activities offered aside from kayaking are stand up paddleboard, sailing/cruising, and canoeing among others. 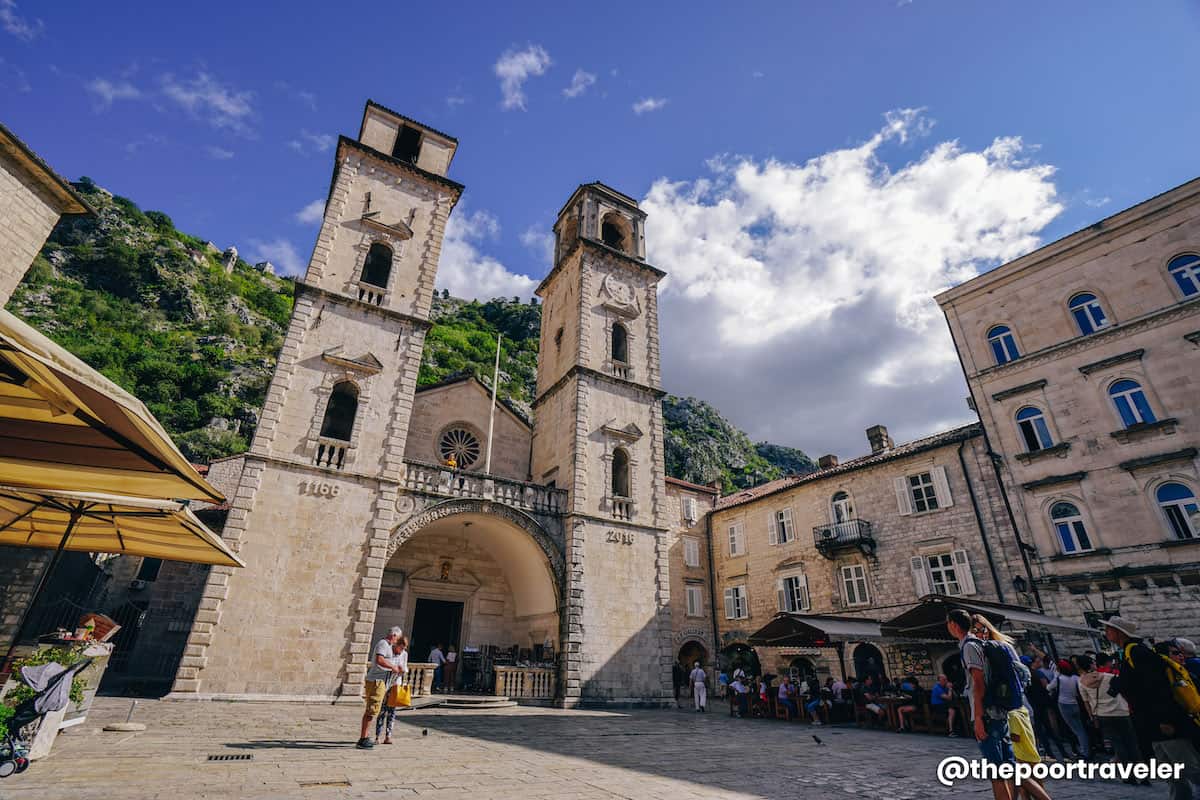 Kotor Cathedral is the symbol of the city and the seat of the Catholic Bishop of Kotor. Completed in the 12th century, it is dedicated to Saint Tryphon, the patron saint of Kotor. It has undergone several restorations after being damaged by earthquakes in 1667 and 1979.

One of the oldest Catholic churches in Europe, the cathedral houses valuable religious artifacts. Don’t miss climbing up the second level to the Sacral Art Museum where you can also see the remains of saints apart from the paintings and other relics. The Romanesque church is also famous for its frescoes and the silver and gold reliefs. The cathedral is one of the most visited landmarks in Kotor. It is located in the southeast corner of the Old Town. 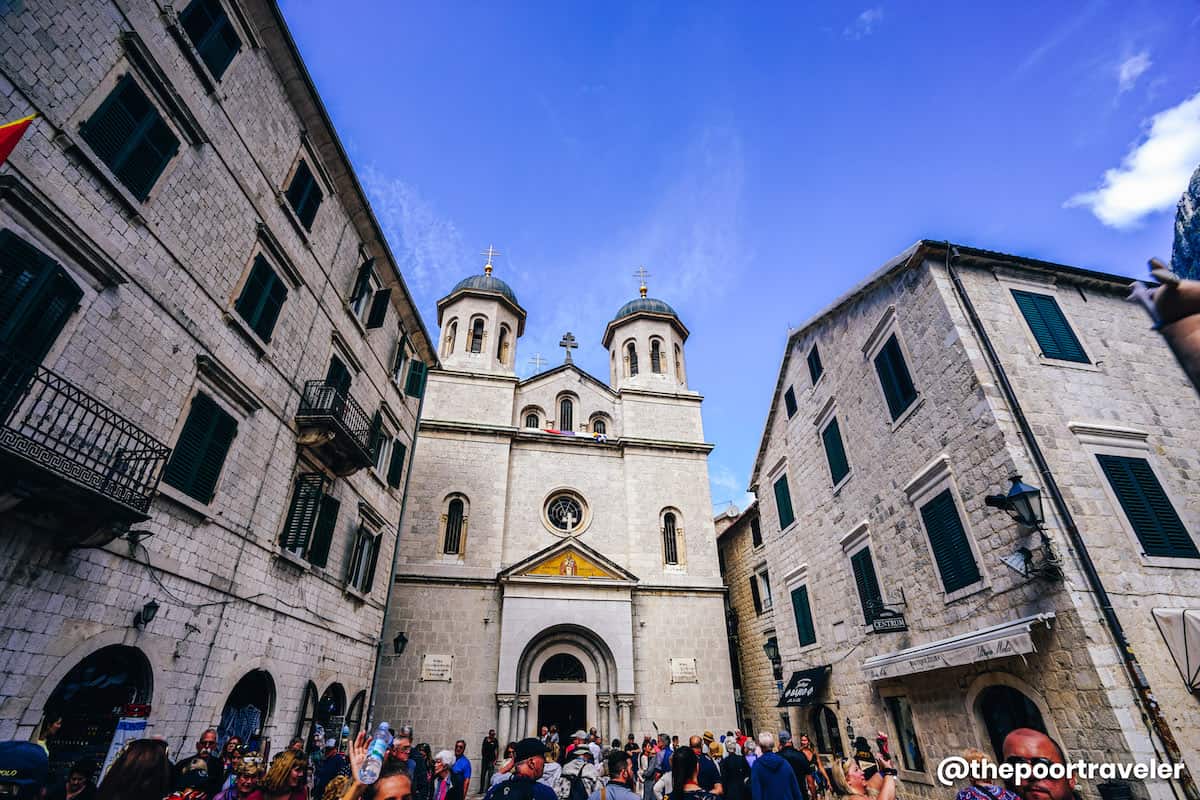 The present structure was completed in the early 20th century, but the original structure was built in the early 19th century until it was destroyed by a fire in 1896. The orthodox church is located at the Orthodox Square in the north border and is a short walk from the Square of Arms. Its treasury features ancient relics, orthodox arts, and icons.

If you want to visit another Orthodox church, St. Luke’s Church is also located at the square.

You will find traditional Montenegrin dishes in Kotor. The food culture in Montenegro is a combination of Mediterranean and Balkan elements. 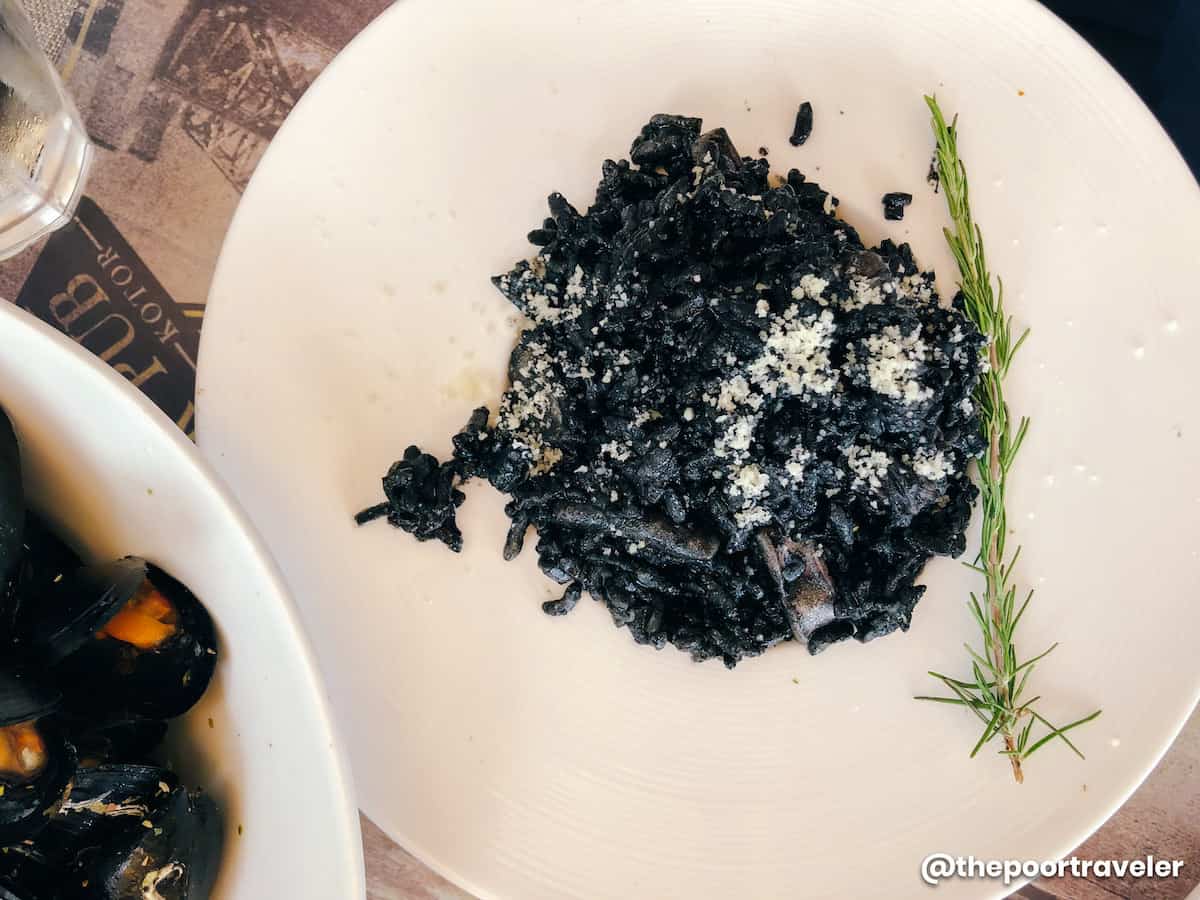 Being a coastal town, the hero ingredient is seafood, but Kotor heavily incorporates herbs and spices like garlic, parsley, lemon, rosemary, and basil. You will also find stew, cheese, tapas, meat, and bread. Some signature dishes include: fish thick soup (usually made of trout), njoke (pasta), and frustula (sweet crunchy cookie).

Located at the heart of the Old Town, the Maritime Museum narrates Kotor’s long history as a coastal town, trading port, and a naval base, particularly during the First World War.

The museum was founded by the Boka Marine Fraternity in the late 19th century. It was officially launched to the public in 1900. The structure that currently hosts the museum is a Baroque palace formerly owned by the Grgurina family. It was converted into a museum after World War II. The operation halted after the building suffered from the earthquake in 1979.

Hailed as the cat capital of Montenegro, Kotor is heaven for cat lovers!

It’s easy to spot these feline cuties doing what they love to do — lounging, stretching, strolling, well, you get the idea. These cats are well taken care of and are revered in CAT-tor. The existence of the Cat Museum is proof that they are part of the community.

The museum is located near the Sea Gate. The building is modest, but it is one that will fill the day of cat enthusiasts with cuteness (and sassiness). Aside from the cat-related memorabilia, there’s also a shop where you can buy some souvenirs.

Kotor is a good jumping-off point to other attractions in Montenegro, especially around the Bay of Kotor. Dubrovnik is one of the major cities that is directly linked to Kotor by bus. If you are spending more than a day in town, here are some of the day trip destinations from Kotor. 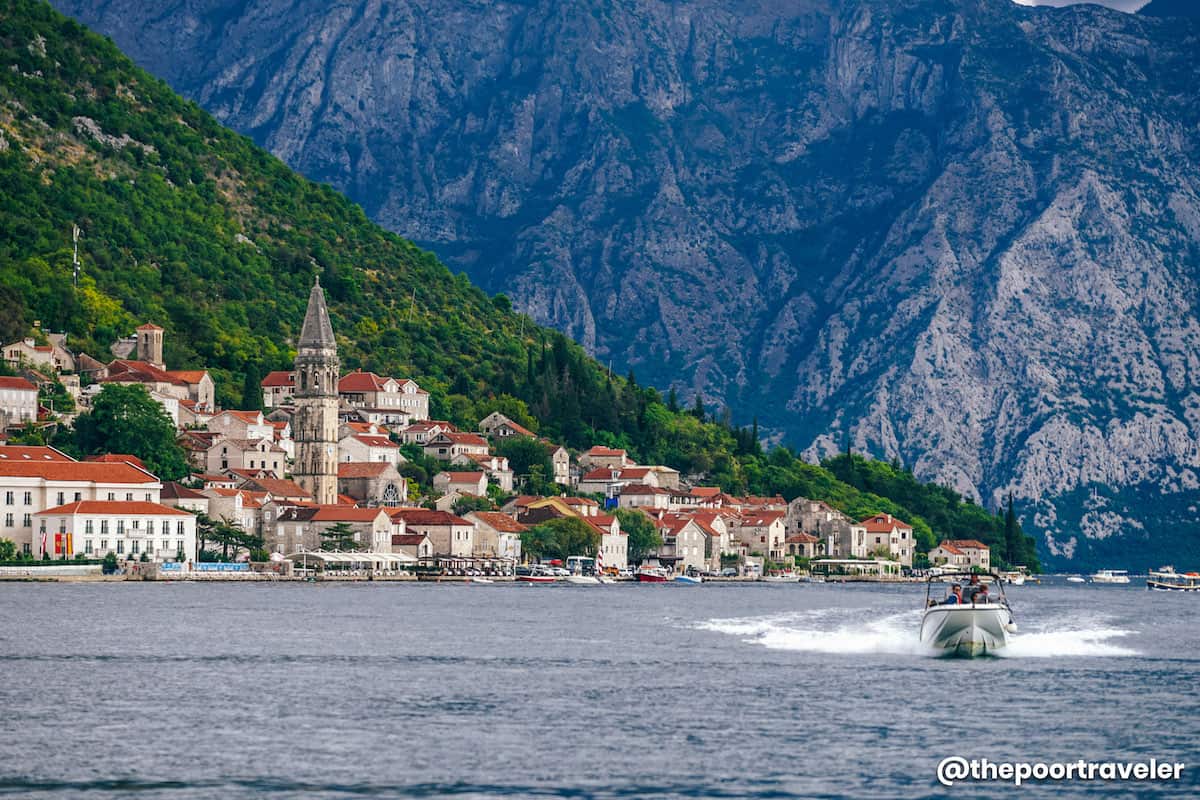 Perast is another well-preserved historical town in Montenegro, just a few kilometers northwest of Kotor. It is known for its ancient churches and palaces.

The quaint town stretches for about one kilometer along the Bay of Kotor. Its main street runs parallel to the coastline. From here, you can easily access two famous Montenegro islets — St. George Island and Our Lady of Rocks. These two are also visible from the town’s main street. 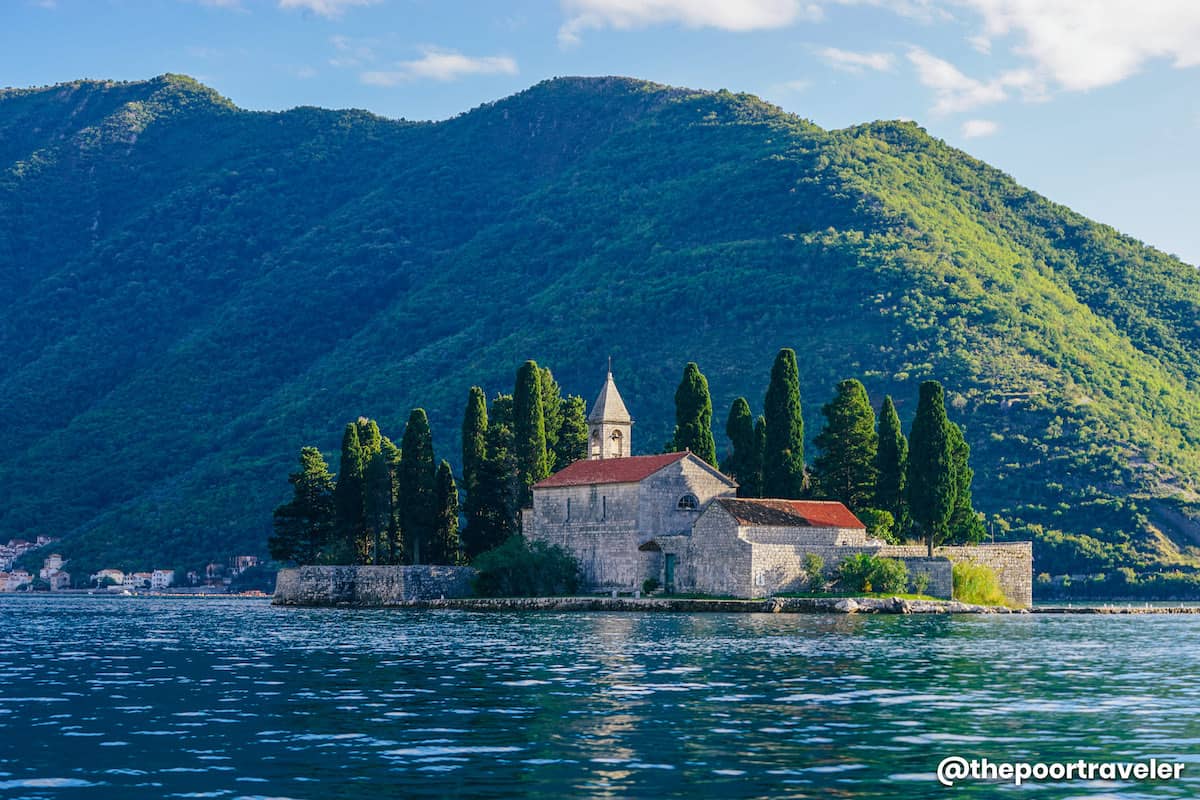 If you are visiting during the summer season, expect the town to get crowded with tourists. Other significant landmarks are Perast Museum and Saint Nicholas Church.

The Bay of Kotor, locally called Boka, is fringed with medieval villages and waterfront villas, painting a scenic tableau of nature and history. 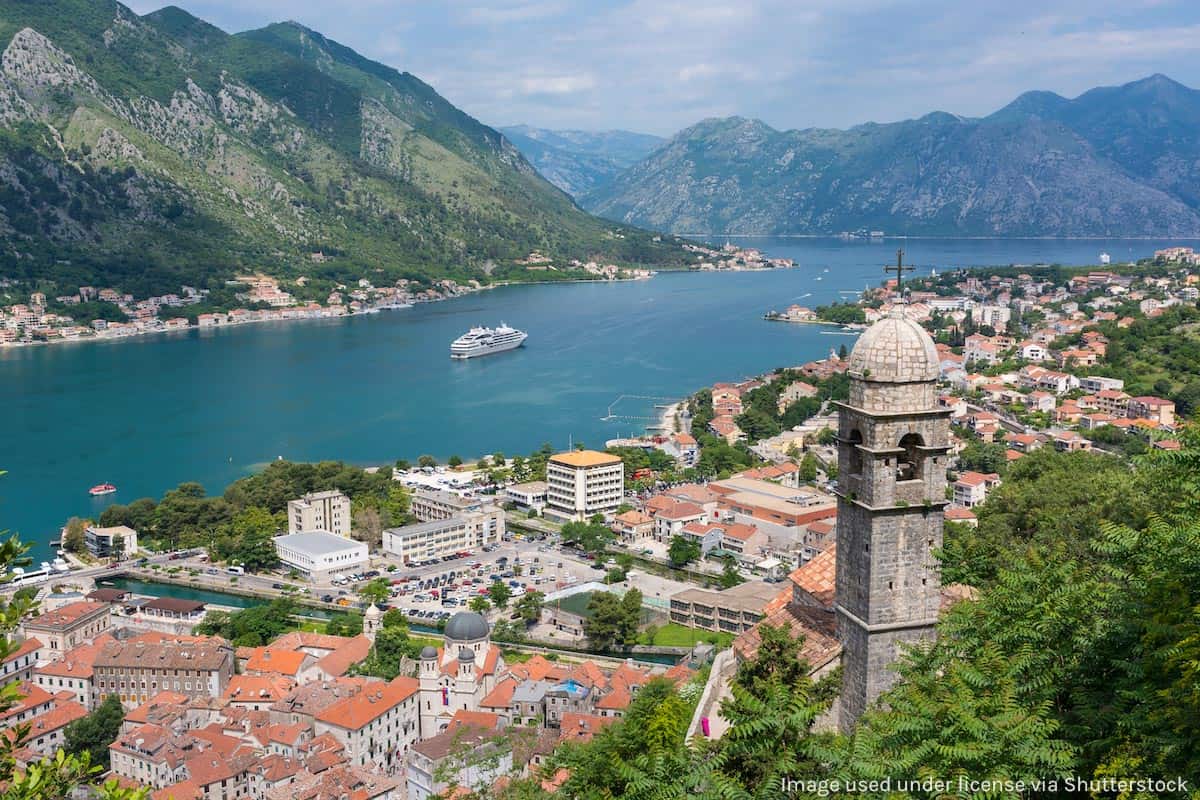 Kotor is where you can board cruises around Boka Bay. This is one way of sightseeing — sweeping past the towns adorning the bay’s coast. The coves, beaches, and islands are also included in the itinerary, depending on the type of package.

The itinerary usually includes a visit to or a closer view of St. George Islet, Our Lady of Rocks Islet, the fortified Mamula Island, and the Blue Cave of Montenegro, which is located near the entrance to the Bay of Kotor from the Adriatic Sea.

Declared a national park in 1952, the Durmitor National Park is the largest protected area in Montenegro. It covers lush pine forests, rivers, canyons, mountain peaks, glacial lakes, and endemic flora and fauna sprawled in northern Montenegro. It was also listed in the UNESCO World Heritage Site in 1980.

The national park provides adventure seekers and nature lovers with endless thrilling activities in summer and winter. Hiking, canyoning, and mountaineering are popular activities during the summer season.

Tara Canyon is one of the most popular spots with river rafting as the key tourist activity. Skiing and snowboarding are kings during the winter season. Most of the tour agencies and tourist facilities are based in the town of Žabljak.

Situated in the central region of Montenegro, this 17th-century Orthodox two-part monastery features cave churches niched high up on the Ostroška Greda cliffs.

It is the most visited Orthodox monastery in the country. Saint Basil of Ostrog, whose remains are buried here, is the central figure of the monastery.

Entrance Fee: FREE, but if you like to donate, you can. Not mandatory.
Opening Hours: 6:00 AM – 5:00 PM (May – September), 5:00 AM – 4:00 PM (October – April)
Getting There: From Kotor, you need to go to Podgorica first. From Podgorica, take the train to Ostrog Station. From there, it will take you about an hour to the monastery on foot. You can take a taxi from the train station. The most recommended is to join a guided tour. 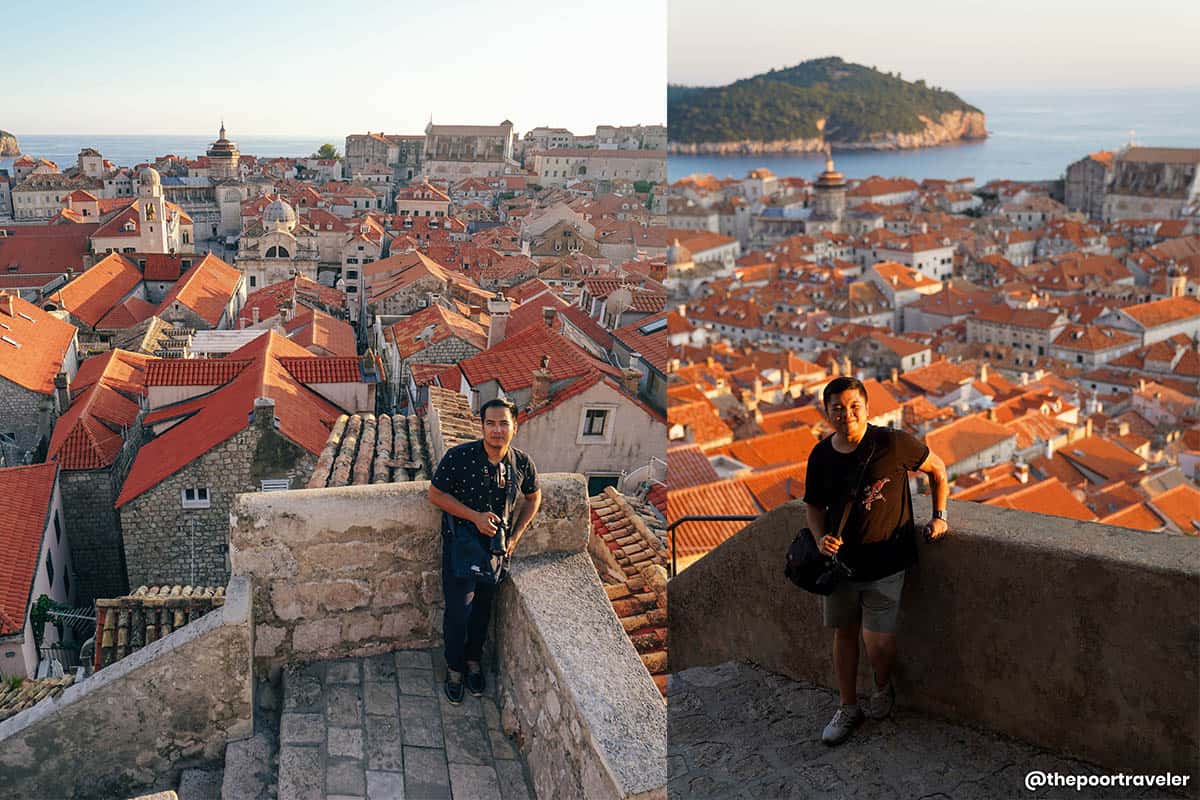 Jutting out of the eastern part of the Adriatic Sea, Dubrovnik is one of the major cities in Croatia. The city offers a wide array of tourist attractions: water-related activities like beaches and islands and cultural and historical sites clustered within the old town.

Game of Thrones fans will have a field day here as it is most prominently used as King’s Landing, the capital of the fictional Westeros or Seven Kingdoms. It’s where many of the HBO series’ most unforgettable scenes were filmed including the Walk of Shame and the Battle of Blackwater Bay.

Once in Dubrovnik, you can easily join a walking tour.

✅ BEST THINGS TO DO IN DUBROVNIK!

Wow! I knew the Balkans boast some spectacular scenery but I never imagined Montenegro would be this pretty. Thanks for this comprehensive post.

And it’s pretty cheap too! (At least by European standards. haha)