Being one of the smallest European states, Slovenia is relatively easy to explore. In fact, it’s possible to take only a day traveling from one end to another. The capital city, Ljubljana, is situated at the heart of Slovenia, making it a crossroad and a convenient base for most travelers planning to visit other parts of the country.

Here are some of the day trip destinations from Ljubljana. If you want to cover Lake Bled, Predjama Castle, and Postojna Cave in one day without worrying about the transportation, you can book a guided tour. Klook is offering this tour inclusive of hotel pick up and drop off, transportation, English-speaking guide, admission fees, and boat ride to Bled Island.

If you want to spend a longer time per destination, you may also opt to tackle them individually. These can be reached by train or by bus from Ljubljana, but we also included the Klook links to the tours per site if you want to just relax and not worry about how to get there.

Located at the foot of the Julian Alps, Lake Bled is one of the most visited places in Slovenia. Strolling around the lake will reward you with different views of other attractions in the lake’s vicinity such as the Bled Castle. This imposing 11th-century structure is the country’s oldest castle. From here, you can get a fetching view of Bled Island, the iconic feature of the lake.

The island is dominated by the 17th-century Assumption of Mary Church. Out of all the structures on the island, this one is the most important. It’s root traces back to the 9th century. It’s possible to reach the island by boarding a traditional canoe. You can also try a local dessert, kremšnita, which is a type of custard cake. 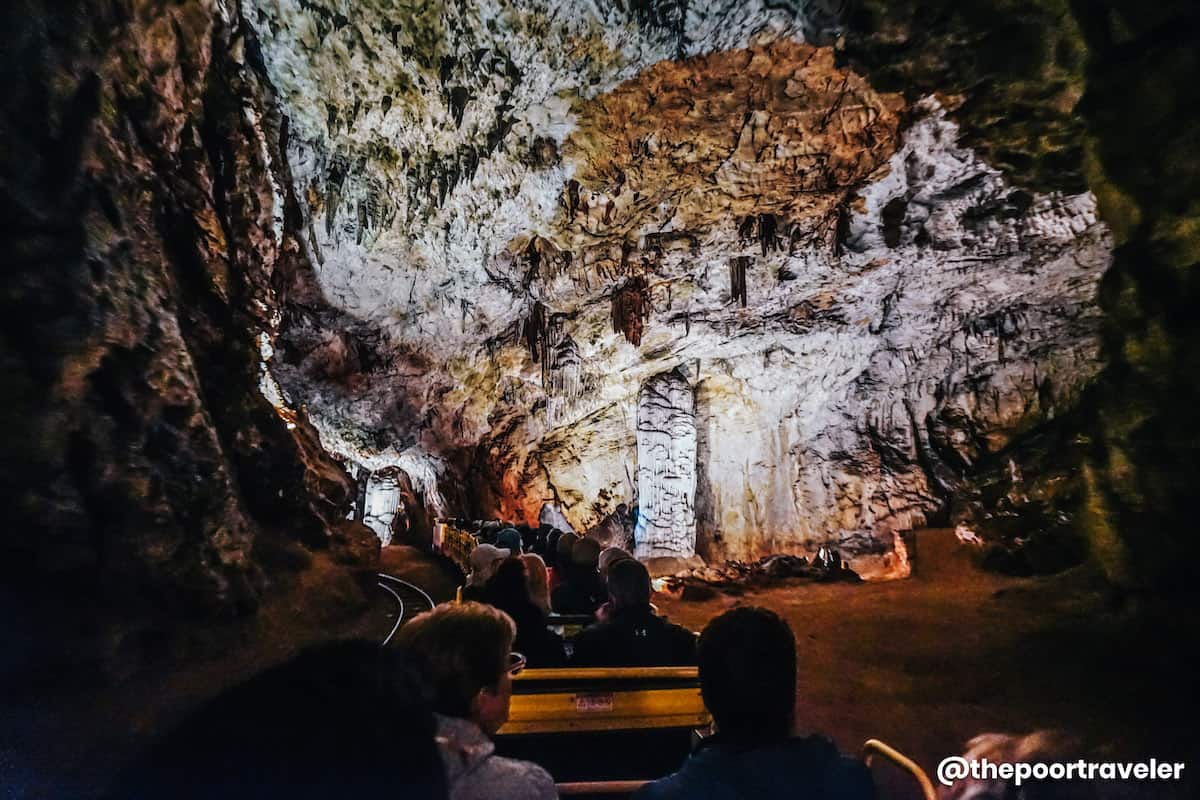 Stretching over 24,000 meters, the Postojna Cave carved its place in the record books as the second longest cave system in the country. Shaped by the Pivka River, this karst cave boasts incredible rock formations such as the five-meter stalagmite, Brilliant, which has become the most notable feature of the cave. One of the halls showcases its textured ceiling created by the thousand of stalactites that resemble thin noodle strands.

The cave is so extensive that it has its own train shuttling tourists to different spots inside like the Concert Hall and the Big Mountain Hall.

Nearest Train Station: Postojna Station. The travel time from Ljubljana to Postojna is about an hour. The fare is €5.80. From the station, ride a bus or taxi to the cave.

If you want to tick-off both Postojna and Predjama Castle in one go, you can book a half-day tour from Ljubljana. 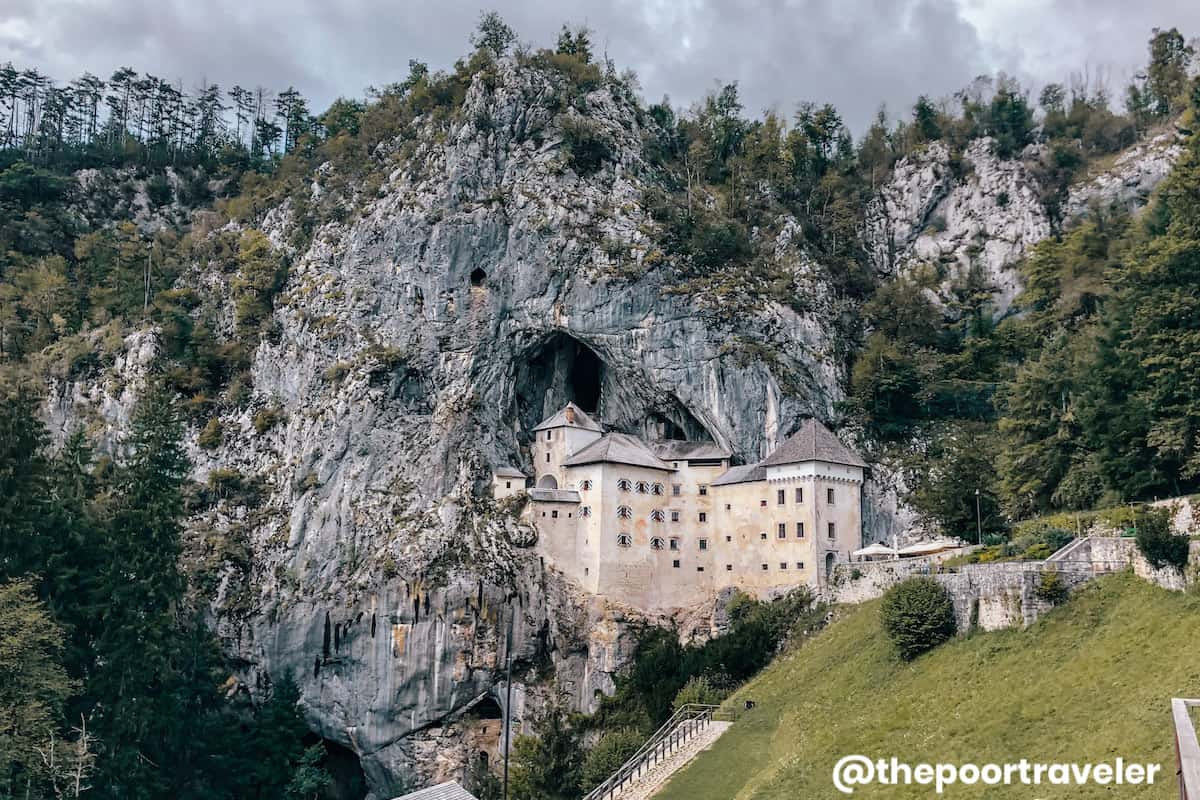 The castle still stands out for its peculiar design and location — an imposing structure built in the mouth of a cave. The earliest record mentioning the existence of the castle is dated in 1274, but the exact date of its construction is yet to be determined. There are many stories surrounding the castle. Some say it’s haunted; others say that it became the headquarters of a notorious robber knight, Erasmus of Lueg.

Some travelers choose to do a combination tour of Predjama Castle and Postojna Cave because they are close to each other. Many tour operators are also offering this combo from Ljubljana. If you are pressed for time, you can opt for this tour instead of a full-day Slovenia tour.

Housing one of the world’s biggest underground canyons, Skocjan Caves is home to a unique ecosystem. Because of its ecological value, sheer natural beauty, and historical and cultural significance, it has been listed as a UNESCO World Heritage Site, proving further that it’s one of the world’s important cave systems.

Nearest Train Station: Divaca Station. From there, you need to take a bus to the caves. The bus usually departs at 10AM, 11AM, 2PM, & 3PM, but this may change depending on the season and without prior notice. The travel time from Ljubljana to Divaca is about an hour and a half. The fare is €7.70.

If you want to visit Skocjan Caves with other destinations in Slovenia, you can book this tour with Klook that also includes a stop at Piran, a medieval coastal town, Predjama Castle, and the Lipica Stud Farm.

Named after the highest peak in the area, Mount Triglav, the national park is the largest protected area in Slovenia. It is also the one and only national park in the country since 1981. Located northwest of Ljubljana, Triglav National Park encompasses a large portion of the Julian Alps, numerous fertile valleys, glacial lakes, waterfalls, and two major river systems — Soča and Sava.

Travelers can commune with nature by taking any of the multiple trails meandering through the park. Outdoor activities within the premises are also offered by tour operators. The most popular features are Boka Falls and Lake Bohinj. The former is the highest waterfall, while the latter is the largest in the park.

Tour operators have packages that include Triglav National Park in the itinerary along with other nearby tourist attractions like Lake Bled and Radovljica.

Radovljica is located northwest of Ljubljana and southeast of Bled. This quaint town lies along the Sava River. Its history traces back to the 13th century and some structures are reminders of centuries past. Linhart Square is said to be one of the most beautiful old squares in Slovenia. As the old town center, a good number of accommodations, restaurants, and museums operate around it. Other notable landmarks are the municipal building, which reflects one of the town’s main industries — apiculture (beekeeping).

Nearest Train Station: Radovljica Station. The travel time from Ljubljana Station to Radovljica is about an hour. The fare is €4.30.

You can visit other nearby spots like Triglav National Park and Lake Bled when you book a tour that includes Radovljica with the aforementioned destinations.

Slovenia also has a lucrative wine-making industry. Located several kilometers west of Ljubljana, right at the border with Italy, is Brda, also referred to as Goriška Brda.

The hilly town is carpeted with vineyards and sweet cherries. It is actually hailed as the wine and cherry capital of Slovenia. These two are the main economic drivers of Brda. Most of the residents thrive on wineries and cherry productions.

The most famous producer/exporter of Slovenian wine is Goriška Brda Wine Cellar. The company also offers wine-tasting tours. Try their signature orange wines! Other famous sites in the area are Dobrovo Castle and Smartno Village.

Nearest Train Station: Plave Station. Note that Brda has no railway services, so this is the nearest that you can get from Ljubljana via train. From here, it’s quite challenging to get public transportation to Brda. The best option is to take the bus from Ljubljana with a bus change at Nova Gorica to Dobrovo or you can just book a tour.

The Slovenes settled in the Julian Alps area some time during the 11th century. The Julian Alps covers an area stretching from Italy to Slovenia. The highest point in Slovenia being Mt. Triglav, measuring 2,864m.

Kranjska Gora is more popular as a winter sports destination because of its stunning landscape and location in the Julian Alps. If you are into winter sports and extreme outdoor activities, this might interest you as a day trip destination from Ljubljana.

Nearest Train Station: Jesenice Station. From here, you can take a bus to Kranjska Gora (30 minutes). From Ljubljana to Jesenice station, the travel time is about an hour and a half. The fare is €5.80.

You can book a tour that also includes attractions such as the 17th-century Liznjek House and the Planica Nordic Centre. You’ll also get a chance to eat a traditional Slovenian dish.

Vintgar Gorge lies between Gorje and Bled. The 1.6-kilometer gorge meanders between Hom and Boršt hills, boasting canyon wall that can go as high as 100 meters.

There are wooden bridges and walkways that terminate at one of the trip’s highlights — Šum River Waterfall, the largest of the three in the country. The scenic trail is the nearest gateway to the Triglav National Park if you are coming from Bled. The entrance fee is €10 per person (€2 for kids). The schedule may vary depending on the season, but it usually starts at 8AM and closes at 6PM. During summer, it’s 7AM – 7PM; winter schedule is 9AM – 4PM.

Nearest Train Station: Lesce Bled Station. From Ljubljana Station, the travel time is about an hour and the fare is €5. From Bled, you can take a bus to the Vintgar Gorge jump-off point (10 minutes).

The Soca Valley covers the picturesque Soca River, Bovec, Kobarid, and the area between Triglav National and Nova Gorica.

Nearest Train Station: Most na Soči Station. From Ljubljana Station, this requires a train transfer at Jesenice Station to Most na Soči. The travel time is about three hours, and the fare is €7.70. Buses also operate between Ljubljana and Most na Soči five times daily.

Located northeast of Ljubljana, Maribor dominates the eastern Slovenia landscape, being the largest city in the region. It also plays an important role in the region as its economic, cultural, and political hub. The city’s history dates back to the 12th century. Its landscape is also characterized by hills and vineyards.

Other iconic landmarks are the 15th-Century Maribor Castle, the first Maribor Castle atop the Pyramid Hill, and Betnava Castle. In winter, you can check out Mariborsko Pohorje, the city’s ski resort.

Nearest Train Station: Maribor Station. There are direct train routes from Ljubljana to Maribor. The travel time is 2.5 to 3 hours. The fare is €9.60.

Nestled in a peninsula, Piran is a major tourist destination. The coastal city’s western border faces the Adriatic Sea, while the northern border meets the Gulf of Trieste.

The town fosters a strong medieval village atmosphere with its narrow streets and most buildings’ architectural style. Some of the noteworthy sites are Tartini Square, Tartini House, St. George’s Cathedral, Piran Town Hall, and the 7th-century Walls of Piran.

If you’re staying in Ljubljana as your base, here are some of the top properties in the city, as scored by Agoda customers.