I honestly thought I was going to die.

When I reached the top, I dropped to the ground and mustered all the energy I had left to catch my breath. I was vomiting air. My head felt light, pulsating in pain. My chest was starting to tighten. Not here, I said to myself. I had just climbed what many call, aptly, “Heart Attack Hill,” part of the trail around Kings Canyon in the middle of the Australian Outback. The nearest hospital is hours away. Not here.

Thankfully, it wasn’t a heart attack. It was probably just overfatigue and dehydration because 10 big gulps of water later, I began feeling alright. It wasn’t even my water. I finished my bottle before I left the hotel hours ago. That climb kept me grounded both figuratively and literally. This was the first time I experienced something like this. I remained seated on the rocky ground, wondering how, after so many years of traveling, I was still careless and awfully unprepared.

When we pack for a trip, we usually just think about clothes, toiletries, gadgets. When we research, most of us simply check the weather and take note of directions. Too often, we forget about safety, we forget about our health. It’s surprising because we all know this: Nothing is more inconvenient than falling victim to an illness, attack, or accident when you’re far away from home.

We have more than our share of scares during travel. In this post, we’re listing down things that we always take for granted but shouldn’t because they could save our lives!

Dehydration is a real threat when traveling. That’s why we always advocate drinking lots of water. It’s a must-have for us when we know we’ll be walking for hours in hot places or when trekking or climbing a mountain.

But sometimes, a bottle of water isn’t enough. Backpacking can be a strenuous activity. Walking around in the heat with 30 kilos of luggage on your back is exhausting. Even something as seemingly harmless as sightseeing can take a toll on the body. Walking or biking under the sun FOR HOURS can be quite draining. You easily lose water as sweat — as much as 1.4 liters per hour — during heavy exercise, and along with it are minerals that the body need to function properly. Dehydration affects brain-to-muscle communication, too. 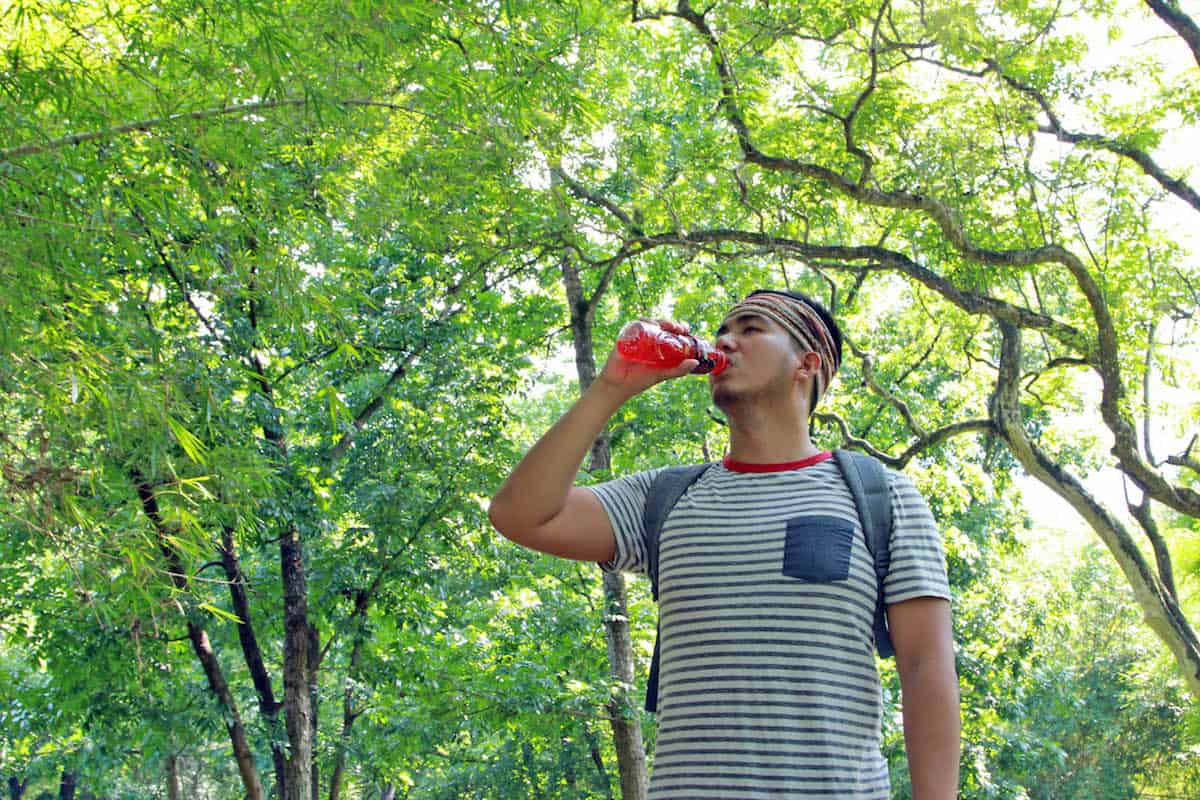 After what happened to me in Australia, I have learned to always bring Gatorade when we know we have a demanding day ahead. Gatorade has electrolytes — sodium, potassium, among others — that help retain the water in the body, so not only are you replacing the lost fluids, you’re also keeping it in longer. It also has optimal 6% carbs that give energy to working muscles. It’s actually why Gatorade was invented in the first place. In the 1960s, a group of scientists at University of Florida College of Medicine investigated why athletes suffered from dehydration-related illnesses. They found their answer and developed Gatorade to combat that by rehydrating, replenishing lost minerals, and refueling muscles.

Coconut juice is good, too, but it’s not widely available everywhere. It also spoils easily.

I loved the outdoors even as a child. I enjoyed camping with friends. We would just bring a tent to the beach or the woods, and we would stay there. But when I was 11, one week after another camping trip, my friend and I were both rushed to the hospital because of constant, high fever rashes, and nose bleeding. Apparently, we had Dengue Fever. We were confined in the hospital for 10 days, until our platelet counts fully recovered.

But mosquitoes, the deadliest in the animal kingdom, just won’t leave me alone. I had contracted dengue three more times after that! Imagine! But this time, I have learned my lesson. Dengue isn’t the only disease that mosquitoes carry so I have developed a habit of bringing insect-repellent lotion whenever I travel.

I’d been incredibly lucky that in all instances, I was home when most of the symptoms appeared, so I had easy access to the hospital. Imagine being in the jungle or in a remote village while suffering from it.

Yet, mosquitoes are not confined in the wilderness. They’re everywhere: bus terminals, parks, eateries. It’s good to always have something to repel them.

Some airports and airlines do not allow insect-repellent lotion onboard. But you can easily find them in your destination. All it takes is a quick visit to the grocery, pharmacy or even sari-sari store.

Siem Reap, Cambodia. On the way back to the hotel from Angkor Wat, I crashed and fell from my bike, leaving me with two shallow but wide wounds on my left leg. But that wasn’t the hardest part. I was traveling alone, so I had to look for a pharmacy to get gauze and antiseptic. The wounds did not heal even when I moved on to Thailand, where language barrier became another problem when buying antiseptic.

Things like this would have been avoided if I had just brought with me my own first-aid kit. I was on a month-long backpacking trip; Of course, I would run into something like this one way or another! I should have known better.

Injury-related items aren’t the only things you should prepare. If you have certain allergies, bring your meds. Diarrhea is also common when you’re on the road, so bring Loperamide too. Painkillers might be of use too. A typical first-aid kit doesn’t weigh much! And it should be a packing staple!

Gone are the days when mobile phones were used only for calling and texting. In this day and age, your smartphone can be the most powerful tool you have especially when traveling. You can use it for research, navigation, or entertainment.

When it comes to safety, it’s also pretty dependable. Your phone can be used as a flashlight, something you’ll need in case of emergency. It can be a compass or a map in case you get lost. And you can simply call emergency numbers (911 in the Philippines and the US, 000 in Australia) or loved ones if you need immediate help.

But that only works if you have battery power. Most smartphones would last only a day, and there are instances when that’s not enough. The last thing you want is not being able to use it just when you need it the most. A powerbank would ensure you have enough juice to keep your phone alive in case something untoward happen.

Disasters, accidents, and even crimes can strike without warning. Sometimes, all you need to save yourself is a little attention.

The humble whistle can be life-saving. Its high-pitched bellow is more detectable than human voice. When you’re trapped under rubble after an earthquake, on the verge of drowning, or just about to be assaulted by a stranger in the middle of the night, you can call other people’s attention with a whistle. It’s something that you should always bring with you anywhere because you’ll never know.

It’s not just about comfort. I used to never pay attention to footwear. Unlike most men I know, I’m not into shoes, and I don’t care about it as much. I just wear whatever is available. Back then, I owned just two pairs: a pair of leather shoes for formal occasions and a pair of chucks for everything else. Yep, I wore chucks even when I’m climbing a mountain. Dumb!

You know why I finally bought a pair of walking shoes? Because I almost died. It was on Mt. Melibingoy in South Cotabato. It rained that morning so the path was a bit muddy and slippery. I slipped multiple times, leaving me with scratches all over my arms and legs. But at one point, I was way ahead of the pack when I slipped again and almost fell off the cliff.

This one, you don’t even need to buy from any store. It only takes a bit of your time. List down all important details about your health and print it out:

If you have an iPhone, you can set up your MEDICAL ID. Just go to your HEALTH app, click on MEDICAL ID on the bottom right corner of the screen, and accomplish the form. 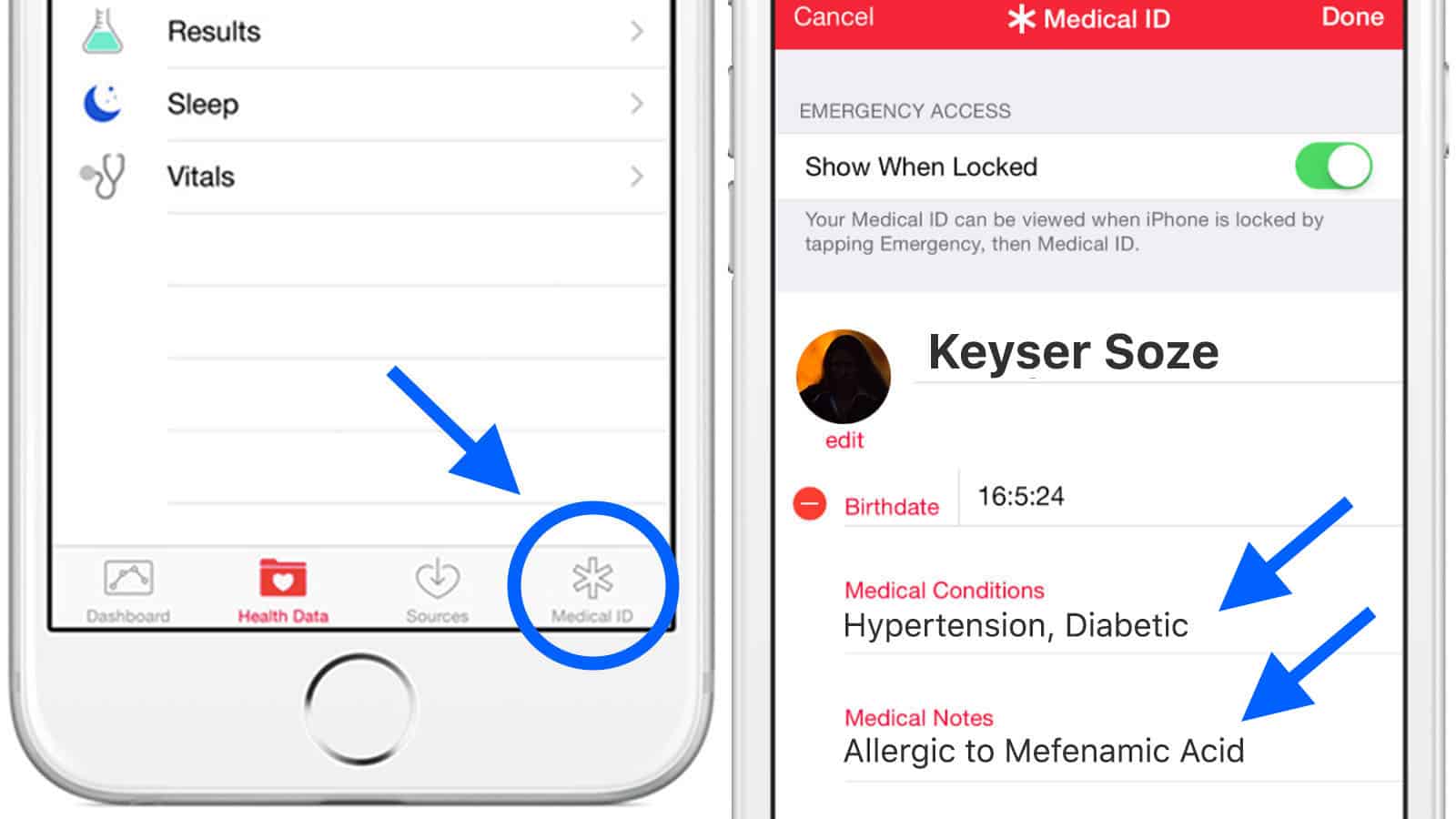 Why is this important? Because if you get involved in an accident or suddenly encounters a health problem, the first responders can easily see the details that they need to know, especially when you don’t have much time. If your Medical ID is activated on your phone, it can be easily accessed even when the phone is locked.

But please, input only details that you are absolutely sure of. Don’t enter you’re Blood Type A-positive (A-) if you’re not sure if you’re A positive or A negative. Don’t declare you’re Type O just because you’re mom is also O.

And oh, most importantly, get yourself travel insurance every time you plan on hitting the road! It’s something that you would never wish you would use, but you would be extremely thankful that you have should you need it.

some great tips there! definitely dont go with out repellent or a first aid kit.

yes, of course we should take care of our self during travel. Thanks for this post. It would help the people to know about things need to do during travel to protect themselves.

Useful tips for travelers. Thanks for the help.

Most Useful Tips for the explorers. Thanks, dear.