As the capital and most populated city of Denmark, Copenhagen is brimming with historical landmarks and cultural sites that can easily fill any visitor’s week-long itinerary. But if you plan to visit nearby attractions, other cities in Denmark and even in other neighboring countries, Copenhagen is also an excellent base. Thanks to its efficient and sophisticated transportation system.

Planning to make Copenhagen your jump-off point to other nearby attractions? Here are some of the places that you can visit on a day trip.

Located in eastern Denmark, several kilometers north of Copenhagen, Helsingør (also Elsinore) is an important and busy port city along the Øresund Strait. Forming the narrowest point of the strait with Helsingborg in Sweden, the name came from the word “hals” which means “narrow strait”.

From its formation in the 15th century, the city used to function as a “toll gate” for foreign ships passing through the strait. Today, it serves as a busy terminal for ferries plying the route between Helsingør and Helsingborg in Sweden).

One of the most prominent cultural and historical landmark is the Kronborg Castle, overlooking the Øresund Strait and which is believed to be the inspiration for Elsinore in William Shakespeare’s famous classical play, Hamlet.

Getting There: From Copenhagen Central Station, there are direct trains to Helsingør Station via Coast Line. The travel time is 45-60 minutes. The Helsingør Port/Ferry Terminal is just a short walk from the train station.

Southwest of Helsingør and about 30 kilometers north of Copenhagen is Hillerød. It was founded in the 16th century and was formerly named Frederiksborg. With Denmark’s fourth largest forest Gribskov in the north and woodland Store Dyrehave in the south, Hillerød, which means “clearing in the forest”, lives up to its name.

The most recognizable landmark is the 17th-century Frederiksborg Castle (Hillerød Slot). It also houses the Frederiksborg Museum. The castle ground harbors a lake and vast Baroque gardens.

Getting There: From Copenhagen, take the S-Train to Hillerød Station via Nordbanen line. The travel time is about an hour.

Roskilde is located west of Copenhagen. One of the oldest city in Denmark, its history can be traced back to over a thousand years ago when it was Scandinavia’s center of trade. The Vikings dominated the area for much of the medieval period, particularly from the 8th to the 11th century. It was also the capital of Denmark from the 11th century to the mid-15th century.

Fast forward to the present, Roskilde is the educational and business hub of Denmark’s Zealand Region. Tourism is a major contributor in the economy, with developed tourism facilities like hotels, restaurants, and shopping places.

Stændertorvet (main square) is the center of the old town. The UNESCO-listed Roskilde Cathedral is one of the major landmarks of the city. It is the final resting place of many Danish monarchs.

Getting There: From Copenhagen Central Station, take a train to Roskilde Station via Danish Main Line. The travel time is about 30 minutes. Trivia! Roskilde Station is the country’s oldest functioning railway station and the railway between Roskilde and Copenhagen is the first ever railway line in Denmark. The station serves intercity, regional and international trains.

Jægersborg Dyrehave, or simply Dyrehaven, is one of the three hunting grounds and forests in North Zealand included in the UNESCO World Heritage Site in 1995. Located north of Copenhagen, this encompasses about 11 square kilometers of woodland and greenery.

Dyrehaven is also known for its deer park and colossal oak trees. It is home to a large population of red and fallow deer. Within the park is the Hermitage, the royal hunting lodge.

It also hosts events such as Hubertus Hunt, Day of the Kite, Ermitage Race, and an annual theater production by the Royal Danish Theatre.

Getting There: From Copenhagen, take a train to Klampenborg Station via Coast Line or Line C if taking the S-Train. The travel time is about 20 minutes.

Located over 160 kilometers southwest of Copenhagen on the island of Funen, Odense is historically known as the sanctuary of those who worship Odin (a Nordic god), hence the name. It was one of Denmark’s oldest cities and used to be a commerce hub during the Middle Ages.

Today, Odense is one of the largest cities in the country and the administrative seat of Odense Municipality. It still retains its status as the commercial hub of Funen with industries like breweries, agriculture, and floriculture. It also boasts diverse shopping districts.

Getting There: From Copenhagen Central Station, take a train to Odense Station via Copenhagen–Fredericia/Taulov Line. The travel time is about an hour an a half.

Situated in the southern portion of the country and over a hundred kilometers south of the capital, Nykøbing Falster lies mostly on Falster Island but also includes an area on Lolland Island.

The islands are separated by Guldborgsund Strait, but the Frederick IX Bridge links the two. The history of the city dates back to the 12th century. Today, although not as busy as the other major cities in Denmark, Nykøbing Falster has a commercial district with shops and restaurants.

Facing the northern portion of Germany, it is also a popular summer getaway for the Germans, at least for those living in the north. The most iconic landmark is the 20th century water tower, Nykøbing Vandtårn.

Located on the southeastern portion of Amager Island and about 12 kilometers south of Copenhagen, Dragør used to thrive as a seafaring town in the second half of the 19th century. Its roots goes way back to the 12th century as a fishing port and later on developed as a trading port.

It boasts well-preserved structures, especially in the old area of the town. It has charming cobblestone alleys lined with traditional Danish red-roofed yellow houses.

Getting There: From Hovedbanegården (Tivoli Gardens) in Copenhagen, take a bus (Bus 250S) to Dragør. Alight at Dragør Skole Bus Stop on Vestgrønningen Street. The travel time is about 45 minutes. The old town is just a short walk from the bus stop. You will know you reach the old town when you see the cobblestone streets.

Kongens Lyngby, or simply Lingby, is a famous shopping destination in the suburbs north of Copenhagen. The busiest street is Lyngby Hovedgade, where shops line the whole stretch. The most popular shopping places are Magasin du Nord and Lyngby Stocenter. The street is not far from Lyngby Station.

Apart from shopping, Lyngby also has an Open-Air Museum featuring gardens, old buildings, particularly from the mid 17th century to the early half of the 20th century. It also showcases farms and livestock. You might even bump into costumed actors.

It is located further north if coming from Lyngby Hovedgade. The nearest train stations are Fuglevad Station and Brede Station (local train).

Getting There: From Copenhagen, take the S-Train to Lyngby Station via Nordbanen Line (Hillerød Radial Line). The travel time is about 30 minutes.

In the southeastern portion of Denmark on the beak-shaped Møn Island, Møns Klint covers about six kilometers of the island’s eastern coast. This stretch of chalk cliffs, facing the Baltic Sea, is one of the most famous natural attraction in Denmark.

The protected nature reserve area is also an attraction on its own, encompassing hills, pastures, forests, and bodies of water. There are trail paths for trekkers and cyclists around the park and going to the cliffs. There are also trails leading down to the beach from certain points along the cliff tops.

Other Attractions: Aborrebjerg Hill (one of the highest points in the country), GeoCenter Møns Klint, scenic trails, Liselund Park, Klintholm Estate, and the Mandemarke Bakker (viewpoint).

Getting There: The easiest, fastest, and cheapest option is by driving/renting a car, However, if you don’t have international driver’s license, you can get on a train from Copenhagen to Køge Station. From Køge Station, transfer train to Faxe Ladeplads Station. From there, take a taxi to Møns Klint. In summer, there are regular bus services to the jumping-off point. The travel time via public transportation is about three hours.

For theme park lovers, especially those who are fans of Lego since childhood, this is a worthy destination outside Copenhagen for both adults and kids.

Established in 1968, Legoland Billund Resort is located next to the original Lego factory in Billund. It is one of the most visited tourist attractions in the country, joining Tivoli Gardens and Dyrehavsbakken in the list.

As of writing the park has nine themed areas featuring rides and shows. The Miniland Area particularly showcases famous landmarks in Denmark and other few structures from around the globe.

Getting There: From Copenhagen Central Station, there are no direct train routes, so you need to alight at Vejle Station. From there, walk to Vejle Trafikcenter and get on a bus (Bus 43) bound for Billund. This bus will stop at Legoland Bus Stop. The travel time is about three hours.

Situated on the other side of Öresund Strait, Malmö is connected to Copenhagen by the Öresund Bridge. It is the thrid largest city in Sweden and one of the earliest industrialized towns in Scandinavia. The development halted after the post-industrialism. 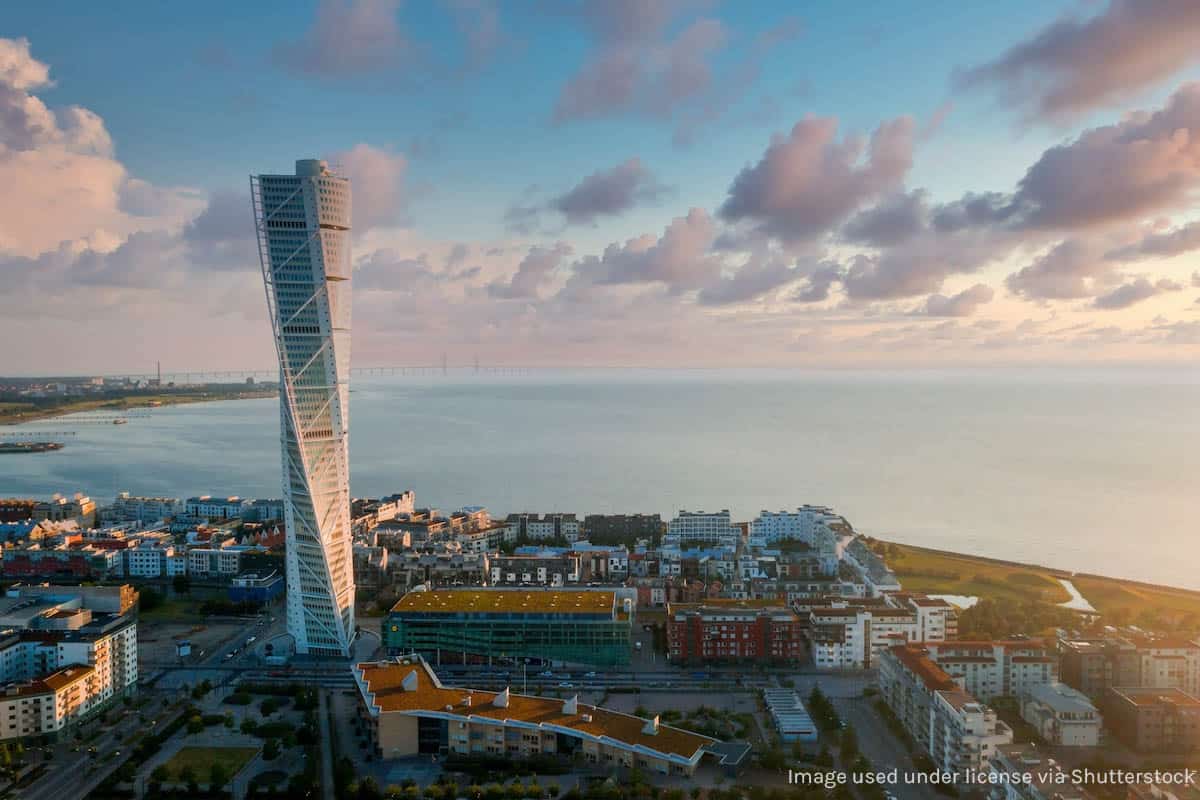 However, since the launching of the Öresund Bridge, the city quickly kept up with other major cities in Sweden and with the neighboring city Copenhagen in Denmark in terms of urbanization, attracting investors, university students, and people seeking work. One of the big companies that make Malmö its headquarters is IKEA.

Despite the surge in infrastructure development, the city still preserved many historic buildings and parks. One of the significant historical landmarks is the St. Peter’s Church, the oldest building in the city.

Getting There: From Copenhagen Central Station, take a train to Malmö Station via Öresund Line, passing through Öresund Bridge. The travel time is about 40 mimutes.

Located a few kilometers northeast of Malmö, Lund is another interesting stop in Sweden as a day trip from Copenhagen. Established around the 10th century, the city is considered one of the oldest Swedish cities. From being under the rule of Denmark, the city officially became part of Sweden in 1720 through the 1658 Treaty of Roskilde.

The historic core has the 11th-century Lund Cathedral as its centerpiece. Another cultural landmark is the 17th-century Lund University, the oldest and largest in Scandinavia. The city center still reflects the medieval period influence through the well-preserved street layout and buildings.

Getting There: From Copenhagen Central Station, take a train to Lund Central Station (Lund C) via Öresund Line, passing through Öresund Bridge. The travel time is about an hour.

Here are some of the top hotels and hostels in Copenhagen, as scored by Agoda customers.