The Other Poor Travelers is a series on this blog where we feature other backpackers who inspire us not just with their ability to travel on a budget but also the tales and lessons they pick up along the way and share with the world. It’s an honor to have Jamie Bowlby-Whiting of A Great Big Scary World as our first featured traveler. Here’s his encouraging story.

As a child I was scared of dinosaurs. I was also scared of germs. And the dark. And cannibals, spiders, dirt, being alone, being in crowds… pretty much anything and everything. But it isn’t fun being scared. It feels like you are falling, never going to hit the ground. It’s the feeling you get when you trip, but it goes on and on and on and on so that you start to feel constantly unwell. Nobody, NOBODY, wants to feel like that.

As I got older, I started to realise how these fears were affecting me adversely and inhibiting my very enjoyment of life itself. I tried to stop my fears, but you can’t just stop being scared: our minds don’t work like that. Instead, I concentrated on accepting my fears and learning to deal with them. ‘There probably isn’t a dinosaur outside my bedroom door, so I’ll open it slowly and double check, then leave my room.’ ‘Touching the grass without gloves probably won’t make me sick, so I will wash my hands later..’ And so on.

I recently came up with an analogy for fear. I call it the little pink ghost analogy. It goes like this:

“Fear is a little pink ghost that has the ability to change into any form more terrifying than your worst nightmares could even dream up. He can cripple you, taking everything. When he is around, you are falling constantly, a bottomless journey of no end. You have three choices of how you can deal with this little pink ghost. Firstly, you can run and you can hide. He will always be chasing you, he will always be looking for you. One day he will find you. Secondly, you can punch him in the face. Fear roars at you, you roar right back. It is a simple matter of who roars loudest. And lastly, you can embrace him and you can hold his hand. You walk with fear and you accept him for the little pink ghost that he is, always knowing that he is there, but keeping him in your sight.” [Excerpt from The Boy Who Was Afraid of the World]

I choose now to keep fear in my sight – to hold his hand. Yet as I get older, fears change and new ones appear. ‘What will I do with my life?’ ‘What happens if I run out of money?’ In 2012, I was working as a teacher and not enjoying my job or the place where I was living. Against everything that my mind and body implored me to do, I decided to quit my job, leave my apartment, and start hitchhiking around Europe. By my calculation, I figured out that I had enough money to travel for at least a month, maybe two if I was careful.

When I started, I nearly quit within five minutes because I was so nervous. Fortunately a car stopped very quickly and gave me a ride. On the first night, I was left on the outskirts of Brussels at four into the morning and had to rock myself to sleep in the garden of an abandoned building. By morning, I was exhausted, but unharmed. This made me realize that I didn’t need to be afraid of sleeping outside anymore – how likely is it that someone terrible would find me and do bad things? Not very.

Over the following months, my journey continued. EVERYONE offered me nothing but kindness. Strangers took me into their homes, people who picked me up on the side of the road offered me good conversation and refreshments: suddenly the world had become a wonderful place full of opportunity. After three months I hadn’t paid once for accommodation, I had learnt about foraging and skipping (reclaiming sealed food from supermarket bins), and made friends that will last a lifetime. Before I knew it, I had been on the road for several months without finishing my funds. There were days when I travelled far, ate well, and slept comfortably without spending a single penny (on a later trip across Europe – mainly Italy – I spent an average of €2.36 per day for 9 days while gorging myself on delicious food and visiting both beaches and mountains). I now feel that my eyes have been opened.

Several months into this journey, I met someone who was like I had once been – they were dependent upon money and stability and did not trust in strangers. Somehow talking to me persuaded them to give up their job, their home, their whole life, and hitchhike as I was. Despite their initial fears and similar lack of funds, they claim (to this day and beyond) that deciding to give it all up was (and is) the best decision they have ever made.

It took a long time coming, but all of these experiences have taught me one thing: You need neither money nor bravery to travel the world. All you need is a little bit of desire and then to put one foot in front of the other. Everything else will fall into place. The mantra I live by today is this (regardless of how scared you are or how much money you have): Everything will be OK. Everything is always OK. Until it’s not.

Get out there, have your adventure, and learn to love life. You won’t regret it. 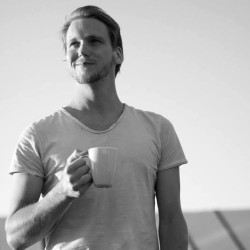 Jamie Jamie Bowlby-Whiting
Author at A Great Big Scary World
Jamie is the author of Great Big Scary World where he shares his thoughts on life and overcoming fear, mingled in with stories and videos of his adventures (including cycling 1,000 miles on a £30 bicycle and rafting the Danube on recycled materials). He recently published The Boy Who Was Afraid of the World, a true story depicting the internal roller-coaster that occurs when deciding to give up everything and trust in strangers while cursed with a significant lack of courage or money. You can follow his adventures through his blog, Facebook, or Twitter.