As a tourism powerhouse, Italy is usually on the list of priority countries for international travelers to Europe. Rome, Venice, Milan, Florence, and Naples are some of the cities that tourists look forward to. And then, there’s Bologna.

Bologna might be well-known among the locals, but it is often overlooked by foreigners. The capital of the Emilia-Romagna region, it is a famous food destination with many gastronomic wonders waiting to be discovered. It has a history that dates back to the time of the Etruscans and ancient Romans. The historic center is home to many centuries-old towers and churches, vestiges of a storied past. The city is also home to the University of Bologna which is the oldest university in Europe.

Bologna is an interesting place to explore because of its rich culture, delicious food, and long history. If you’re interested to visit Bologna, here are some activities and tourist spots to consider for your itinerary.

The old town of Bologna is full of charm. Once you walk into it, you’ll be transported to another epoch. Its 12 gates in various states of repair are like portals into a different time. You may enter through any of these gates to get to the old town proper. Like in many places in Italy, you’ll find centuries-old churches mingling with beautiful terra cotta buildings.

If budget is an issue, you can join a FREE walking tour. The tour we joined was run by this company and will take you to the key spots around the Old Town including the following: 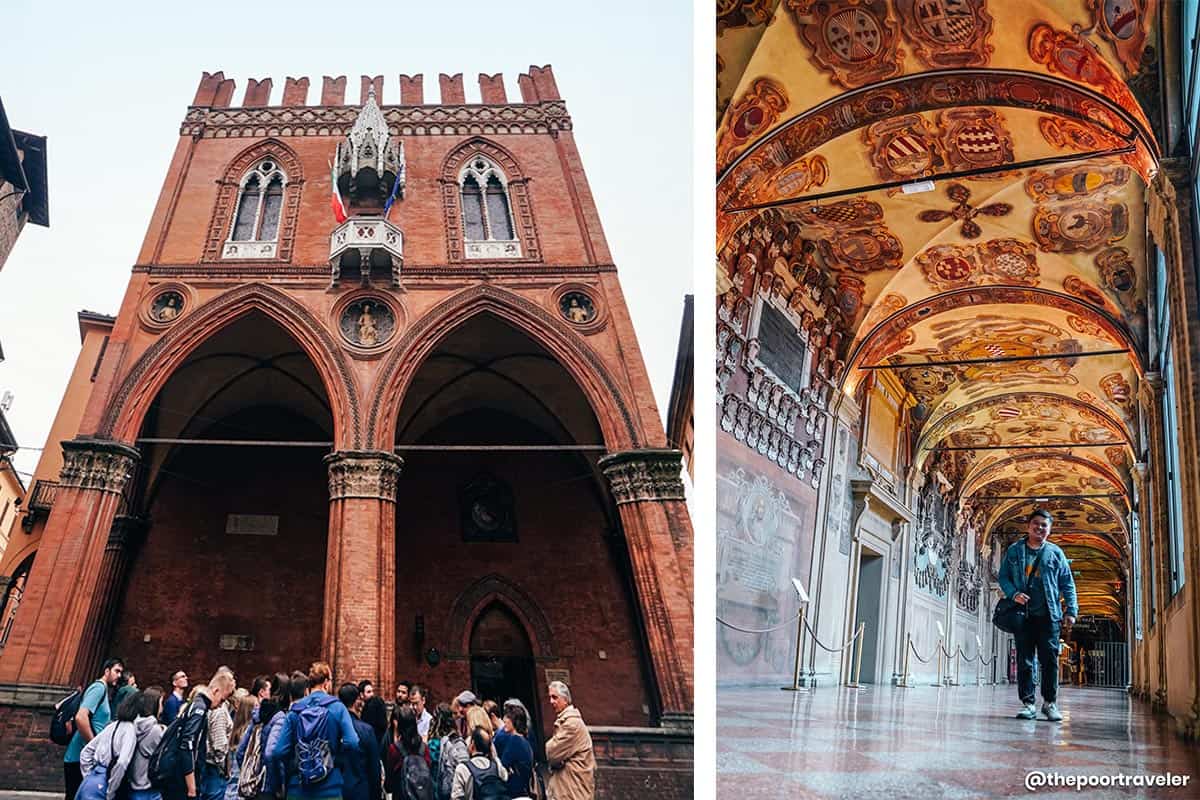 A tour guided will be with you the entire time, explaining the stops and giving insights along the way. But in case you’re not aware: FREE walking tours aren’t exactly free. It is free, in theory, but you are expected to give a tip at the end, which is the only way the guides can make some money.

Schedule: Saturday/Sunday 11am
Meeting point: Piazza di Porta Ravegnana (at the base of Asinelli, one of the two towers)
Duration: 2 hours

The Piazza Maggiore is a central square in the old town; it’s full of history and beauty. The square dates back to the 1200s, but the name ‘Piazza Maggiore’ only became official in 1945. 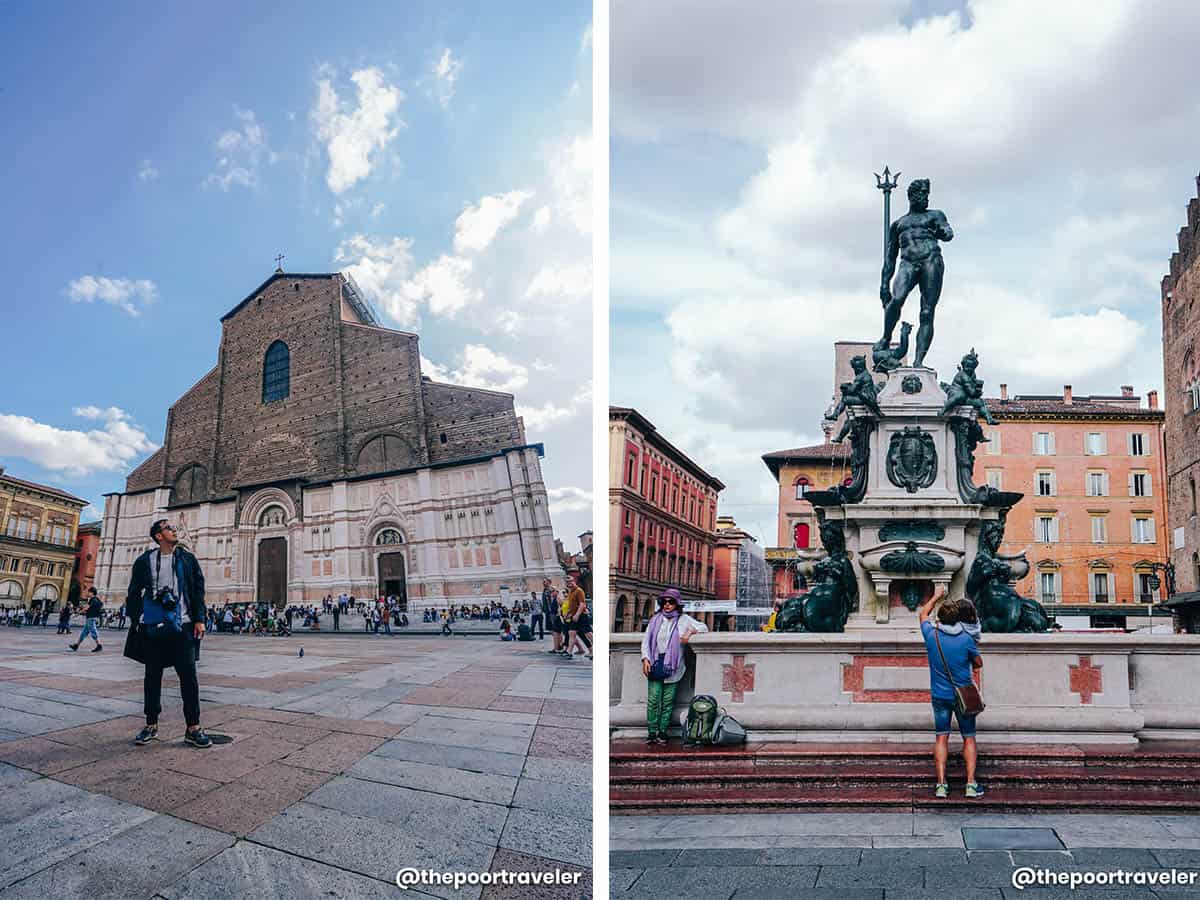 Some places of interest in the square include the Palazzo dei Banchi, Basilica of San Petronio, and Palazzo d’Accursio just to name some. In the adjacent square stands the Fountain of Neptune (Fontana di Nettuno), a civic Mannerist monument built in the 16th century. 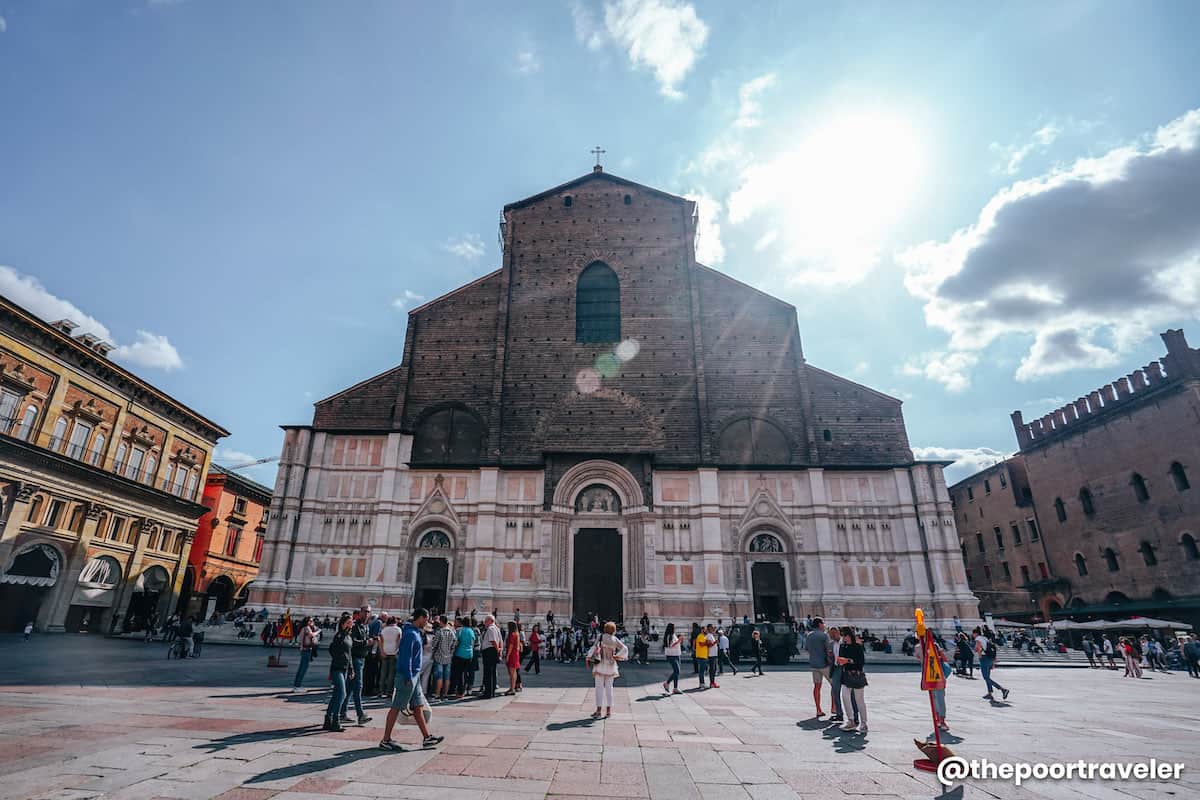 The construction of Basilica di San Petronio began in the 14th century and finished in the 15th century, except for the facade which is yet to be completed up to this day. Named and dedicated after Bologna’s patron saint and located at Piazza Maggiore, this Gothic-style church is considered an important landmark of the city. The Basilica also features an ancient sundial and a museum. It also houses some relics and 22 chapels.

Located at the back of the huge Basilica of San Petronio, facing Piazza Galvani, Terrazza di San Petronio is another draw of the church. This serves as a view deck for those who want to get another perspective of the city and the surrounding structures. There’s a lift that will take you up the deck for €3. 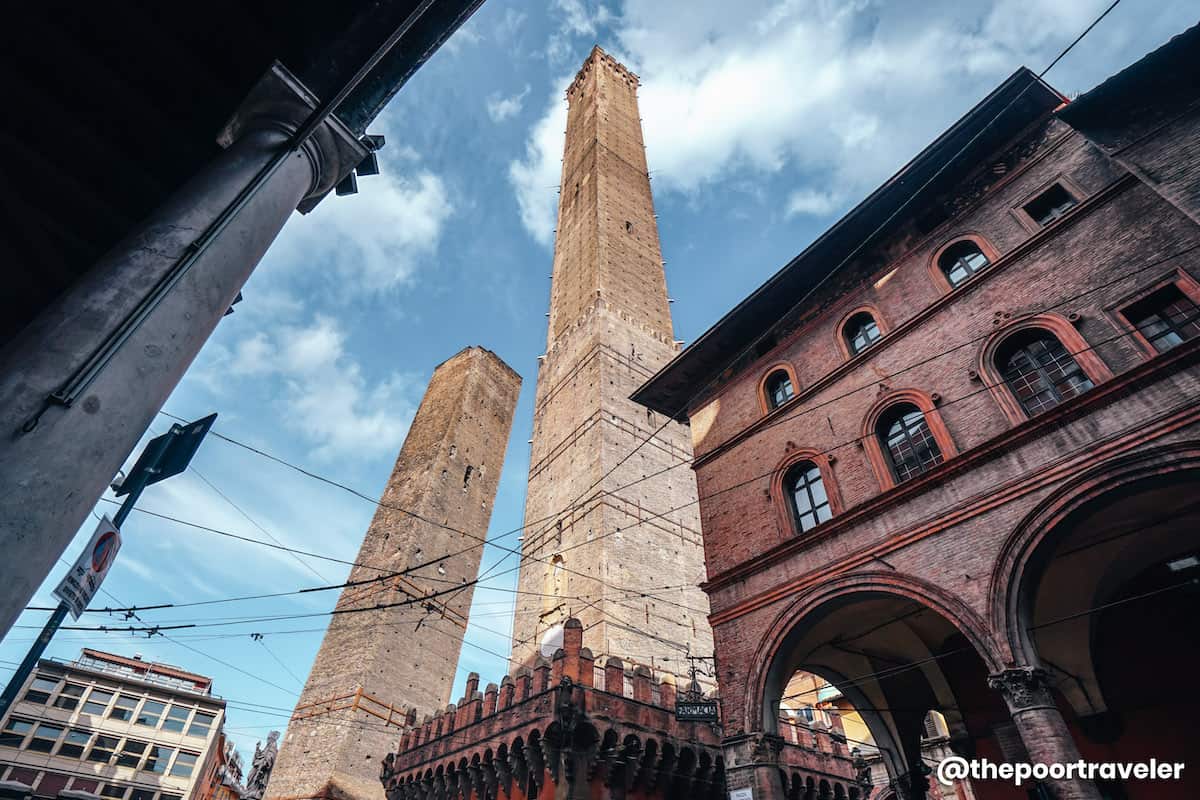 These two-centuries-old towers are iconic landmarks of Bologna. There were many towers built during the medieval ages, but many collapsed or were demolished. Le Due Torri are just some that are still standing. The construction of these structures sometimes takes up to a decade to finish. The use of these varies from prisons to houses to shops. The two famous towers are Torre degli Asinelli and the shorter Garisenda Tower. These structures date back to the 1100s and are a symbol of the city. You can further explore Asinelli Tower by climbing to the top.

One of the elements that give Bologna its defining characteristics is the presence of porticoes. And it’s not surprising that the longest network in the world is found here. Portico di San Luca connects the city center to Bologna’s religious and cultural landmark, Sanctuary of the Madonna di San Luca. Via Saragozza meets Via Portico di San Luca at Arco Del Meloncello, the usual jump-off point for those who want to experience it on foot. Portico di San Luca stretches almost 4km and features over 600 porticoes.

Perched atop the 300m Colle della Guardia hill, this 18th-century Santuario di Madonna di San Luca is a famous pilgrimage site and tourist destination in Bologna. It is located just southwest of the old town with Porta Saragozza as the nearest gateway. Dedicated to the Virgin Mary, an annual religious procession happens, starting at Basilica di San Petronio all the way up to the Santuario di Madonna di San Luca, covering the Portico di San Luca. The dome’s observation deck is also a great spot to get a panoramic view of the city. San Luca Express tourist train shuttles tourists from Piazza Maggiore to the basilica. The fare for a roundtrip ticket is €10.

Founded in 1088, the Alma Mater Studiorum – Università di Bologna is the oldest university in Europe. Today, its headquarter is the Palazzo Poggi. But for over two centuries since 1563, the main university building was the Palazzo dell’Archiginnasio. 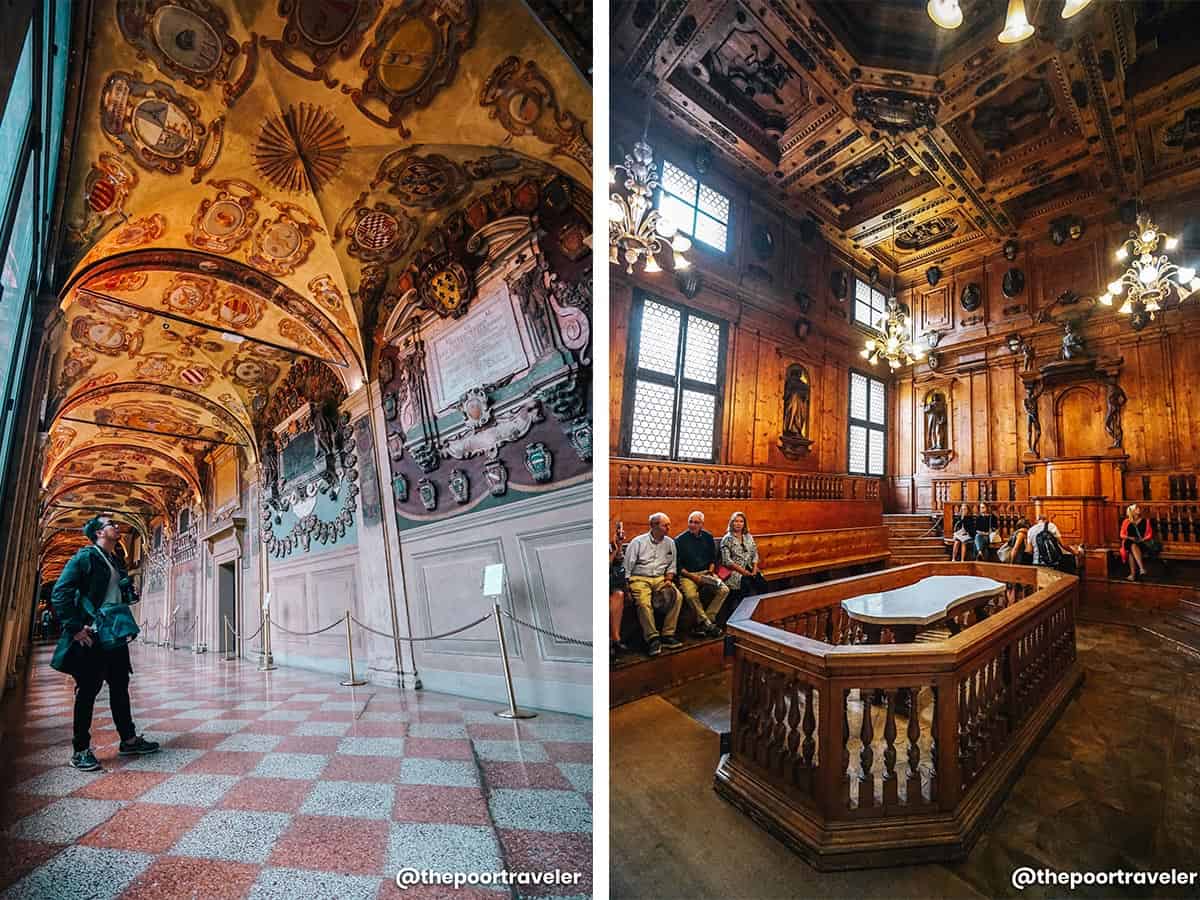 One of the Archiginnasio’s rooms is Teatro Anatomico (Anatomical Theater and Library), where public body dissections took place for university lessons. At times, the dissections were also done while Inquisition priests watched. You’ll find tiered wooden seats and a table with a marble top, surrounded by ornate walls and ceilings. It is also within walking distance from Piazza Maggiore. 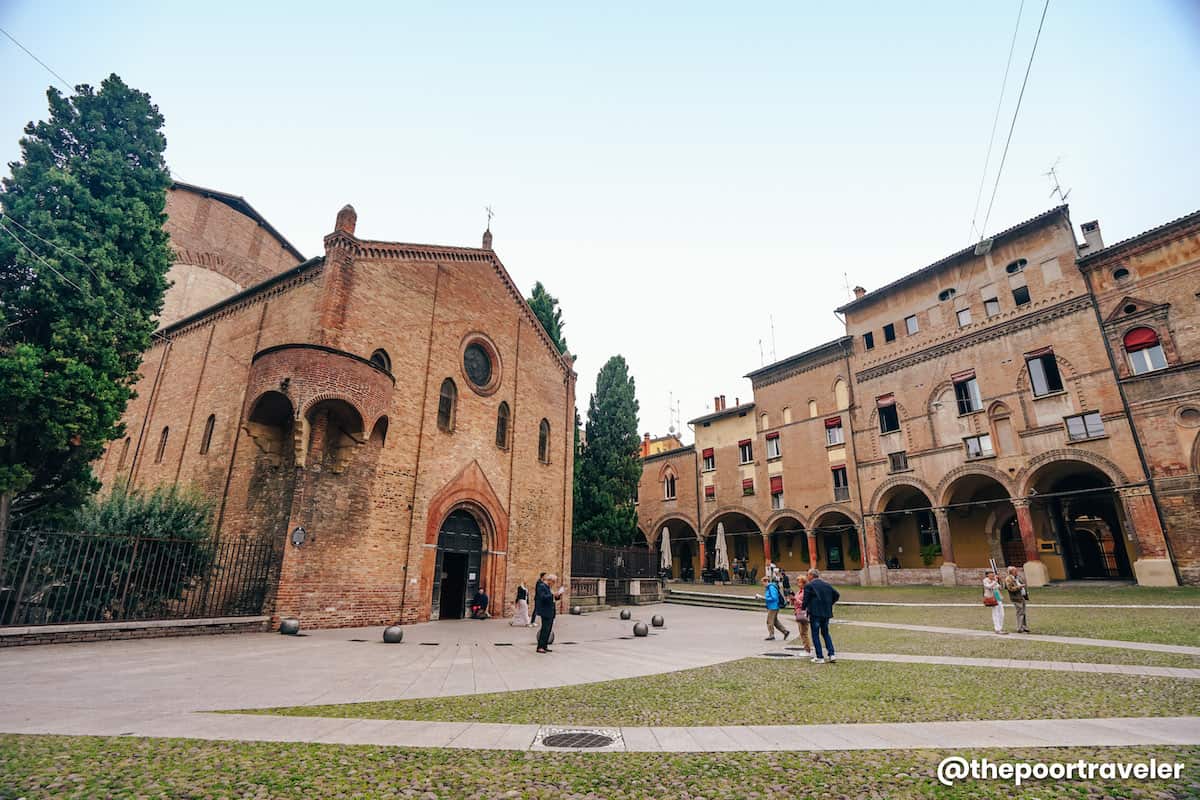 Ragú Bolognese is a signature dish of Bologna that is usually paired with flat, wide pasta, particularly tagliatelle.

The traditional Ragú Bolognese is slowly cooked using a variety of ingredients like meat (pork and/or beef), onion, celery, carrots, tomatoes, milk, and white wine. The sauce is rarely paired with spaghetti, which is common outside Bologna.

Is this some kind of a tongue twister? Well, it’s not. Haha. 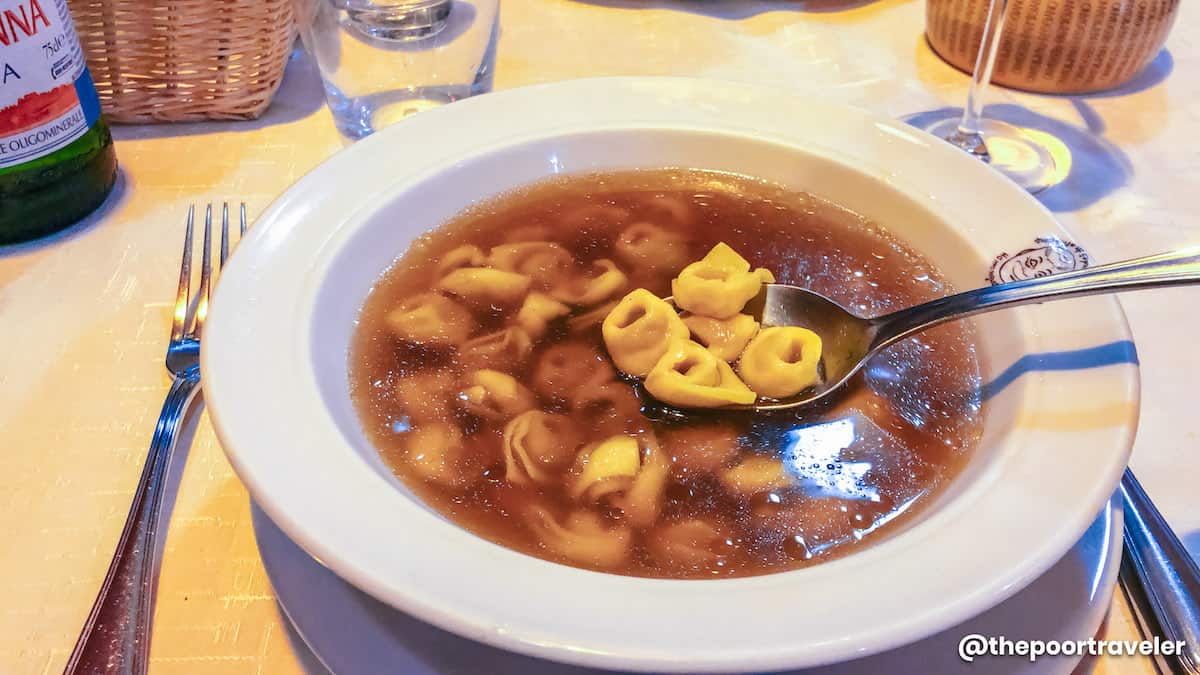 Tortellini is a round-shaped pasta, also called belly-button pasta, and resembles a dumpling. It is usually stuffed with meat and cheese. Tortellini en brodo is a pasta dish that you should try while in Bologna. It’s basically tortellini in a broth or soup.

Tortelloni bears the same shape but bigger in size and is often stuffed with leafy vegetables and cheese. Tortelacci is also a stuffed pasta that is much bigger than tortelloni.

Mortadella is like a sausage on steroids. This kind of sausage is HUGE. It’s made of finely ground pork with incorporated fats that make it appear marbled. This savory heat-cured sausage is usually seasoned with myrtle berries. 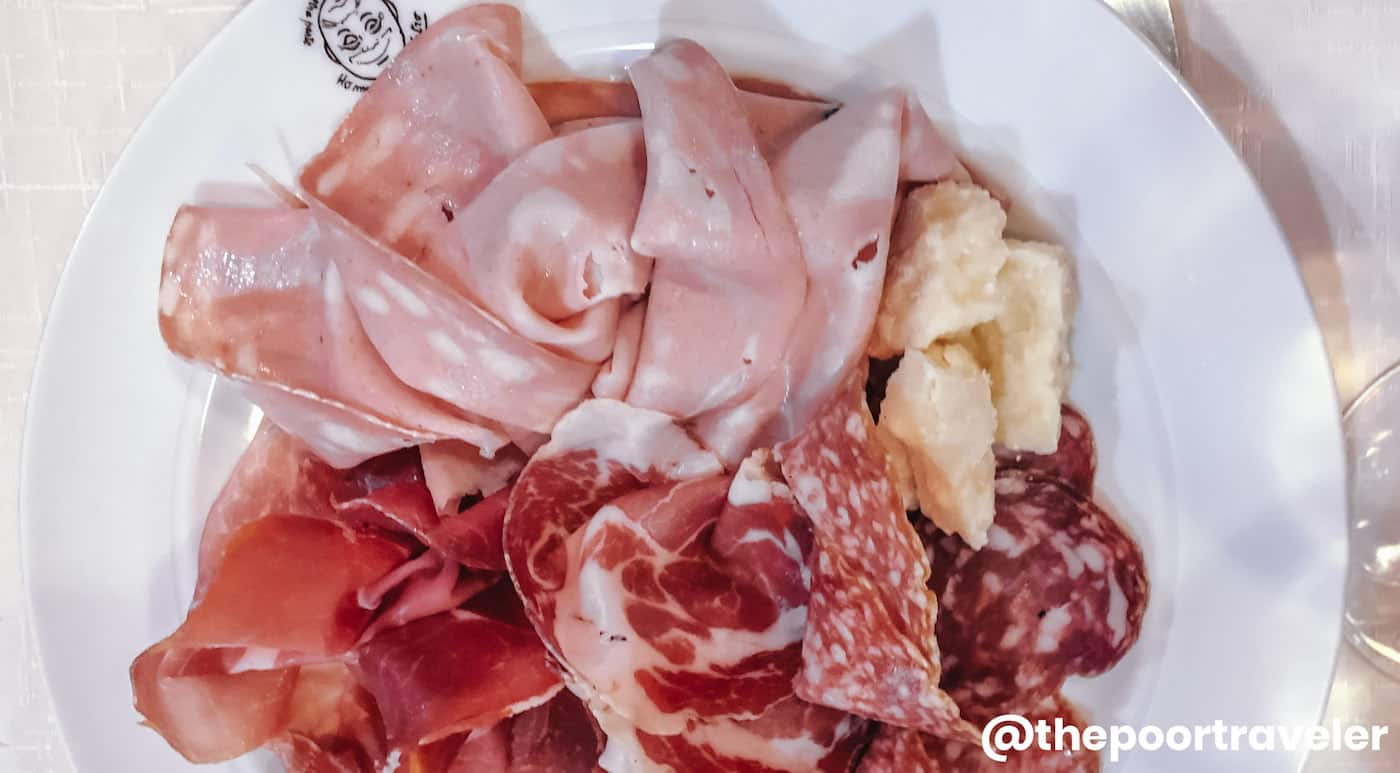 There are many versions of mortadella but the widely popular is the Mortadella Bologna.

13. Old market in the Quadrilatero 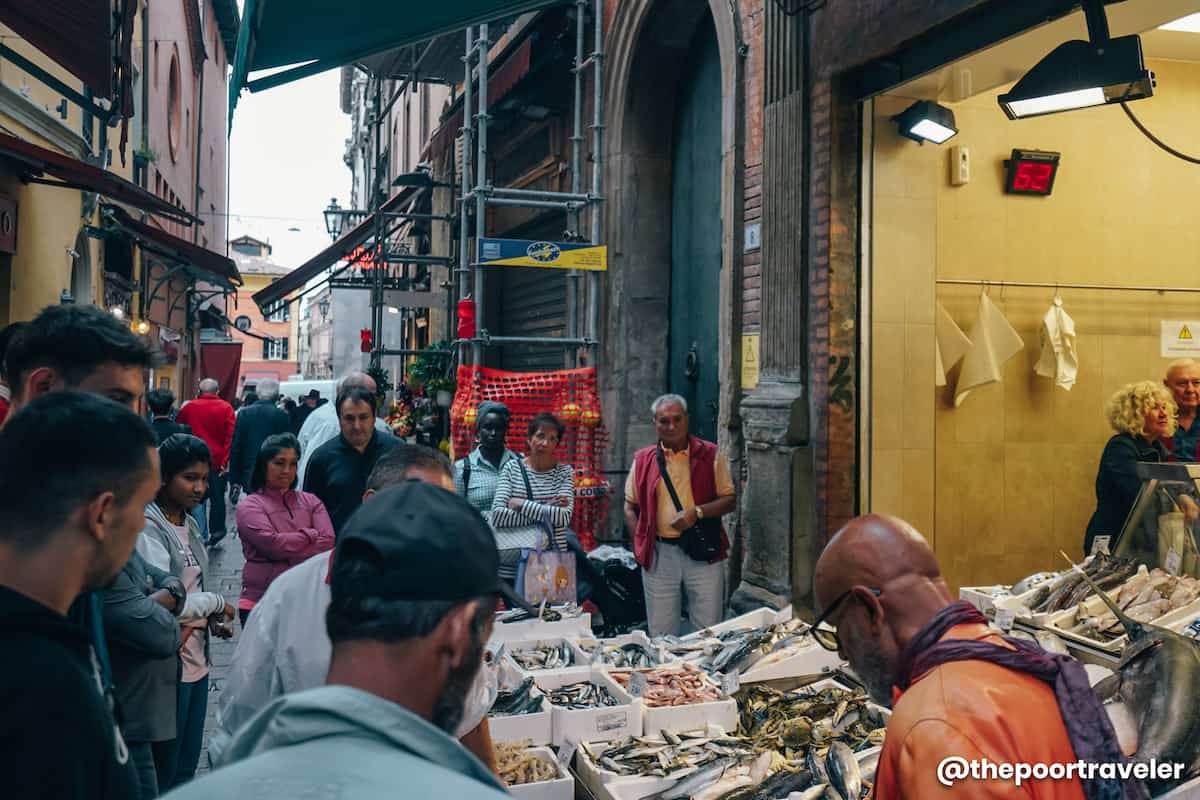 Qudrilatero is strategically located at the heart of Old Town Bologna. It dates back to Medieval times, making it the oldest food market of Bologna. The narrow streets of the old market, lined with shops and restaurants, are reminiscent of the old times. Some of the landmarks near Quadrilatero are Piazza Maggiore, Two Towers, Basilica di San Petronio, and Teatro Anatomico to name a few. It is bordered by Via dell’Archiginnasio, Via Farini, Via Castiglione, and Via Rizzoli.

Also called Torre Coronata, this 60m-high 12th-century tower used to be a defense tower. It is situated in the old town and is one of the well-preserved historical structures in Bologna. It also became a seminary and, later on, a prison for those who committed crimes against the church and the religion.

At present, all 12 floors are accessible and a parapet serves as a viewing deck for those who want to get a panoramic view of the city and the nearby landscapes. It also functions as an events venue.

15. The National Art Gallery of Bologna

If you like or know something about paintings, a stop at Pinacoteca Nazionale is a possible addition to your itinerary. It has a collection of various Emilian paintings over the centuries (13th to 18th). It’s located in the University district, northeast of the city center.

Located near Piazza Maggiore along Via dell’Archiginnasio and just across Basilica di San Petronio, Museo Civico Archeologico cradles important archaeological artifacts unearthed in and around Bologna that tell the local origin from prehistoric to Etruscan to the Roman period.

It also houses significant Egyptian relic collection. The museum, inside the 15th-century Palazzo Galvani, was opened to the public in September 1881.

Located on the northwest portion of Quadrilatero behind Palazzo dei Banchi, Sanctuary of Santa Maria della Vita is another noteworthy stop in old town Bologna. The church’s history can be traced back to the 17th century.

The facade was added in the early 20th century. Some of the outstanding features are the Museum of Health and Assistance (Museo della Sanità e dell’Assistenza), the Lamentation over the Dead Christ (Compianto sul Cristo Morto), and the 17th-century Oratory of Battuti (Oratorio dei Battuti).

Originally part of Galleria d’Arte Moderna until the 1990s, Museum of Modern Art of Bologna became a separate institution to accommodate the growing number of collections and exhibits.

Relaunched as MAMbo in 2007, the museum displays and exhibits contemporary artworks and installations, focusing primarily on experimental art. One of the celebrated section is the Museo Morandi. It’s located along Via Don Giovanni Minzoni, near the Piazza dei Martiri.

19. Museum for the Memory of Ustica

Opened in 2007, the Museo per la Memoria di Ustica was founded in memory of the 81 passengers of an aircraft that was struck down up in the air in June 1980. Up to this day, the investigation leads to a dead-end.

The vast hangar serves as the exhibit area for the permanent installation of what remains of the aircraft. Apart from the wreckage, the exhibit is equipped with 81 lights, speakers, and mirrors representing each of the victims. The museum is located outside the old town of Bologna and north of Bologna Centrale. The entrance is through a garden along Via di Saliceto.

Commissioned by Napoleon I in the early 1800s, the original design of Montagnola Park is drawn by Giovanni Battista Martinetti. The park is built on the grounds where a 14th-century castle used to be.

Additional features are the circular basin and the historical flight of stairs, the Scalinata del Pincio, built in the late 1890s. It is a short walk from Bologna Centrale.

This is a sample 3D2N Bologna itinerary with budget breakdown. Make the necessary changes to suit your preferences and plans.