When the community quarantine was implemented, I was obese and at my heaviest — 207 lb. Today, I have reached the healthy weight for my height — 157 lb.

I’m not alone in this. Vins, my blogging partner, has lost 40+ pounds over the same period. We live in the same apartment, so we follow almost the same diet and eat the same meals.

When we posted recent photos on Facebook, a lot of our friends were shocked by the transformation. I can’t blame them because even I am still surprised that we were able to pull it off. But since we get several messages asking us for weight-loss tips, I decided to write this post (even though it’s not travel-related).

Here are some before-and-after pics of Vins and me. 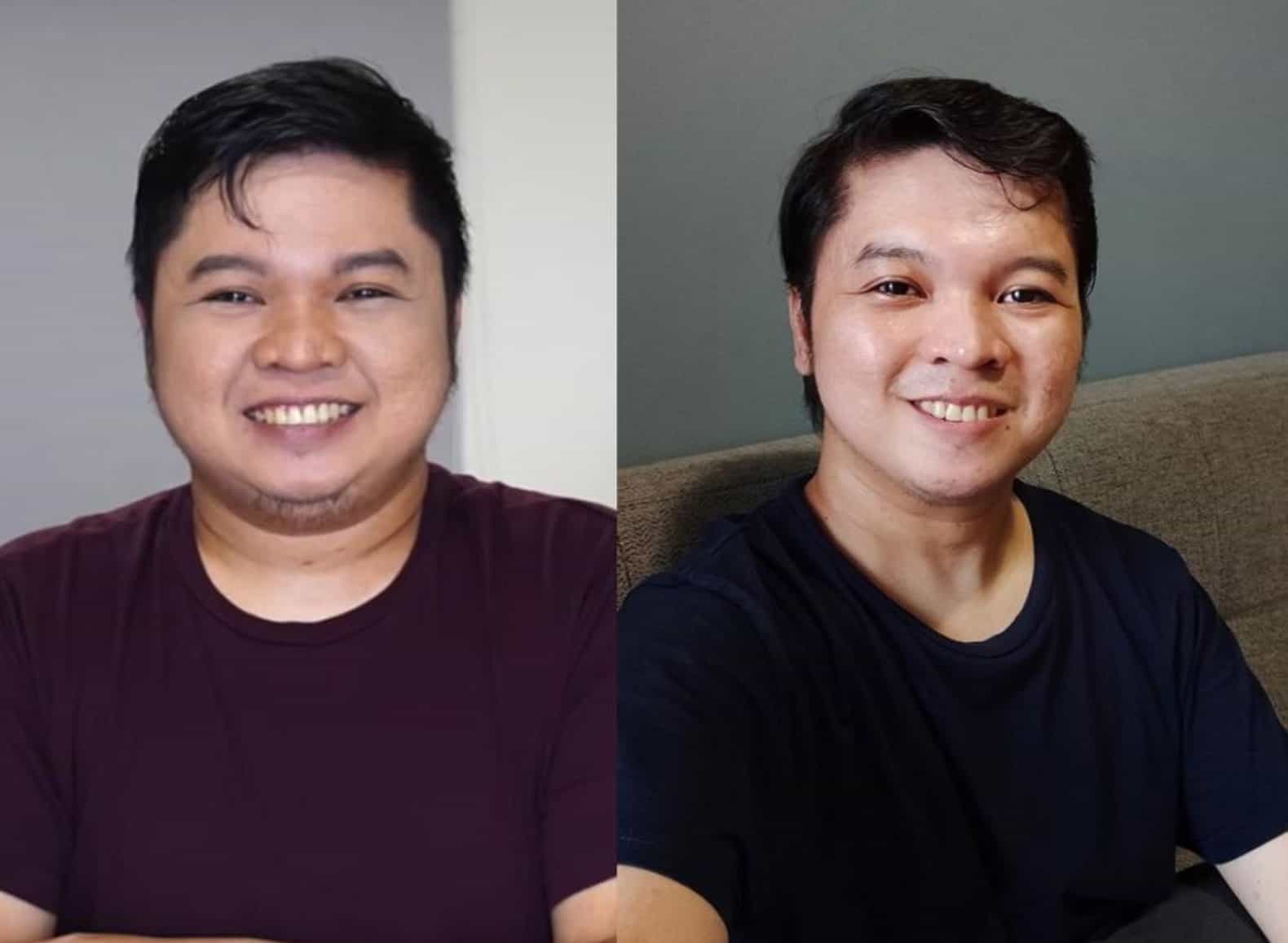 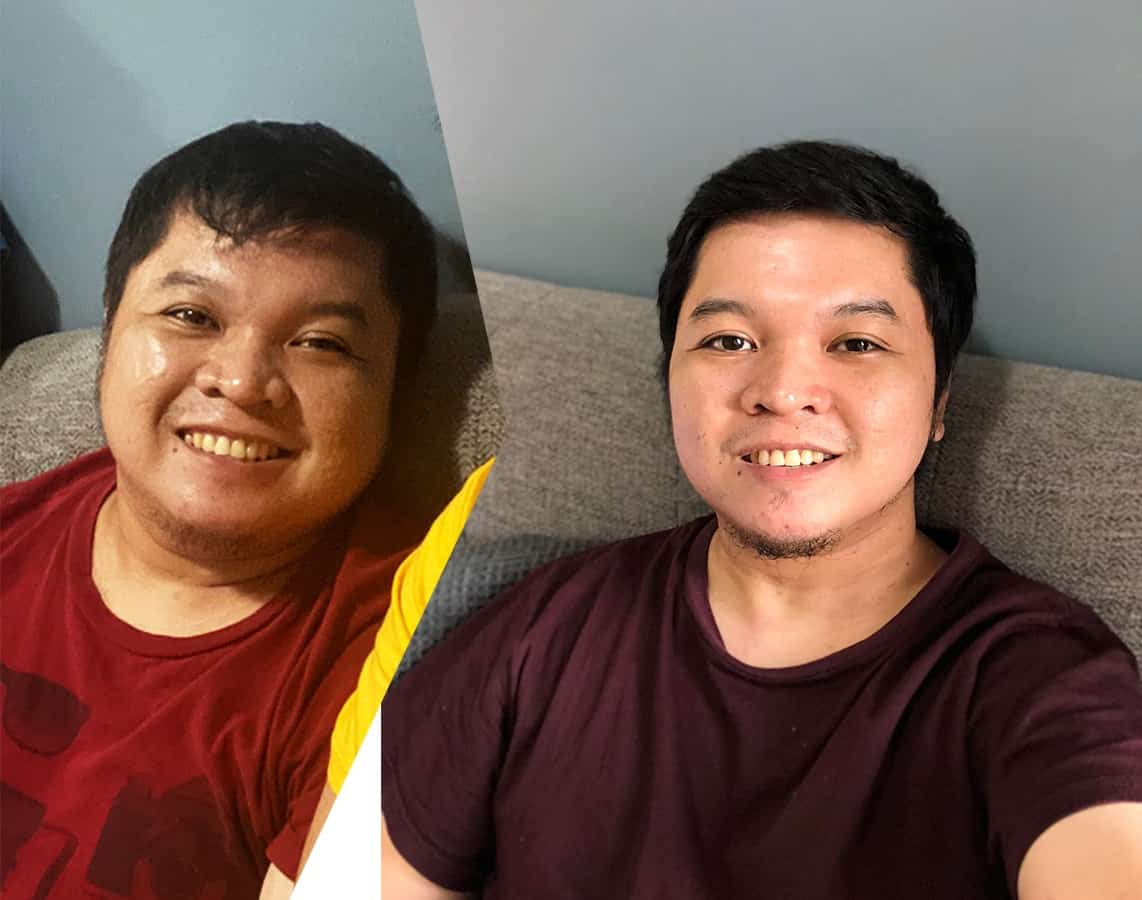 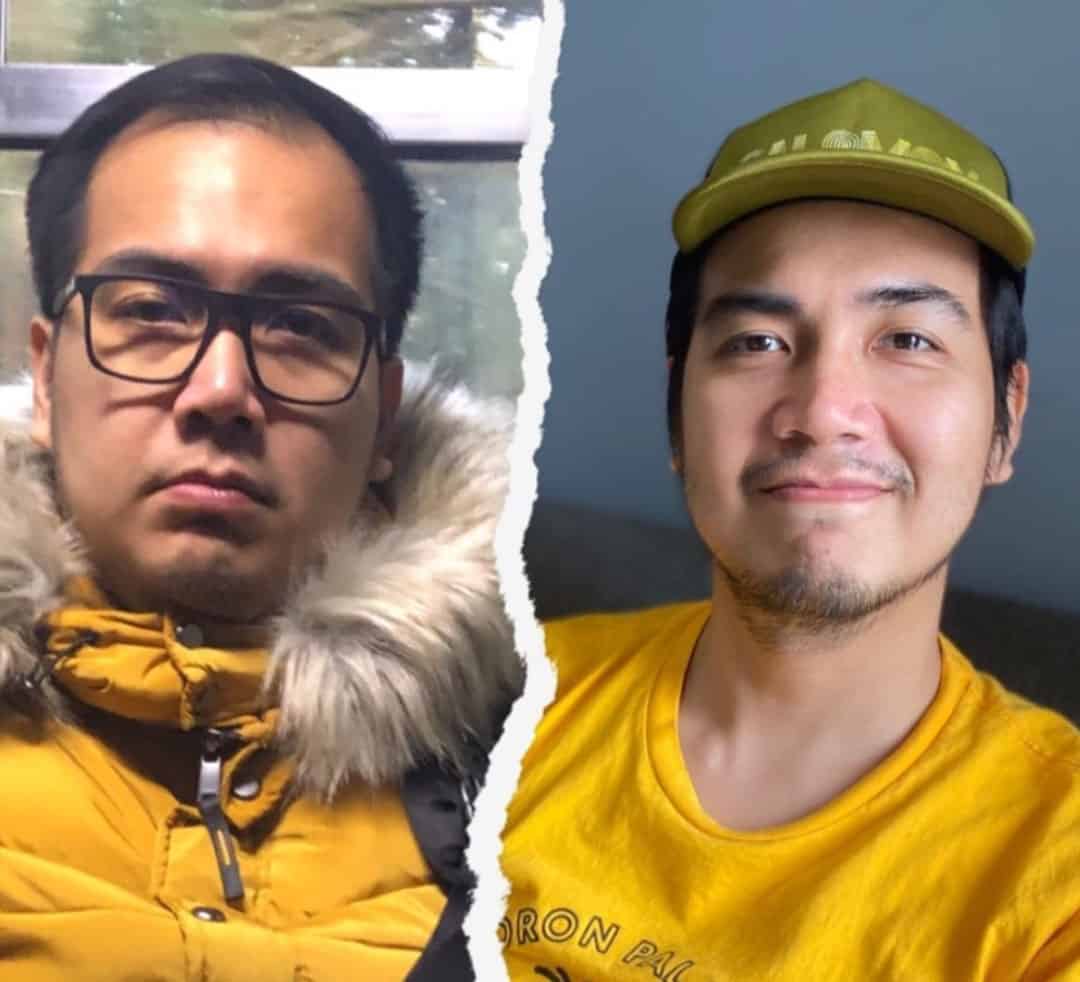 But first, a little background on how I gained weight in the first place.

I was skinny for most of my life. Some friends back in college even commented that I looked frail and sickly. Haha. But everything changed when the Fire Nation attacked. And by Fire Nation, I mean the constant stress at work. When I joined the war zone that is the corporate world, the one sure thing that made me feel happy was — yep, you guessed it — food. It didn’t help that our building had its own food court with a smorgasbord of delectable choices. Over the years, I slowly but surely gained more pounds. When I quit smoking five years ago, I just… ballooned. (I don’t regret quitting smoking, of course. It’s one of the best decisions I made in my life. But it did make me eat more.)

I thought I could turn things around when I quit my full time job to travel. But I soon learned that it was so damn difficult to resist delicious food when traveling. But that’s not when our weight would jump even higher. After all, whatever extra calories we devour is canceled out by frequent walking and trekking. The problem is after the trip — when we get home hungry for some rice and lutong bahay. That’s the real culprit right there.

Fast forward to 2020. I wanted to lose weight but the start of any year was the toughest time to do that for us. After the festive Christmas-New Year season, Vins enjoyed his birthday in January, we had a 2-week cuisine-centered trip to Taiwan in February, and I celebrated my birthday in March. I just woke up one day, stepped on the scale, and was alarmed by the number — 207 lb, the heaviest I have been ever.

So I tried to do something about it. I enrolled at a nearby gym. This is it, I thought! But after only my assessment session, that crazy little thing called COVID-19 ruined everybody’s life plans and brought the world to a standstill. All gyms stopped operations, so I never got to use my membership.

But I decided to not let it stop me. If I was gonna be stuck at home, I’d rather use the time well. I promised myself that I would still achieve the fitness goals that I had long set aside.

Please note that I am not a fitness or nutrition expert. I’m simply sharing my own experience. What works for me might not work for you. And what’s been working for me is the combination of the following.

If I could condense this whole post into just one tip, this is it — portion control. I strongly believe that this has been responsible for much of the weight loss.

In fact, when I shed off the first 20 pounds, portion control was the only thing I did. I wasn’t exercising or doing intermittent fasting consciously. I was simply limiting the size of my meals until I got used to it.

At its core, weight loss is all about consuming less calories than what your body burns. I read that to lose weight, men need cut intake to less than 1500 calories per day. I used that as a rule. We have a small kitchen scale that I use to weigh the food I put in my body. Then I google how many calories it translates to.

There are a number of reasons why this works for me.

But I drink a lot of water.

It was a struggle in the beginning. Any diet is tough at the start. But after a couple of weeks, I completely forgot that I was downsizing. I just weighed one day and was surprised — this time, pleasantly.

Is it effective? Here’s the thing: I’m not sure.

Yes, I do intermittent fasting but not consciously. Even before I had any intention of dieting, I was already doing this because I always skip breakfast. I’m just not a fan of breakfast because I didn’t like feeling bloated or heavy in the morning.

So NO, I’m not that sure whether or not it helped. But YES, I’ve been doing it this whole time.

I sometimes sneak in a fruit in the afternoon. But outside this 6-hour window, I don’t eat anything other than water and hot unsweetened tea.

When I noticed that my weight was going down, it inspired me to work out in parallel with the diet. Remember when I said that I was able to attend one assessment session before they closed all gyms? During that session, the trainer taught me some basic body weight exercises. These are just simple exercises that you can do without equipment. So I did those over and over again. When I got bored with them, I searched YouTube for other routines, which I followed.

Sometimes, I would use the elliptical machine that Vins bought last year (which was cheaper than a treadmill). I had never touched that before, but I use it now. Hahaha. 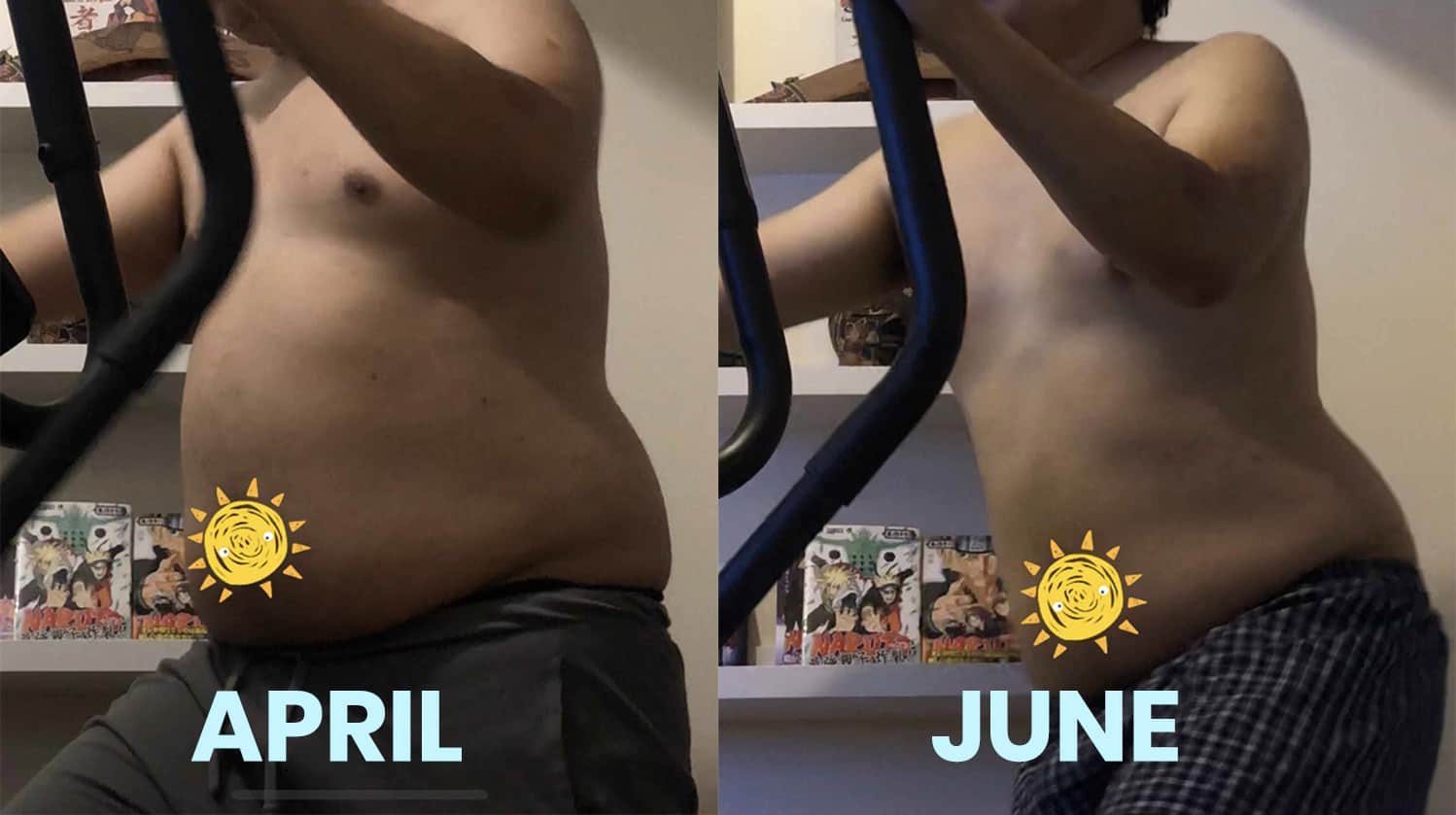 Then, when I would get bored with a workout, I’d move on to a new one. Just recently, I ordered a hula hoop online. Hahaha. It’s fun.

Often, I would just dance alone in my room. I probably look crazy doing it but no one’s looking.

I was alone during the first month of my weight loss journey. Vins was probably watching his weight too but we weren’t really comparing notes. When I lost the first 20 pounds, I posted it on Facebook. It turned out that two other friends were also trying to lose weight on their own.

Since we have the same goal, all three of us decided to support each other by creating a group chat, in which we post our progress every day. We also report what we eat. Whenever we’re craving something or about to overeat, we message the group so someone could talk us out of it. It’s like a mini-support group.

The goal isn’t to be competitive but to inspire and learn from each other. 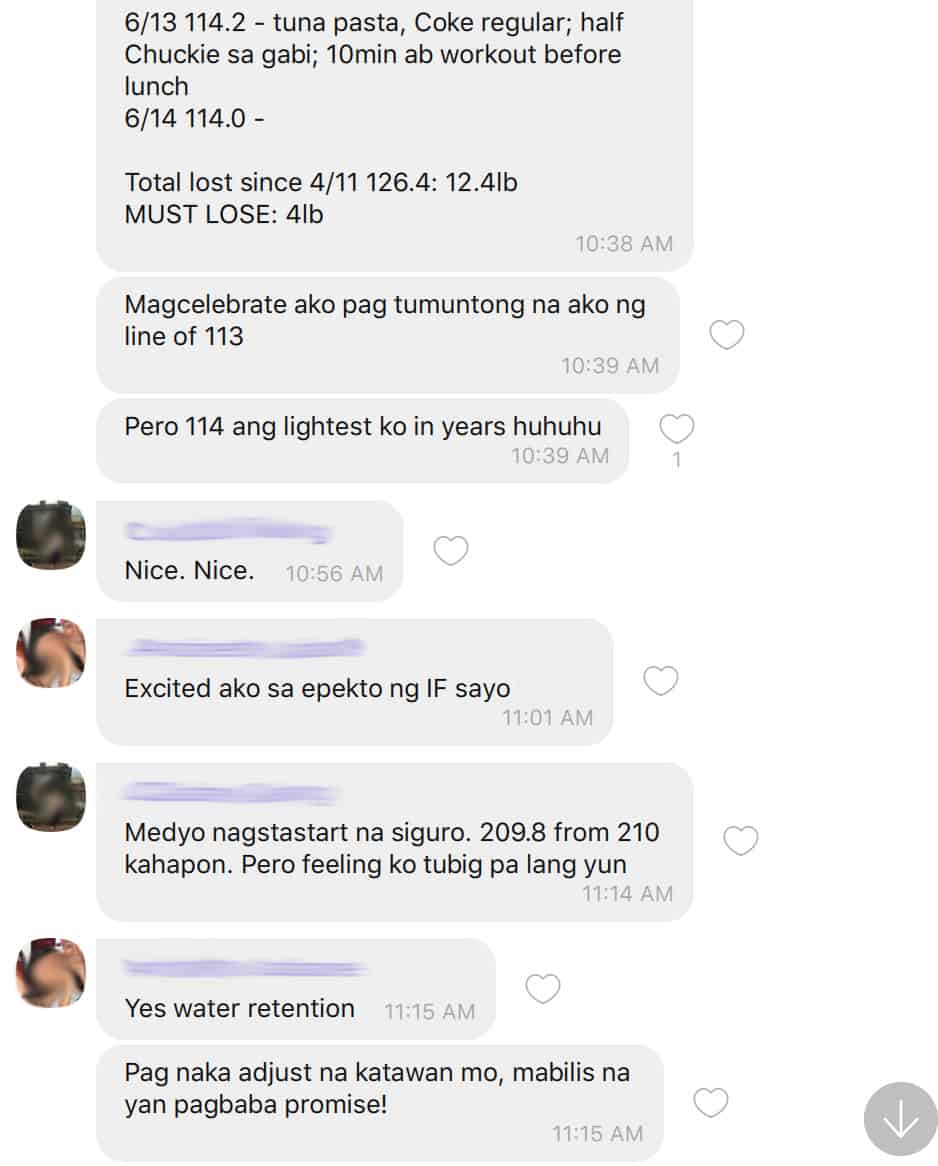 I still have a long way to go. Yes, I have already lost 50 pounds and have reached the ceiling of the healthy weight range for my height. But I don’t want to stop now. I still need to lose 20 more to reach the middle of that range. And I still have a somewhat protruding tummy to flatten.

It is so amazing to read about the weight loss review on this blog. Could you please tell me how I can lose weight? I tried to lose weight for a long time but it didn’t work.