“This is it?” I asked myself in disbelief as I stood on the bank of the stream whose water was flowing across a series of travertine terraces. A crack of disappointment slowly and silently crawled across my chest.

Although I did not say anything out loud, my being underwhelmed must have been so clear that Charlotte, a solitary French traveler whom I met along the way, tapped my shoulder. “I’m sure this is not the main waterfall yet, silly,” she said while pointing at a trail that goes deeper into the park.

And she was right. 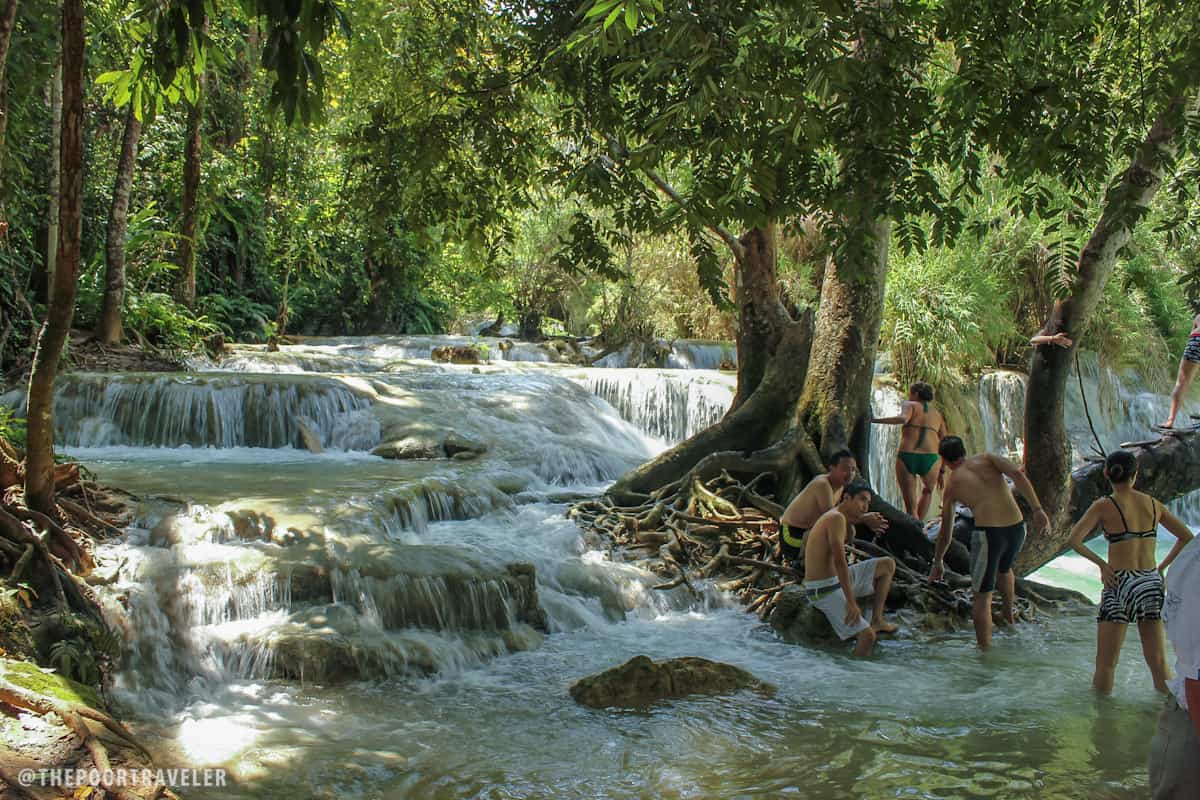 Located almost 30 kilometers south of the city center, the three-tiered Tat Kuang Si (or Kuang Si Falls, Kuang Xi Falls) is one of the top tourist destinations in Luang Prabang, Laos. The naturally terraced mini-pools that I spotted first were not the falls yet. Silly me, indeed. Apparently, at the base of the main waterfall are several mini-falls that drop from low levels and then flow through a train of small pools that look like a grand limestone staircase ushering visitors to the waterfall itself. The main waterfall has a 60-meter descent that is disrupted by the nooks and bumps of the cliffside, creating a stellar splashy cascade.

After getting my ticket, I followed the well-trodden trail into the woods. Two minutes into the trek, I reached the Tat Kuang Si Bear Rescue Center. Established by Free the Bears Fund, an organization founded in 1995, the center has become a home to a number of bears saved from illegal trade and bile farming. It is just one of the many bear sanctuaries built and set up in India, Cambodia, Vietnam, and Laos.

A viewdeck lies parallel the fence for visitors to have a good spot to observe these lovely creatures. At that moment, however, I chose to just take a couple of photos and keep walking. At the center I could already hear the loud rumbling sound of the cliff jumping-happy water. When I had my first glimpse of the stream, I thought I was looking at the falls already when in fact it was just one of the many sets of terraces at the base of a much bigger waterfall. A dozen tourists were taking a dip at the turquoise stream and enjoying the water flowing gracefully from the top terrace down to the sloping river.

I didn’t spot that the trail continued further upward until Charlotte pointed it out and we began trekking again. On the second level was another gorgeous set of falls, taller but still less grandiose than I expected because, once again, the inner stupid in me thought that it was THE waterfall. I assumed that it was based on the sheer number of people at the place. Dozens of tourists were swimming in this part of the stream. Many of them were playing Tarzan, monkey swinging by a rope and then jumping into the crystal clear pool below.

I stayed under the shade of a tree and watched tourists make a splash when I spotted three people enjoying the trickles on their back as they stood before a mini-waterfall — my new friends Josephine, Marten, and Sarah. Josephine was one of my roommates in a dorm in Chiang Mai, Thailand, while Marten and Sarah I met in Luang Prabang a couple of days before. Josephine, like Charlotte, is a solo backpacker from France, and Sarah and Marten a German couple on a romantic getaway. They’d been swimming in the natural pool for over an hour already and they urged me to go soak with them. I didn’t bring any extra clothes so I had to pass.

“Have you been to the waterfall?” Josephine asked.

So this is not yet the falls? I thought for the second time that morning. I mistakenly assumed again that I was already seeing the main waterfall. Apparently, it was just another level of what I was starting to believe to be a stellar waterfall.

“You should go there now,” Josephine suggested. “It’s absolutely beautiful. And then, just come back here after.”

By this time, Charlotte has wandered on her own so I had to explore the place alone, which was fine because the site isn’t that big anyway. I followed the trail uphill and the sound of the rushing water got louder and louder with every step I took. There was a cafe along the trail where some tourists enjoyed a cup of iced drinks and ice cream while getting blown away by the marvelous view! It was here that I first laid eyes on  a steep cliff with volumes of freshwater cascading from the very top, which was almost concealed by the mist created by the droplets bouncing about from the splashes. At that point, I mumbled, “This has got to be it. It has to be.”

The sight overpowered my thoughts that everything that ran through my head was about how beautiful and majestic and grand this waterfall was. It was overwhelming. One of the best waterfalls I had seen in my life. It was so hypnotic that I just found myself standing right in front of it, on the bridge that spans to the other side of the river. My face was drenched because the waterfall had sprayed me with cold droplets. I had completely lost track of time and I had no idea how long I stood in front of the cascading water when Charlotte found me.

“Amazing, isn’t it?” Charlotte smiled at me.

“Absolutely,” I answered while we both wiped off the moisture that our lens filters had collected. Although struggling, I then took photos of the natural wonder in front of us as my heart drowned in indescribable awe.