Here’s how to get to METEORA from ATHENS AIRPORT or ATHENS CITY CENTER by train, bus, taxi or rented car. We also included ATHENS-KALAMBAKA TRAIN AND BUS SCHEDULES for your reference.

I first learned about Meteora through a viral Facebook video featuring the monasteries perched on towering rock formations. Immediately, I checked the location of this UNESCO Heritage site. Without checking its accessibility, I immediately assumed that it would be hard to reach given its lofty location in Thessaly, Greece.

When we finally had the opportunity to visit Athens, I didn’t think we could include Meteora in our itinerary. “Too far,” I said to myself. But then the great people working for the Municipality of Athens invited us to go on a day trip to other parts of the country. Imagine my surprise when I saw that Meteora was part of that list. Apparently, this heavenly destination isn’t too hard to reach.

It takes 4 to 5 hours to travel from Athens to Meteora. While it is possible to do a day tour from the capital, we still recommend that you stay overnight, at least, to be able to maximize your time.

There are two towns lying at the foot of the Meteora cliffs: Kalambaka and Kastraki. Between the two, Kalambaka is bigger and has more lodging, dining, and tour options. To get to Meteora, you need to find your way to either of these villages. But in this post, we’ll be focusing more on Kalambaka, since it’s a more ideal base. In Greek, the official name of the town is Kalabaka, but it is also often called Kalambaka or Kalampaka. Don’t be confused. They all refer to the same town.

Anyway, here’s how to get from ATHENS TO METEORA by bus, train, taxi or private car.

It’s easy to reach Meteora by train. Kalambaka has its own train station and is connected to Larissa Train Station, which is the central railway station in Athens.

As mentioned, you can either take the direct train or connect in Paleofarsalos. As of October 2018, here are the details. The yellow-highlighted row is the direct trip.

However, some dates may have fewer trains so double check the official website when planning you trip.

Below is the bus schedule from Kalambaka to Meteora. This only applies to the period of March 16 to November 30. The bus will stop in all six monasteries. No bus service in winter.

The yellow-highlighted row is the direct trip.

There are no buses that go directly to Meteora or Kalambaka. Instead you will have to travel by bus to Trikala, the city closest to Meteora, and then transfer to another bus to Kalambaka. 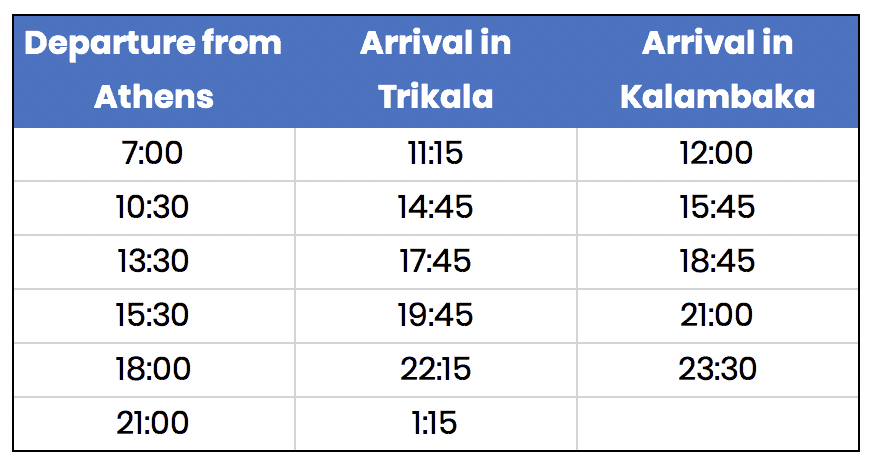 Below is the bus schedule from Kalambaka to Meteora. This only applies to the period of March 16 to November 30. The bus will stop in all seven monasteries. No bus service in winter. 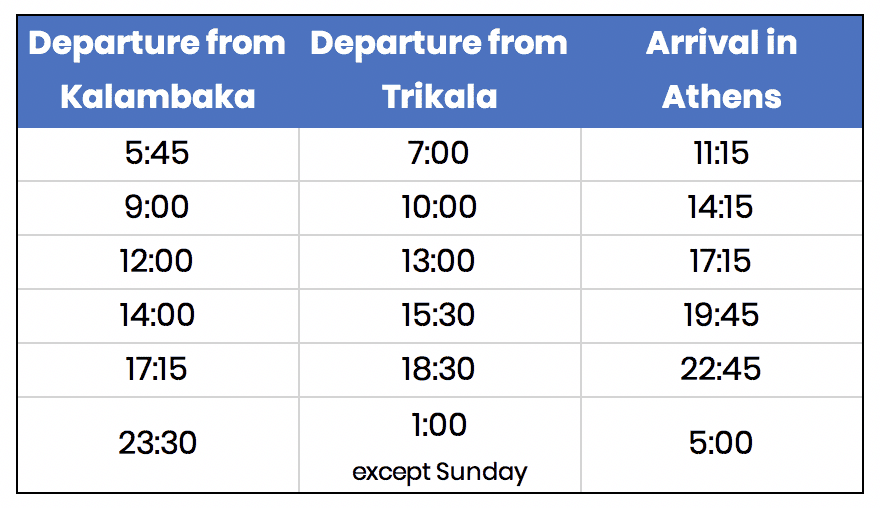 For those who prefer to drive, a lot of options await you in Athens. Several car rental companies operate in Athens. Some of the most well-known and best-reviewed brands are Hertz, Avis, Alamo, Europcar, and NU Car Rental.

Standard price range for a compact or economy car is from €25 to €35 per day. You’ll find cheaper options, sometimes as low as €7 per day, excluding taxes and other fees. But read their reviews first before making a reservation.

The most challenging part of the journey from Athens to Meteora is actually the first hour, when you’re trying to get out of the city. Traffic can be terrible and unpredictable so it is best to avoid rush hours. In general, leave in the early morning, while it’s still dark to avoid the traffic build up.

Once you’re out of the city, everything will be a breeze. Hit highway E75 until you reach Lamia. From here, you will be negotiating Domokos mountain range, so expect lots of curves. Just follow the road signs and you’ll be passing through Karditsa, Trikala, and Kalambaka.

By Taxi or Private Car Service with Driver

If you’re visiting Meteora on a day tour from Athens and you’re celebrating something special like honeymoon or anniversary, you might want to consider Welcome Pickups. At €490, it’s definitely on the pricier end of the spectrum, but it comes with full service.

You’ll be picked up and dropped off at your hotel by an English-speaking driver. The car has its own free wifi. You’ll also make a brief stop at the Leonidas of Sparta and the 300 Monument along the way. After visiting the monasteries, you’ll also get to visit Kalambaka Town for your lunch stop.