Over the past several years, Sagada has emerged as a popular destination, especially among adventurers and soul searchers. It is most famous for Sumaguing Cave, Blue Soil Hill, Bomod-ok Falls, and the Hanging Coffins, a traditional way of honoring the dead, which is still practiced to this day. But when the film That Thing Called Tadhana featured it in its most iconic scenes, this quiet town made a permanent mark on pop culture as a romantic destination.

But Sagada isn’t the easiest to reach. From Manila, it is quite a long drive. For the longest time, the most common way to get there is by first going to Baguio and catching another bus to Sagada. But more options have been made available over the past couple of years. The most convenient is the DIRECT BUS, which can take you from Quezon City (in Metro Manila) straight to Sagada overnight.

In this post, we’ll discuss these two options in detail: by direct bus and by making a stop in Baguio.

Manila to Sagada by Direct Bus 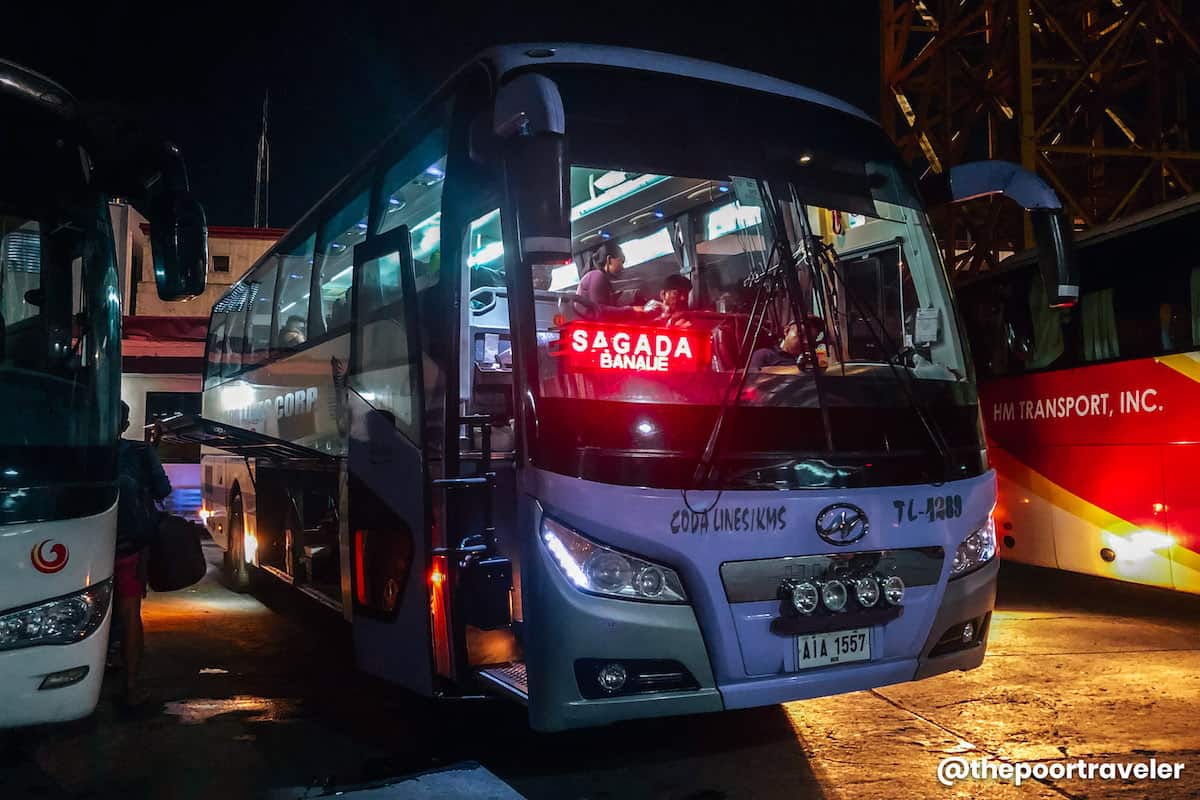 Coda Lines Corporation offers a direct transit between Manila and Sagada via Banaue and Bontoc. The company shares the bus terminal with HM Transport in Cubao along EDSA-Southbound. There are two types of bus: Semi Deluxe Bus (No CR) and Super Deluxe Bus (CR Onboard).

Will there be stopovers for Super Deluxe Buses? YES! Same as the stops that Semi Deluxe Buses will make. 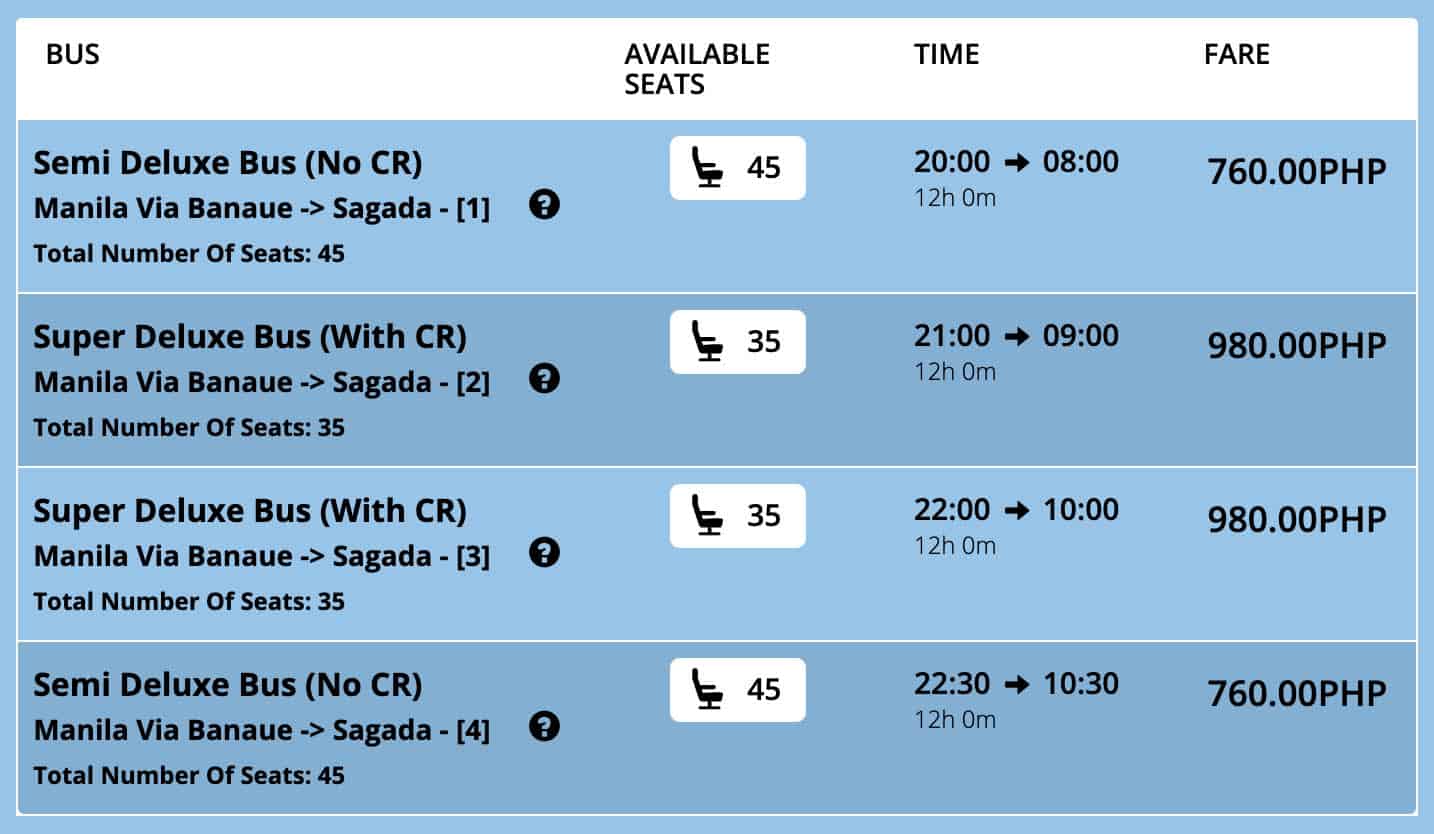 Time of Departure: All are OVERNIGHT BUSES. You can sleep during the ride and when you wake up, you’re already in Sagada!

Please be at the terminal at least thirty minutes (or an hour) before departure time.

Fares: P760 (Semi Deluxe) and P980 (Super Deluxe). It’s highly recommended to book your seat in advance to secure your slot. They prioritize those who book online. It’s a bit risky to do walk-in as seats can run out real fast. There’s an admin fee of P35.

Here’s how to book online: 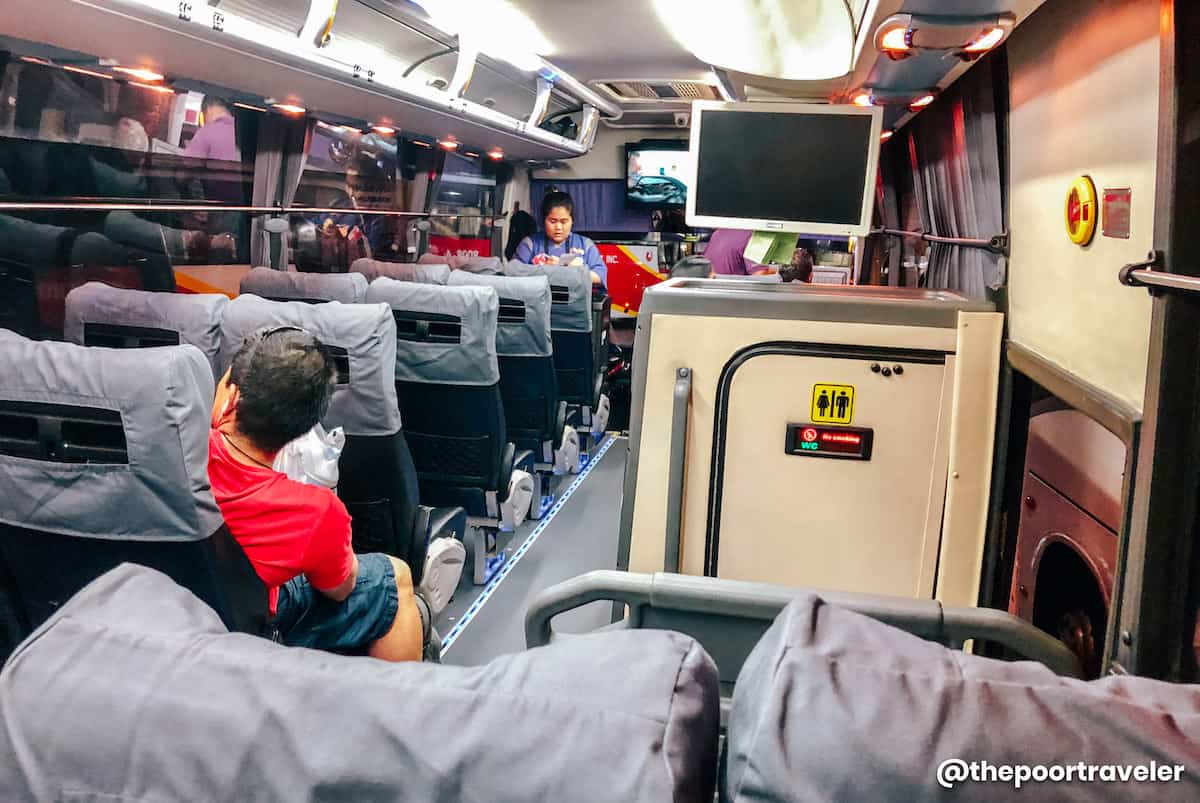 Manila to Sagada via Baguio

It is also possible to reach Sagada via Baguio. This involves a change of bus and terminal in Baguio City. A number of companies offer bus services to Baguio, but two of the most popular are Victory Liner and Joy Bus. These are also the only two we have tried, so we’ll be focusing on them.

Victory Liner has terminals in:

To see the full schedule and fares of JoyBus and Victory Liner buses, check out: MANILA TO BAGUIO BUS SCHEDULE.

If you can, choose a late night bus so you’ll arrive in Baguio in the early morning because the last Sagada-bound bus leaves Baguio at either 11:30am or 01:00pm.

GL Trans and Lizardo Trans are the two bus companies that offer the Baguio-Sagada route. Between the two, GL Trans is more recommended by our local friends.

At the GL Trans Terminal, approach the counter and purchase a ticket to Sagada, which costs P220.

As of writing, here are the schedule and routes:

Notice that the latest departure time is at 1:00 PM. If you are coming from Manila, make sure to be in Baguio before the last bus departs. It’s better to arrive early in the morning to guarantee the transfer to Sagada from Baguio to give you time allowance and save you from the hassle and stress. Note that the seats can sell out fast, especially on weekends, that even when you arrive at 10:00 AM, the bus departing at 11:30 AM is already full. 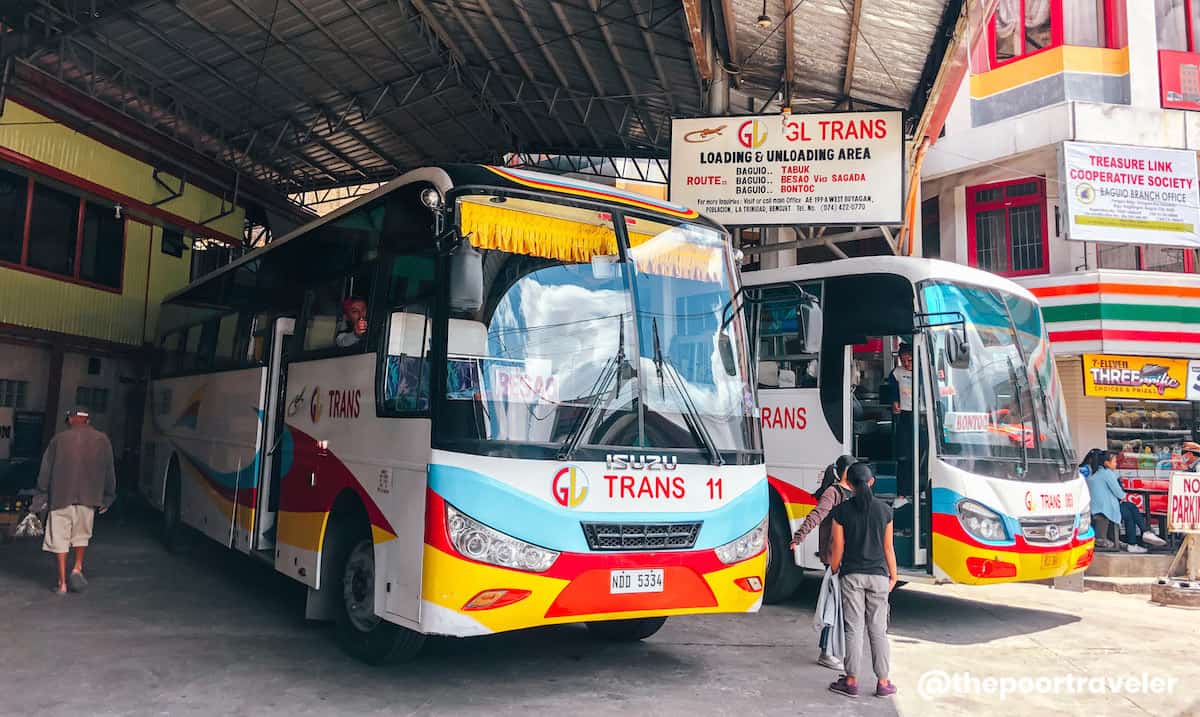 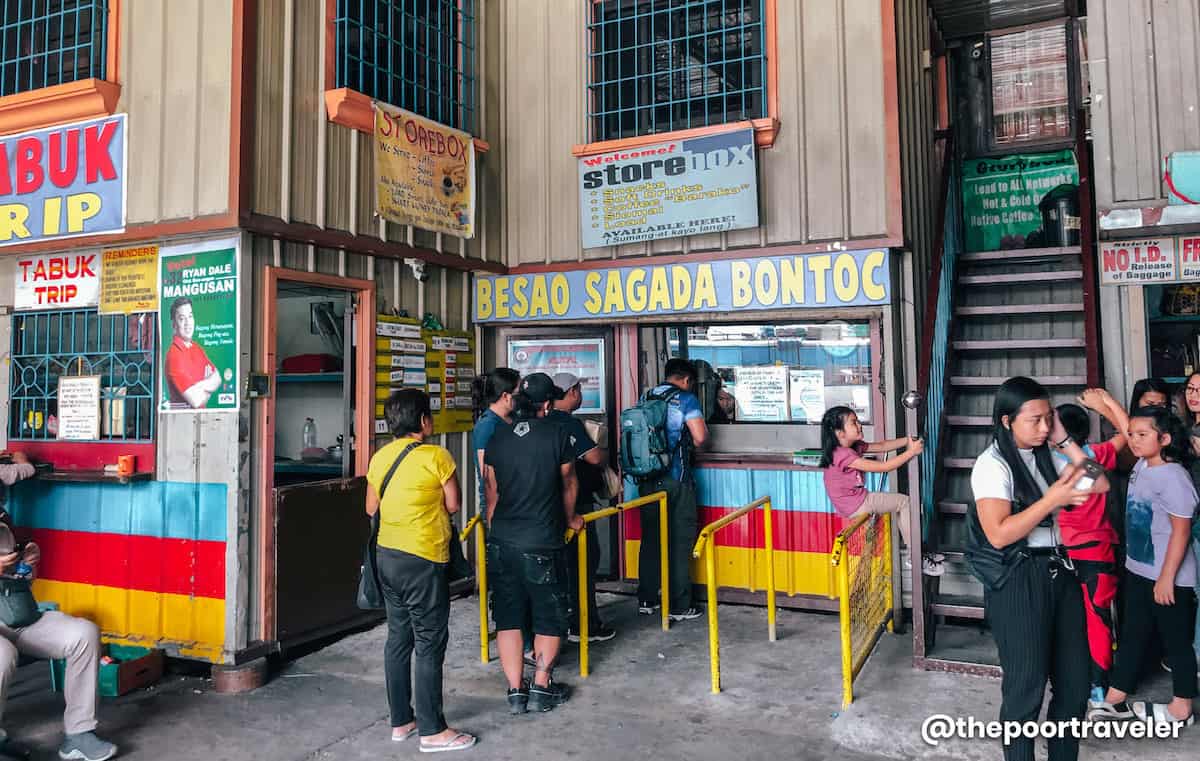 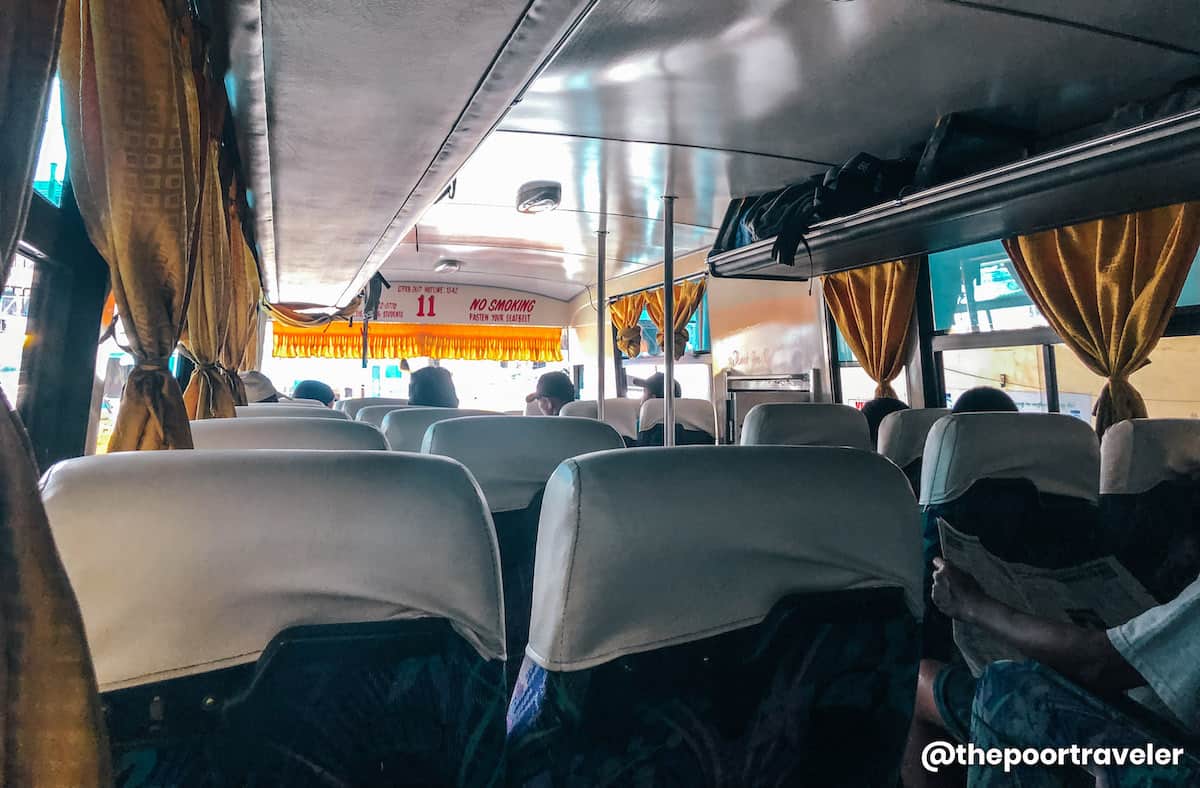 Hi! Just went over this guide and was wondering how you’re going to go back to manila from sagada? Do they offer a direct bus from the place to mnl too?

Thanks in advance and your blog rocks!!!

Hi Sheki, yes, they have return trips too. All are overnight journeys too. Pickup is at the same spot as the drop off (at Sagada junction).

Hi I just wanna know. Can I go to the Terminal in Pasay to buy tickets in advance?