The journey may be a bit too tough for us but the destination was all worth it. After getting lost in the beautiful island of Guimaras, the Poor Traveler and his friend finally found a place to stay.

Although not planned, we decided to just check in to Raymen’s Beach Resort along a strip of white beach called Alubihod in Guimaras. We were welcomed by courteous staff and were offered an air-conditioned room for two.

After settling down, we went out and explored the area. We were greeted by sparkling white sand and clear water.

We did not dive into the water right away because we planned to have lunch first at the resort’s restaurant.

The Poor Traveler and his poor friend ordered chicken tinola worth P250. They said the each order was good for two. They lied. It was good for four to five people. In fact, we had to stop gorging on that darn tinola for a moment to give our digesting system a little more time to do its job well. We spent 30 more minutes at the restaurant to finish the meal. Yummy, alright. It wasn’t native chicken but after a long, exhausting trip, anything chicken was gourmet to us.

And then we finally went swimming. The place was not crowded. There were only four groups of people in the whole strip, us included. We all had our place in the sun, so to speak. 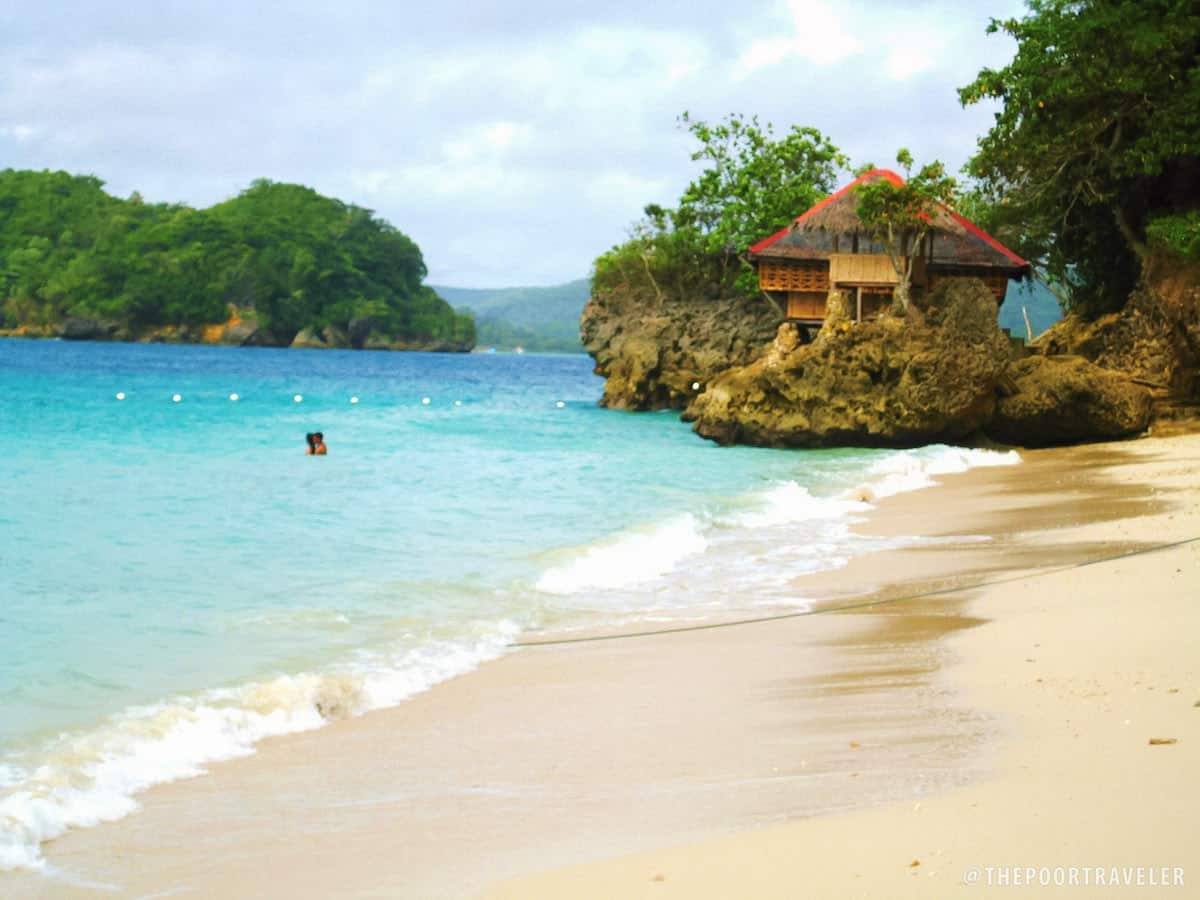 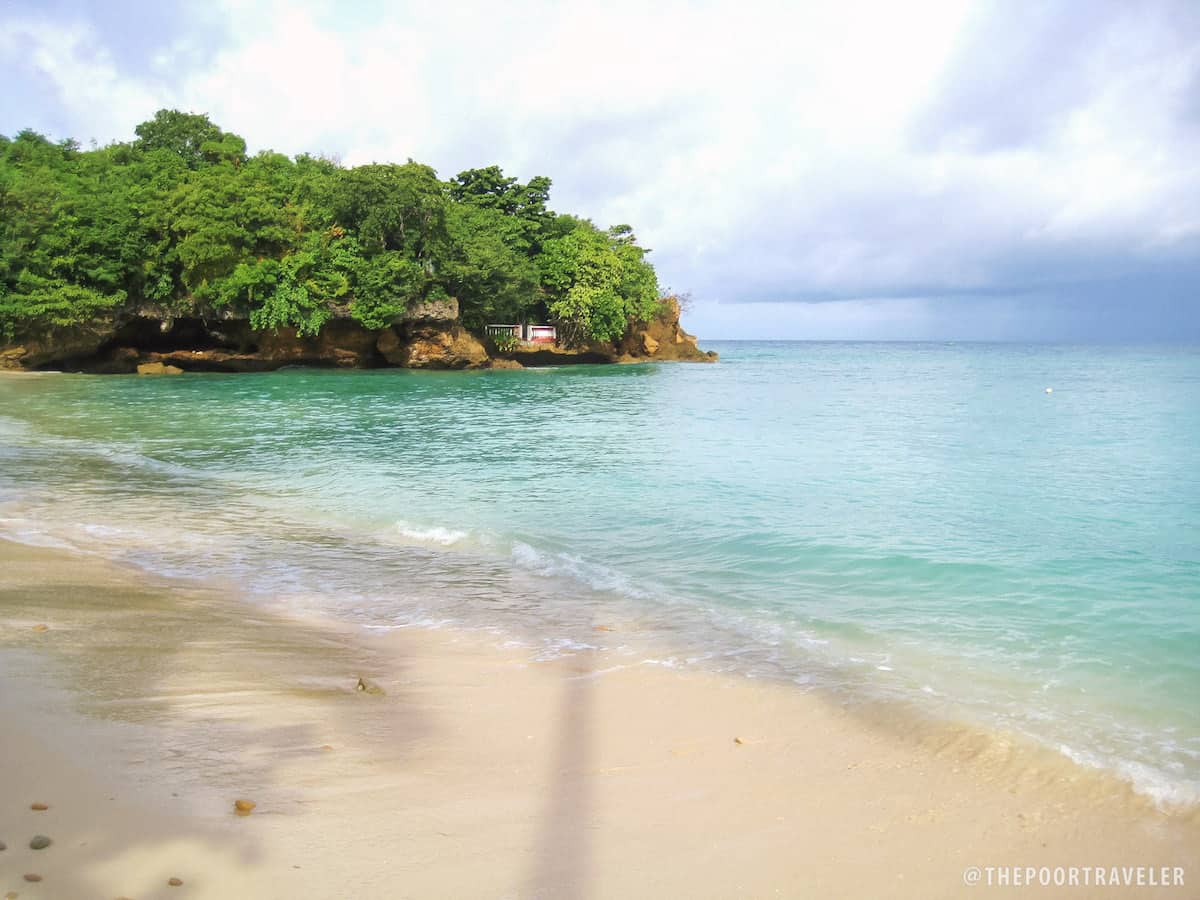 After a couple of hours of basking in the sun, we called it a day and headed back to our room. There wasn’t much in the room, no TV set or anything but it was alright. It gave us a much needed away-from-the-violent-jolt-of-the-city we desperately needed.

We decided to take a rest for a while before having dinner, around 8pm. The next thing we knew, it was morning. That’s how tired we were that day.

We started the next day with a breakfast at the same restaurant. (We had no choice, actually. It was the only near eatery in the area but we’re not complaining.)

We had another round of swimming and camwhoring before packing up our things to leave.

We took a trike back to Jordan port but the trike driver had a brilliant idea. he offered to take us to the Trappist Monastery, a popular tourist spot we didn’t know about. He said the place was just along the way so it was alright with him.

We bade goodbye to Guimaras when we hopped onto the boat going to Iloilo City.

Our Guimaras adventure was short, yeah. But it was unforgettable. Like we said before, we should’ve planned our trip. We could’ve had a much more enjoyable time. For example, if we did our homework, we would have known that it wasn’t mango season so we won’t get to taste the world-famous Guimaras mangoes.

Also, we could’ve availed of the mango butterscotch from the Trappist Monastery souvenir shop, which was closed at the time.

Here’s hoping you learn from our mistakes. Cheers! LOL.

Despite our bad judgment and lazy attitude, we still had a great time. Thank God Guimaras was such a paradise regardless whether the trip was planned or not.

Here are the total cost of our Guimaras trip. Note that this trip was for two people.

That’s PhP1,038 per person excluding the airfare. Remember that you’d spend much less if you take a jeepney from Jordan port to Alubihod. There were also cheaper rooms in Raymen but we were choosy people, forgive us.

i could not stop smiling while reading your adventure. ;)

as to Trappist’s mango butterscotch, they are also available in Iloilo City, just among the many products of the monastery.

Trappist Monastery, the place where i want to stay when i grow old.

alubihod’s offer is limited. for those who want more of guimaras, i suggest you try VILLA IGANG RESORT or BARAS BEACH RESORT, their places are more spacious and inviting; you can stroll and discover good jump sites! also, i suggest SEAFDEC Igang Station as part of your Island hopping or coastal activities. :D

is there a direct flight from manila to guimaras?

There is no direct flight from Manila 2 Guimaras, Iloilo is the gateway to Guimaras. Don’t worry, the trip from airport 2 seaport would only take more or less 3omins and the boat ride about 10-15minutes and the sights along the way is well worth it. And Raymen is d place 2 be when in Guimaras… awesome white sand beach and delicious food, not to mention courteous staffs… and who can beat Php10.00 entrance fee? and free if you check in @ d resort… what are u waiting for? come visit us here in Iloilo where paradise is…

yeah we are thnking to stay 1 nyt 2days or 2 nyts and 2days at guimaras. And we are currently reading things to do and where to stay in guimaras.

dude..guimaras is a haven place..if only u could visit more of the undevelop beaches in guimaras like the Guisi beaches located at dolores, nueva valencia..the tiniguiban islet were red shrimps can be found..u’ll say its really a paradise..thank u for making and saying how courteous guimarasnon are..we’re proud we’re guimarasnon.. blessed with bountiful environment…..

Your post has a humor and I love it. I already read more of your post and it keeps me smiling hehehe. We will go to Guimaras next month and thank you for the guides you gave. :)

We’ve been there!the place is so beautiful!the sands are so powdery white!yet their hotel accomodation is so cheap and very nice hotel too!=)me and my family wanted to go back and spend another summer there..=)

how far is raymen resort from the main pier at guimaras?

Didn’t they offer you island hopping package?it’s a 2-3 hour boat ride and you will be taken to at least 5 stunning islands. If u experienced it, you’ll probably realize Guimaras is more than paradise

Can someone help me plan iloilo/guimaras trip? its our anniversary and i want it to be memorable :) or can you refer travel agency/person that offer cheapest rate?
i want to stay in guimaras and 1 night in iloilo. our flight is on sept 30-til oct 2. Thanks in advance

Hi is there any need to book a room before going? If so, would you mind sharing their contact numbers.. tried searching in the net but i cant find one.

Hi Lyra, this is a very, very old post. Not sure if operational pa sila.