Travel like a local, they say. But if you’re going to do that in Manila, brace yourself. You’re in for quite a ride.

Taking public transportation within Metro Manila is unpredictable, to say the least. For first-timers, commuting around Manila requires a great deal of planning.  You have ample of options — MRT, LRT, cab, bus, jeepney, tricycle — but none of them guarantee a hassle-free journey. Manila has so much to offer to tourists, but the problem is getting from one destination to another. The simple truth is, like many third world cities, Manila is congested, polluted, and highly disorganized. Except for outbound buses, none of these options work around a fixed, reliable schedule. Traffic has been the biggest problem. And the rain can make matters much worse.

Take a deep breath, hold your valuables tight, and prepare your soul to be squeezed out of your body! This is commuting, Manila-style. Updated: September 2018

Here are some things you have to remember before you start exploring.

If these crazy hours catch you on the road, I suggest that you let it pass. There’s a lot to do in Manila, anyway. Go malling, watch a movie, or kill time at a cafe until the main roads stop being a massive parking lot.

There are a few train lines that straddle the metropolis including LRT1, LRT 2, and MRT 3. These lines are interconnected, which should make things easier in theory. But they are not really “fully” in synergy. For example, MRT-Taft and LRT-EDSA stations are linked, but one must still exit the MRT station and purchase a separate ticket to board the LRT. This requires another queuing, which can take much time.

TIP: You can bypass this by getting a BEEP card, which is a reloadable card that you can use at all train lines (LRT 1, LRT 2, MRT 3) and the BGC bus. You can get it from a teller booth or through a ticket machine at the station or at Family Mart.

The MRT-3 (Metro Railway Transit System, aka Blue Line) spans the length of EDSA, the major artery of the capital. Why take the MRT? It’s fast, and it connects many of the key attractions in five cities: Pasay, Makati, Mandaluyong, San Juan, and Quezon City.

For starters, the shopping malls. A ride from one end of the MRT to the other will give you a tour of the metro’s most popular malls — all fifteen of them (the last time I counted): from the Metropoint Mall beside Taft Station to Trinoma just next to North Avenue Station. In Makati alone, the poster city of commercialism in the country, lies a cluster of malls: Greenbelt, Glorietta, Landmark, and SM Makati. Anyone who has been there will tell you that it has everything — from a simple quirky store selling simple quirky stuff to high-end branded boutiques selling high-end branded stuff.

The LRT 1 runs through four cities: Pasay, Manila, Quezon City, and Caloocan. Manila takes the greater fraction of the line. If you wish to visit the top historical and cultural attractions, LRT1 is your line.

The cliche is right. It is not the destination. And a ride across Metro Manila is quite a journey. For instance, an MRT ride allows incredible panoramic views of many parts of the metro! But during rush hour, this is probably the least of your concerns.

The city buses plying the major routes are divided into three types: A, B, C. The first two have alternate stops, while the last stops at every loading/unloading area. This Rappler infographic explains it succinctly. Click on the pic to enlarge.

Buses are probably the biggest problems of the major roads in the city. Trust me, I live and work along EDSA. Every single day of my life, I watch these buses break traffic rules and create jams while they’re at it. They are assigned their own stops, but many stop anywhere regardless. They are assigned their own lane, but they still invade the other lanes regardless. And they wait for passengers for, like, forever, as though waiting for Jesus Christ to come aboard and begin the Rapture.

Again, taking the bus during rush hour may not be the best idea in the world. Unless you are with someone you are willing to be stuck with for a couple of hours or so.

One sliver of hope is the P2P bus.

If you’re coming from the airport, taking the P2P bus is a good option.

The past couple of years saw the launch of P2P buses. Genesis Transport operates the buses to Clark (via Resorts World and Robinsons Galleria, Ortigas) and UBE Express runs the rest. Here are the routes, fares, and operating hours.

There are four routes that are clearly illustrated on this map.

Here are some reputable taxi companies and their contact numbers:

You can also hail a cab using the commuter app GRAB.

Cab fare is a lot higher than the jeepney, MRT, or bus fare. But there are cases when taking a cab cannot be helped or makes a bit more sense. For example, when you’re a group of three or more, you can simply split the cost. 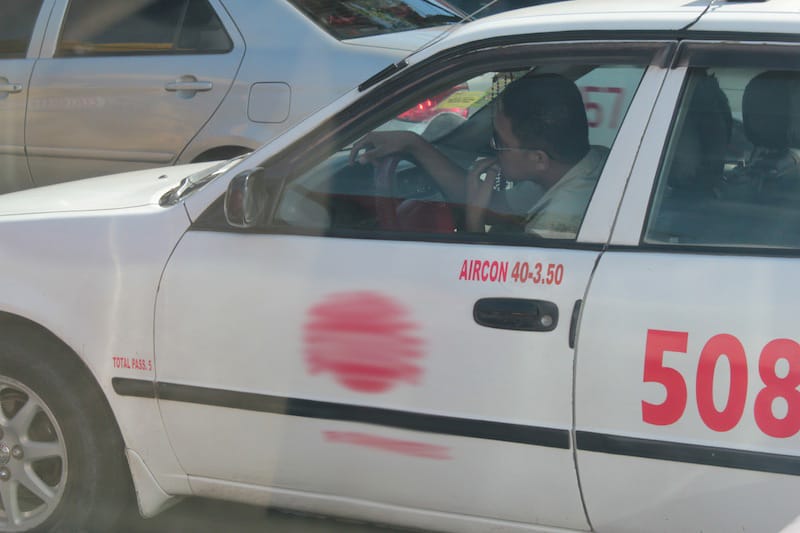 Jeepneys have become an icon of the Philippines. These colorful rides are best for short distances. It is cheap (PhP8 for the first 4 km) and fast, since many of them do not take major thoroughfares.

The jeepney is like a mini-bus. It plies a specific route and it can’t veer away from that. If your destination is not along the way, you’re gonna have to get off at the nearest spot, and make your way on foot or by tricycle (if available) to your exact destination.

Uncomfortable is definitely an understatement during rush hour, but it gives a pungent taste of what most locals need to go through on a daily basis. You will probably notice how many passengers are being serviced every day and wonder how much the government earns from all these fares and taxes. And if while traveling you find yourself thinking about why people endure this, why there can’t be more trains or have a more efficient system, when it will improve, why it hasn’t improved yet, or whether or not it will in the first place, then CONGRATULATIONS, you’re now one of us.

If you’re used to UBER in your country, you can try GRAB in Manila. Grab is a ride-sharing app just like Uber. Uber used to operate in the city but their Southeast Asian business was acquired by Grab in early 2018.

If you have a smartphone, you can just download the GRAB app and you can charter a taxi or a private car with it. You can pay cash or by credit card.

It’s reliable and cheaper than in other countries most of the time. The only criticism I have is that it’s hard to get a ride these days because the number of cars or taxis in their system can’t keep up with the demand. Hence, don’t try to book a ride at the last minute. Always have time allowance so you reach your destination on time.

Manila is simply a maze, and these are really great tips!

You might want this additional info that’s perfect for foreigners who hate overpricing/haggling!

By Taxi:
Book a taxi with GRABTAXI App for a safer, faster, and more convenient ride!

2. Book a taxi with your smartphone in just 2 taps of a button!

Hey PoorTraveler. I love your post. This is definitely true! I’ve experienced this everyday especially when going to work. The rush hour and floods are really annoying. That’s why right now I am looking for house for sale philippines near makati but I heard that floods is also a problem on that area.

Love your post! Great for people who are curious to check out Manila!

[…] you’re here, take a look at this helpful post about getting around Manila via other public means: jeepney, mrt/lrt, taxi, […]

Thanks for this great post. I also lived in Manila and created my personal list of the best ways to get around in Manila.
Would be nice to hear what you think of it.

About buying different tickets for the various train lines, we now have the BEEP Card, which you can use across the 3 lines. You can buy the card at the stations but you can load them also at Family Mart Convenience Stores.