Last updated: MARCH 4, 2019. Schedules might have changed since then. Please contact Genesis Transport for the updated timetable.

One of the best things that happened for travelers from Metro Manila and Central Luzon is the launch of the Premium Point-to-Point (P2P) Bus service from Manila to Clark Airport.

Direct bus trips to Clark from Manila are not new. PHILTRANCO has been operating this route for years, albeit with only five trips per day. But the P2P buses provide more options and pick up and drop off passengers from all NAIA Terminals as well as a few key stops like Robinsons Galleria (Ortigas), and Trinoma. These buses are also more comfortable, with fewer seats, bigger legroom, and working wi-fi.

IMPORTANT! This post was last updated in March 2019. Although we try to do our best, we cannot guarantee that the info below is up-to-date all the time. We only rely on the timetables released by GENESIS TRANSPORT and posted at public spaces. We still strongly encourage you to call GENESIS TRANSPORT directly for the latest schedules.

Here are the exact locations of the pick-up and drop-off spots of P2P buses n Manila. NOTE that the NAIA 2 and NAIA 1 stops are for DROP-OFF ONLY. You can’t board the bus from there. If you’re coming from NAIA Terminals 1, 2, or 4, you will have to take a cab or Uber to Terminal 3 (Bay 14).

If you’re coming from Terminal 1 or Terminal 2, you need to make your way to Terminal 3 first. 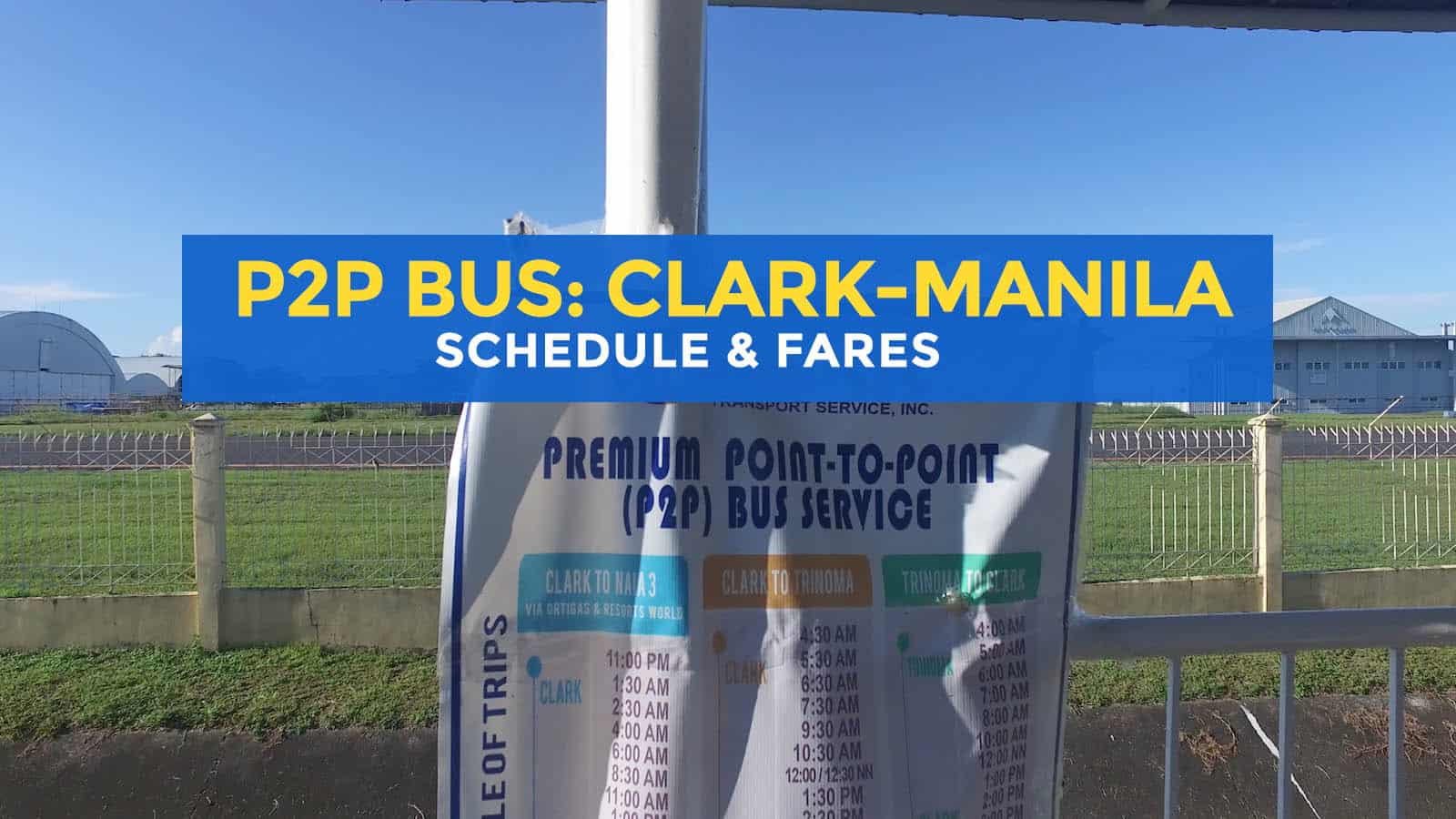 Below are the most updated timetables as of November 2018. The good news is: there are now more trips per day. The additional early morning trips will definitely help those who have a morning flight to catch in Clark. There are also Joy buses operating 3 times a day between NAIA and Clark.

Update: Fares have recently increased, so the rates in the artworks below might be lower than actual current fares. 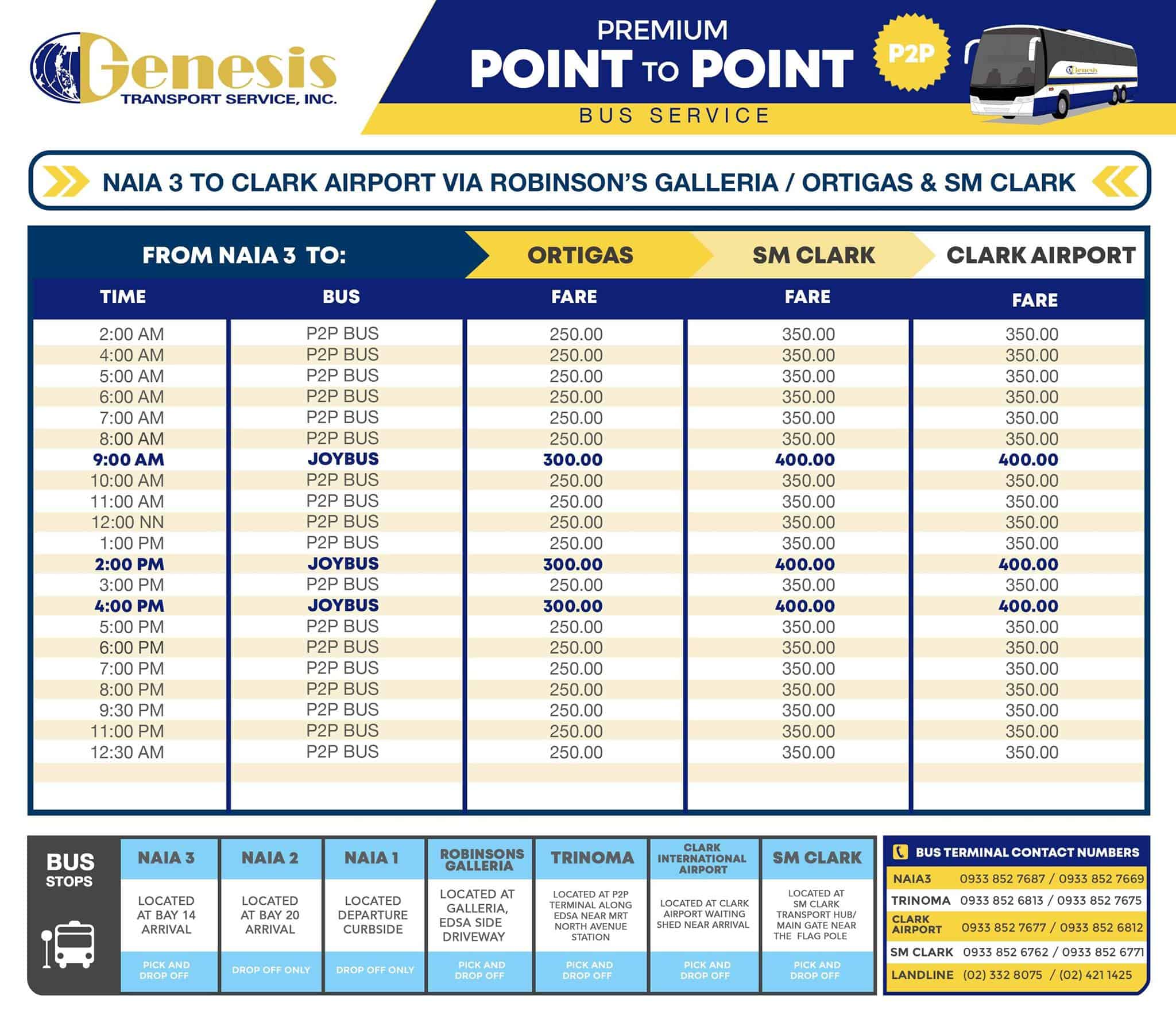 IMPORTANT! There are user reports that buses skip Robinsons Galleria now. Still no new updates from Genesis. Been trying to get confirmation from Genesis, but they haven’t been replying to our messages. 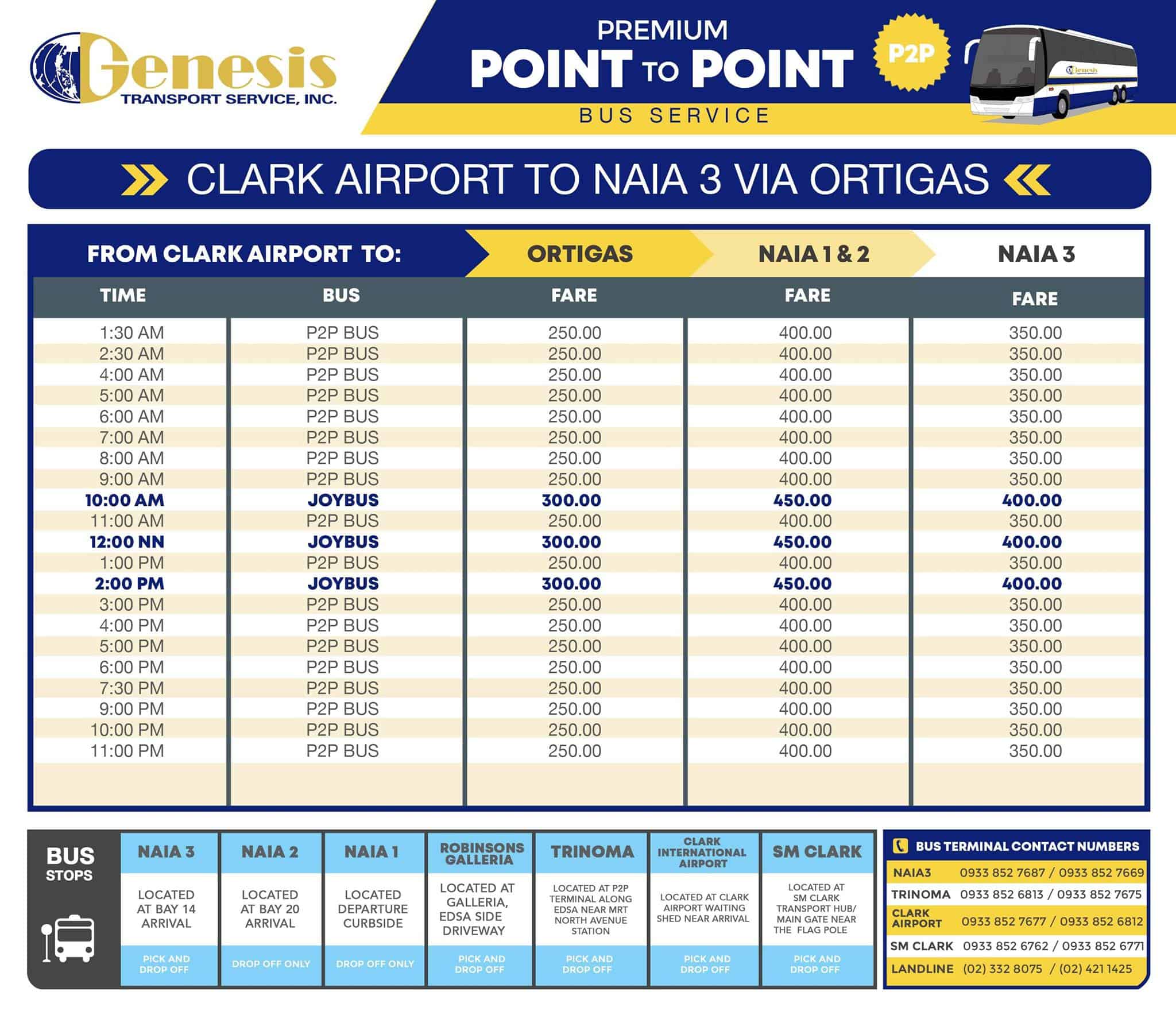 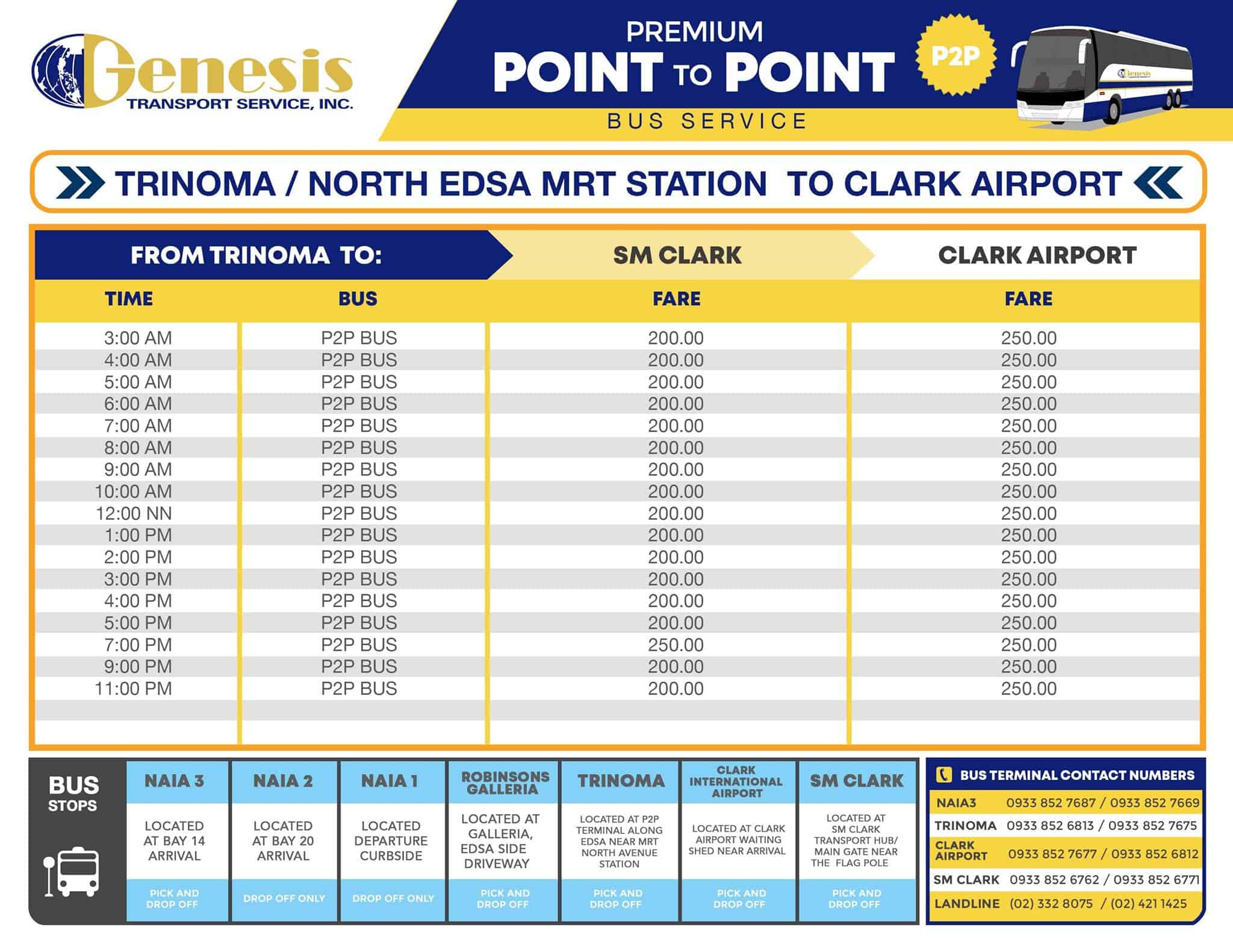 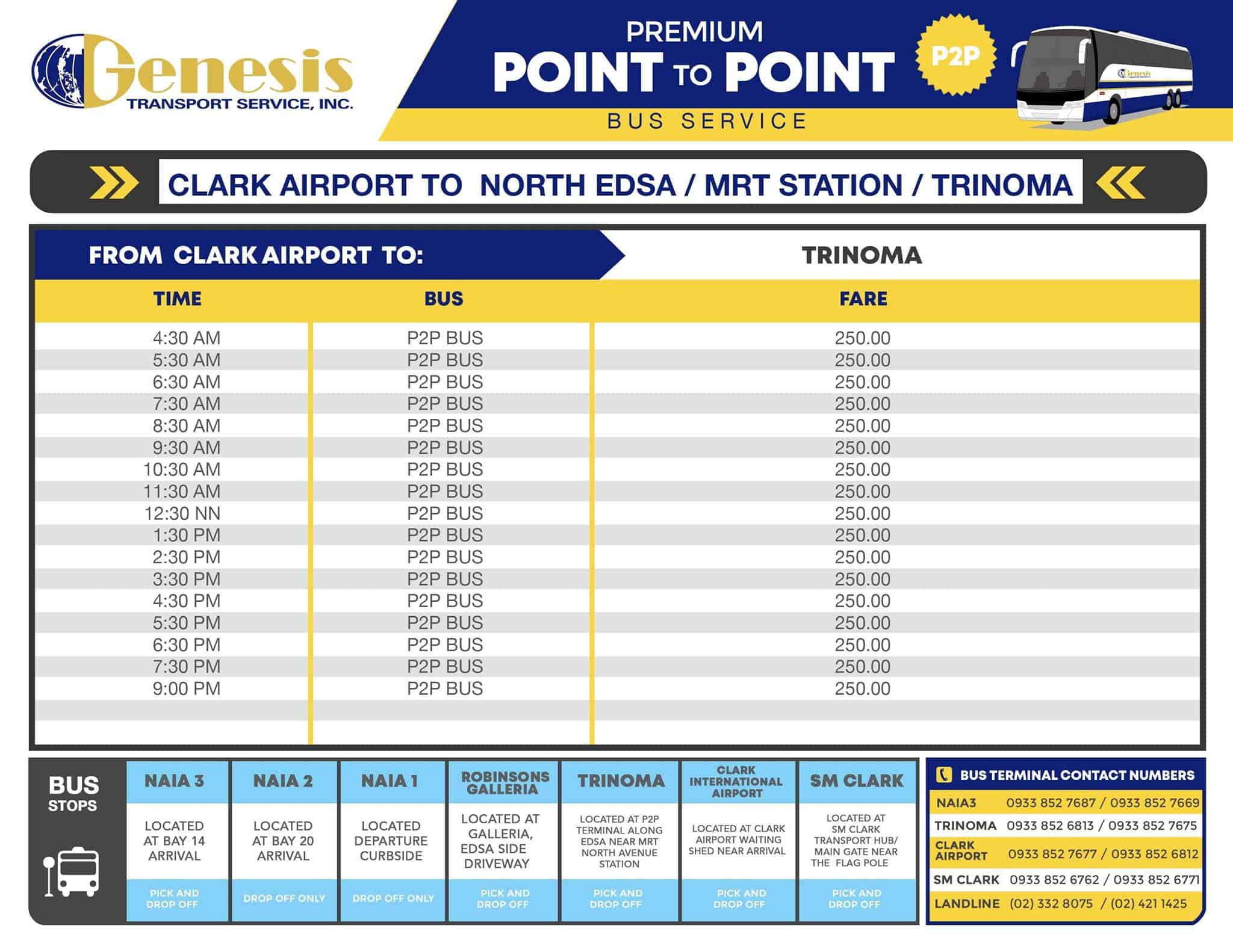 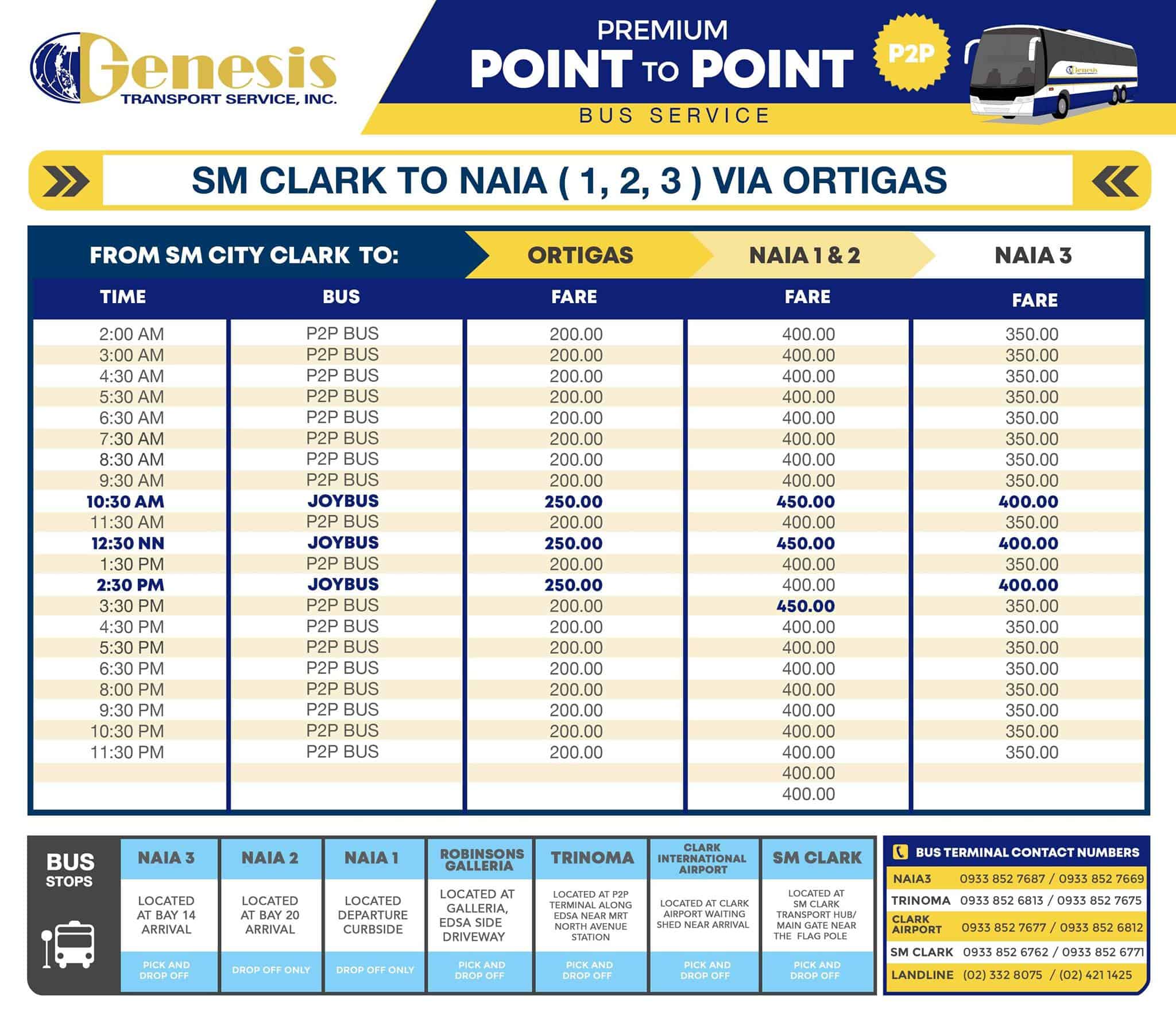 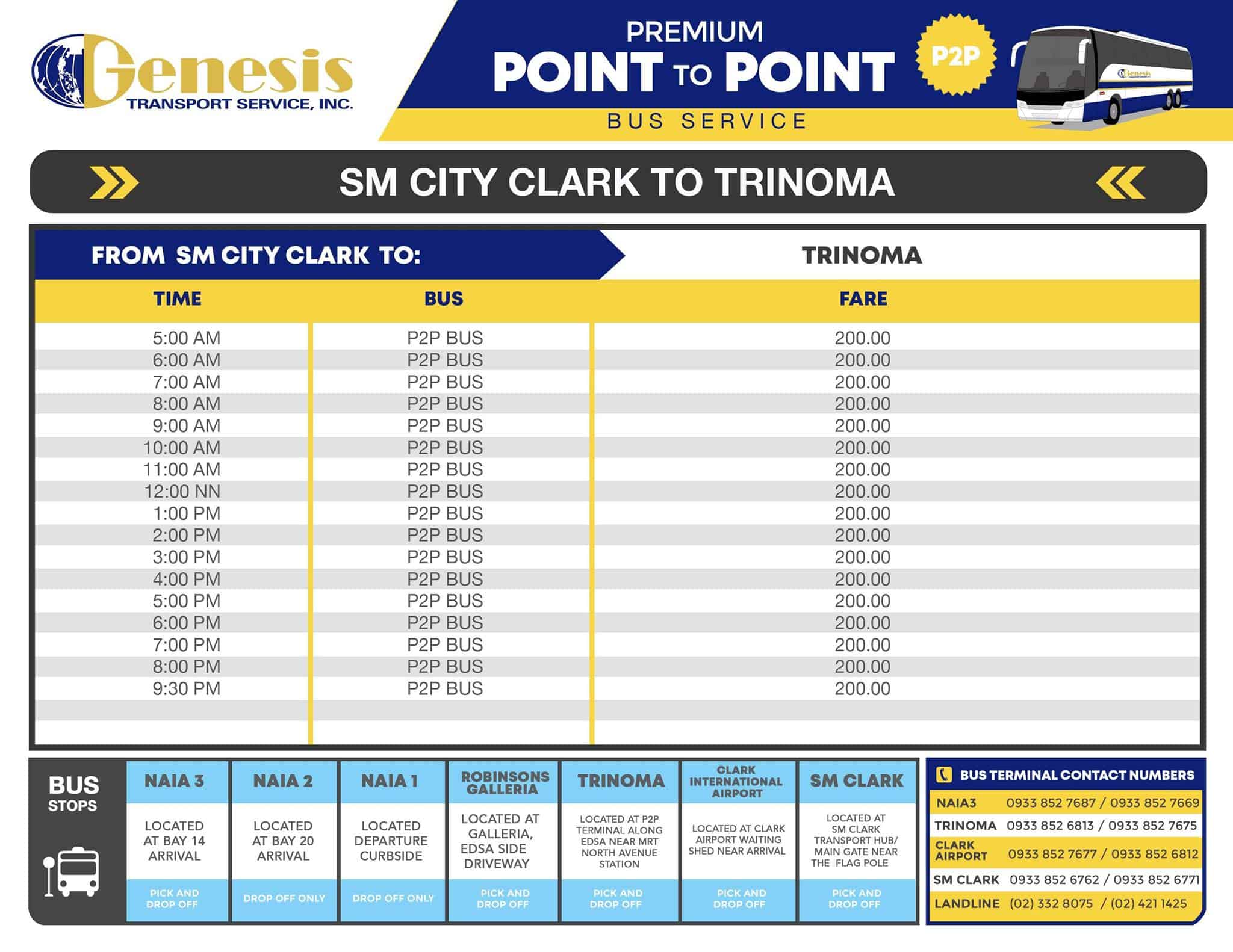 Images above courtesy of Genesis Transport.

Where to Stay Near Clark Airport

If you don’t want to take a chance or you’re trying to catch a very early flight, you can spend a night in Clark. Here are the top hotels according to Agoda customers.