Visa and immigration policies change often, so it’s best to contact the respective embassy to confirm if these privileges still apply. Also, this post is for Philippine passport holders who plan to visit as tourists only.

When we were invited to speak at the World Tourism Forum in Istanbul in early 2016, our excitement quickly morphed into worry when we realized Filipinos are required to get a visa to enter Turkey. It wouldn’t have been a problem any other day, but we were traveling abroad and we didn’t have more time to apply for one. But a quick online search revealed that e-Visas were available for Filipinos with a valid multiple-entry Japan visa. It saved us. The application took only minutes.

Sadly, Turkey no longer accepts Japan visa as a supporting document. (They limited it to US, UK, Schengen, and Ireland visas.) But it opened our eyes that this whole visa game is more complicated than we previously thought. Some countries are easier to visit if you have existing visas from other countries. For example, having a US visa on your Philippine passport will allow you to access many other countries. And that’s good news for Filipino travelers given that the Philippine passport isn’t all that powerful. At the school of passport privileges, the Philippines doesn’t sit at the table where popular kids like Germany, Singapore, South Korea or the US have their lunch.

Japan is a dream destination for many Filipinos. Over the past few years, visa policies have been relaxed and more forgiving, allowing many to visit Japan easily. But your Japan visa is more powerful than you think! It comes with many other perks. With a valid Japan visa, your Philippine passport will get a bit more edge.

Here are some countries that you can visit much more easily with a Japan visa! 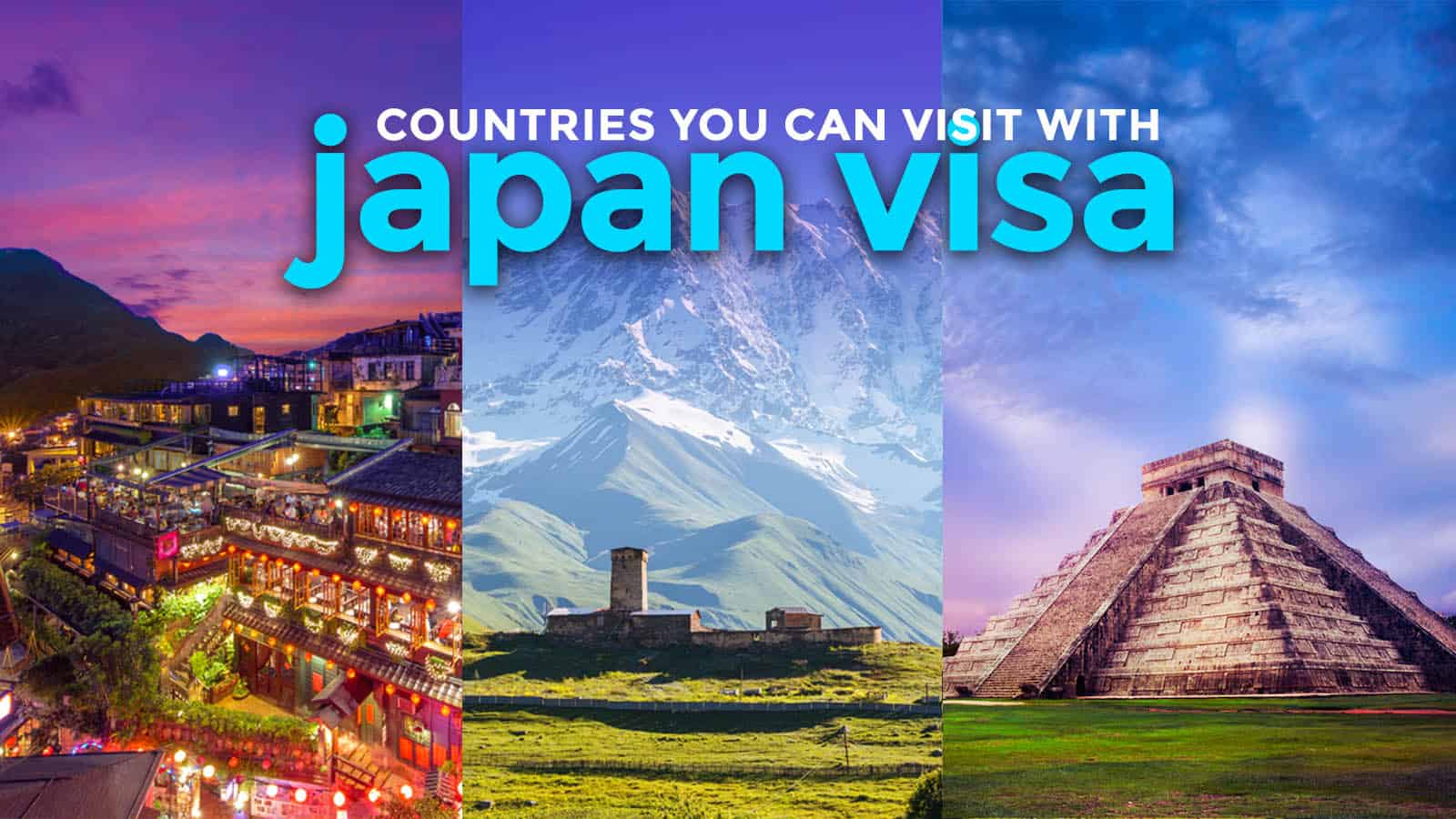 I discovered this on my recent trip to Europe’s Balkan region. My Schengen visa wasn’t multiple entry, which narrowed down the countries that I could visit in the area. But then I found out that Montenegro grants entry to travelers of certain nationalities, including Filipinos, provided that they have a valid multiple entry Japan visa! 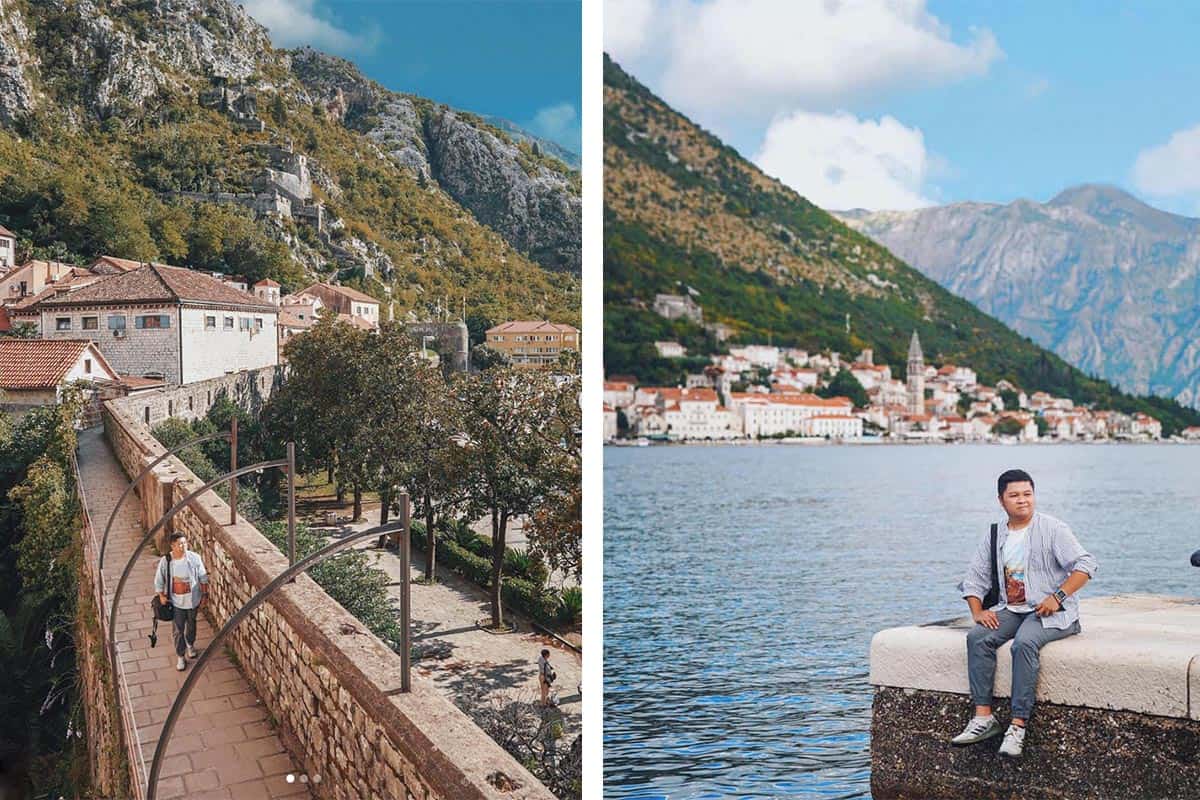 I emailed their Ministry of Foreign Affairs to confirm and they replied with this:

According to the Article 7 of the Decree on Visa Regime, holders of valid foreign travel documents containing a valid Schengen visa, a valid visa of Commonwealth of Australia, the Republic of Bulgaria, the Republic of Croatia, Japan, Canada, New Zealand, the Republic of Ireland, Romania, the United States of America and the United Kingdom of Great Britain and Northern Ireland may enter, pass through the territory and stay in Montenegro up to 30 days, and not longer than the expiry of visa if the period of validity of the visa is less than 30 days.

A few days later, I was in Montenegro! I visited Kotor and Perast and they were so beautiful!

If you have a valid multiple-entry Japan visa on your Philippine passport, you don’t need to apply for a Mexico visa for stays shorter than 180 days. I learned about this because we get invited to a lot of press trips to Mexico at the last minute and we kept on declining thinking we would need to apply for a Mexico visa, which can take days. BUT when we finally took the time to research, we found out that we didn’t actually need one if we have a valid Japan visa.

According to the Mexican Embassy:

With the purpose of facilitating and promoting travel to Mexico, effective May 2016 all those foreign nationals, regardless of their nationality, visiting Mexico for tourism, business or transit are NOT required to obtain a Mexican visa IF they hold a valid (non-expired) Visa or Permanent Residence of any of this countries: United States of America, Canada, Japan, United Kingdom or Schengen area (European Union).

Ting ting ting! Japan is there! But this seems to good to be true so I emailed the Embassy of Mexico in Manila to be absolutely sure! Here’s what they said. 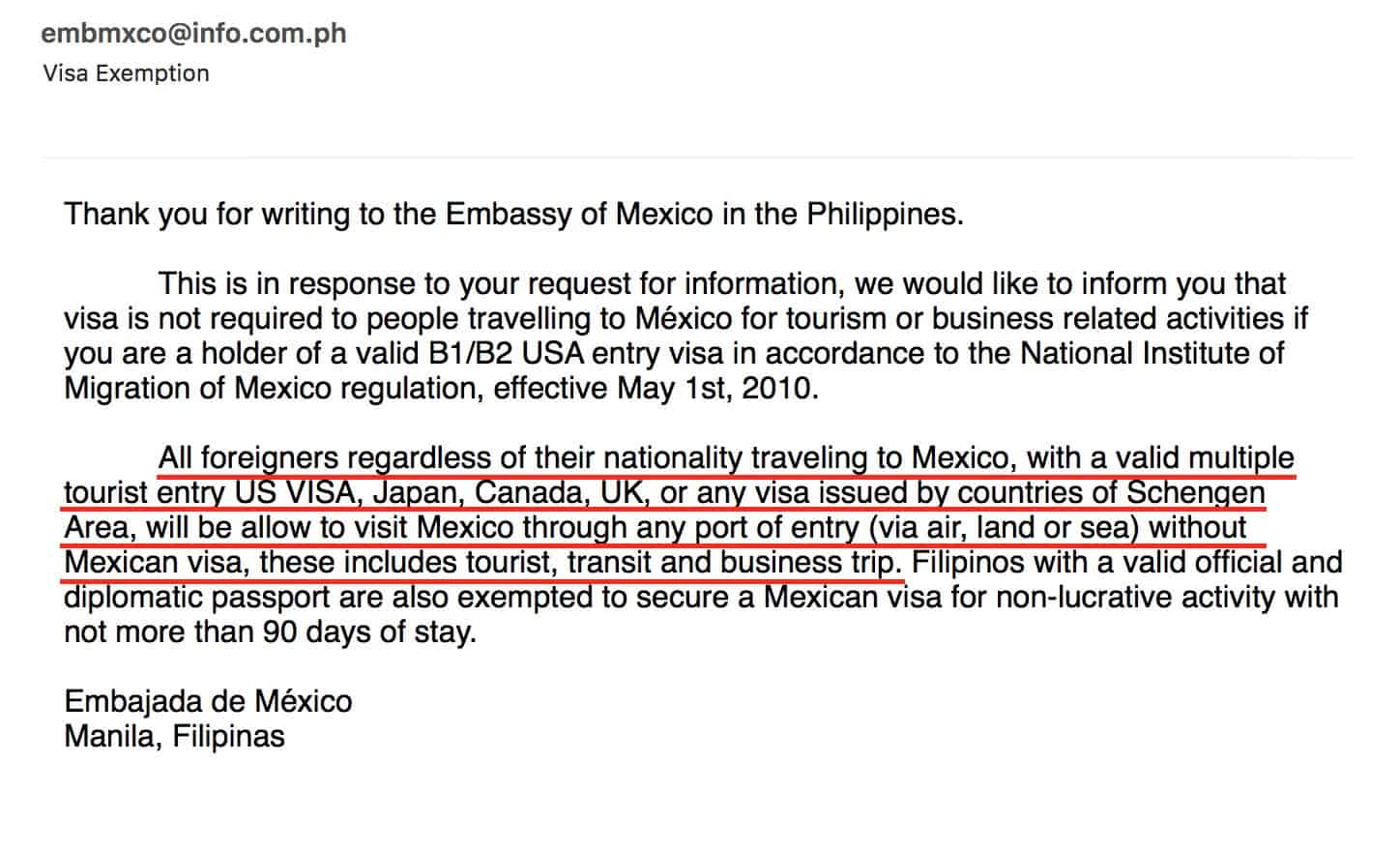 So yep, it’s confirmed. You can enter Mexico for tourism with a Japan visa.

Normally, a visa can be obtained online using Georgia’s E-Visa Service website. But recently, they have allowed Filipino citizens to enter the country if their passport has a valid visa from any of the member states of the Organisation for Economic Co-operation and Development (OECD), which include (among others) the US, the UK, Australia, South Korea, and (wait for it) Japan!

I tested it by making a faux application at Georgia’s E-Visa site and here’s what it said when I entered my Japan visa as a supporting document: 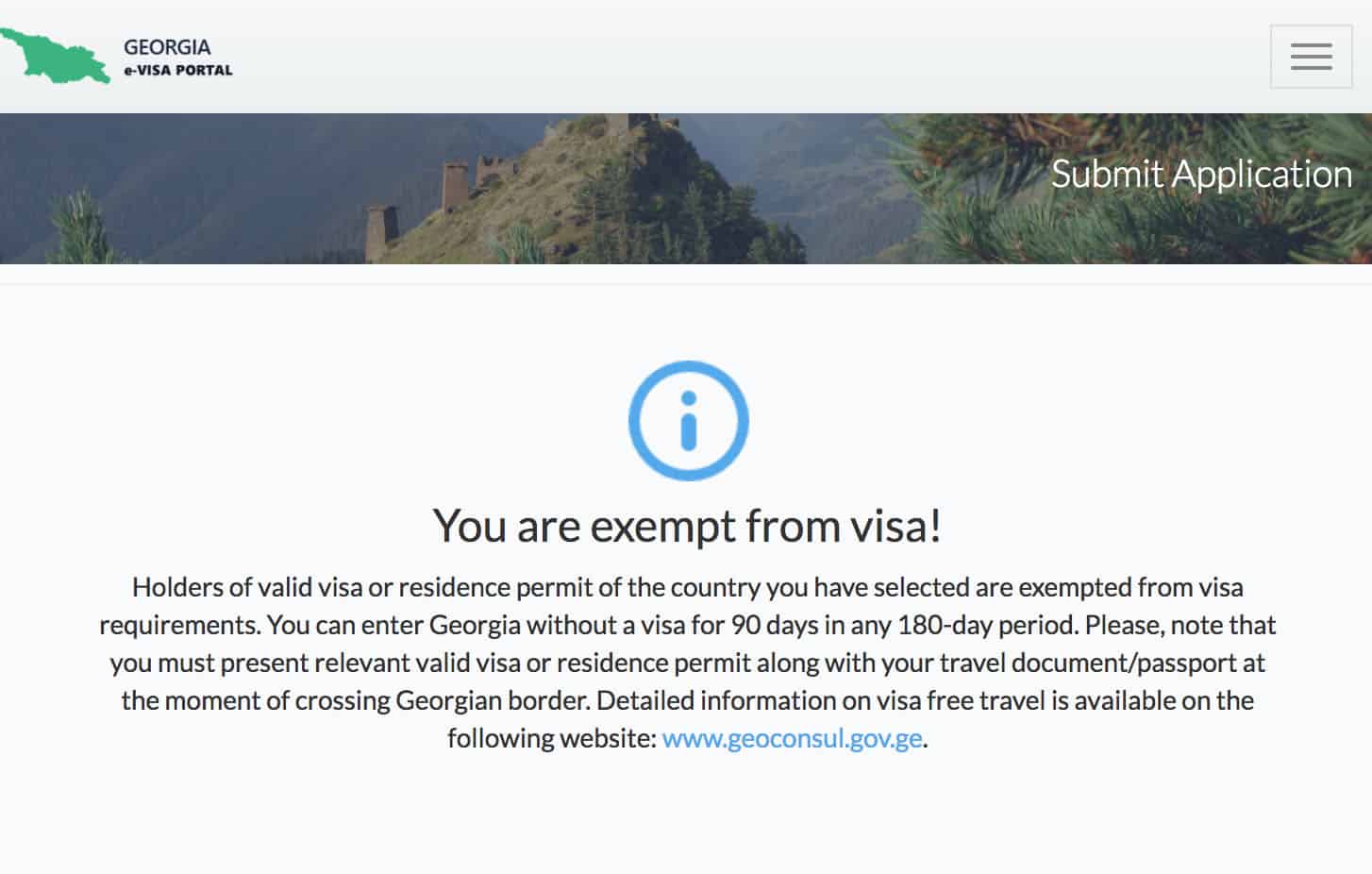 In case the text is too small for mobile readers, here’s what it says: Holders of valid visa or residence permit of the (Philippines) are exempted from visa requirements. You can enter Georgia without a visa for 90 days in any 180-day period. Please note that you must present relevant valid visa or residence permit along with your travel document/passport at the moment of crossing Georgian border.

Turkey is one of them countries too…

So how can I get my Japan visa

Hi, what if my visa from an OECD country was from, say 2010. Is that still valid as supporting document given it has been expired for years? Haha thanks!

This is just soo pathetic. Your PASSPORT IS SUPPOSED TO BE YOUR STANDING IN THE GLOBAL STAGE. as we can all see, THE RP Passport is of the LOWLY KIND. that we need a visa from another country to bolster it’s use.

What’s more pathetic is your grammar. Get an education!

hi no additional requirements going to mexico? only the japan visa and good to go? thank you..

Hi, im here in Europe now as tourist and I thought of visiting a friend in Romania for a few days. I don’t have Romanina tourist visa but I have multipe Schengen visa valid until Jan 30, 2019. I am allowed to stay here for 1 month. I just arrived yesterday in Amstersam. Will my current Schengen visa enough to enter Romania? Thanks in advance.

Hi Panila, never been to Romania, but as far as I know, yes, you can enter Romania using a multiple entry Schengen visa. It’s also best practice to have proof of return or onward journey, just in case you’re questioned at the Immigration.

Hi!
Thank you for this information. I have been to Taiwan last year, April 2018. Will it be accepted as a supporting document for a planned trip after July 31, 2019? Moreover, I have a single-entry Japan Visa which I got also last year on October 2018. Will I need only the Travel Authorization Certificate? If so, when should I apply for it? My planned trip to Taiwan will be on August 5-9.

Thank you in advance.

Unfortunately, I don’t know yet what the rules will be after July 31. They haven’t made any announcement yet, afik. Best to call MOFA/TECO to be sure.

Hi,
If I’m already in Fukuoka and I plan to cross Busan via ferry. Should I still get SK visa?
Or my Japan Visa would suffice since I also plan to exit Fukuoka?

As far as I know, you would still need an SK visa.

hi….i have been to japan twice and considering of applying for sk visa…will it be easier for me to get the said visa?

Applicants with Japan visa will still have to complete all the requirements (including ITR) unlike before, but I think nagmamatter pa rin naman na may Japan visa ka kasi it proves your travel history.

Hi Guys. Thank you for your very informative travel blog. I have a valid multiple entry Japan visa but it is on my old passport. When I travel to Japan, I bring it along with my new passport for entry which is ok. Will a valid Japan visa in an expired passport (ofc will also bring my new valid passport) is ok for Montenegro? Thank you.

I asked them about this and the staff said that both the visa AND the passport have to be valid.

Hi Yoshke. I was able to receive a reply via email from the Consulate of Montenegro in the Philippines. They are the ones processing the Montenegrin visa applications of Filipinos and submit those to the Embassy of Montenegro to the People’s Republic of China. They are also the ones receiving the applications directly from applicants.

****
This was my email:
Dear Honorable Consul,

I am a Philippine citizen with Filipino passport planning to visit Montenegro in the future after the pandemic eases out and when international borders open.

Will it be ok to travel to Montenegro if I bring two passports:
(1) old passport with valid Japan multiple entry visa; and
(2) new valid passport

Will this be considered and honored?

Thank you very much.

Greeting from the Consulate of Montenegro in the Philippines!

We are glad to inform you that we can accept now the application form/s and document/s to process the Montenegrin visa here in the Philippines to be submitted to the Embassy of Montenegro to the People’s Republic of China.

If you do not hold any of the above-mentioned visas, you’ll need to apply for a Montenegrin visa.

Yes you may bring two passport ( old and new).

It is ok for Montenegro to bring two passports: (1) the old passport with the valid multiple entry Japan visa; and (2) the new valid passport?

Hi Yoshke, it is me again. It isn’t like how Japan and US handle valid visas? That as long as the visa is valid on the old passport (because sometimes, the validity of the visa exceeds that of the passport), you can travel to Japan or US with the valid visa in the old passport and attach with it the new valid passport? In Montonegro, they mean BOTH the valid Japan visa and the passport to which it is pasted should be also valid? Thank you.

Here’s what their Visa Center wrote to me via email. I’m copy-pasting it:

“Regarding your question about Japan visa in old passport I am informing you that is possible to enter Montenegro only with a visa in a valid passport.”

So I’m assuming the visa has to be on a valid passport. I’m not sure also if there have been changes to this policy since the pandemic, so best to email them directly to be sure.

Hi Yoshke. Thank you for the reply. By that you mean the valid multiple entry Japan visa SHOULD BE IN the valid passport, yes?