Since my sister moved to Hiroshima, I have been exploring more of Japan’s southern regions. Over the past 10 months alone, I have been to this side of Japan four times.

Hiroshima has its own airport, but it largely serves domestic flights. Internationally, it is directly connected only to Beijing, Shanghai, Taipei, Hong Kong, Seoul (Incheon) and Singapore. Hence, a huge chunk of tourists visiting Hiroshima enter Japan via other gateways, often Kansai Airport in Osaka and Fukuoka Airport. Between the two, Fukuoka is much closer.

To get to Hiroshima from Fukuoka, you have two main options: by bus or by train. The bus costs lower but takes longer. The bullet train is faster but way more expensive.

If you’re coming from Fukuoka Airport, the first thing you should do is to make your way to Hakata Station (if you’re traveling by train) or Hakata Bus Terminal (if by bus). These two structures stand next to each other, so if you change your mind on your journey from the airport, it’s okay.

Fukuoka Airport is within Hakata, so it’s not too far. It only takes around 20 minutes. To get to Hakata Station or Hakata Bus Station, you have three options: by subway, by bus, or by taxi. Note, however, that the International Terminal doesn’t have its own subway station. You will have to take the free airport shuttle bus to the Domestic Terminal. Hence, we don’t recommend the subway at all. If you’re taking the bus anyway, you might as well just go directly to Hakata.

So now that the subway is out of the way, here’s how to get to Hakata by bus and by taxi.

If you’re traveling alone or a party of two, this the cheaper option. Don’t be intimidated by it because taking the bus is very simple. It’s comfortable too. And if you have big bags, there’s a lot of room for it onboard.

Don’t lose your ticket. On your way out of the bus, drop it into a ticket container next to the driver. From the bus stop, you will have to walk a little bit to Hakata Station.

If you’re a group of three or four, the taxi is a good choice too. A cab can accommodate up to four passengers.

Just tell the driver you’re going to HAKATA STATION or HAKATA BUS TERMINAL. If you choose the latter, you will be dropped off in front of the Hakata Station entrance closer to the bus terminal, which is housed in the next building.

The fare depends on traffic conditions. It can be higher. I once had to pay over ¥1600 for the same trip. 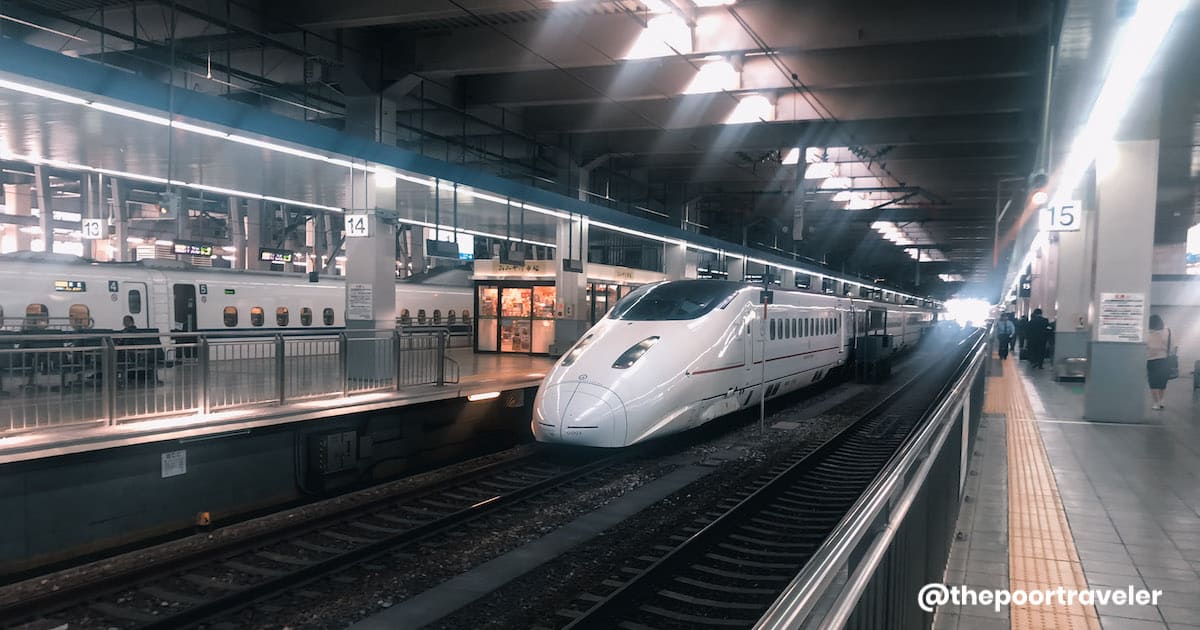 The shinkansen (bullet train) is the fastest option. It can take you to Hiroshima Station in only about an hour. The only problem, it is very pricey. I’ve taken this a few times only because I was trying to catch the last train to where my sister lives. Take away that consideration and I’d take the bus in a heartbeat.

You’re most likely going to ride the Shinkansen Mizuho, Nozomi or Sakura. JR Pass is not accepted for Nozomi and Mizuho trains but is accepted for Sakura trains.

On top of the fare, you also need to pay the SEAT FEE:

Normally, you don’t need to reserve seats. When I do this route by train, it’s always just me and two other people in the car. But if you’re traveling in peak season like Japan’s Golden Week, best to have a reserved seat. 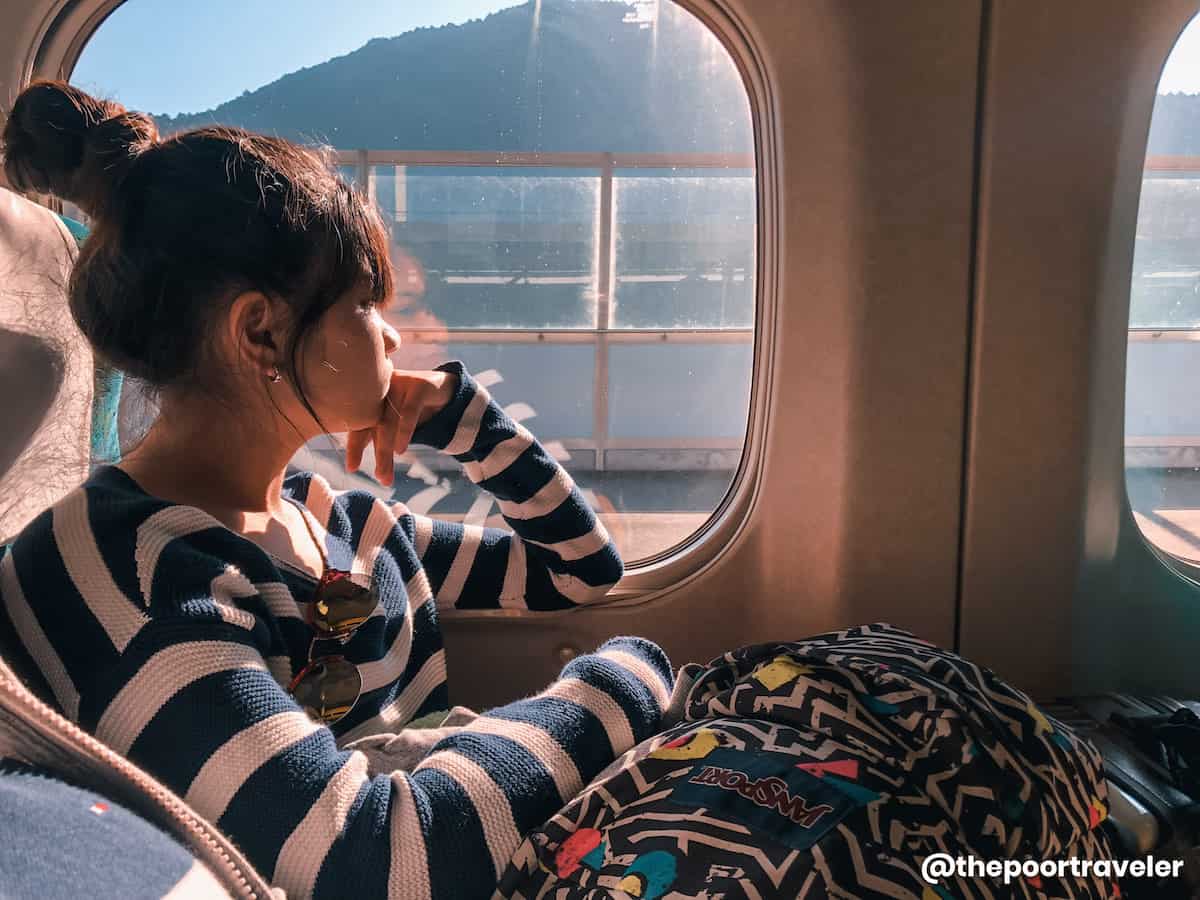 IMPORTANT! Make sure you board the right car of the train. There are UNRESERVED CARS and RESERVED CARS. If you’re caught occupying a reserved seat while carrying an unreserved ticket, you will be fined. The unreserved sections are usually towards one end of the train. Just check the signs on the floor and by the door of the car.

If you plan on exploring multiple destinations with Hiroshima Prefecture and Yamaguchi Prefecture and coming in via Fukuoka, consider the JR Hiroshima Yamaguchi Area Pass. This will enable you to get unlimited access to designated JR trains (including shinkansen) and bus lines within Hiroshima and Yamaguchi. This also covers shinkansen rides to and from Fukuoka (Hakata) and ferry ride to Miyajima.

If your trip is only 5 days, this is a good deal. The shinkansen ride from Hakata Station (Fukuoka) to Hiroshima alone is already over ¥8000, one way. But this pass costs only ¥11,000 and it gives you much more.

If you decide to go to Hiroshima by bus, you need to go to Hakata Bus Terminal, which is located just next to Hakata Station. Just follow the signs. There are plenty of ’em. Once inside the bus terminal building, here’s what you should do.

When purchasing tickets, you will be asked where exactly in Hiroshima you will be getting off. Now, there are two key bus stops there: Hiroshima Station and Hiroshima Bus Center. Unlike in Fukuoka, these stops are far apart, so you need to figure out early on which of the two is closer to your hotel or whatever your final destination is.

The bus journey from Fukuoka to Hiroshima is half-scenic, half-claustrophobic. You can get a glimpse of Kyushu and Chugoku regions when you’re not zooming through tunnels, and there are countless of them especially between Yamaguchi and Hiroshima.

There are also a couple of bathroom stops.

That’s half the price of a shinkansen ticket but takes over four times longer.

Is the price for the bus to hiroshima two way or just one way?

Would it be more practical to get this instead?
https://affiliate.klook.com/jump/activity/2769-5-day-jr-hiroshima-yamaguchi-area-jr-pass/?adid=37780&af_wid=4167

Yes, that’s a great pass for your itinerary, especially if you’re visiting other destinations in Hiroshima prefecture.

Question do you have any bus schedule for HAKATA BUS TERMINAL? because I might arrived past 8pm. Can I still get a bus ride from Hakata Bus Terminal staition to Hiroshima???

Hi Shiki, if I remember correctly, there are still buses until 10pm.

I just checked Chugoku JR Bus website and it says the last trip is at 10:35pm. Not sure how updated that website is, but that’s what’s posted there.

Hi, it was great reading your blogs. My parents and I will go to Fukuoka in February 2020,Im thinking to go to Hiroshima, is the JR Hiroshima Yamaguchi pass will also cover the bullet train from Hakata Station to Hiroshima? I am really confused with the JR pass.

if we avail of the JR HIROSHIMA YAMAGUCHI AREA PASS and use it to travel from fukuoka to hiroshima, do we stay at the unreserved seats?

Hi! Can this pass JR HIROSHIMA YAMAGUCHI AREA PASS get you back from hiroshima to hakata station? Thank you!

Yep, as long as within the 5 day validity period.

Please help. We are 6 people traveling from Tokyo and we want to visit Kyoto, Osaka, Hiroshima, and Fukuoka in 7 days. What is the best and budget friendly form(s) of travel? We are open to all modes of transportation.

Hi Jack, given your route, it would be best to get a JR Pass and use their bullet trains.

Does the bus stop somewhere else before Hiroshima where we could get off?
Thanks for your very informative site.
PS I see that it is the rainy season in Japan. Do you think it rains less in Kyushu or Shimane/Yamaguchi?
Thank you.

Hi Sally, in our experience, there were multiple stops but they were all at various bus stops in Fukuoka and Hiroshima. Other than a quick stopover (for restroom, snack), there were no other stops in between the two cities.

hi, i really need more info esp about transport from Hiroshima to Fukuoka. hope you can share it soon. thank u

You can catch a train from Hiroshima Station to Hakata Station. Just check Hyperdia for the schedule and fare.

If bus, you can catch one at Hiroshima Bus Center. I don’t have the timetable though.

Hi ! I am an exchange student and I plan to visit Tokyo, Osaka, Kyoto, Kobe, Hiroshima and go back to Beppu where I live in 18 days but I am not eligible for the JR Pass.. do you know any other bus/train pass available for me, considered as a resident ?
Thanks for your advice !

Can you use this pass to get to stations in between Hakata and Kokura? Specifically to Fukuma sta. on the JR Kagoshima line to Mojiko.