Of all the places the Poor Traveler and his poor friend visited in Iloilo, I think it was at Biscocho Haus that we stayed the longest (other than our hotel room of course).

I tried one mango butterscotch and the next thing I knew I was holding eight more big packs lining up at the counter! It’s that yummy. Of course I didn’t forget to buy some piaya and biscocho.

Biscocho Haus has been serving Ilonggo delicacies for almost 30 years now, starting in 1975. It was a business built by Dr. Carlos Guadarrama and Mrs. Therese Guadarrama.

Biscocho has been the Ilonggos’ favorite snack and it was the store’s specialty. Because the demand for it grew, Biscocho Haus began becoming a name associated with heavenly biscuits. Soon, other products were offered and Biscocho Haus became synonymous with Ilonggo delicacies. 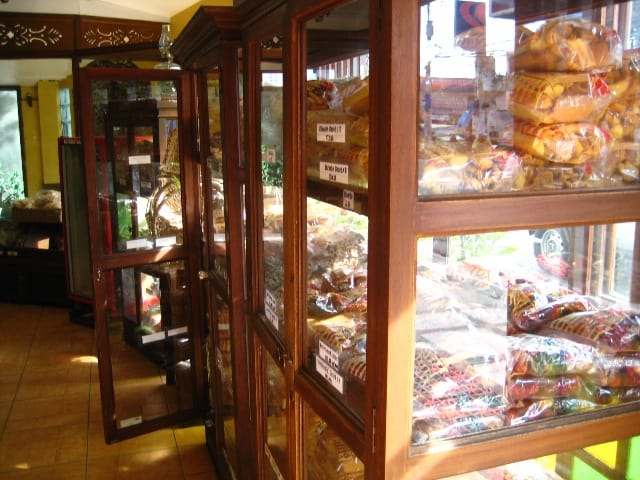 In 1894, Jaro was blessed to harbor a branch. Many other branches followed and now you can find Biscocho Haus products in other Panay provinces like Capiz, Aklan and Antique, and even in Cebu.

I LOVE THEIR BUTTERSCOTCH!!! THE BEST!!!

I been there. I love the waterfalls and the view sa gilid ng kalsada

I really miss you dear biscocho and butterscotch too…

all australian coming back to australia don’t bring biscocho…it will end up into garbage bin…it happened to me..

I love it! And I miss Biscocho, i was there way back 2001 for a Career in Sales and Marketing and I super love it..I miss the place..I think it’s near Jaro, before we live in Jalandoni and everyday nadadaanan ko yung Biscocho Haus our office is at the back of Atrium Bldg… Miss Guimaras Island too I been there once sa may Jordan ata yun…Di ko kabalo mag Ilonggo pero nami ang food jan…regards sa lahat…