The Poor Traveler and his poor friends began the Day 2 of our Ilocos Road Trip at around 6am. The first stop for the day was the Cape Bojeador Lighthouse in Burgos, Ilocos Norte. To be honest, before that moment, none of us had heard of this destination before. But I’m telling you, of all the places we have visited on this trip, Cape Bojeador Lighthouse was my favorite.

We drove 35 kilometers from Laoag City and reached a narrow two-lane road. We passed Brgy. Paayas and turned onto a winding road, leading us to the lighthouse’s base.

We stopped at the small parking lot and climbed a flight of stairs. Even from here, we could already see the restless South China Sea. (The waves were gigantic, we could see them from there.) We entered the courtyard and started camwhoring away. There are a few service buildings in the courtyard and lots of staircases. I’m not really a fan of lighthouses but there was something in this place that was just attractive. It was very peaceful up there and it was very cinematic. It’s the kind of location that would be a perfect setting for a romantic film.

It was very, very windy. And looking up, you could see the tower as if it was moving and falling down on you. (In reality, the clouds in the background were moving and gave us an illusion that the tower was falling.) 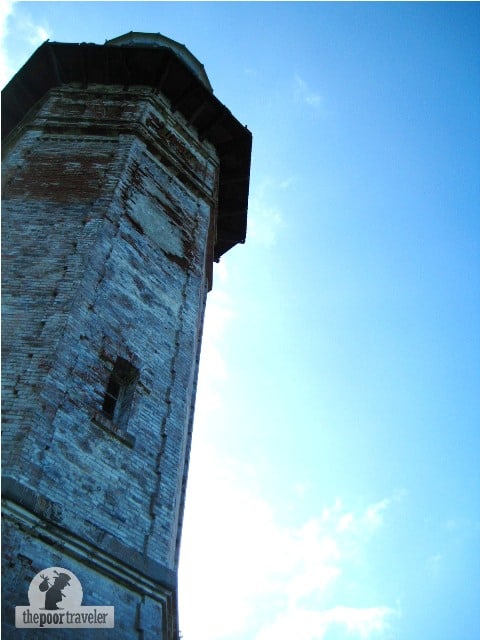 And oh, it was COLD. Good thing we brought jackets. We were covered.

We continued climbing up every flight of stairs we saw and reached the veranda. It gave us a more fascinating view of the South China Sea. We spent most of our time at the veranda because we were waiting for our turn to climb up to the lantern room on top of the structure. The place was small and could only accommodate around 10 visitors at once. 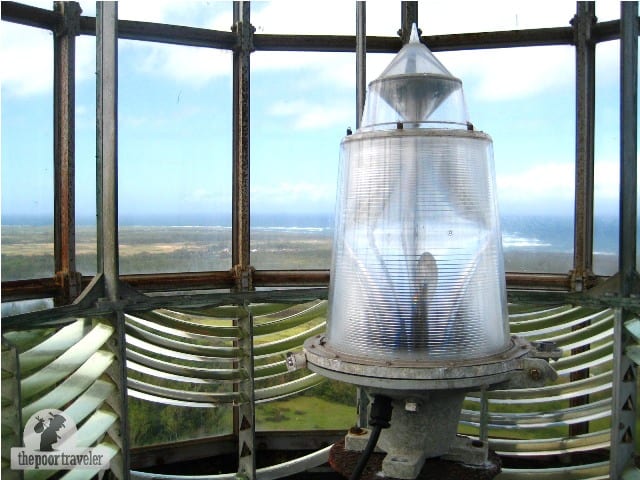 When it was finally our turn, we started climbing this old ladder which would lead us to the lantern room. It was a little bit scary. When we reached the lantern room, we were dead. IT. WAS. BREATHTAKING. AMAZING. GORGEOUS. BEAUTIFUL. ALL THE PRETTY ADJECTIVES YOU COULD COME UP WITH, YOU’D SAY ‘EM ALL.

It was absolutely my favorite part of the trip.

Also known as Burgos Lighthouse because it is located in the town of Burgos, the Cape Bojeador Lighthouse is a cultural heritage structure in Ilocos Norte. It stands on top of Vigia de Nagparitan Hill, overlooking Cape Bojeador. The cape used to be very busy as galleons used to pass by. It’s been more than 100 years since it was established and it is still fully functional — a beacon signaling to ships that they have entered the Philippine territory.

The lighthouse was erected as part of Spain’s master plan of illuminating the Philippines. The initial design was by Magin Pers and Pers in 1887 but was completed by Guillermo Brockman’s Lighthouse Service. The lighthouse tower is 65 feet tall and is octagonal. It is made with bricks to crowned with a bronze cupola.  On March 30, 1892, it was lit for the first time. The Philippines was under the Spanish rule at the time.

This is a part of the Ilocos tour we availed of for only P3,300 per person. For more posts about the other places we have visited, check out our ILOCOS ROAD TRIP collection.

Did the Ilocos trip just recently, and have some very nice pics from the Bojeador lighthouse. The trip was long and far, but worth it!

still fully functional? i don’t think so…been there and it’s not functioning at all…our tour guide told us it was damaged by a lightning years ago…but it was a beautiful spot, i love it! =)

We will be having our Ilocandia Tour on May 20 – 23. Excited. Reading your blog about the places made me very excited na. I, too has a blog site of places I’ve visited. Thank you for making this site. It is very informative.

Me and my fiancee been there last year, beautiful.. and also the view when your at the top of the light house!! :)

Been there 2wiks ago and the lighthouse is closed…hnd tuloy kmi nka pasok s loob,pinasarado ng phil.coast guard… :(

we were there last year, june 2010. the view of the south china sea from the lighthouse is breathtaking.

great view of south china sea when u reach the top of this lighthouse ..so relaxing … :-)

I signed at the guest book years ago! Still remember the great view!:)

This one here is amazing,also go to MANAOAG,VIGAN,WINDMILLS,& PAGUDPUD…. plus long hours of road trip…. wow:)

very helpful info, me and my friends were planning a roadtrip this coming january from cebu to ilocos, thanks to you!

I missed this when I was in Ilocos.. I couldn’t squeeze it in my itinerary..

I really enjoyed the place..Ilocos is the best!

why did I not take a picture of the lighthouse when I was there last week, it just means I need to go back.

i went there last year.. and it was great to see that lighthouse.. of course with my friendsin ilocos..

been there and had a creepy experience…but i still wanna go back there! love the sceneries!

pride of ilocos norte….im native from this great province.

I want to go there, i love the nature scenes esp it’s our own Country. We have to be proud of it para madiskubre at puntahan ng mga turista.

Truly, Burgos lighthouse is one land mark that one should see if traveling up north. A picturesque site and with a panoramic view of the coast. DOT/Town should keep it shining as it has thru all the years.

..is mang celso the caretaker still there?…such a good guy to accommodate us there and somewhat gave us an overview of the lighthouse story in general!!!

I saw lots of vandalism. Pls do something about this. Paging the local tourism dept of ilocos!

[…] day started in visiting the Cape Bojeador Light House, it is used to be very busy due to the number of galleons who used to pass by, and up to this date […]