Our boatman said as-a-matter-of-factly that the name Borawan is a portmanteau, a blend of two words — Boracay and Palawan. The island was named so, he claimed, because it possesses white sand similar to that on Boracay and rock formations reminiscent of Palawan’s limestone cliffs. Sounds like a name and an explanation hacked within the confines of a meeting room in a marketing office, but we took it in the meantime. The question is, is the island worthy of its name?

Well, I’m not the right person to judge. Granted, its sand has nothing on the fine and fair grains of Boracay and its cliffs are easily dwarfed by the karst giants of the country’s last frontier, but it could be a great alternative to those who cannot afford to fly to the faraway islands.

Padre Burgos, the usual jump-off point, is just four to five hours from Manila. But Borawan is actually part of Pagbilao. It glazes just one side of Pagbilao Chica Island. Emphasis on chica, which differentiates it from the much, much more expansive Pagbilao Grande Island, where Puting Buhangin is tucked neatly.

A more believable explanation for its name, as local folk would tell you, is “bulawan,” Visayan for gold. And looking at the number of tourists, its shores might as well be golden.

The first thing that snatched my attention when we arrived on the island were the colorful tents on the shore. Apparently, it is a favorite camping place for overnighters. You can rent tents for P500. But I strongly recommend that you get a tent (or borrow one) before coming here to save bucks. You can get a tent good for 3 for around P1000 at DIY shops (Handyman, Ace Hardware). You will still end up paying P200 for pitching, but at least you could take home the tent and use it again on other trips.

The problem was that the shore was a bit narrow and the beach looked so crowded. It was the third week of May; people were still on a summer euphoria. 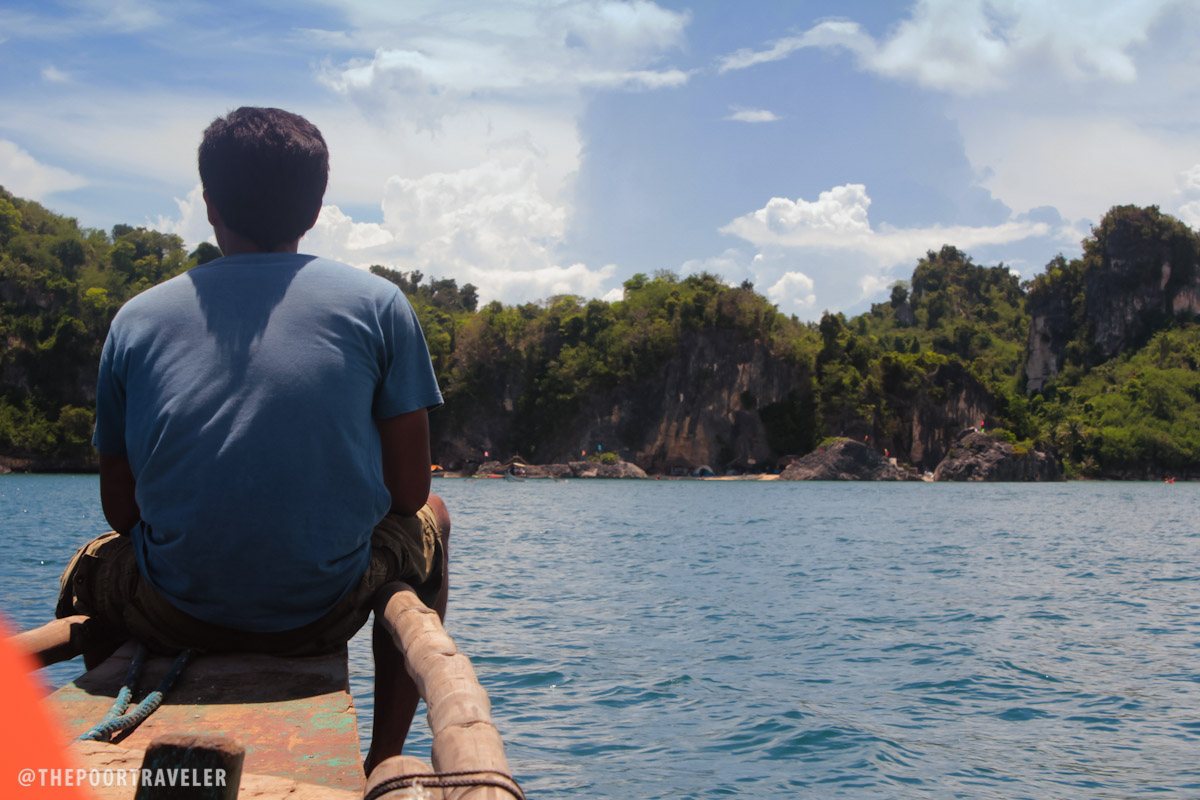 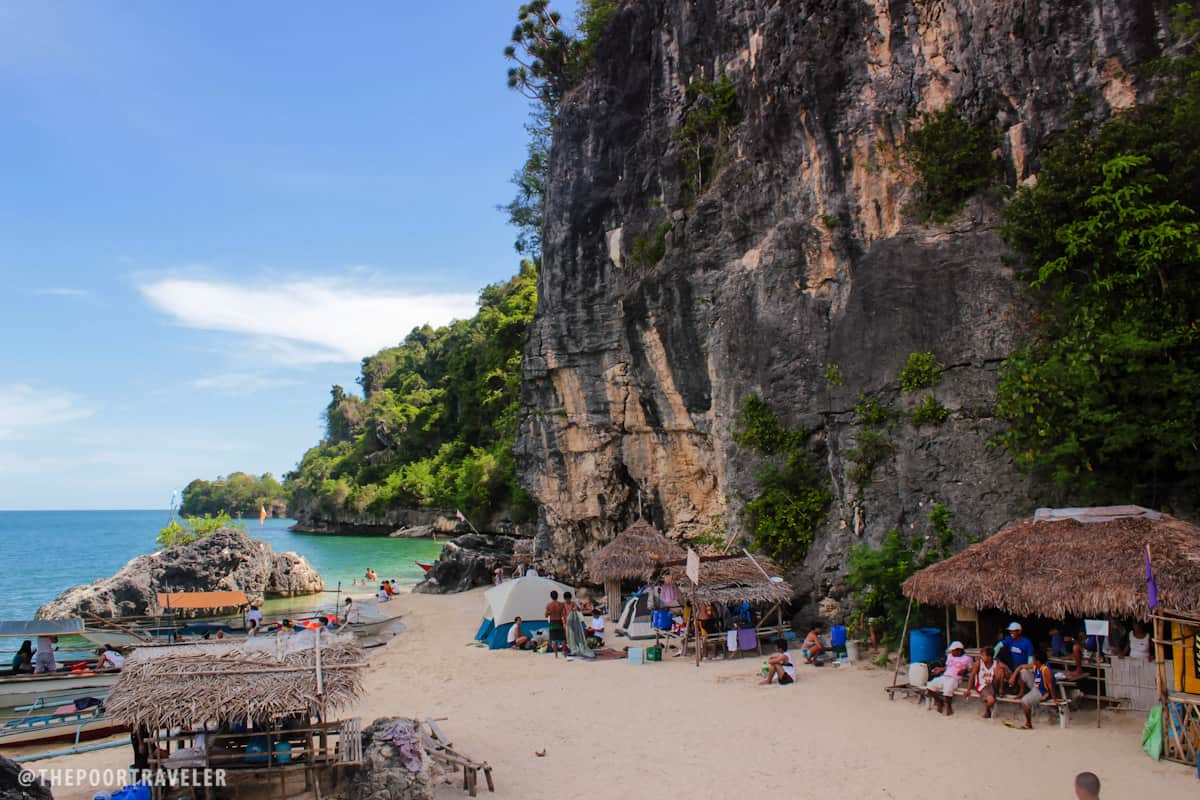 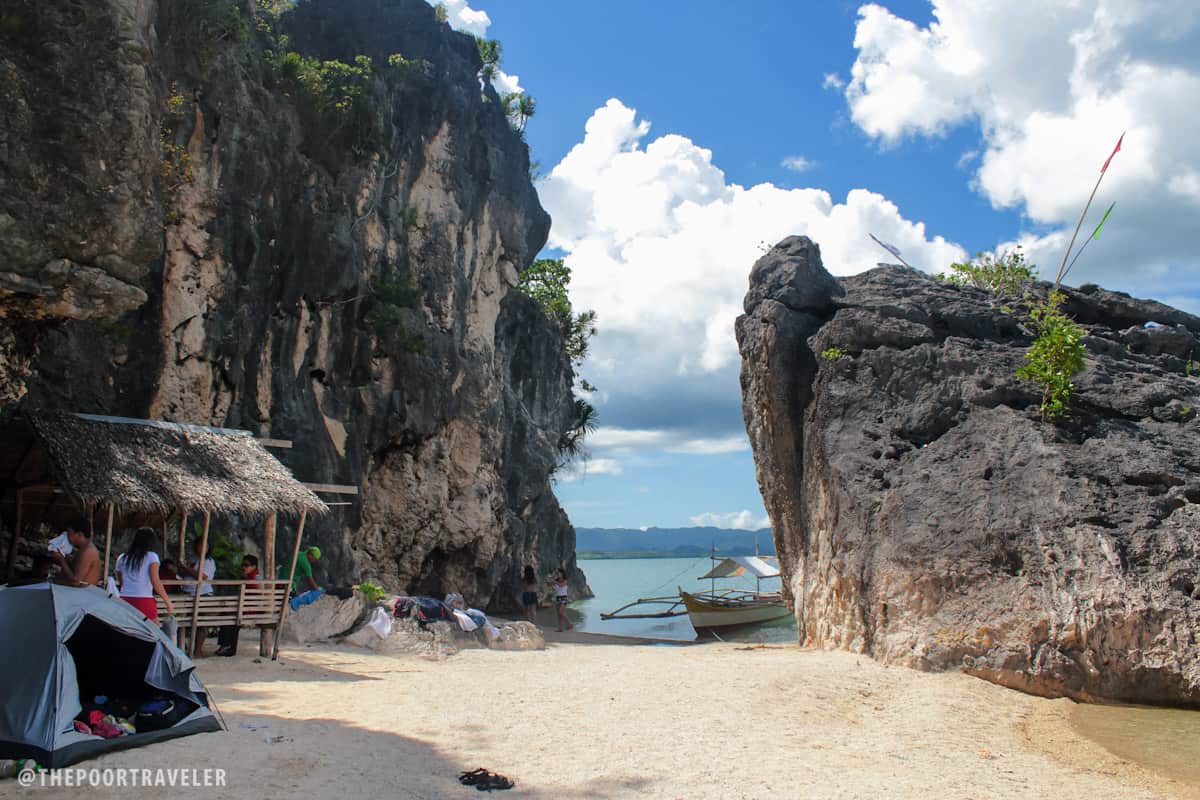 On one end of the beach were giant rocks that block the waves, making this part a favorite among non-swimming beach bums. The waters could get so still, lake-like, that they murky easily. Jellyfish also abound in certain parts of the water, warned some locals. But it doesn’t stop most people from taking a dip.

There’s a restroom made of bamboo in the area but that was the only restroom we saw along the beach. There was also a small store beside it. They were the only man-made structures we found along the coast.

How to Get to Borawan Island: From Manila by public transport.

It was so amazing seeing these kind of Island.. Actually our School planned to have a Tour there. We’re so exited about it. :)

The Poor Traveler
Reply to  krista

May i just ask how much wiLL be the boat rentaLs?
thanks much… :)

less thank 2K, ull pay less if ull go there in a group..

sobra gnda ng place but there are no amenities on the islands…just nature at its best!

Good place. Been in borawan last Christmas! Look at my photos. PM me i have the owner of vista playa resto numbr. :)

how much yung boat rental?

And the other thing….I luv your name….close to angel…lol…colors is sync with music….music to our soul and colors are to eyes and perception …art….make us relax and beauty is connected to our souls….and its Connected to serenity mother.nature and balance and contentment to blessings…..blessings and generosity is like a giant magnet…it creates positive energy of richness and abundance of things….

i thought borawan is owned by a anchorland already and is being developed into an island resort? are there still places to go there just to enjoy nature for free o kelangan na ng entrance fees to get to enjoy the island? =D

Grabe naman…why are the people being deprived of beautiful beaches kung may magmamay-ari ng mga beaches? FYI, beaches are for public use and cannot be owned by any individual. Maybe they can own the island but not the beaches as well sa the waters surrounding it.

sa amin ‘to… one of the beautiful places in Quezon Province. :)

superrr nice place to unwind together with family and friends. :)can’t wait to have a break to go there..

Been there, done that (plus more!)
cover photo says it all :)

we are going to visit Borawan this Lenten season, and hope we will enjoy the beauty of the island.

Thanks for featuring my hometown Padre Burgos, you definitely help our tourism industry.. I hope you guys visit us and for those who visited already, thank you and you are all welcome here to enjoy.

For more information about Padre Burgos (Borawan, Dampalitan and other places within it) please feel free to email me at ronjames_gonzales@yahoo.com or contact me @ 09178989750.

You have a beautiful hometown!!! :)

we will be there tom morning. see u borawan.contact person ate irma….package deal. at 900 pesos only food, boat rental and entrance all in…

I would like to know ate irma’s number.
We’re planning to go there tomorrow.

perfect place!!! we were there last holy week….. u can contact Ate irma for more affordable package at convenient stay……

how much is the package for 2 persons only?? planning to go tehre this coming end of november..
Thanks!

Hi this is to update that the contact of RON JAMES is 09496362087. We availed the package from him and it is worth paying. Thanks for your blog, it has been very helpful to us.

Thanks for sharing, Jaja!

How much did you pay for the trycicle?

borawan, dampalitan and puting buhangin boat rent and assistant for more info. and inquiries just call this number 09476142289 and seach for noime thnx.