We have three spirit animals: Pikachu, Totoro, and Jollibee. So when Jollibee challenged us to see a waterfall within a P1000 budget, we said, “You underestimate us, my friend. We’ll give you four waterfalls!” Challenge accepted.

We know exactly where to go: Laguna. Laguna is one of the places we often overlook partly because its edges aren’t laced with pearly beaches. Joke’s on us because paradise isn’t always made of sand and saltwater. Many of its historic towns retain many pieces of its glorious past. And its cuisine showcases some of the best in the Southern Tagalog region. Best of all, much of the province is almost untouched, still covered with dense rainforests concealing several magnificent waterfalls.

The towns of Luisiana and Cavinti are known for its spectacular cascades. Although Cavinti Falls has always been a tourism icon, it’s only recently that the town is getting attributed to it. For the longest time, it has been called Pagsanjan Falls primarily because the main jump off point to the site is located in the neighboring town of Pagsanjan. Cavinti, however, has established and promoted a trail to the waterfall that starts within its territory.

On the other hand, the town of Luisiana has been relatively obscure until Hulugan Falls was rediscovered and has since captivated weekend adventurers from Manila. But Hulugan isn’t alone. Nearby are two more cascades — Talay and Hidden Falls — both within a 30-minute rough trek of Hulugan. (There’s another one a bit farther, Aliw Falls.)

But to make our TINY BUDGET CHALLENGE more challenging, Jollibee sent us this checklist, which also includes a few tasks that would make the journey complete despite the limited budget. No problem. Off to Laguna we went. 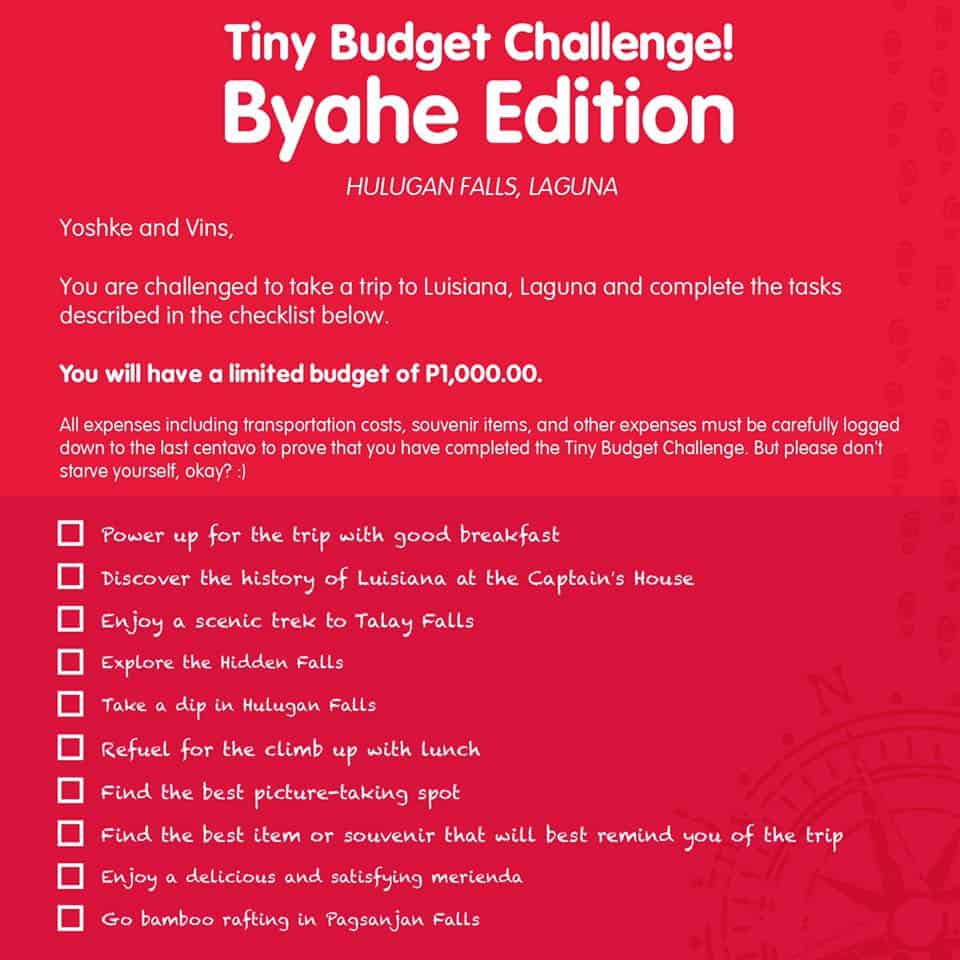 SAFETY PRECAUTION: If you’re going to do this trip on your own, be sure to bring your own bottle of water before the trip. It will involve a lot of trekking and the last thing you want to happen is to be dehydrated at a place that isn’t easily accessible.

Now that we have that out of the way, let’s see how we ticked off the items on the Bee list and how you can do it too!

1. Power up for the trip with good breakfast.

We began our journey at the JAC Liner Terminal in LRT-Buendia, where buses to Sta. Cruz departs almost every hour (Fare: P140). The ride takes around three hours, depending on the traffic. Hence, the earlier you leave, the better. Tell the conductor to drop you off at an intersection called Pagsawitan, where jeepneys to Luisiana are parked.

But before we headed to San Salvador (the barangay where Hulugan Falls was located), we needed to fuel up first. Thankfully, there is a Jollibee store near Pagsawitan. If you want a tasty but affordable breakfast, go for a JolliSavers meal. You can choose from the following: Burger Steak (P50), Jolly Spaghetti (P50), Jolly Hotdog (P50), and Regular Yum (30). I chose Spaghetti, while Vins had Burger Steak. 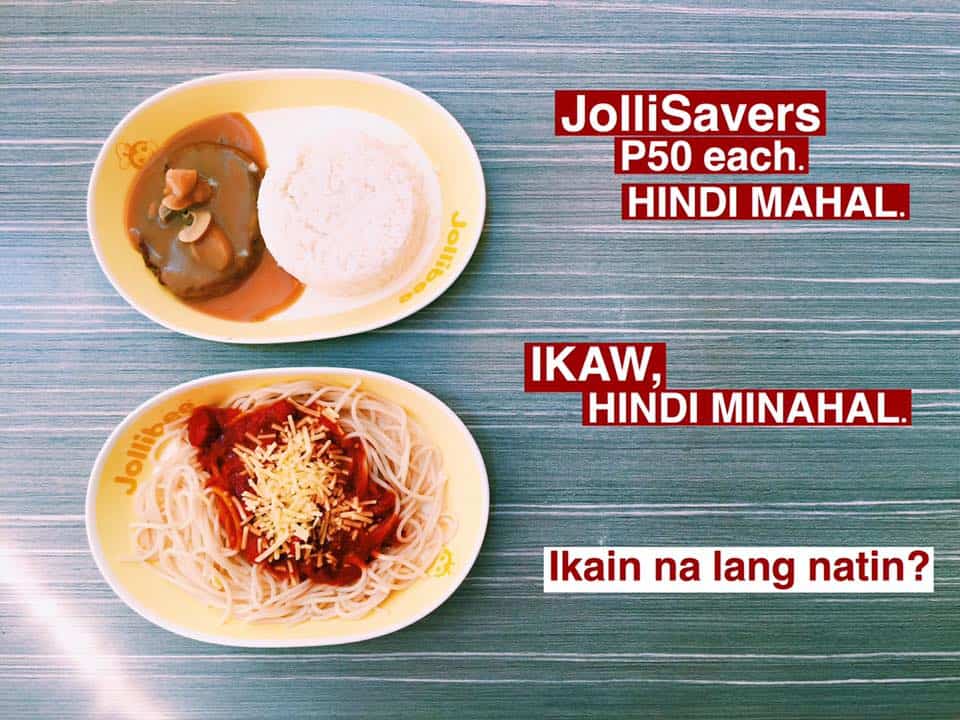 2. Discover the history of Luisiana at the Captain’s House.

After breakfast, walk to the terminal of jeepneys bound for Lucban and board one. tell the driver to drop you off in San Salvador, to be sure. Fare: P30. Travel time: 30 minutes.

An information desk is stationed at the start of the road that leads to Hulugan Falls. It’s operated by the barangay staff. Once here, you will be assigned a guide, who will usher you to a place called Bahay ni Kapitan. It is here where you will need to register and pay the P20 tourism fee.

There wasn’t any barangay staff to talk to about the history of Luisiana when we arrived, but our tricycle driver was more than willing to share history bits about the town. According to him, the town was founded by a man named Luis who was married to a woman named Ana. At first, I thought it was one of those legends that people have come up with to explain the origin of their town, but it turned out to be grounded in history. Luisiana is actually a combination of 3 words Luis y Ana, referring to Don Luis Bernardo and his wife Ana, who facilitated the foundation of the municipality, which was previously just part of a bigger town called Terreno de Nasonog.

After registration, a tricycle ride will take you to the start of the trail (P10). At this point, you need to tell your guide how many waterfalls you want to visit. You see, there are three waterfalls in San Salvador: Talay Falls, Hidden Falls, and Hulugan Falls. Hulugan Falls is by far the most beautiful, but the other two are worth a look too.

But here’s the thing: Each waterfall can be seen after a 30-minute hike on a rugged trail. If you’re slow and inexperienced (like us, LOL), it can take even longer especially if the path is muddy or slippery. Calculate and check if your schedule and energy level would allow visiting all three waterfalls. But my recommendation is this, if it rained the night before or earlier that day, skip the other two. I did this trek already before when the track was muddy and slippery and it was tough, to say the least. It can be pretty dangerous.

If the trail is dry and you think you have the stamina, go for it. There’d be a couple of times when you would need to cross the river and climb big rocks.

From Talay Falls, it’s going to be a steep climb to the next stop, Hidden Falls, so called because it’s tucked in by giant boulders. It’s much grander than the two-tiered Talay, but much smaller than Hulugan. You can also climb to the side of the waterfall to have a good view of the site.

Warning: On the way to and from the Hidden Falls, you’ll find gaps between the rocks that are filled with water and sometimes covered by fallen leaves. Although they look shallow, they are NOT at all. Do not step on them.

5. Take a dip at Hulugan Falls.

From the Hidden Falls, it’s a long way down to the main attraction, Hulugan Falls. This one is a showstopper, and the best thing about it is that you can actually swim to and get close and personal with the splashy column. Make sure you know how to swim. If not, you can always take a dip in the shallow parts or use a buoy attached to a rope provided on one end.

How much time to spen here is up to how much time you have left. Just remember this: it takes 30-40 minutes to climb up to where the trail started and Cavinti Falls stops accepting visitors at 3pm. Make sure you leave Hulugan Falls at 2pm if you want to see Cavinti Falls, too.

Because Hulugan Falls has emerged as a tourist attraction only recently, many of the practices here have not been standardized. For example, there are no set rates for the tour guide fee. Ask anyone in the area and they will tell you, “Kayo na po ang bahala.” Online sources say P600 is fair enough if you visit all three waterfalls and P300 if you visit just one.

Here’s the thing about Hulugan Falls: there are not many places to eat. I know they sometimes serve meals at the Bahay ni Kapitan and there is a bibingka store at the start of the trail, but they are not always open. The first time I was there (Sunday), they were open, but they were closed on my next visit (Friday).

It’s best to just bring food with you. This is important because the trek can be really exhausting. Since we had breakfast at Jollibee, we decided to have another JolliSavers meal for takeout. This time, I had a Jolly Hotdog while Vins had a Regular Yum, both of which Vins ate. If you’re gonna do the same, just please make sure you take the trash with you. Leave nothing but footprints.

From Hulugan Falls, you can hail a trike to Pueblo El Salvador, a jump off point to Cavinti Falls. It takes just 10-15 minutes. Fare: P100-P200 depending on your haggling skills, something that we had not mastered so we paid P200. But since there are four of us in the group, that’s only P50 per person.

When you reach Pueblo El Salvador, you will be given options on accessing the falls. The more popular way is by boating or shooting the rapids, which costs P600+ per person. But since we were on a budget, we settled with the tougher but cheaper option which is hiking and rappelling at P270 per person. This includes the fee for the bamboo raft if you want to go into the Devil’s Cave behind the water column.

The descent to the waterfall from Pueblo El Salvador lasts 30 minutes. (Going down is easy, but it was so difficult climbing back up, which will take much longer.)

The best photo spot? Directly below the waterfall, of course! While rafting to or from the cave, the raft actually lingers below the cascade, which is a perfect opportunity to have a unique and action-filled selfie!

9. Enjoy a delicious and satisfying merienda.

The whole time, we were loooking for a local delicacy for merienda around the two waterfall sites, but we just couldn’t find anything. Maybe our timing was bad (because we saw a few stores but they were all closed). We sort of just gave up on it and headed back to the bus station.

To get to the bus terminal from Pueblo El Salvador, take a tricycle to the highway (P20 each) and then ride a jeepney back to Pagsawitan (P25). Or again, you can tell the driver to drop you off at the terminal for buses to Manila. Bus fare is the same at P140.

I was starting to get hungry again but the bus was already moving. When it stopped to pick up more passengers, I secretly wished a food vendor would come in! Lo and behold, a BIBINGKA VENDOR boarded the bus. The bibingka smelled and tasted really good. It had the right sweetness and inside are coconut strips. I couldn’t believe that I would have the best bibingkas I had ever inside a bus and for only P20.

10. Find the best item or souvenir that will best remind you of the trip.

As always, we’re a firm believer that the best souvenirs are photos and videos. They are the perfect and most effective reminders of the good times we had along the way. And they are absolutely FREE. Below is the souvenir we got. Go give it a watch:

Accounting time! Here is a detailed breakdown of all our expenses throughout the trip.

WHEW! We almost didn’t make it!

You can still bring down the cost! If you’re a party of 3 or more, best to have your own ride. Not only will it be more comfortable, it will also be a lot cheaper. You will only have to pay for the gas (P500) and toll fee (P214, one-way). If for example, you’re a group of 4, the total transportation cost is only at P232 (P928/4pax), which will reduce the total cost for this trip to only P812.

It’s been a great fun doing this challenge with Jollibee!

I grew up in Cavinti till I was 9 b4 moving to Muntinlupa and I’ve never heard or seen those Falls except the more famous Pagsanjan Falls.
It’s time to pay a visit.