When we’re traveling abroad, our preferred way of getting cash is by withdrawing from an automated teller machine or ATM. It’s the fastest, easiest and most convenient option there is. One can also argue that it is also the safest. At the very least, safer than carrying around a big amount of cash or dealing with shady money changers.

But if you’re not careful, you can still lose a portion of your money without realizing it. And it’s getting more common these days! It’s called Dynamic Currency Conversion (DCC).

What is Dynamic Currency Conversion?

Some ATMs and credit card merchants will offer you what they call “Dynamic Currency Conversion (DCC)”. It’s sometimes called Cardholder Preferred Currency (CPC). Either way, don’t fall for it.

Often, ATMs will low-key urge you to pick your home currency by highlighting its so-called “advantages.” They will use words like GUARANTEED RATE or FIXED RATE to describe the home currency, and “UNKNOWN RATE” to describe the local currency. It’s tempting because it’s always comfortable to be billed in your home currency, the currency you’re very familiar with. If you’re from the Philippines, you’re most likely used to having all your transactions in peso. If you’re from the United States, you’re used to the dollar.

Sounds good, right? How generous of them to go the extra mile and convert for you, right? WRONG!

Why is DCC bad for you?

Because if you agree to be billed in your home currency, you’re letting them set a worse exchange rate. They also sometimes add a markup or foreign transaction admin fees. In short, you’ll be overcharged. You’ll be charged more.

In the example above, I took a photo of the rate that this DCC was offering me. I declined it. When I checked online how much was actually subtracted from my account WITHOUT DCC, I was glad to know that I was charged MUCH LESS than the DCC offer. If I accepted the DCC offer, I would have lost P1200 for withdrawing 2000 Croatian kuna.

Even if you add the 3-euro transaction fee for declining DCC, the rate is still significantly better WITHOUT DCC. Good thing I declined DCC.

This is annoyingly legal, but it sure feels like a scam!

It’s frustrating because it makes you think that they’re doing you a big favor. It also takes advantage of your cluelessness and discomfort. If it’s your first time withdrawing abroad, you’ll be intimidated by the thought of being charged in a foreign currency.

What should you do?

First of all, always make sure to check your bank’s foreign transaction rates before the trip. Who knows, maybe this whole DCC thing is better in some cases.

But in my experience, when I compare, for the same amount of foreign currency, choosing DCC always means paying a lot more vs when you withdraw without DCC. So as my personal rule of thumb, I always select the destination’s local currency.

Decline the dynamic conversion. Always choose to be billed in the destination’s local currency.

Sometimes, it’s a YES/NO question: “Would you like to be billed in your card’s home/domestic currency?” Choose NO or DECLINE.

Sometimes, they will try to make it look like DCC is more advantageous. It will show you the conversion rate and then ask you to choose between “Proceed with Unknown Rate” and “Proceed with the Guaranteed Rate.” Wow, “guaranteed.” It’s an attractive word. But no, decline it. Choose the UNKNOWN RATE. Don’t pick their “guaranteed” rate. It’s guaranteed to be bad! 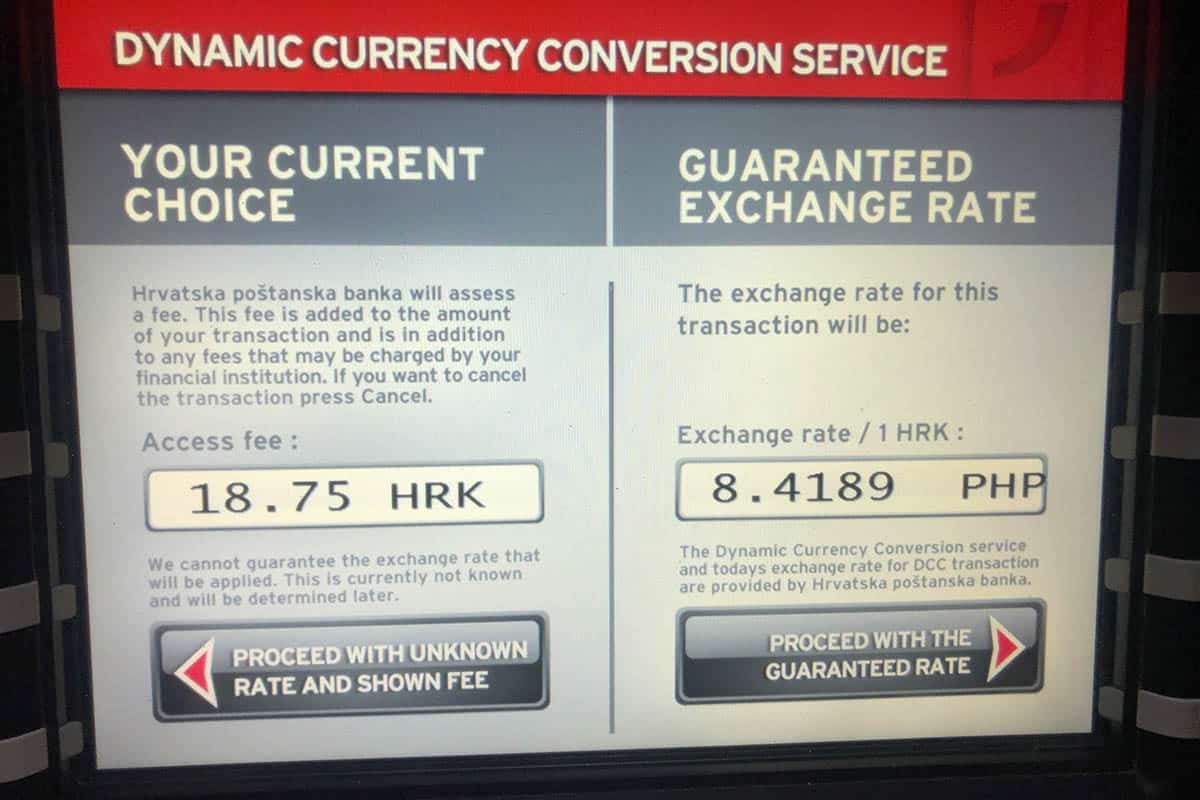 Sometimes, they will insist. After you decline, it is not done yet. It will ask you again: “If you don’t use our conversion, we cannot guarantee the exchange rate that will be applied. Are you sure you want to proceed without conversion?”

Yes, you’re sure. Decline the conversion.

Do credit cards have DCC, too?

YES. Sometimes, when you use your credit card abroad, you might be asked if you want to be billed in the local currency or the home currency.

In my experience, it’s better to choose the LOCAL CURRENCY.

Many thanks for your help and I know having traveled overseas myself.

aren’t our local banks doing the same thing when we use our ATM abroad? their currency conversion can use the same tactic of bloated fx and misc charges?

Hi, I’m just curious, I recently purchased bus tickets abroad using my credit card via internet. It charge using USD instead of PHP, my domestic currency. I was not asked whether to be charges in local or domestic currency instead. Does this mean that my credit card will automatically convert it to PHP or will I receive a confirmation from them first?

Without the DCC, the rates that PH banks use are not bad, but a fix transaction rate, usually 3-4 euro, applies. At least based on our experience.

We always try comparing when using ATMs abroad: how much we would be charged with DCC –VS— how much we were actually charged without it. The one without DCC always charged us less pesos for the same amount of foreign currency. The difference is also big.