As the capital of Ishikawa Prefecture, Kanazawa has a lot to offer travelers who seek off-the-beaten-path destinations. The teahouse districts breathe life to geisha arts. The samurai district offers a glimpse of the old castle town era. And the Kenrokuen Garden and Kanazawa Castle Park provide picturesque green spaces to locals and tourists seeking some respite.

Here are some of the best places to visit in this underrated corner of Japan.

Located at the center of city is the Kanazawa Castle Park. Its history dates back to the 1500s, when a religious school was founded. It was then turned into a castle ground by Oda Nobunaga, one of the three unifiers of Japan. Not long after, Kanazawa Castle became the seat of power of the Maeda Clan. During World War II, it was used as an army base. Before it was opened to the public, the castle park used to serve as the campus of Kanazawa University until its relocation in 1995. 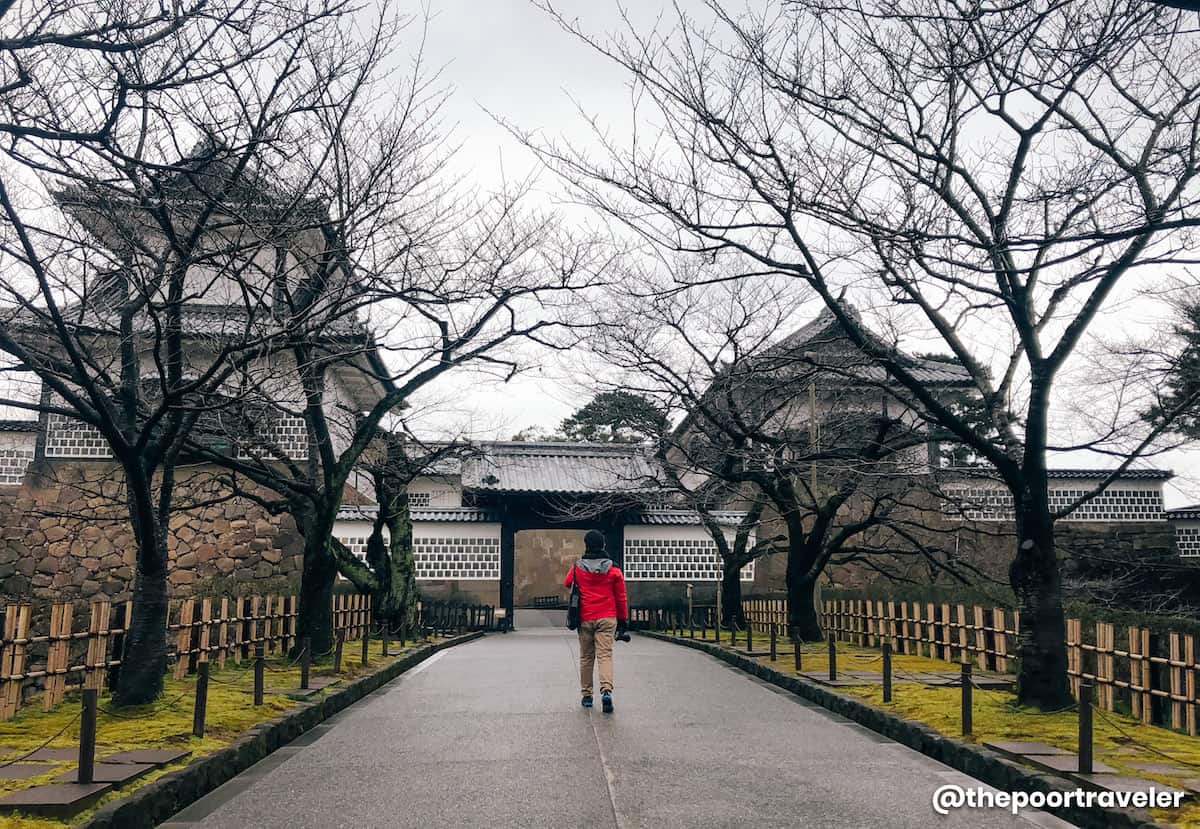 At present, the park serves as a historical and cultural heritage site. Some of the notable structures are the turrets Hishi-yagura and Hashizumemon tsuzuki-yagura, and the storehouse Gojikken-nagaya. These three are said to be the largest wooden structures in Japan after the Meiji Period. Other highlights are Kahokumon Gate, Ishikawamon Gate, and Sanjikken-nagaya. The last two are designated as National Important Cultural Property. The castle’s stone walls are equally important as they showcase the various masonry techniques throughout the centuries.

The Gyokusen-inmaru Garden is a well-landscaped and manicured piece of land built around a pond. Here, you can try the casual tea ceremony while enjoying the view of the garden. The tea ceremony includes a serving of matcha green tea and fresh traditional Japanese sweets (namagashi).

How to Get There: From JR Kanazawa Station, take the bus to Kenrokuen Garden Stop (15 minutes). You can reach the castle park in a minute on foot from the stop.

Originally part of the Kanazawa castle ground as the outer garden, it has withstood the test of time, being developed and improved by the ruling lords for over 180 years. Today, it is not only listed as one of the Three Great Gardens of Japan but also designated as a National Special Place of Scenic Beauty. Many visitors marvel at the scenery this extensive landscape garden offers. Its total area is about 11 hectares, housing around 160 species of plants and over 8,000 trees. 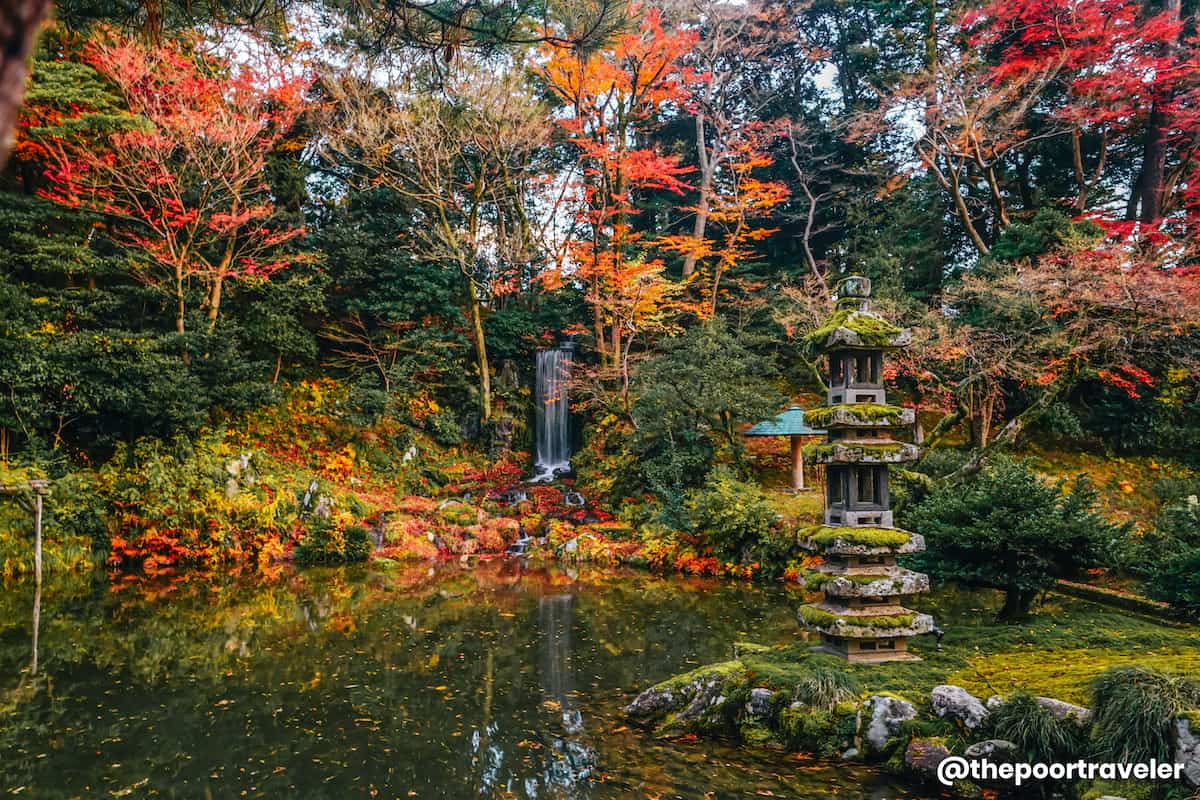 Some of the highlights inside the garden are the natural fountain, Kotojitoro Lantern, Yugaotei (the oldest building in the garden), Shigurutei Tea House, Hanamibashi Bridge, and the Karasakinomatsu Pine Tree. Kenrokuen Garden presents a different spectacle every turn of the season.

How to Get There: From JR Kanazawa Station, take the bus to Kenrokuen Garden Stop (15 minutes). You will reach the entrance in a minute on foot from the bus stop. 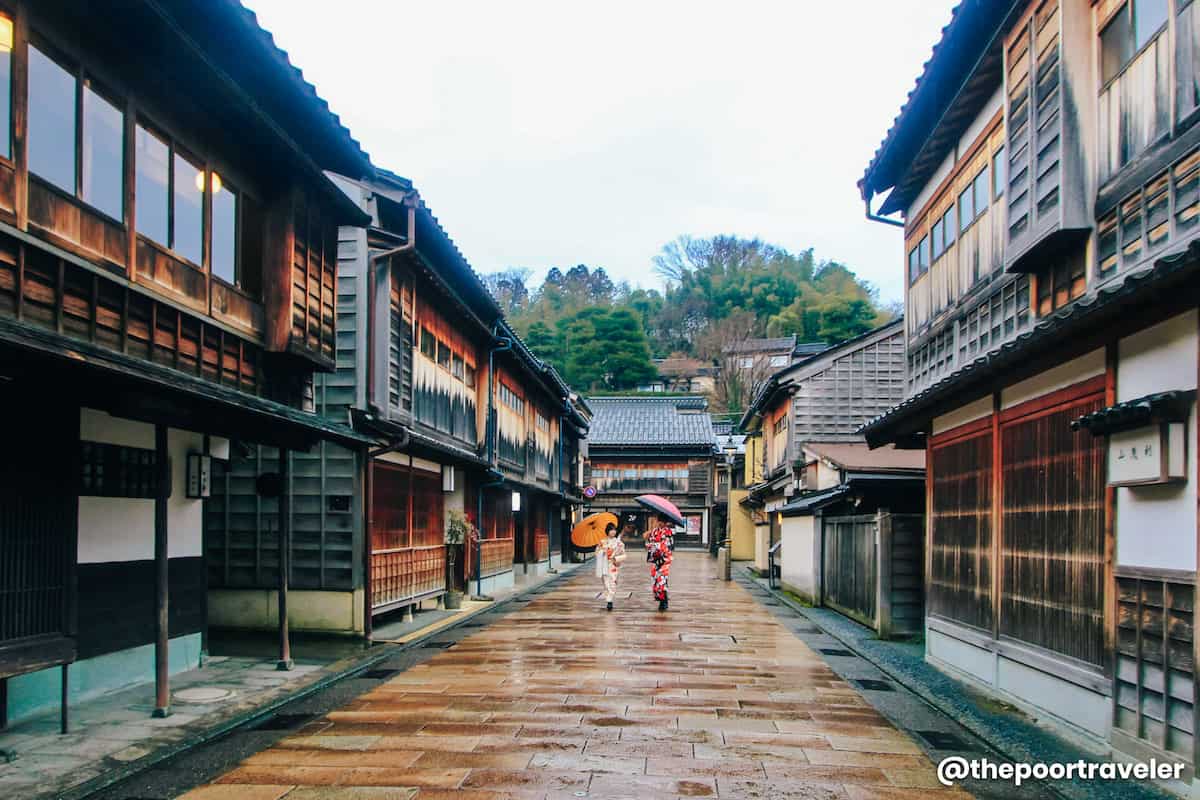 Be transported back in time as you stroll down the historic teahouse districts, which illustrate Kanazawa’s old feudal castle town era. Higashi (East) Chaya, Nishi (West) Chaya, and Kazue-machi Chaya are the three teahouse districts that used to mainly serve as entertainment districts where geishas thrive.

Higashi Chaya is the biggest and the most popular among local and foreign tourists alike. Some of the old traditional wooden houses are converted into souvenir shops, café, traditional Japanese sweet shops, and restaurants. Of course, don’t miss the chance to check out some of the teahouses. The two most popular ones are Shima Teahouse and Kaikaro Teahouse.

The other two, which are smaller, are less crowded and quieter. Unlike Higashi Chaya, most of the traditional geisha houses here, if not all, are not open to the public.

Kanazawa produces 99% of Japan’s gold leaf. The gold stuff you see sprinkled on food and drinks and those used for castles, shrines, and temples most probably came from Kanazawa.

One of the shops in Higashi Chaya that specialize in gold leaf production is Hakuza Hikarigura. You will see a variety of gold leaf products here — from food garnish to ceramics to decorations to jewelry. But the highlight is the Golden Storehouse (Ougon no Kura), a room that is totally covered in gold leaf! Another branch is Hakuza Honten in Moriyama. It features the Golden Tea Room (Ougon no Chashitsu). 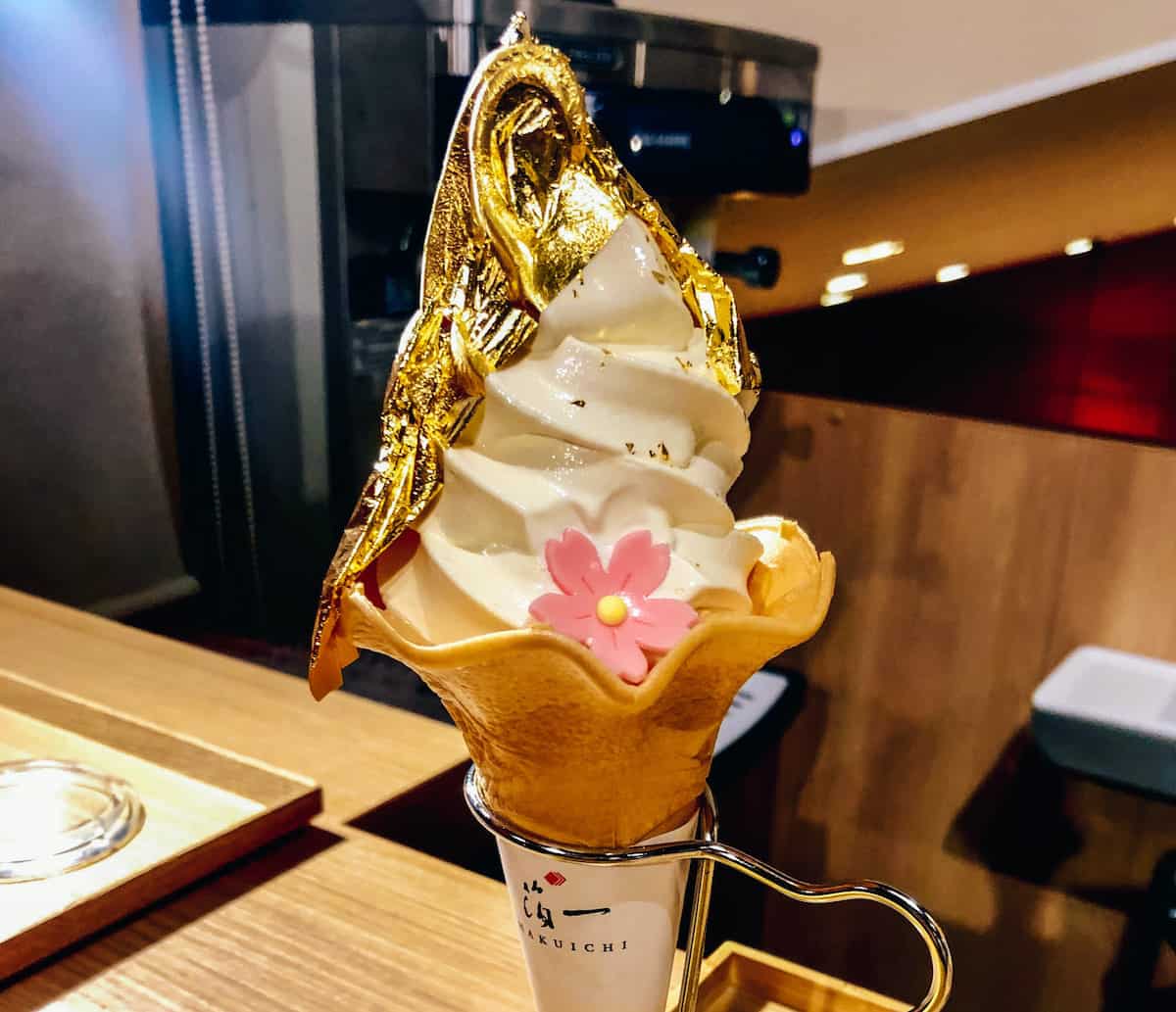 After strolling around the district, why not try Kanazawa’s famous gold leaf soft serve ice cream? The most famous shop serving this delicacy is Hakuichi, which literally means 891. The ice cream is covered with a thin sheet of gold leaf that is 100% edible. The pure gold is bioinert, so it will not harm your digestive system or your body. But if you are lactose-intolerant or allergic to dairy products, that’s another story. ;-P

Located near the Kanazawa Castle, Nagamachi is the district where the samurai of Kaga Domain’s Maeda Clan used to live with their families. The streets exude an atmosphere of the feudal era with the mud-walled samurai houses and irrigation canals lining them. Visit the restored samurai residence, Nomura House, Shinise Kinenkan Museum, and Ashigaru Shiryokan Museum.

How to Get There: From JR Kanazawa Station, take the bus to Korinbo Bus Stop (15 minutes). You will reach Nagamachi in 3-5 minutes on foot from the bus stop.

This is one of Japan’s most popular art museums. Located at the center of Kanazawa and just a few minutes’ walk from Kenrokuen Garden, this museum’s circular architecture encourages the guests to engage and experience the arts and exhibits however they want. Another intriguing feature of the building is the absence of facade or entrance, fostering fluidity by giving the guests space to appreciate the arts from various perspectives.

Works of contemporary artists from Japan and abroad are showcased here. One of the most Instagrammed exhibits is the permanent art installation by Leandro Erlich titled, “Swimming Pool”. 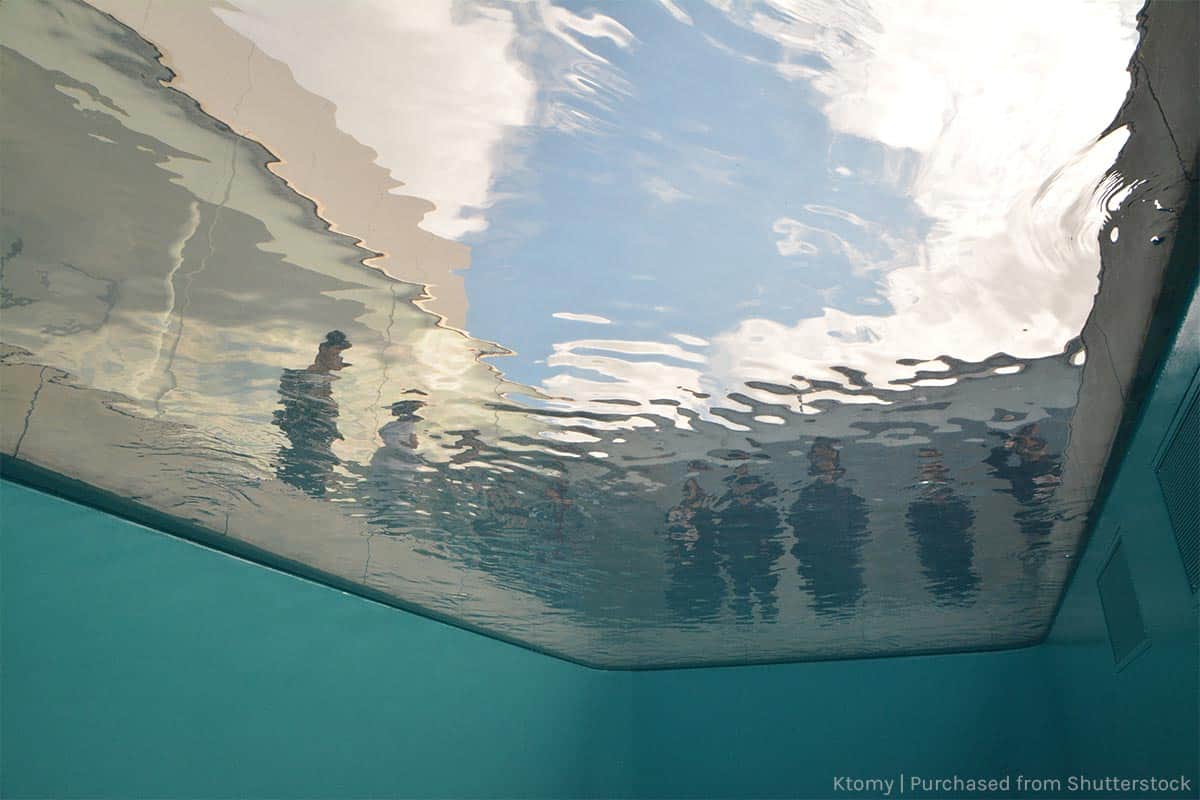 How to Get There: From JR Kanazawa Station, take the bus to Korinbo Bus Stop (10 minutes). 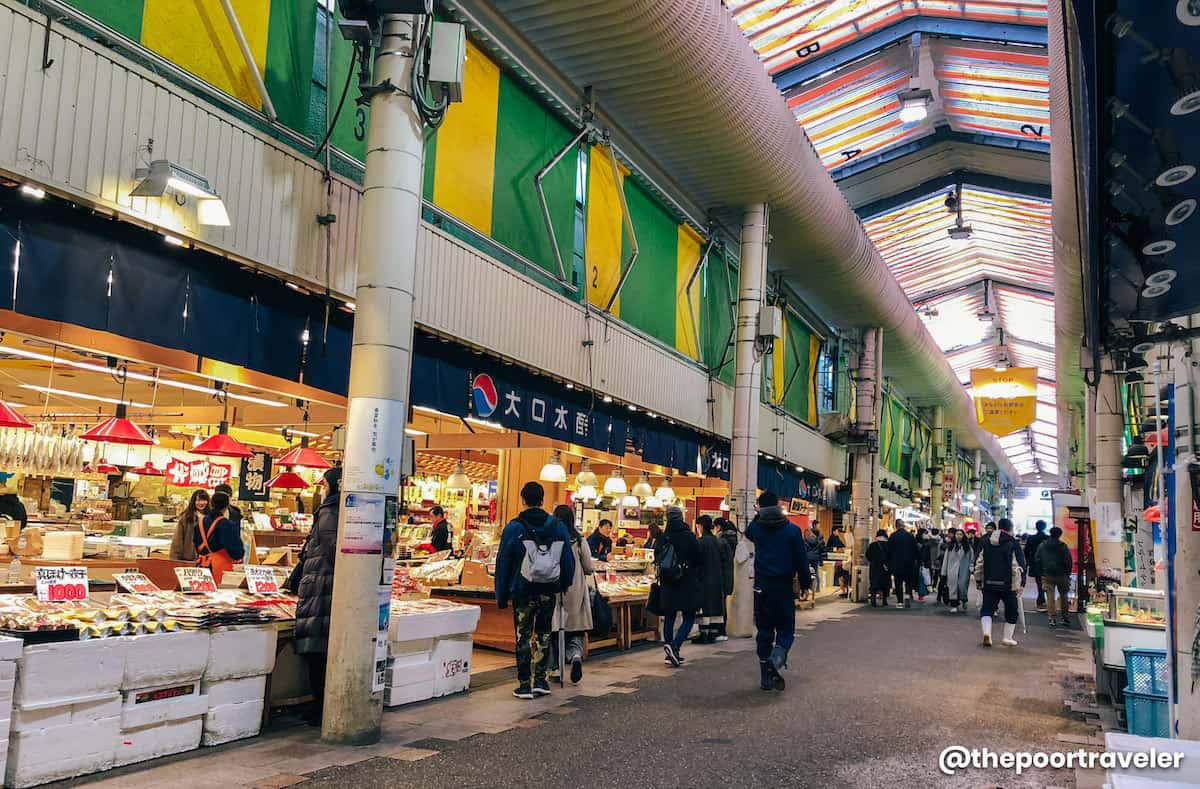 With over 200 shops, Omicho Market is hailed as Kanazawa’s largest indoor market, thus earning its title as “Kanazawa’s Kitchen”. Serving the city for about three centuries, Omicho Market has become a popular tourist destination. The shops sell a wide spectrum of products: seafood, fruits, vegetables, meat, snacks, food, drinks, flowers, clothes, etc. It gets really busy in winter when seasonal offerings such as snow crabs and sweet shrimps are available.

The crowd thickens in the morning and during lunchtime as there are also food stalls and eateries dotting the marketplace. Most of them are small, so expect long queues during these times. We had our lunch at Ichino Kura on the second level of Omicho Market.

How to Get There: From JR Kanazawa Station, take the bus to Musashi-ga-Tsuji Bus Stop (10 minutes).

During the Edo Period, strict building rules were imposed to avoid an uprising among the ruling feudal lords. For the Maeda Clan, they managed to dodge these restrictions and the proof of this ingenuity is the Myoryuji Temple. Apart from appearing shorter than it actually is, this four-story temple has a lot of secret chambers, trapdoors, hidden rooms, and confusing staircases. All of these features are part of its defense system. This deceptive design earned the temple’s nickname, Ninjadera.

How to Get There: From JR Kanazawa Station, take the bus to Hirokiji Bus Stop (15 minutes). You can reach the temple in 5 minutes on foot from the bus stop.

Launched in 2011, this museum is named after the person who had inspired many through his writings and philosophy. Daisetz Teitaro Suzuki played an important role in propagating Japanese Buddhist Zen in the west. Some of his works are showcased here. The Contemplative Space and the Water Mirror Garden are some of the popular areas inside the complex. The design of the museum is minimalist and creates an ambiance that is conducive to contemplation and relaxation.

How to Get There: From JR Kanazawa Station, take the bus to Hondamachi Bus Stop (15 minutes). You can reach the temple in 5 minutes on foot from the bus stop.

This public library was launched in 2011. The two architects, Kazumi Kudo and Hiroshi Horiba, who designed this modern building won an award for the library in 2013 given by the Japan Institute of Architects. The library features about 6,000 holes and a high ceiling, allowing natural soft light to enter the building during the day.

How to Get There: 15 minutes by car from JR Kanazawa Station. 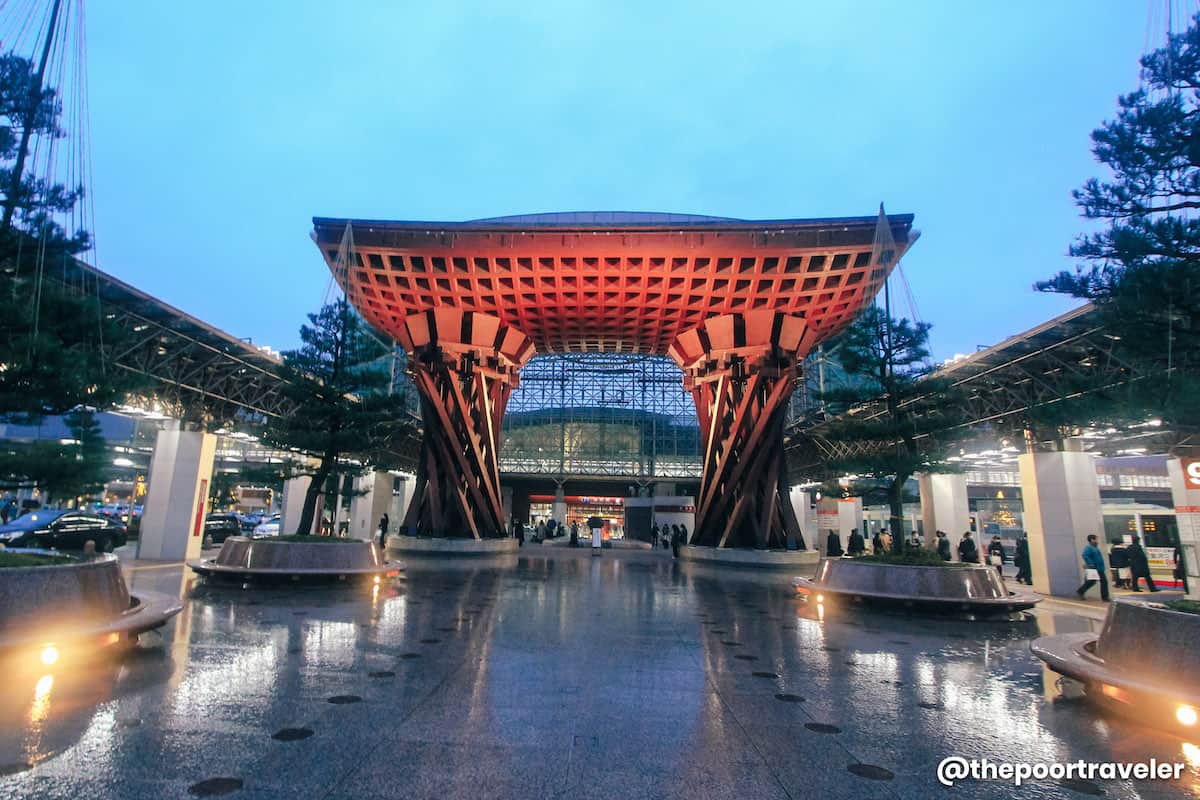 As we exited JR Kanazawa Station, an imposing structure greeted us — Tsuzumi-mon Torii Gate. A prominent landmark in the city, it represents Kanazawa’s cultural dynamics — a mixture of old and new through seamlessly weaving traditional and contemporary aesthetics. The monumental wooden torii gate stood out against the modern glass dome establishment in the background.

The pillars of the gate also embody the arts and entertainment that Kanazawa is most famous for — arts and entertainment, particularly Noh theater. The pillars resemble the tsuzumi drums used for the Noh performances. During the rule of the Maeda Clan of the Kaga Domain, Kanazawa flourished as a feudal castle town. It is said to be the golden age of Kanazawa. Traditional arts and crafts such as the gold leaf, the washi paper, and the yuzen silk are carried through to this day.

On our most recent trip to the Chubu Region, JR Central let us use the Takayama Hokuriku Area Tourist Pass, so we could see for ourselves how far it could take us. 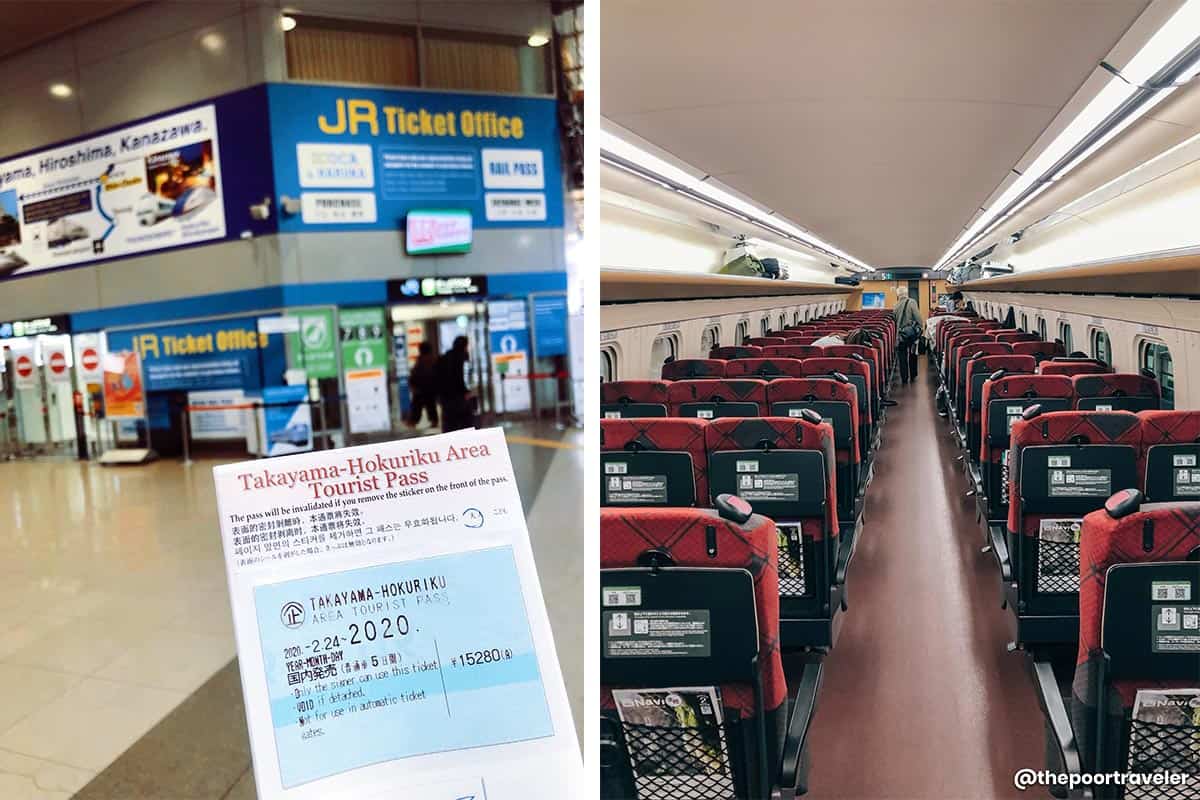 If you’re coming from Kansai Airport, Osaka, Kyoto or Nagoya, consider getting the Takayama Hokuriku Area Tourist Pass. You can save a lot on transportation fares especially if you’re on a multi-city trip. It gives unlimited rides on JR local and limited express trains, Hokuriku Shinkansen and buses in these areas:

You can purchase the pass three ways: outside Japan (through accredited travel agencies), in Japan (at JR ticket offices at train stations), and online.

The price of the pass is higher when you purchase in Japan, so if you want a discounted rate, purchase outside Japan or reserve online. Klook is offering this discounted rate for the 5-Day Takayama Hokuriku Area Tourist Pass.