The city of Nice is served by Nice Côte d’Azur Airport (NCE), the third busiest airport in France, welcoming almost 14 million passengers in 2018 alone. It is also the primary gateway to the French Riviera region, which encompasses several postcard-worthy towns and villages including Antibes, Villefranche-sur-Mer, Cannes, and Saint-Tropez.

The good news is, the airport is not too far from the city center of Nice, only around 6 kilometers and less than 30 minutes away. 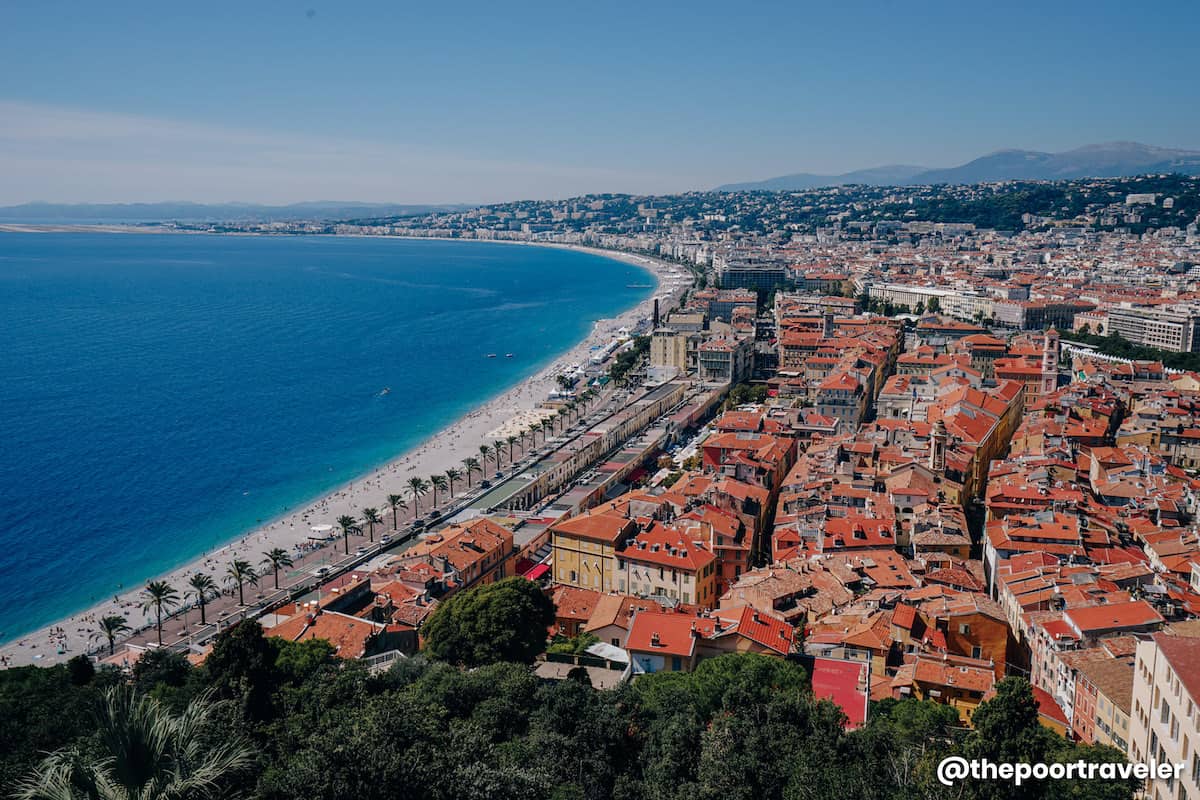 There’s not much updated information available online about how to get to the Nice city proper from the airport. Not in English, at least. Most of the tips we found suggest taking Bus 98 or 99. But when we arrived in Nice, we found out that these bus routes are no longer operational.

If your hotel is in the Old Town, Jean Medecin or in the area near the Nice Ville Station, the more reliable mode of transportation is the tram. Both Terminals 1 and 2 of Nice Airport are linked to the city center by Tram Line 2 (T2). You’ll find the tram station immediately after getting out of the Arrival Hall. Here’s how to get to the city center by tram.

1. Purchase a ticket from the machines at the station. 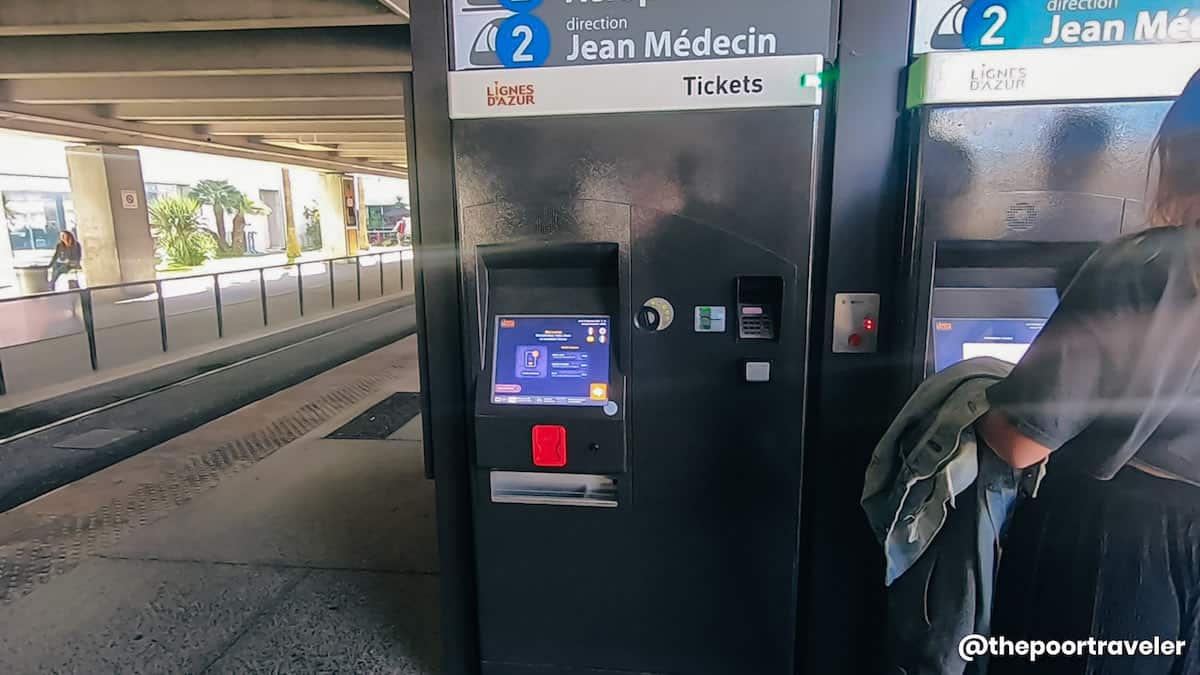 Coming from the airport’s Arrival Hall, you can find the station right in front of you. It’s pretty unassuming, but it’s hard to miss. Ticket machines’ interface is in French by default, but there is an ENGLISH option.

One-way single-journey fare is only 1.50€. The machine accepts euro coins and credit card only. Don’t forget to get your ticket before you leave! The solo ticket looks like this: 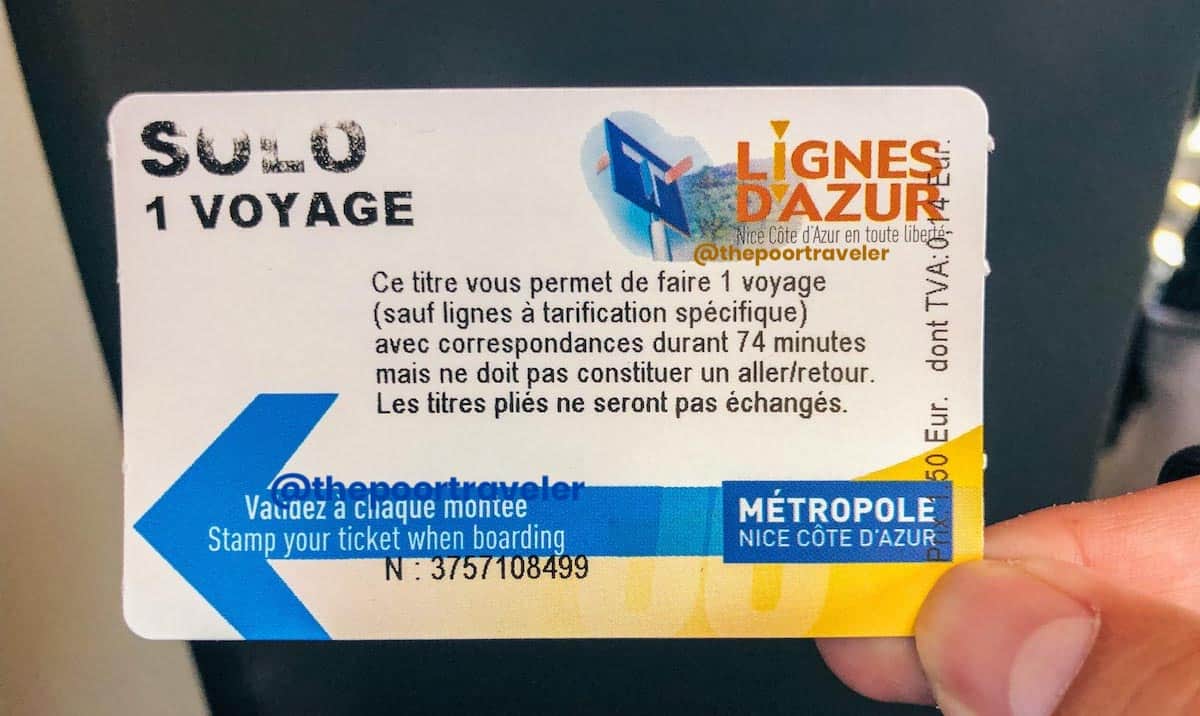 Aside from single journey tickets, you can also purchase a tram and bus pass, which comes in three variants:

Which pass is best for you depends on your itinerary and where you will be staying. If you can’t decide just yet, purchase a single-journey ticket first and then figure it out later on.

2. Take the tram to Jean Médecin. 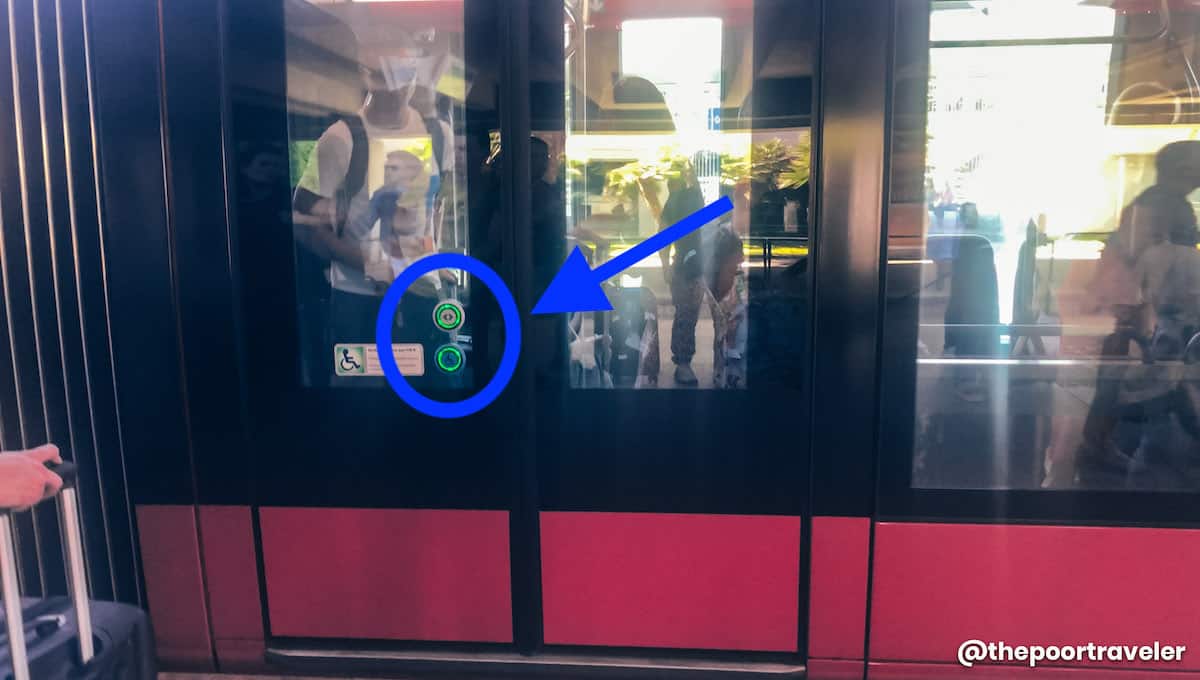 Press the OPEN button on the door if it doesn’t open (if no one’s alighting). Each door has one.

Do this immediately upon boarding. You’ll find validation machines onboard the tram. Just find the small box, insert your ticket (with the arrow down), and wait for it to stamp your card. 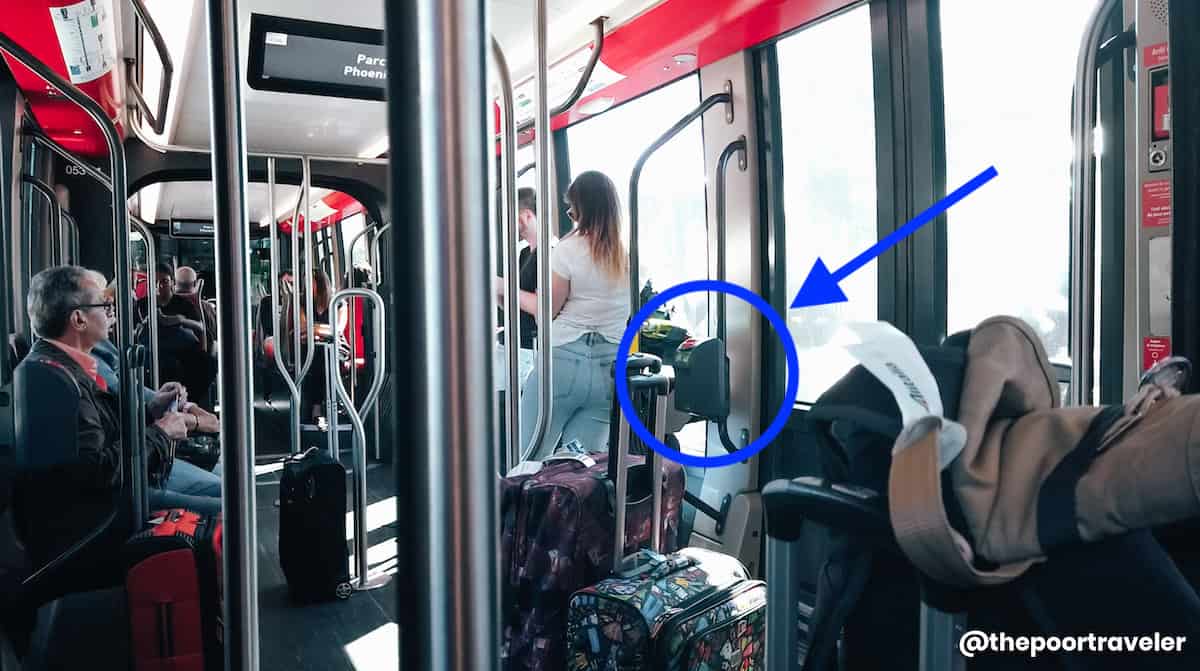 It is important that you validate your ticket. Spot inspections are sometimes conducted. If caught, you’ll be fined 30€.

This stop is located near the corner of Boulevard Victor Hugo and Avenue Jean Médecin. 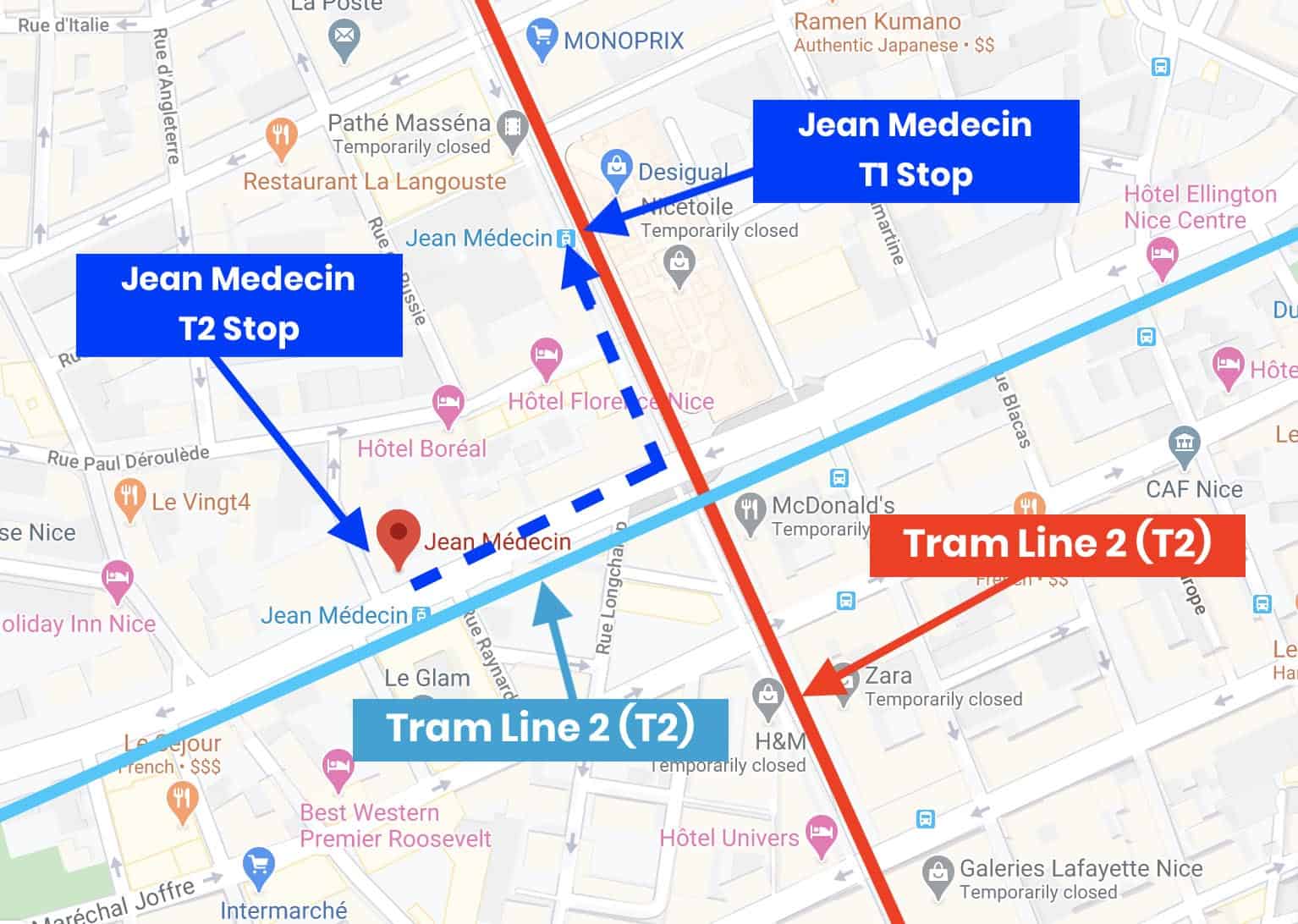 Avenue Jean Médecin straddles the railway (a short walk from the main railway station) to Place Massena (at the entrance to the Old Town). It is Nice’s primary shopping street and most popular area for tourists.

Expect a lot of people, especially tourists, to get off at this stop. Press the OPEN button if you’re closest to the door.

5. Make your way to your hotel.

You can travel on foot or transfer to Line 1, depending on the location of your hotel.

You can also travel on foot to Old Town or to Nice Ville Station. It’s a long walk, but it’s pretty easy because it’s generally flat. I prefer walking because the tram tends to be crowded at Jean Medecin station.

Here are top-ranking but relatively inexpensive places to stay in Nice, as scored by Agoda customers: