I have to admit that what we really wanted to visit was Guimaras and not Iloilo. But since the airport is in Iloilo, we decided to spend some time there. And we’re glad we did because Iloilo had a few surprises of its own.

The day before our flight to Cebu, we checked in at Fine Rock Hotel. Since we just arrived from Guimaras, we were so poor tired and hungry we figured it would be best to have lunch first before we start exploring the city. Fine Rock Hotel is within a few blocks of Robinson’s Iloilo so it was an easy choice for us. We picked a random restaurant and ate. Nothing remarkable, really. We were just so hungry we ate the first dish our eyes laid on. 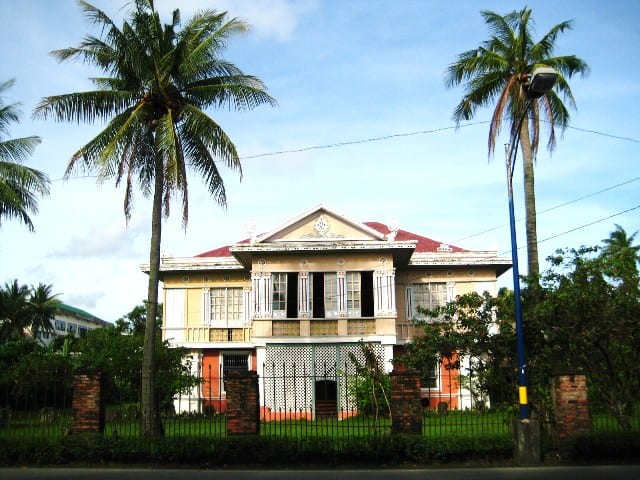 The Poor Traveler said it before: Ilonggos are really, really charming. On our way to Guimaras, Ilonggos have already shown us immense kindness, showing us where to go, guiding us along the way. Maybe not all Ilonggos are like that but we can definitely say that for all Ilonggos we have met.

Another testament to it is our visit to Jaro. We took a cab to Jaro. The Poor Traveler and his poor friend got worried when we noticed that the driver was driving so slowly. He even got much slower when we reached Jaro. We got a bit scared until the driver spoke and started to introduce to us the many old buildings in the city. “Etong bahay na ‘to Lopez ang may-ari nyan. Matagal na yan nakatayo. Itinayo yan nung 19 something-something.”

We then asked him so many questions about the city. “Ah, sikat po pala ang mga Lopez dito. E di kapamilya kayo?”

Anyway, after the taxi ride, we gave the driver a generous tip for suddenly turning into a tour guide. He dropped us off at the Jaro Cathedral.

Anyway, Jaro was somewhat busy and peaceful at the same time. It’s quite difficult to describe Jaro. When I looked at some parts of it, I was taken to the past but moving my eyes just a bit would take me back to the present. But it sure was relaxing. For some weird reason, I was reminded of my childhood. I dunno why. 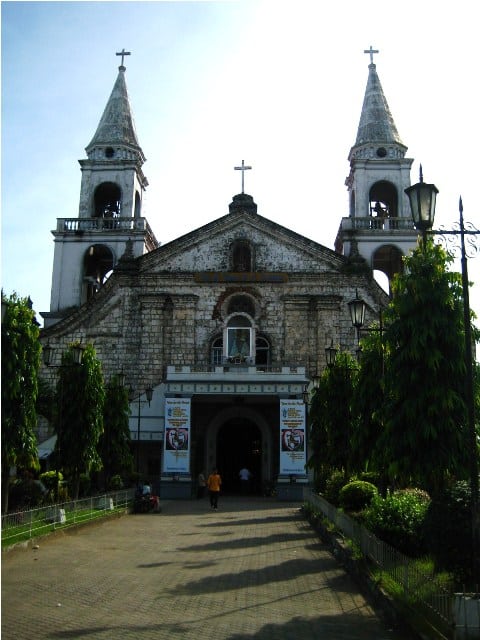 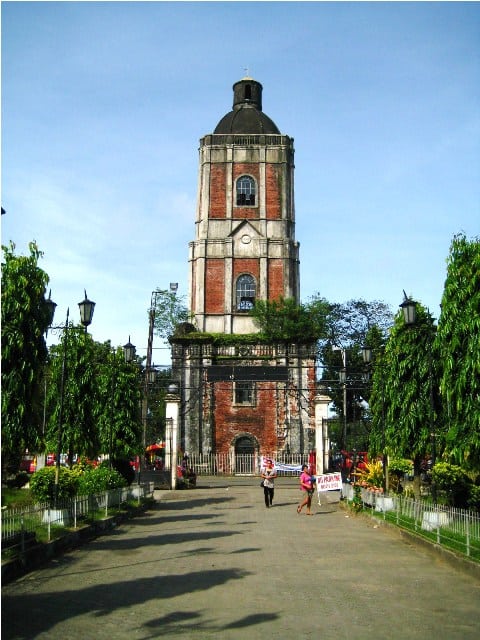 The Poor Traveler isn’t really religious but the Jaro Cathedral was beautiful. We found it weird that its belfry is several meters away, though. We entered the church and saw that it was undergoing maintenance or something. 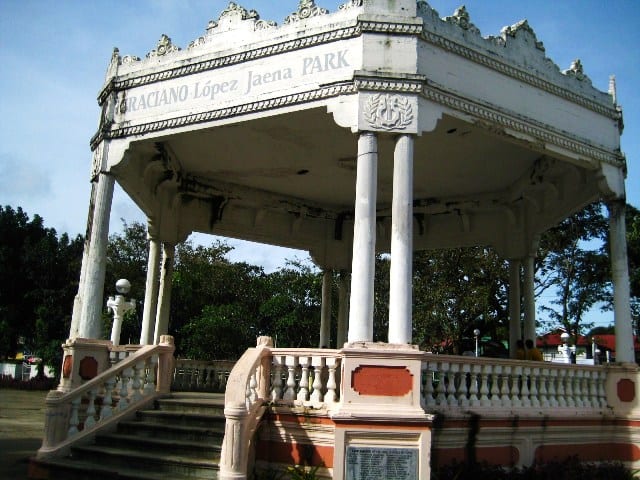 We then headed on foot to the plaza. It was just across the street. The plaza was named after Graciano Lopez Jaena and I was like, “Taga-dito rin pala sya?”

After mingling with the kids playing there, we decided to visit Biscocho House where we bought P1700-worth of pasalubong — butterscotch, piyaya, meringue, and more. 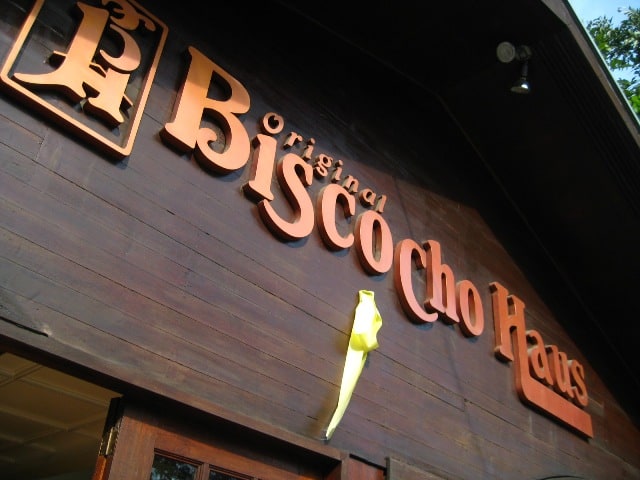 That’s about it. Since we were both tired from the Guimaras trip that morning, we proceeded to SM City Iloilo, had lunch, headed back to our hotel room and called it a night. We wanted to sleep early because the next morning, we would be flying to Cebu for the third day of our Visayas Tour.

Note that this was for 2 people. Divide it by 2 and the total expenses per person would drop to 720!

Another note, this excluded airfare. Remember that Iloilo was not really our target destination. We really wanted to go to Guimaras but since Iloilo is just along the way, we decided to just spend a day in this huge city. If we add our airfare, which was P1500 round-trip per person plus the airport transfer at P50, total expenses per person: P2270.00

But then again, if you’re already in Iloilo, might as well make an extra effort to visit Guimaras. Mas sulit!

hi, well to answer your question about the Belfry why it seems too far from the cathedral. It used to be a part of the church grounds–the Jaro plaza and the street surrounding it. When the road was created, it then separated the belfry from the church grounds.
You should have also tried Lapaz batchoy while you were there and visited Miag-ao church which is a UNESCO Heritage site.

The Poor Traveler
Reply to  echosera

Woot! I’ll sure visit Miag-ao Church next time I fly to Iloilo! :)

the old house which you have featured is owned by the Montinola’s..there is a small plate outside the gate that stated so.. along Luna St., LaPaz, that it is still a part of the City..you can find a lot of old Lopez’s houses/mansions, some are being donated already to some associations/society’s…
Iloilo is one of the Oldest Ciy in the Philippines and you can find a lot of “first’s” here…VISIT ILOILO, AND ENJOY THE CITY AND THE NEIGHBORING TOWNS…

Thank you for sharing that information! It’s always nice to learn from readers, too!

Hi! Sana may kwento rin about your trip to Guimaras. We are going there in October this year. Thanks

Hi Brigida! I have posted about Guimaras here: https://www.thepoortraveler.net/category/local/guimaras/

hello poor traveller, next time you guys will visit Iloilo i suggest you go visit St. Anne’s parish in Molo, and have lunch or dinner in Tatoy’s or Breakthrough Resto in Villa. :)

I enjoy reading your experience in my beloved city though. Thanks for visiting. hehe

The Poor Traveler
Reply to  manyakikay

Thank you so much for the recommendation! We’ll be back in Iloilo this June! We will surely visit those places, I promise. :)

Hi there. I’m from Iloilo btw. I suggest po if you really want an amazing yet affordable adventure, try going to Isla Gigantes in CARLES, ILOILO. It’s located in the Northern part of Iloilo Province. One word to describe the place, PARADISE! It’s like a mini Thailand in Panay. I swear it is beautiful there. You could check my FB ACCOUNT (nik_maf@yahoo.com) for you to see my pictures. I’m not a blogger kasi. Hihi. I posted it on my NOTES section. It’s set on Public naman so you could see it. Godbless po! Enjoy traveling

The Poor Traveler
Reply to  Anonymous

just researching about iloilo that’s why i’m here… just want to share regarding the belfry… most old churches, as in very old, have their belfry far from the church itself.. because the church in those times own hectares and hectares of land… if you’ve been in ilocos all churches there are like this… ^^

The Poor Traveler
Reply to  cesz

hi. i was just browsing around and saw that this is almost 10 years old. iloilo has developed a lot since then, but has retained its charm and flavor. please visit us at iloilo.gov.ph to know our province and city better.