I love walking. I think it’s the only form of physical exercise that I do these days. And I specially love walking in Singapore. There’s comfort in knowing that you’re safe, and there’s just so much to see.

This wasn’t my first time to do this walking-slash-sightseeing tour. I did it two years ago after dinner at Makansutra Gluttons’ Bay. After dinner I just noticed how pretty the entire place was and started walking aimlessly. I just followed the signs. This time, I wanted to start the walk at Raffles Place because I never had a chance to visit this place the first time I was in Singapore. So here you go.

Note that I did not hire a travel agency for this walking tour. We just did it on our own and now I’m sharing how we did it — Do-It-Yourself style!

How to Get to Raffles Place

Said to be the city-state’s central financial district, many key buildings in Singapore are in Raffles Place. The moment you come out of the train station, you’ll be welcomed by this futuristic sight although the exterior of the MRT Station adds a back-to-the-past twist.

1. Find the Chevron House. You shouldn’t miss this building because there’s a big, blue signage in front of it.

2. Enter the building through Change Alley.

3. Walk through the alley and check out their shops and cafes. There are also several money changers here. (They have good rates, better than the one at the airport. Hehe.)

4. At the end of Change Alley is Collyer Quay, adjacent Raffles Place. Follow the traffic and you’ll see the beautiful and topnotch Fullerton Hotel.

5. Cross the street towards Fullerton Hotel. I just couldn’t help but take photos of the Fullerton Hotel from all angles almost endlessly. It’s just so magnificent. 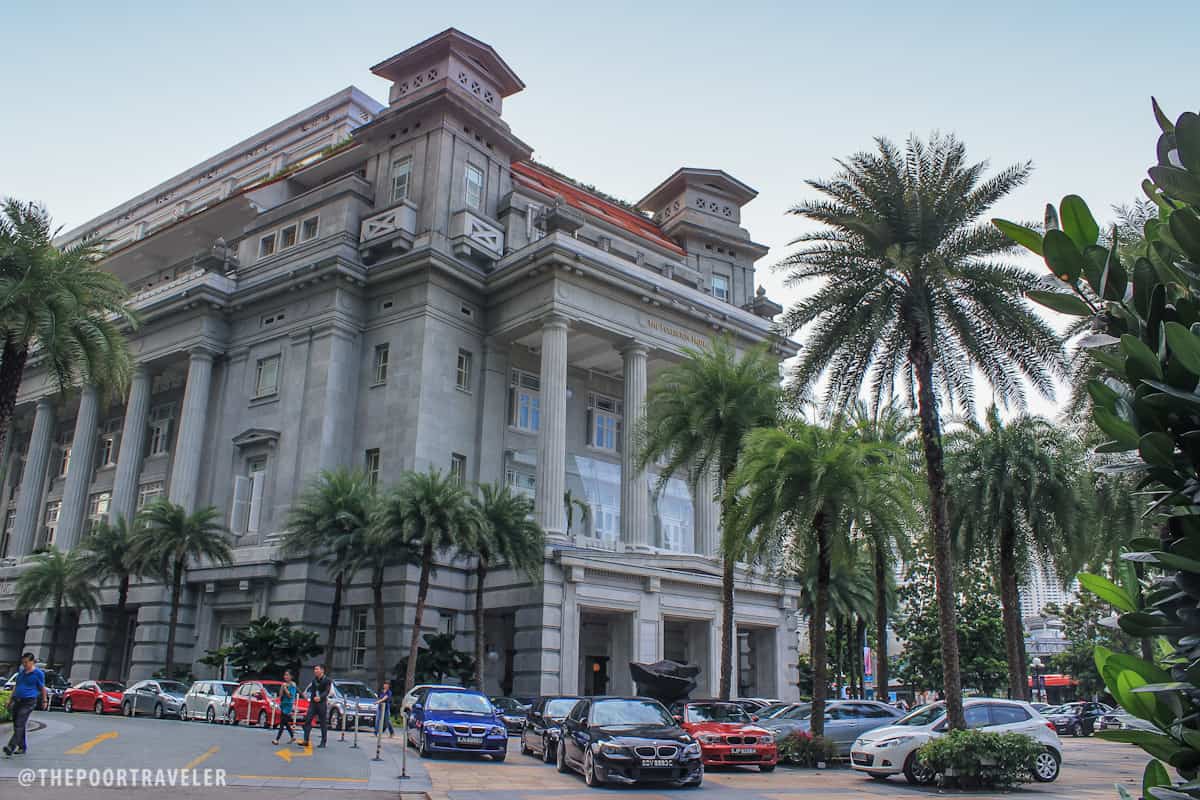 6. Enter the atrium of the Fullerton Hotel, to the basement and take the underpass. At first, I was afraid to enter, intimidated by the majestic design of the hotel. Apparently, people really enter the atrium to get to the other side of the street — One Fullerton. 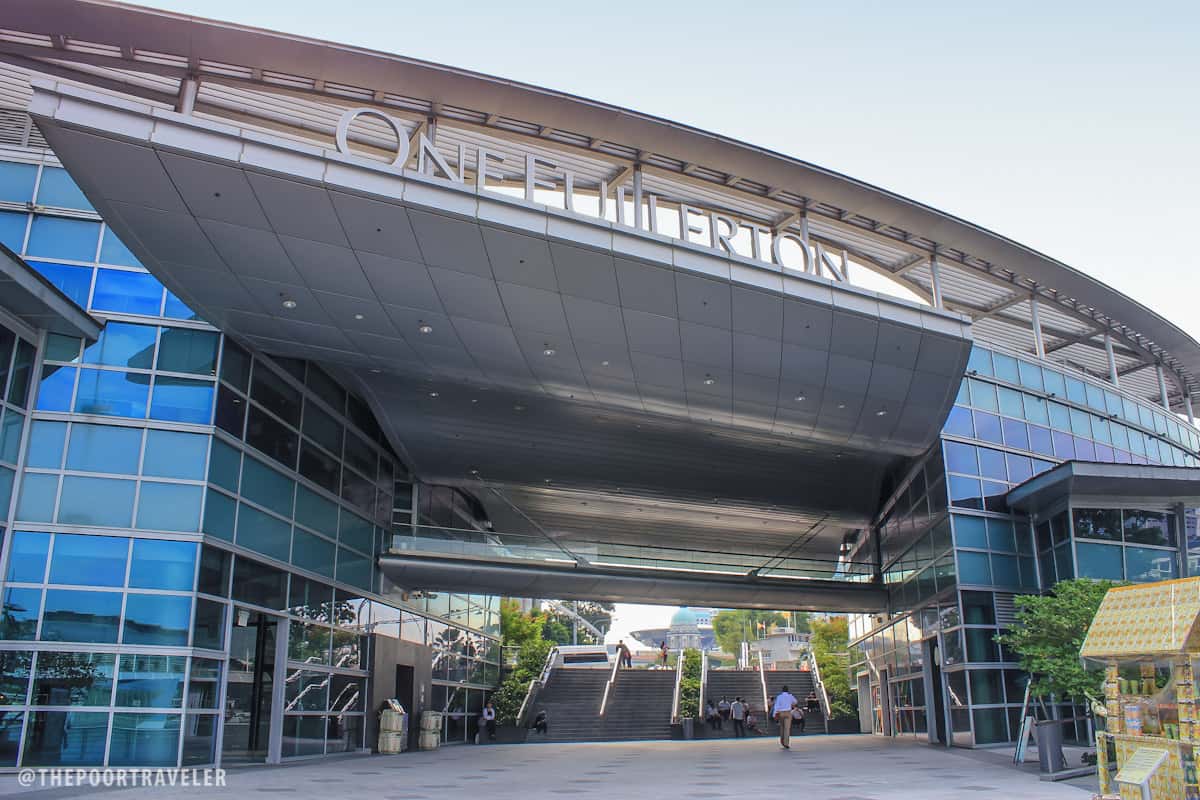 7. Enjoy the view at One Fullerton, a stretch of waterfront restaurants and cafe. You know you’re at the right place when you see the imposing and spectacular Marina Bay Sands.

8. To your left, the Merlion Park! Enjoy!

The Merlion Park and Esplanade are two of the most easily recognizable landmarks in Singapore. They also stand across each other, on the opposite sides of the rivers. As some of my friends say: You have not been to Singapore unless you have a pic of you at the Merlion Park. And it seems true because of the volume of people at the site. There are just so many tourists doing what most tourists do — take photos. This is one of the best selfie spots with the grand Marina Bay Sands in the background. 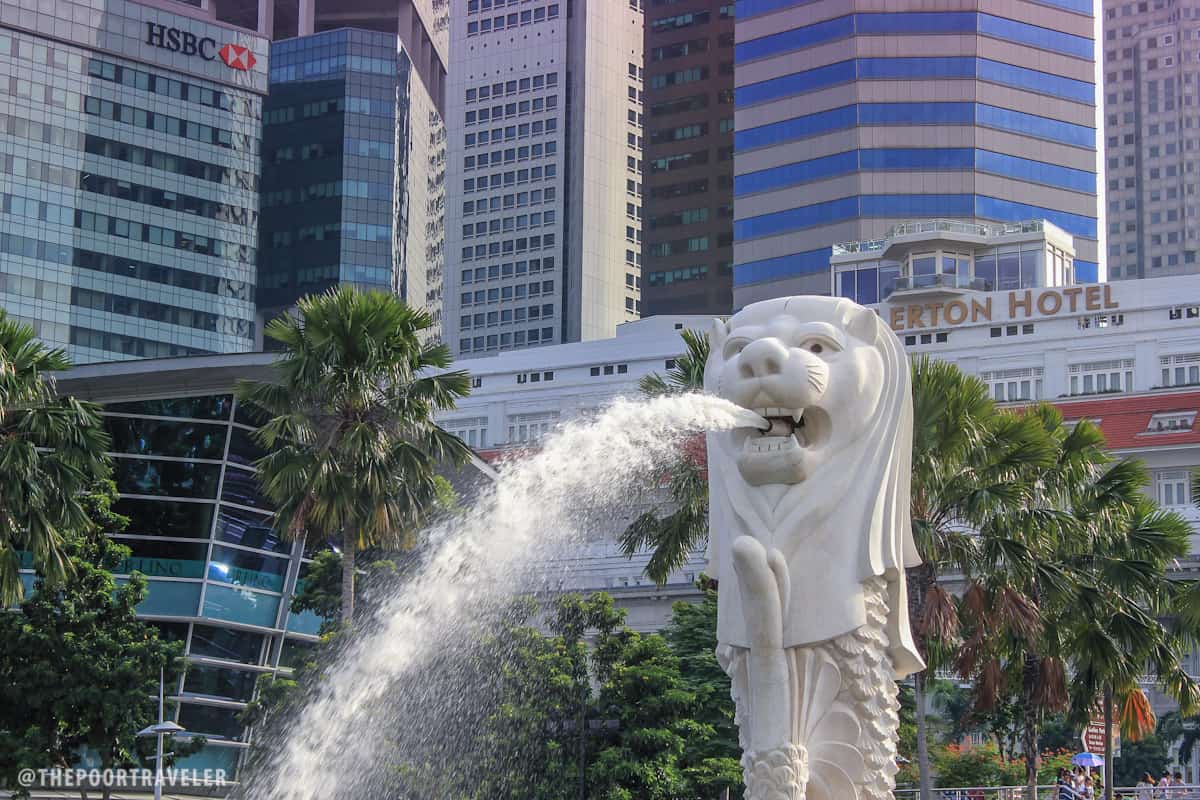 From the Merlion Park, our next stop was the Esplanade, the Durian-shaped buildings across the river. Here’s how to get there.

1. Walk under the Esplanade Bridge (the flowery one) and go on until you see another bridge, the Anderson Bridge. 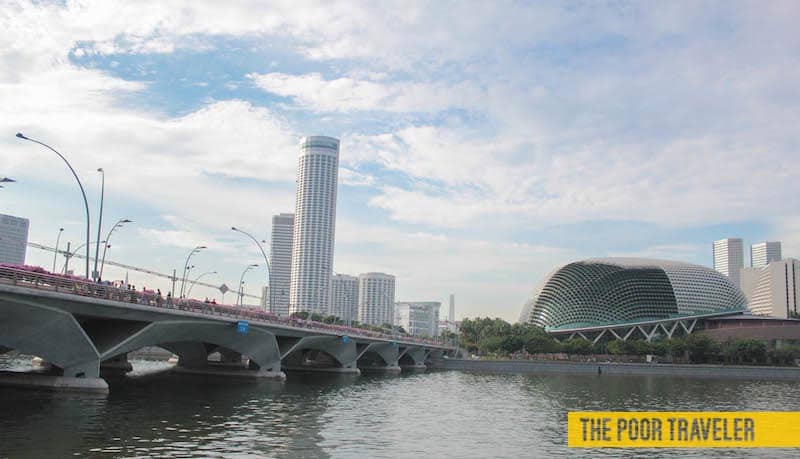 2. Cross the Anderson Bridge and walk to the Esplanade Park. It’s that pocket of greens in the area. From here you will see a number of majestic buildings including the Victoria Theatre and the Supreme Court of Singapore. 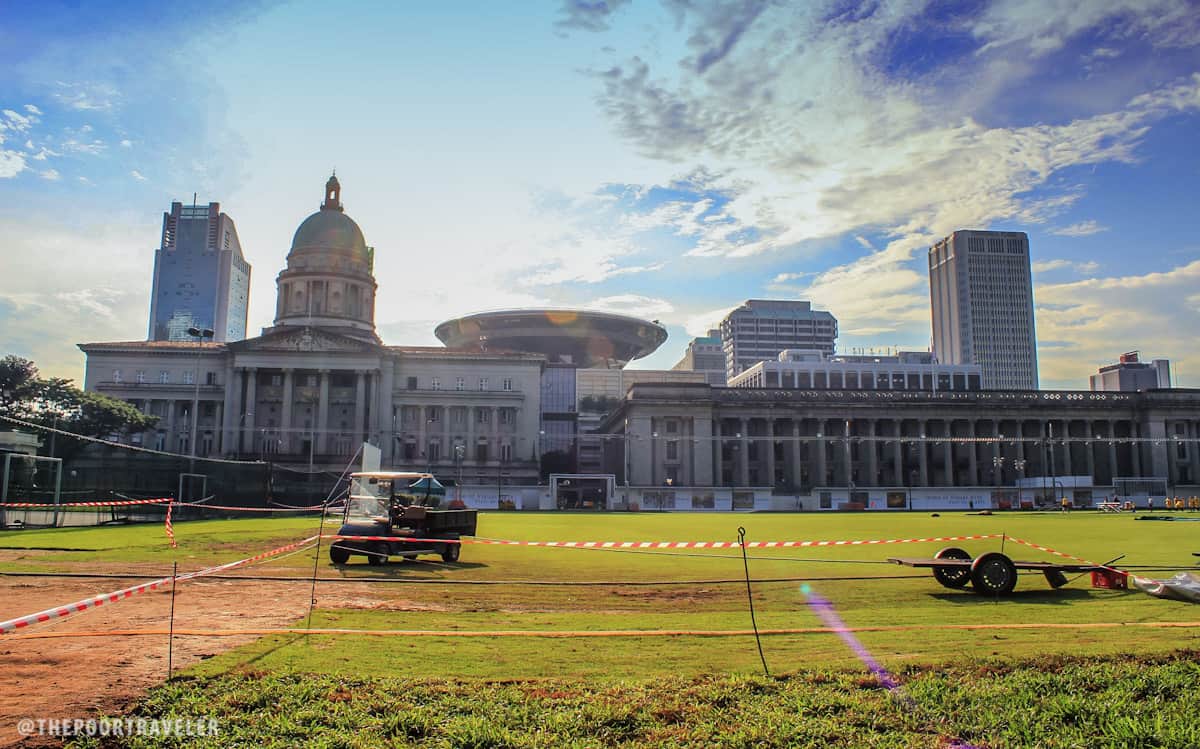 3. To your left you will find the Asian Civilisations Museum, one of the national museums of Singapore. It aims to promote the cultures and history of the many civilisations in Asia that compose Singapore’s multi-ethnic society. It’s a museum so allow at least two hours.

4. Walk back to the river, and then along it towards that durian-looking architectural beauty, the Esplanade. 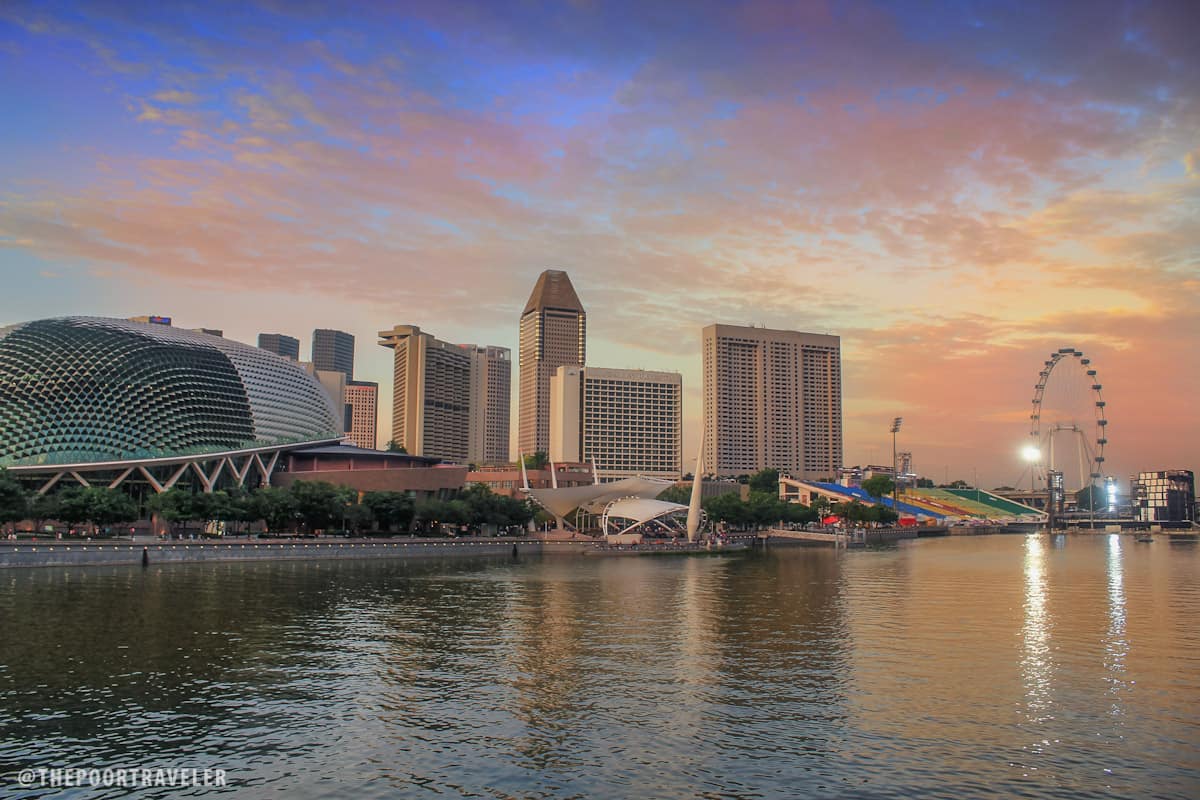 5. You’ll find yourself walking under the Esplanade Bridge where we saw several skater boys.

6. Continue walking and you’ll see an outdoor theater to your right. If you’re lucky, you’ll get to see a performance for free. First time I was here, there was a shadow dance. This time, there was a band preparing for a show. Enjoy. 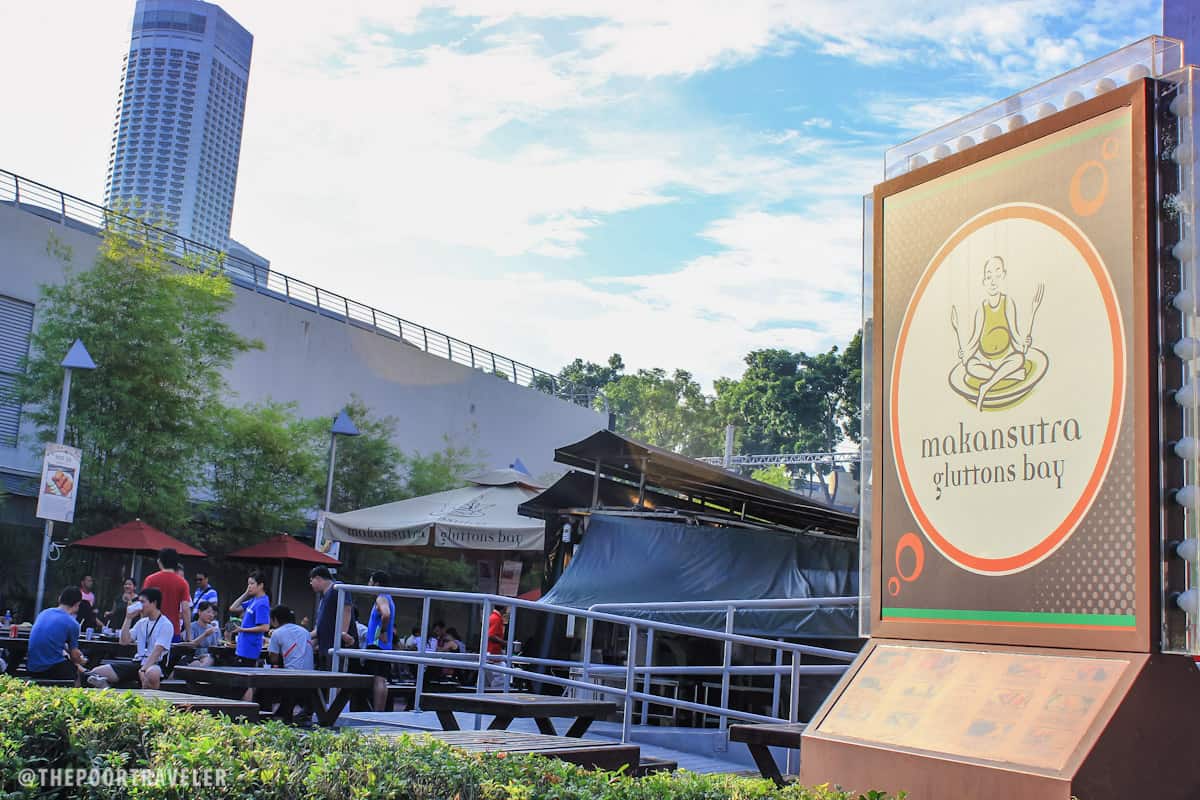 I had dinner at Makansutra. After dinner, we saw an ice cream vendor and bought some. I remembered the Amazing Race featuring eating ice-cream Singapore-style in one of their episodes a few seasons ago. It was big and very tasty. S$1 each.

To Marina Bay Sands and Gardens By The Bay

By now you’re already oriented with the location of Marina Bay Sands as its three buildings tower over the area. 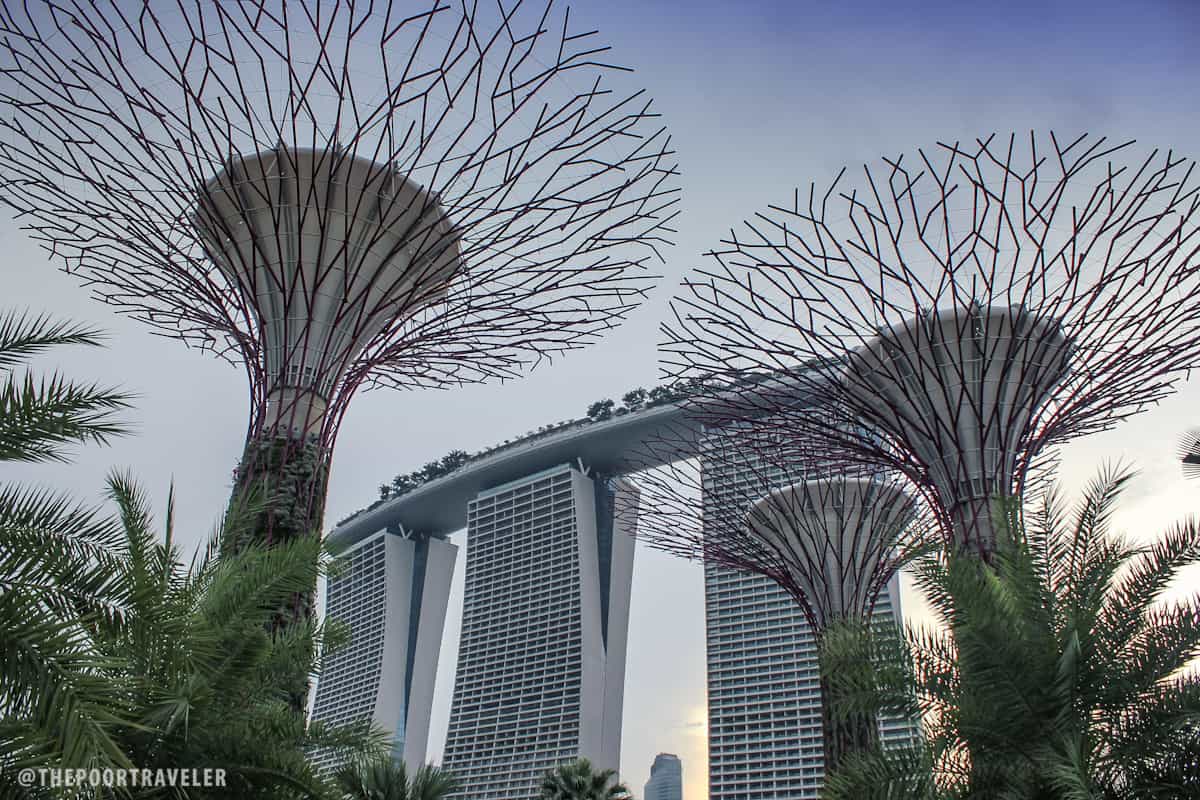 wow..i’ve been to SG too, and i want to go back..its really a nice country, clean, good governance, people are nice but hate to say few lacks personal hygiene…ewww

How long did your river walking tour take? 2 hours?
Thanks.

The Poor Traveler
Reply to  Krispa20

Hi Krispa20! 3-4 hours I think, including dinner time, which took so long because finding a vacant table was such a chore! haha

Hi, may I know if it’s okay to do this walking tour at night? We have a little time in Singapore and 9:00 pm onwards at Friday night will be our best time to do this. Is it worth it to do the walking tour around that time?

If we follow this walking tour. How many minutes must be alloted for each stop just to make sure that we reached Gardens by the Bay at 3 PM. Thank you!

Hi, I’m going to Singapore soon and found your post while doing research. As an update, they already have the Esplanade Bridge so you can walk from the Merlion to the Esplanade mall and through the boardwalk toward the Helix Bridge. That makes the trip around Marina Bay easier! I would also suggest walking around the Asian Civilizations Museum exterior along the Singapore River because there are a lot of good sculptures there, before crossing Anderson Bridge toward Merlion.