The Singapore Food Trail is an open-air complex of food stalls offering a variety of Asian foods. But what really sets it apart from the other dining attractions in Singapore is the vintage atmosphere it fosters. The overall look and feel of the place, especially the interior design, is reminiscent of Singapore in the 1960s, an interesting counterbalance to the modern and futuristic Singapore Flyer towering above it.

When we were there, the most difficult part of the lunch was choosing the stall. The food items displayed on every stall were all inviting. The vendors in this food complex include Boon Tat Street Barbeque Seafood, Alhambra Padang Satay, Hill Street Tai Wah Pork Noodles, Rong Chen Bak Kut Teh, and Bugis Street Famous Hainanese Chicken Rice. 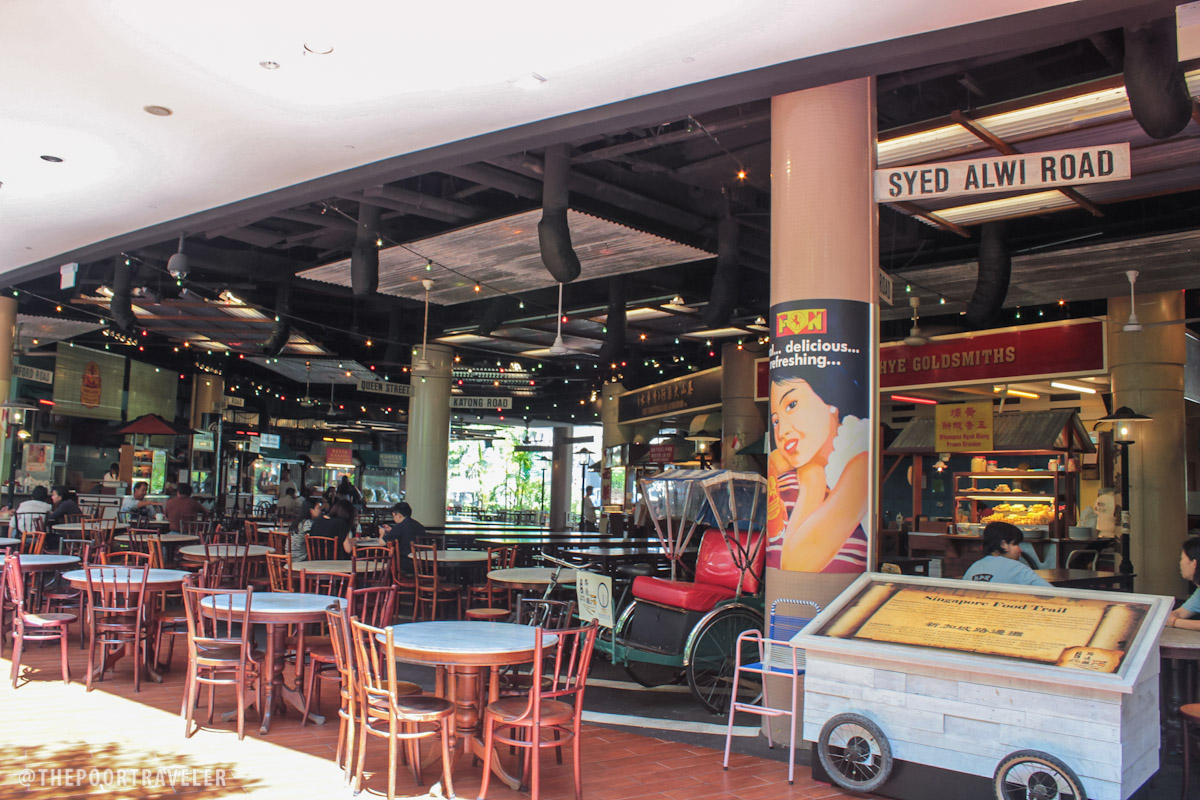 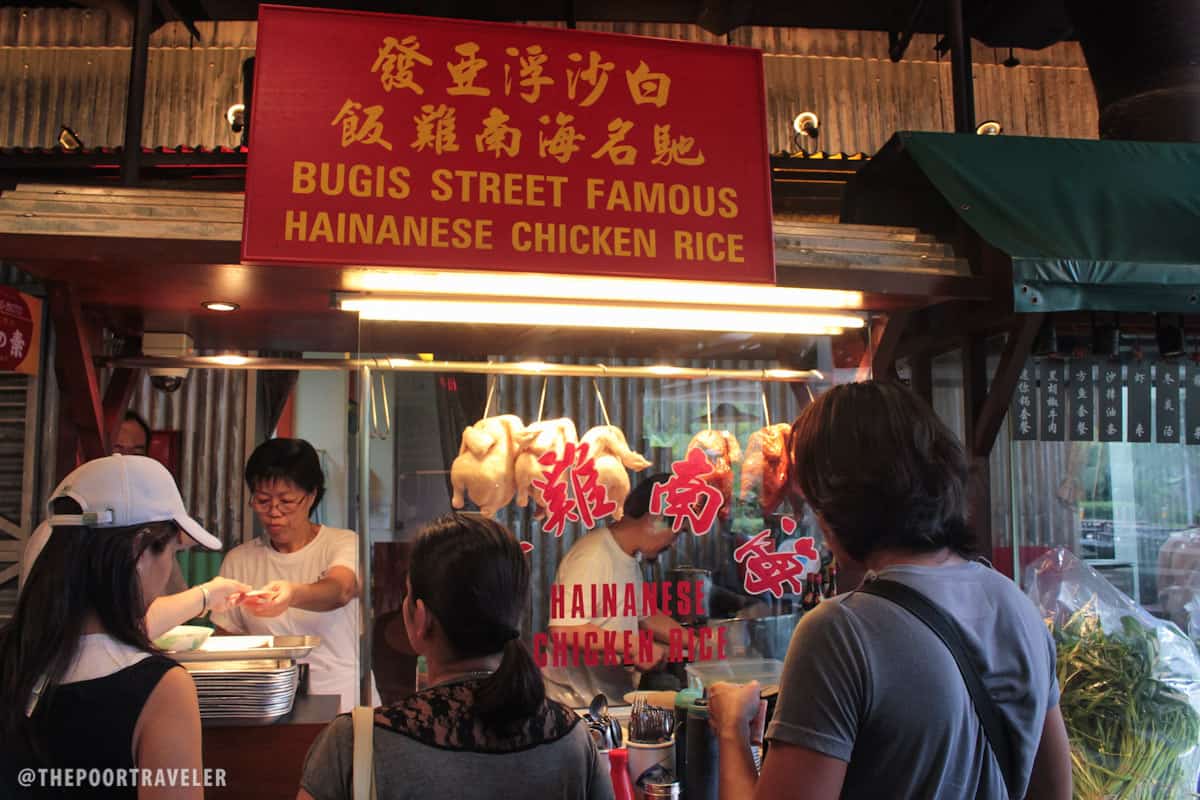 My travel partner and I did a quick round and found too many tempting dishes; we could not choose. Noticing the long queue in front of Bugis Street Famous Hainanese Chicken, we assumed that there had to be something special about it so we followed the pack. They offer Roast Chicken and Hainanese Chicken Rice at reasonable prices.

I loved how tender the chicken meat was. It was so soft (but not the mushy-squishy kind of soft) that it easily absorbed the flavors of the spices. The sauce was fantastic. The taste was subtle and it enhanced the flavor of the chicken.  I don’t know how to describe it. It just tasted really good.

When I saw a dimsum stall at the other end of the food court, I instantly had a craving for siew mai (siomai). Unfortunately, Hannah (FlairCandy.com) and Winston (BatangYagit.com) beat me to it. The stall had only prepared a few and Hannah and Winston got the last pieces. I wanted to steal the plate of siew mai from Hannah and Winston but I figured, what the heck. #Kidding 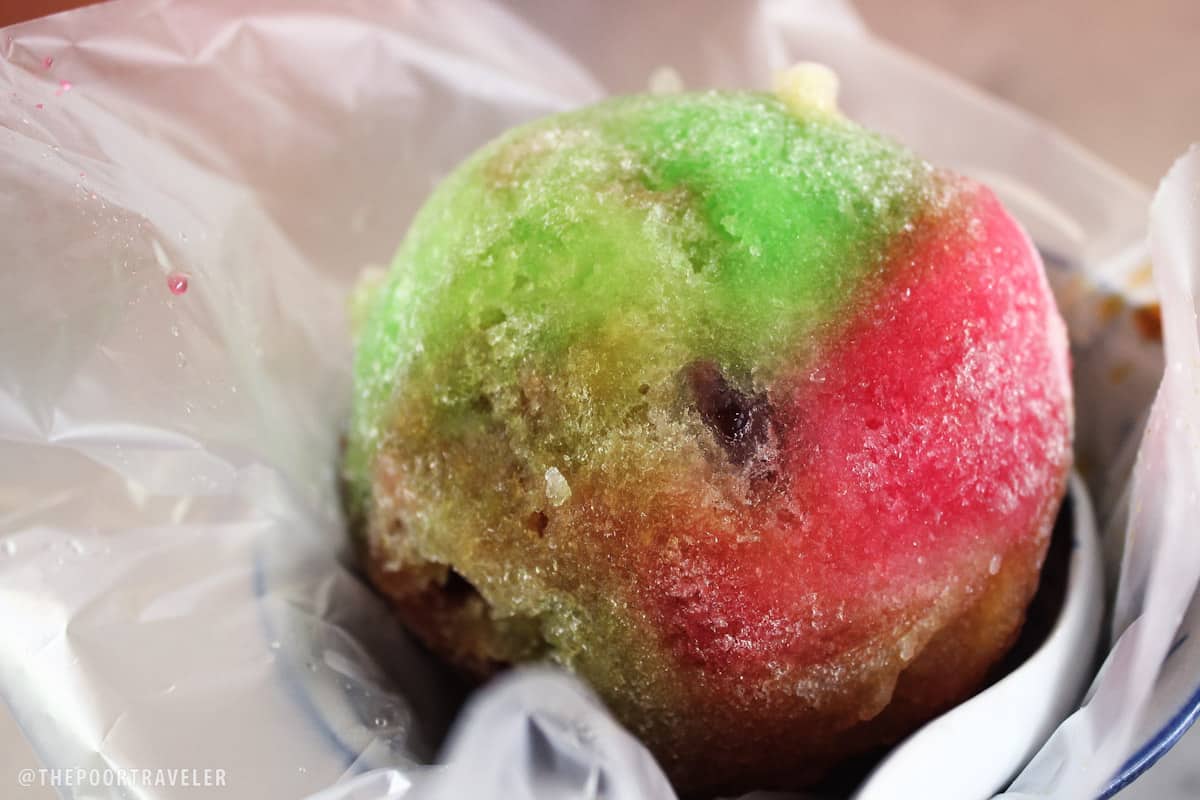 The drink we ordered was called Bird’s Nest Drink. I must admit that I found the name curious and it was the only reason I ordered it. But it tasted good. It reminded me of our very own gulaman, except paler.

For dessert, I had an Ice Ball, which I ordered out of envy. I saw another tourist carrying a colorful ball of ice and I rummaged through the entire food court, searching for the stall that offered it only to find it at the very entrance to the Food Trail. I watched as the Ball was prepared. It was very much like the Philippines’ halo-halo but ball-shaped. At the core of the Ice Ball was a sweet brown, yam-like filling, which I could not figure out. But it really did taste like halo-halo.

Overall, the Singapore Food Trail did not disappoint! We loved the food and the ambiance. It was definitely cheaper than many other food courts in Singapore. We had a terrific time!

How to Get to the Singapore Food Trail

You may take the MRT to get to the Singapore Food Trail. Remember that it is located at the base of the Singapore Flyer. There are two ways to get here via the MRT. You may choose to alight at City Hall Station (North South Line) or Promenade Station (Circle Line).

If you alight at Promenade Station, take Exit A and follow the pedestrian signs to Singapore Flyer. It’s a 5-10 minutes of leisurely walk.

If you alight at City Hall Station, cross the road to Coleman Street. Look for a bus stop beside St. Andrew’s Cathedral. Catch the shuttle bus. There’s one every half hour from 1oam to 11pm. The bus will take you straight to the Flyer.

Hi! We are delighted to read about your wonderful experience at the Singapore Food Trail, it makes all our efforts worthwhile :)

We hope you’l visit us in the future again to try our traditional dishes, prepared by famous hawkers who have been in the business for at least 20 years!

In addition, we’d love to extend an invitation for all your readers.

Should you visit Singapore from October-30th November this year, come down to the Singapore Food Trail @ the singapore flyer. we will be having a venue wide 20% off promotion, as well as a special promotion on that absolutely delicious and flavourful chicken rice.

once again, thank you, the poor traveler, for your wonderful comments :))