You know what they say: The best things in life stink.

Yes, they say that. Oh there’s no such saying? Well then, let’s make it a thing. Because if our trip to the Ijen Crater is any indication — I’ll say it again — the best things in life stink.

Armed with a regular dust mask and a sci-fi-worthy gas mask, we went on a trek to the famous crater of Mount Ijen in Banyuwangi in East Java, and no amount of foul-smelling gas emissions could stop us. After all, it is not every day that we see one of Indonesia’s most captivating volcanoes. That’s saying something because Indonesia has more active volcanoes than any other country. It’s like in the early days of this planet, the volcanoes of the world congregated and decided to reside there permanently. Indonesia just has a lot of them in all shapes and sizes: the destructive, the powerful, the dormant, the beautiful. And in a land dominated by these often ill-tempered buddies, somehow Mount Ijen manages to stand out. Thanks to the famous blue flames it vents out on a regular basis.

Yes, blue flames. Even I could not believe it at first. The stunning blue fire forms when sulfur gas comes in contact with oxygen. It burns and later cools, which then becomes the sulfuric rocks that fill the slopes of this 20-km wide caldera. Sulfur is also to blame for that nasty stench that most volcanoes are notorious for. But what the nose can hardly take, the eyes can appreciate. Of all the places I had set foot on in Indonesia, Ijen is the most breathtaking. Literally, at times.

If you’re planning on searching for Ijen’s blue flames, here are some things you need to know.

1. It is best enjoyed at night.

I had never hiked at night before so I was silently freaking out at first, but being part of a group calmed my nerves instantly. But like many other pleasurable things in life (not what you’re thinking, LOL), it has to be done at night because the darker it is, the more visible the flames are.

Make sure you have plenty of sleep. Hit the sack early so you have enough energy to get you through the trek.

2. The trek takes around 3 hours one-way.

The ascent to the rim takes 2 hours. And from the ridge, the descent to the crater where the blue flames are takes 45 minutes. Of course, it all depends on how fast you are.

But know that while it is a relatively easy climb, the environment may affect your speed. It’s harder to breathe not just because of the altitude but also the sulfur in the air. You might find yourself taking a lot of breaks just to catch your breath. True story. I started the trek at 1:30am and reached the damn flames at 4:00am. 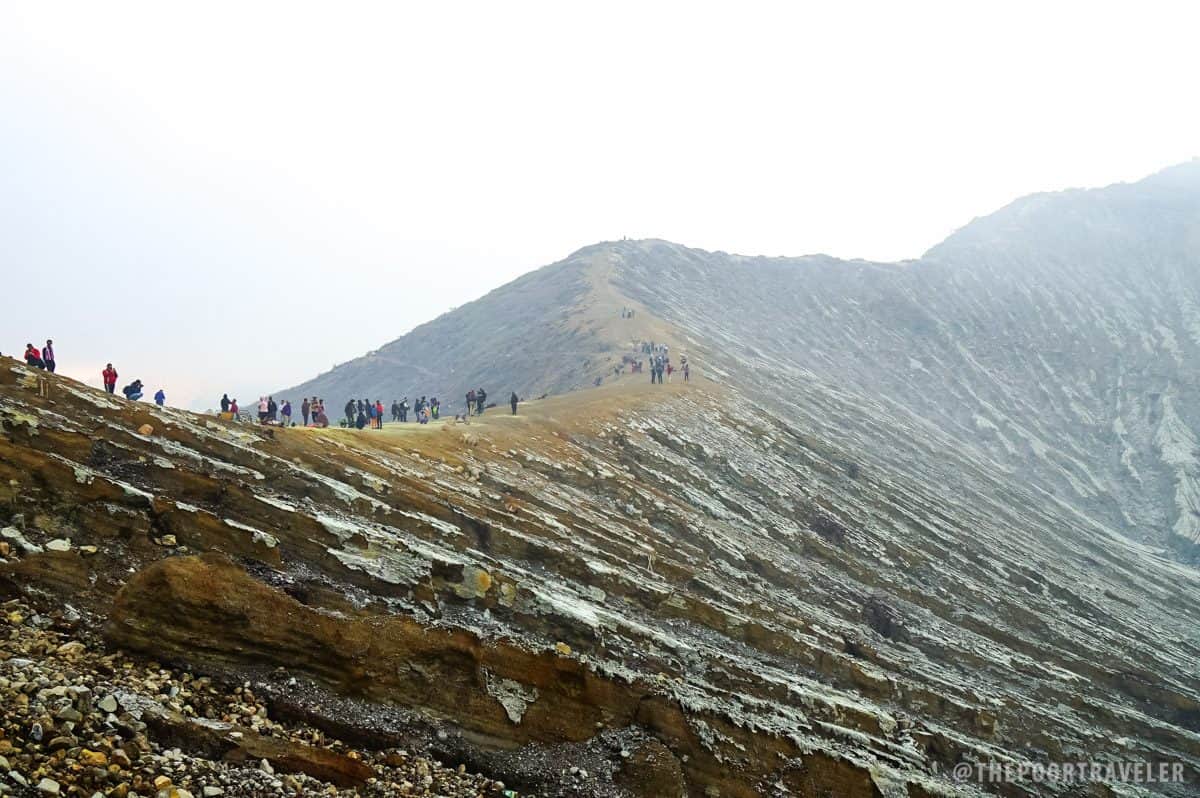 3. You don’t need to be an experienced mountaineer to climb Ijen.

I’m not an experienced hiker, but I found the trail not really easy but not difficult either. Just make sure to stop and take some rest when you feel like your body is reaching its limits.

If you’re an experienced hiker and you have the stamina, it’ll be a walk in the park for you.

But it’s NOT for people with respiratory conditions. The environment here is harsh to the lungs. If you have medical problems like asthma, you’re gonna find it tough to conquer this beauty. It is also not advisable for people with extremely sensitive eyes.

The smell is tolerable for the most part of the journey, but it gets stronger and stronger as you move higher and closer to the crater. If you’re going down to see the blue flames, it is highly recommended to rent a gas mask at the rim for 50,000 IDR.

5. Wear warm clothes and comfortable shoes. Remove the bling from your body. 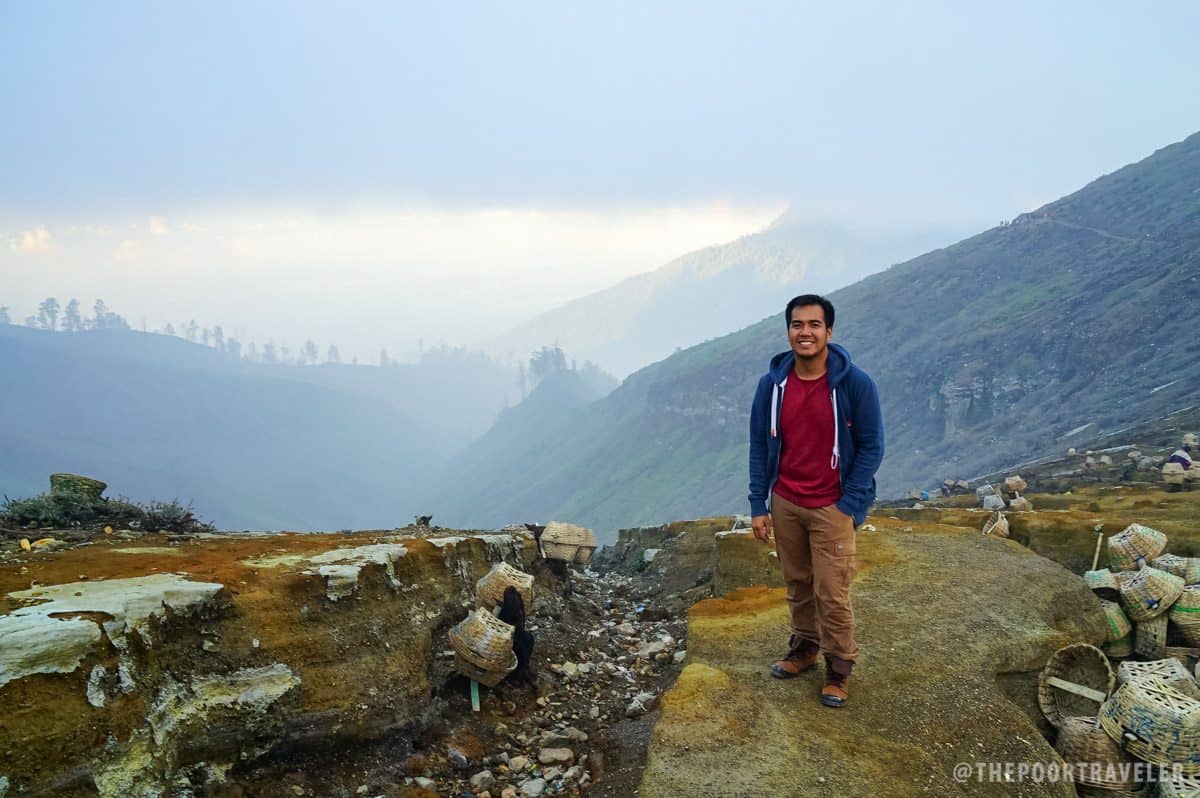 It was 11C during our visit. Make sure you’re prepared for the cold. You might also want to bring an extra shirt because while it is almost freezing, you’ll be sweating a lot. But don’t bring too much. You don’t want useless baggage weighing you down during the climb.

Don’t forget to wear comfy hiking shoes. There are slippery parts so slippers are a no-no.

You’re also encouraged to remove all the jewelry from your body and keep them in your bag because the sulfur around might damage them.

6. Be considerate to locals.

You will encounter locals along the way, mostly workers mining sulfuric rocks and transporting heavy baskets of them. If you feel tired just walking, imagine how they feel with kilos and kilos of load on their shoulders. If you cross paths with them, give way and let them pass.

Bring a few bucks, too. There’s a store/canteen halfway to the rim. Help the locals by buying yourself a cup of tea or coffee.

Trekking in the cold and breathing sulfuric air can make your throat dry. You’ll also be sweating a lot, so make sure you’re hydrated.

8. Make sure you have enough time to see the blue flames.

You have until dawn to see the flames, but to be safe be sure you’re at the crater by 5am. The moment the sky lights up, they won’t be as visible anymore.

You’ll be sharing the viewing space with several other tourists. Be very careful not to get too close to the flames. There are watchers nearby and if you get too close, you’ll hear a loud whistle and shouting. This is for your own safety.

9. Catch the sunrise from the rim.

Don’t be like me! I immediately went back to our base camp and completely and stupidly forgot about the sunrise. But my friends Sarah of FashionEggplant and Jelito were able to capture the golden rays. Here are some of their glorious sunrise pictures!

10. You may join a tour or go there DIY-style from Banyuwangi, Surabaya, Yogyakarta or Bali.

Ijen Crater tours are offered in Bali and other East Javanese cities, but you can also do it yourself. They have their own pros and cons. DIY means you will have to make your way to Ijen, rent a 4×4 ride, and bring headlamps yourself. It’s great if you need full control of your time and don’t want to be dragged by other people. Here are the fees you need to settle:

If you join a tour from neighboring cities, all you need to do is pay and show up. The rates vary according to the itinerary and the number of people in the group. But the rule of thumb is, the bigger the group, the cheaper the tour. That’s because there are more people dividing the cost. The tours are sometimes bundled with trips to other destinations in East Java like Mt. Bromo.

This was part of #TripOfWonders, a blogger tour organized by Indonesia’s Ministry of Tourism.

thank you vinssssss! miss you. haha

I will wait your respon