Up in the mountainous regions of Mindoro, a magnificent creature dwells. Upon first glance, it could be mistaken as a carabao, but look closer and you’ll notice how its horns are a different shape, how it’s a tad less bulky and bit more gray, and how it canters off into hiding when it detects human presence.

This creature is called the Tamaraw.

Found exclusively in the Philippines, particularly in the island of Mindoro, this elusive creature is the only endemic bovine in the country. Although fossil evidences suggest that it was once widespread in the archipelago, the tamaraw is now considered critically endangered.

It was estimated that the tamaraw population in Mindoro used to number in the thousands. As per the recent counting in April 2018, there are only 523 individuals left in the wild. 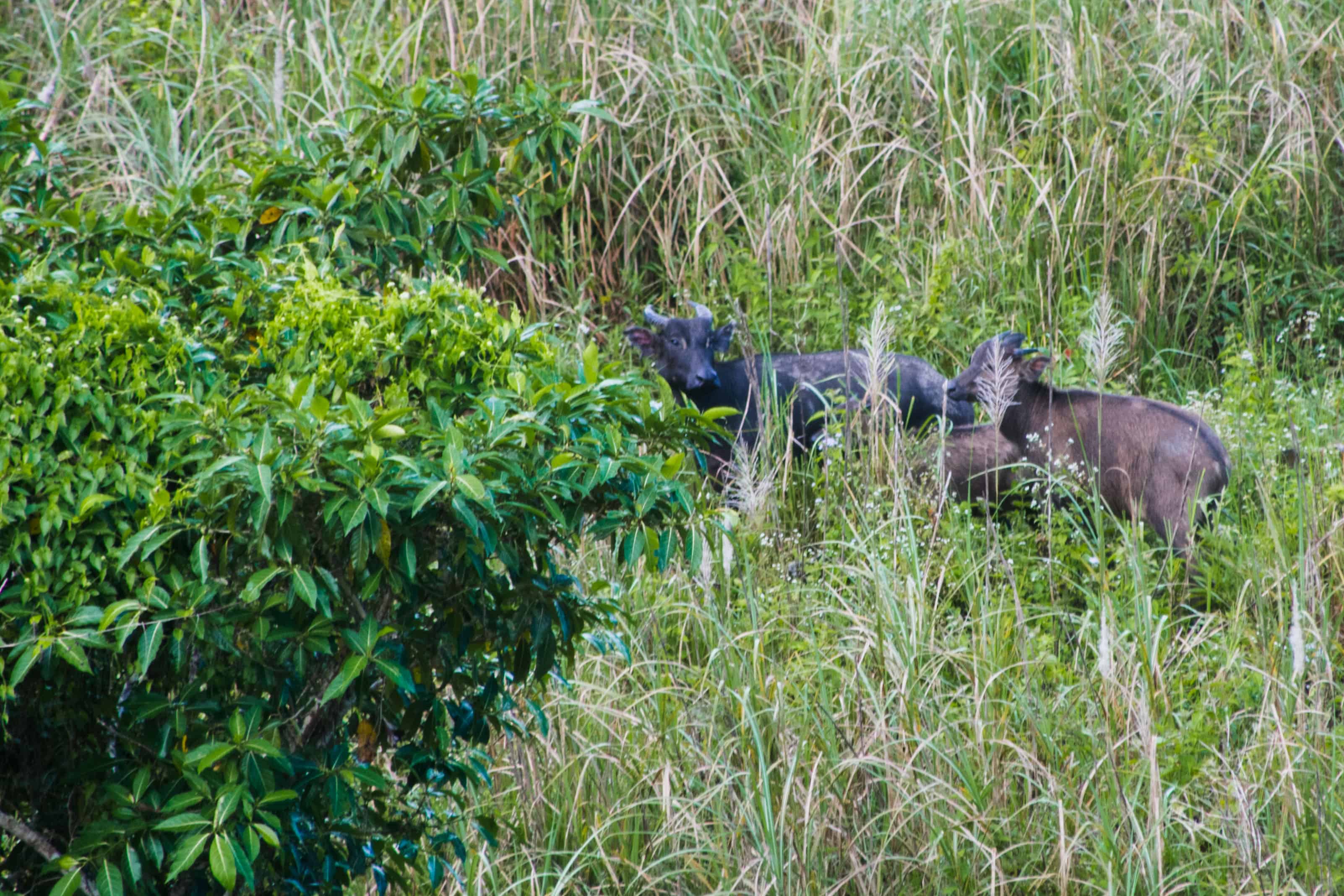 Many factors had led to the decline in the creature’s population. For instance, when non-native cattle was introduced in Mindoro in the 1930s, an outbreak of rinderpest took a huge chunk of the tamaraw’s numbers. The animal is also traditionally hunted for food by the indigenous Mangyan people, and this practice had proven unsustainable. These, along with habitat loss, had restricted the tamaraws within the 75,445 hectares of Mts. Iglit-Baco National Park (MINBP).

The MIBNP, which is also an ASEAN Heritage Park, encompasses six municipalities: Sablayan, Calintaan, Rizal, and San Jose in Occidental Mindoro, and Bongabong and Mansalay in Oriental Mindoro. Spines of mountains, a total of eight river systems, plateaus, and valleys make up the raw and rugged terrain of the park, and it is here where the tamaraws remain largely undisturbed and free to roam.

Making this possible are the rangers and wardens of the Tamaraw Conservation Program (TCP).

In response to the pressing need to conserve the tamaraw population, the TCP was established in 1979 by virtue of Executive Order No. 544. The program also started an off-site breeding facility in the form of the Tamaraw Gene Pool. But this breeding attempt was largely unsuccessful – out of the 20 captured heads, only one had survived. Kali, short for “Kalikasan Bagong Sibol”, was born in captivity in 1999 and remains as the only one to be so.

The Gene Pool will not go to waste, however, as the facility will be converted into the Mindoro Biodiversity Conservation, Research, and Education Center.

The main focus of the TCP, at the moment, is protecting the largest remaining tamaraw population in MIBNP, ensuring that the creatures continue to thrive in the wild. This task is not at all without challenge.

For one, the Mangyans, who depend on the park for sustenance, continue to hunt the tamaraw. This is a tricky case since their hunting, being a traditional practice, is protected under the Indigenous Peoples’ Rights Act. But through constant dialogues with the tribes, the TCP had managed to enjoin majority of the Mangyan in the conservation efforts, with some even taking on the role of Tamaraw Rangers. They have also managed to secure an agreement to set a hunting season every July to December as well as designated hunting areas.

Good news as these may sound, the hunting stipulations resulted into another issue. The tamaraws, possessing incredible intelligence, recognized the areas where hunting is allowed, and soon started moving further inland. Moreover, while these creatures commonly graze on grasslands – their favorite being the expansive valley dubbed as the “Tamaraw Plaza” – they’ve also adapted to feed on vegetation in secondary forests because of the “manmade restrictions” on their territory. This made the creatures even harder to monitor.

But more than the issue of hunting, what puts the tamaraw at even more risk is the uncertainty that surrounds the future of the TCP.

Lately, the TCP has been treading on a very tight string, operating on meager means and equipment (or lack thereof). To say that the agency has been running on pure dedication alone is accurate.

Manpower is lacking, with only 26 rangers and six wardens patrolling the whole MIBNP, risking life and limb to ensure that no poaching or any other illegal activity takes place in the park. This tiny manpower only allows them to cover 2,500 hectares of the park, and that’s already stretching them too thin.

Their equipment are outdated to boot. A couple of old binoculars. Not a single GPS device. Not even one spotting scope. They make do with a worn-out point-and-shoot to capture integral images, and a lone bulky desktop – already deemed unserviceable – for record-keeping. And while it’s true that dedication trumps dearth, that the rangers need no scopes to tell a boulder from a bull, that a GPS is no match for their innate knowledge of the landscape, these tools are essential for maintaining a reliable and valid database.

Furthermore, for such a hazardous job, majority of the rangers and wardens don’t have health and life insurances. WWF grants a one-year accident insurance via Red Cross, but for only 20 people – how about the others?

Ms. June Pineda-David, TCP coordinator, goes out of her way to give what is due to the rangers and wardens. She finds ways to provide them with uniforms and proper hiking bags, sometimes shelling out cash from her own pocket. She says it’s the least she could do – the rangers must be empowered to continue fulfilling their duties.

With limited funds, they rely on other agencies like BIOFIN (Biodiversity Finance), the D’Aboville Foundation, and even private individuals for support. Ms. June shares she’s acquired a deal with a native Mindoreño who’s now a jeweler overseas for a tamaraw-inspired collection, a portion of the sales of which will be donated to the TCP. Meanwhile, the men with the designation of “warden” are granted a three-thousand-peso allowance for an 11-day duty by the D’Aboville Foundation.

As if this wasn’t enough of a burden, the looming budget cut in the coming year, gives June and the rest of the TCP little hope. They wonder if the steady increase in the tamaraw population (the recent count – 523 – being the largest ever recorded) is not enough to warrant them better working conditions and more funding. They fear, that along with the slash in their fund, the years of conservation efforts will be undone.

These men and women sacrifice their time with their own family to help save the tamaraw – our heritage. They risk their safety and health. The least we could do is to not make their jobs any more harder.

Fortunately, there are several ways we can help the TCP – and, in turn, the tamaraws.

Three Ways to Help the Tamaraw and the TCP

The midterm elections are coming up and this is the best time to lobby our causes to politicians. Know more about the Tamaraw and the TCP by liking this page (DENR – Tamaraw Conservation Program). And then help spread awareness. Share this post. Tag politicians. Tag your friends. Engage in discussions.

There are so many big brands who are willing to support conservation efforts like the TCP but the thing is we sometimes don’t know who to talk to. If you think your company or employer would like to help, or you know someone who could link the TCP to brands, please do not hesitate to get in touch. This would mean so much.

The TCP is in dire need of tools like binoculars, a heavy duty camera, spotting scopes, GPS devices, and hiking gear. They also need basic supplies in the ranger stations like rice and canned goods. Financial subsidies for health and life insurances as well as for the rangers and warden’s SSS contributions (their positions are just Job Orders) are also appreciated. If you or your organization would like to help in these areas, send an email to the TCP via Ms. Angie Ogena at angelique.ogena@undp.org.

Conserve the Tamaraw, Conserve our Heritage

The Tamaraw, perhaps the most appropriate symbol for our nation’s pride, should be celebrated and protected at all cost. It’s one of the few things we could truly call our own: you can find it nowhere else in the world but in the Philippines! We must ensure that they remain for the next generations. We must ensure that our heritage continues to live on.

By helping the Tamaraw Conservation Program, we are helping save the noble Tamaraw. Will you join us in the #HatawParaSaTamaraw?

Celine Murillo
Blogger at Celineism
Celine is a thrill-seeking, tree-hugging, moon-worshipping, tea-chugging storyteller. She's obsessed with trees as much as with words and adventure, and dreams of planting her personal forest someday.

Hello, thank you for writing this article about saving the tamaraw. It’s quite informative. May I use one of the photos for my social media posts? I created a painting of critically-endangered animals that are endemic to the Philippines (most of which aren’t widely known) to spread awareness. I believe it would be helpful as a visual guide to the readers.