Our first day at Anawangin Cove was totally lovely. But the meat of our trip really was the “leaving the cove” part! Murphy seemed to have hopped onto the boat with us. Murphy’s Law was just at work that day, proving just how poor a traveler I was!

On the way to check out nearby Capones and Camara Islands, our boat’s engine just stopped. “That’s nasty,” I thought. But since I was with three of my bubbly friends, we were probably the coolest, most relaxed people ever to get stranded in the middle of the sea. We were laughing, making fun of the fact that sun is turning us into charcoals, and dismissing the probability of the boat toppling.

It wasn’t really scary. First, we had a life vest on. Second, it’s not like we were in the Pacific; the nearest land was still just yards away. Lastly, boats come passing by every minute. We were good. We love misadventures. The only thing we were worried about was our gadgets — cameras, iPods, cellphones.

Our boatmen were still trying to fix the engine and they really weren’t interested in giving up so we told them, maybe it’s time to have our boat towed. We’d been floating for 15 minutes and the waves got stronger. Not to mention it was 12 freakin’ noon.

So we started waving at other passenger boats. But the passengers just waived back at us. LOL. 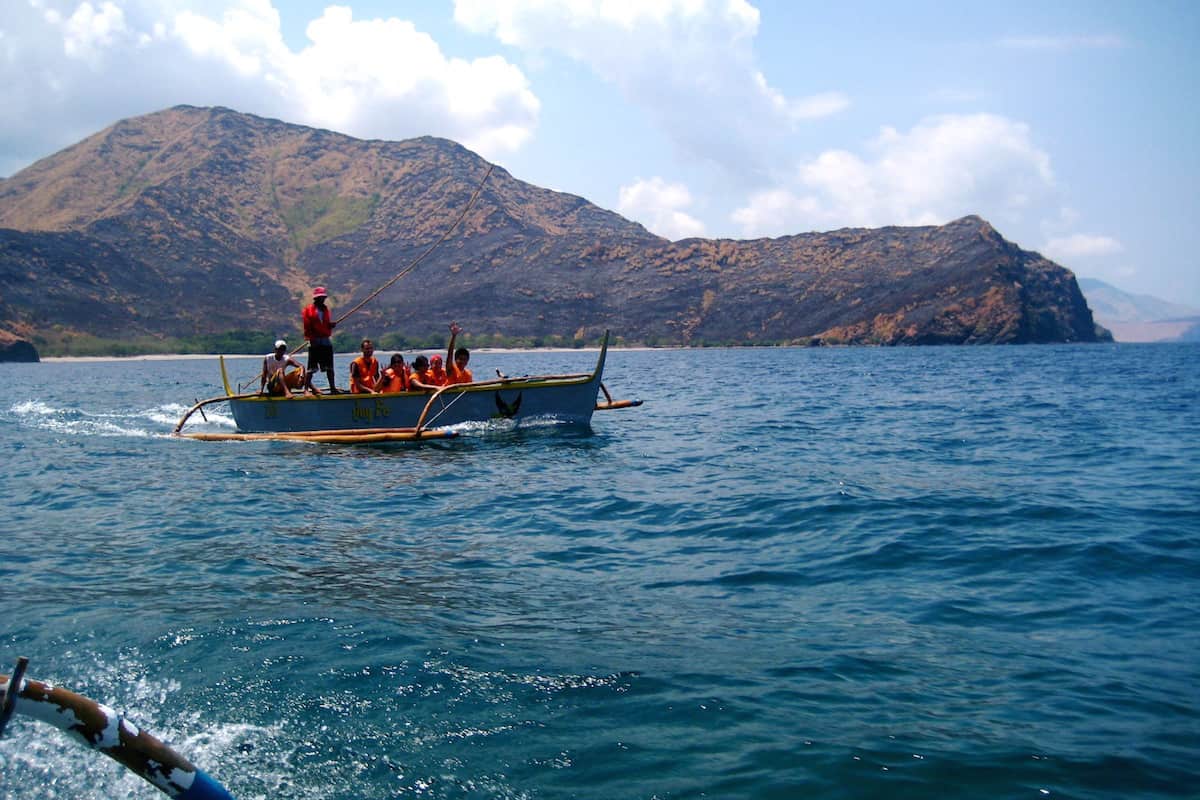 None of the other boats gave a damn. They just passed by us, not realizing we were having some wet troubles. Our boat floated aimlessly for another 30 minutes or so. FINALLY, a boat approached and its boatman offered to drag us along. We’d never been happier. But just as they were tying the boats together, the engine suddenly started. Woohoo! It was working again. Our boatmen decided to just continue with our journey. But just when the other boat left, the engine died again.

So now, we had more problems. We were farther from the shore, the waves were stronger and the sun was brighter. It didn’t help that our boatmen were a little too proud, they weren’t happy asking help from others. (But I love our boatmen, they were kind, nice people.)

After another 10 minutes,  the rest of our group (our friends) finally passed by. (We decided beforehand that half of the group would go ahead coz they were not done with the tents yet.) They waved at us and seemed to be clueless of the predicament we were in. They even shouted, “Take a picture of us.” And I was like, “Err… OK sure.” There we were trying to balance our boat for our lives and they had the nerve to ask us to take a picture of their vain asses. My friends, you’ll never find other people like ’em.

I told myself, “Damn I should stop smiling! They all think we’re not in trouble.”

And then they might have finally realized why in the hell would we fake getting stuck in the middle of the ocean. So they offered to tow us. Just when they were about to throw the rope, the fuckin’ deceiving engine started to work again. Wow. So they did not push through with the towing. The other boat drove away. We were okay. Until  the engine stopped again.

One boat passed by and the boatman on it said that there were two boats back where he was that flipped upside down because of the waves. I was like, “Thank you, mister. That made us feel better.”

The boatmen restarted the engine and it worked again. So there we were, finally moving. Yay! Everyone happy. 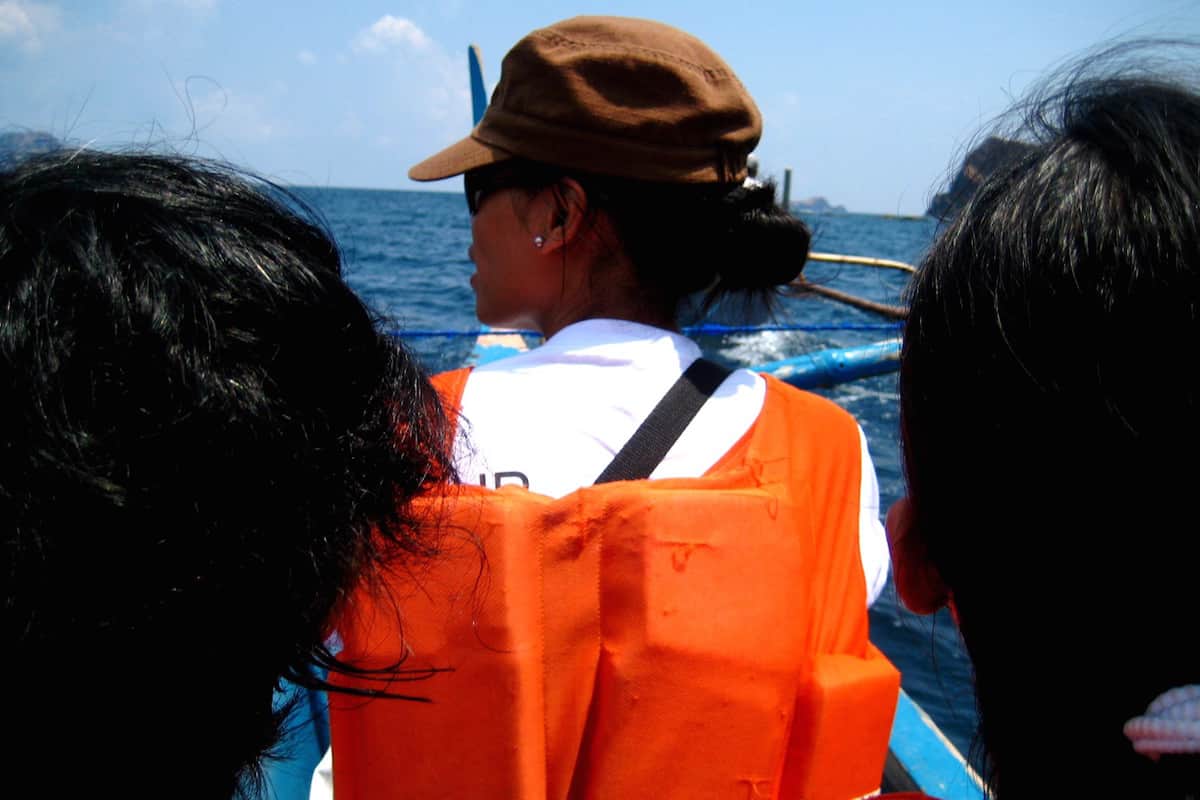 However, we realized we were heading to this rock islet. I thought, “Maybe we’re stopping over. That would be nice. Maybe our boatmen could really fix our boat’s engine here. And I’d rather get stuck on a rock than on a boat.”

But our boat was not slowing down. When I heard one of our boatmen shrieked, “Shet, shet, shet.” I knew something wasn’t right. Apparently, they couldn’t steer the boat. It was the first time I got scared the whole while — our boat crashing into this rock.

The boatmen turned the engine off and we went a little slower but not slow enough. We crashed into the islet. Good thing the rock’s shape was boat-friendly. Our boat was not damaged.

We were really scared but it was AWESOME! Loved the adrenaline rush! We ended up laughing it off. We stayed at the islet with our boatmen trying to make the engine work again.

After a few minutes of so, our friends’ boat came approaching us. Apparently they saw what just happened. Right then, we talked to our boatmen and convinced them to just give the fuck up and let our boat get towed. They obliged.

After about an hour in the sea under the high noon sun, we reached the shore alive but a lot more “tanned” than we intended.

It was really fun and unforgettable. After all, it’s not every day that we float helplessly in the sea and crash our boat into a huge rock. Not that I want that to happen again.

One thing is for sure though: Because we missed Camara and Capones Islands, we will be back!

“…we reached the shore alive but a lot more “tanned” than we intended.” LOL.

misadventures make for the best stories. glad to hear everything worked out for you, somehow. I’ve been to Anawangin too (with awesome friends as well) and I loved every moment. reading this makes me want to come back. I felt so at home there.

The Poor Traveler
Reply to  Naomi

Haha. Thanks, Naomi. Glad you enjoyed the post! I’ve also been planning to return to Anawangin soon. Maybe this year!

If I’d hear that from my boatman I’d surely wet my pants. :)

Great adventure you had there. Thanks for sharing.

Thanks MJ! I was so scared, too. And I don’t want to go through that again, that’s for sure. Haha. But it was a riot.

Oh my! You all braved that boat huh. Glad you reached the islet safe and no one’s harmed although it scared the ______ out of you all. Great adventure!

[…] and Vins Carlos would know. These guys have been conned by taxi drivers, ditched at a wharf, and stranded in open water. Their vacations make great conversation starters, if not cautionary tales in some instances. […]