“Hey, look at this!” There she was, my friend Tonet, standing motionless before a gravestone; her eyes glued to the engraving. “It’s weird.”

“What is?” I walked towards her.

“Look.” Her finger led my eyes to two words in particular. Last seen.

Usually, a gravestone has two lines written below the name of the departed — the date the person was born and the date the person passed away. But instead of the typical Died, there was Last Seen taking its place. A few moments later, I found myself frozen next to her,  both of us not moving as we stared at the gravestone while our brains bled a gazillion thoughts.

“She didn’t die?” she wondered.

“I think she went missing and they didn’t find her?” I theorized.

If she really went missing and found her dead, wouldn’t it be easy to determine the approximate date of death? If she went missing and was never found, how come there’s a grave? Does that mean the family gave up their search, assumed she was already dead, and made a gravestone? After all, she was born in 1922 and was last seen in 2000. So there’s no body underneath this gravestone? Or maybe we were overanalyzing things? Maybe it was one of the traditions of the town? But this was the only stone with Last Seen that we found. Everything else had Died marked on it.

Since I learned about the word, my idea of a “cemetery” had always been very simple — a place where dead bodies are buried. But right in front of me was a big block of stone that smashed that definition. Here lies not the body of a person but a memory, buried in dirt, topped with a white stone.

Sagada’s town cemetery, part of the Mission Compound, is a relaxing and beautiful place. It was very unconventional for me. The heap of charcoal in front of each gravestone gave a new meaning to the word “chilly”. The cemetery lies on top of a hill, which is unusual. Our Guide explained that the wind becomes a buzzkill most of the time leaving candles with no use. Instead, they set up mini-bonfires before the grave using a kind of wood that burns easily. Fascinating.

It was December when we were there and our Guide described how the locals celebrate All Saints’ Day. The hill is well lit by gentle flames. Pillars of smoke kiss the fog looming overhead. Crowds gather in a place that is usually very quiet in ordinary days. Like all the other cemeteries in the country, this one, too, comes to life on All Saints’ Day.

It was one of those moments when we were just supposed to enjoy the place but there I was overthinking, “overreflecting.” What may look like ordinary tombstones to many became mirrors for both my friend Tonet and I. On the far side of the cemetery was the Veterans’ Tomb, where the bodies of those who served at World War II were buried. It made me wonder whether or not I had done anything in my life that was as significant. I could only imagine what they went through during the war. I could only imagine.

In one corner was another gravestone that caught our attention.

“When I was 12,” Tonet shared, “I had a crush on our church’s sacristan, and I was dreaming to be a sportscaster someday. This girl died when she was 12.”

The Veterans’ Tomb and this little girl’s grave made everything we complain about or worry about or whine so much about so, so trivial. Many times, when we dwell on life’s negativities, we tend to forget that we are still lucky for a having a relatively good life, or simply for being alive.

To most of us, the cemetery is a dead place. Death roams here. Death rules this space. But our brief visit to the beautiful Mission Compound Cemetery made us realize one thing — the opposite of life isn’t death. The opposite of life is the inability to leave a mark, to touch another life.

The cemetery is home to not just dead bodies six feet under but to memories. It is not death that makes people flock to graveyards. It is not death that makes us light candles — or bonfires — and keep their flames burning. It is these memories that make us do all that. And for as long as there are memories worth reliving and people reliving them, life — and its endless cycle of gaining, losing, searching, and moving on — never ceases. Yes, even in places where death lives. 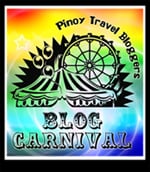 Flames and Mirrors at the Mission Compound Cemetery – Sagada is my very first entry to Pinoy Travel Bloggers’ Blog Carnival. This October’s Blog Carnival has the theme ‘Dark Tourism: Philippines in Focus’ and is hosted by Gael Hilotin of The Pinay Solo Backpacker.

Top Inns and Guesthouses in Sagada

Based on Agoda customer reviews.

Wow. I didn’t know you were one of the members of PTB. I remember reading your post about finding your childhood in Casa San Pablo and being really moved by your choice of words and photos. :) Great photos and creepy backstory for this Blog Carnival as well.

I really love this line: “The opposite of life is the inability to leave a mark, to touch another life.” :)

And to think that they burn pine wood too, I wonder how Undas in Sagada would smell like. :)

In Sagada, this is one of the most relaxing spot. Next to Echo Valley.

we were in sagada early this year but i wasn’t able to visit this place. may be next time…

By personal preference, I think this is the best entry for the carnival… Very well written, illustrated and this is an amazing discovery of yours, that grave is just out of the common.

Tales from the Dark Side of Travel in the Philippines

[…] cemetery is defined as a place where the dead are buried but in a moving tale of Flames and Mirrors at the Mission Compound Cemetery in Sagada, Mountain Province discover how Yoshke Dimen of The Poor Traveler  redefines the […]

Reading this blog makes me wanted to revisit Sagada again; just to take a second look of the cemetery.
On my first visit last year, I didn’t have enough time to really tour around this site.

correct…its not like what others think it is..but its the moment we do reminisce the days when they still live…

Its true.cemetery for me is a quiet place where u can relive the memories of the past.no longer there but the spirit is still there.a past that u cant longer hold on but u will forever remember.

Hi there! I was just wondering where’s the “summary and expenses” part. Hehehe..im planning to visit sagada next month and i would really appreciate the guide. Btw! It’s really moving, the blog!
More power!

The Poor Traveler
Reply to  afriendlessventure

Hi! Soon soon. I’m just trying to finish writing about all the other trips first before summarizing the Sagada trip. Sorry. :(

I really appreciated this post! You only not explore the beauty of Sagada but even the very sensitive part of their culture! I visited this place for 3 times but still crave to revisit everytime I read posts about Sagada or any other places of the mountain province. Because they’re really nature and treasure to our native land! More power to you “the poor traveller” and i keep following more of your posts.

You know for a fact that I have always been a fan of all your writings. And you have been a great influence on all my travels. I recently have visited Sagada and just like what I have expected, you were correct with all your descriptions on how beautiful Sagada is. Will definitely be back soon.