These days, with the ongoing enhanced community quarantine in Luzon, most of us are staying at home. All of us have been forced to stay home and only go out when truly necessary. But as someone who enjoys going out, seeing new places and seeking new experiences, the only kind of travel that I get to do these days is through the screen.

While our travel plans are canceled and making new plans are on hold, movies offer an entertaining form of escape. In a way, it’s like traveling at the comfort of our home. Lately, I’ve been looking for movies that feature our very own tourist destinations and realized that most are available on iWant, an Internet streaming platform packed with local movies, ABS-CBN TV shows, and original productions.

Here are 12 of what I found on iWant!

This box office hit that was initially released as an entry for Cinema One Originals Film Festival. But when it was distributed by Star Cinema as their Valentine offering, it became a cultural phenomenon, becoming the top-grossing independent film in history at the time. It also sent “hugot lines” to our collective consciousness and catapulted director Antoinette Jadaone to mainstream success.

Its theme song, Whitney Houston’s “Where do broken hearts go?”, encapsulates the story as Mace and Anthony, portrayed by Angelica Panganiban and JM de Guzman, go from Rome to Manila to Baguio and finally, Sagada on a whim. One of the most iconic scenes is when they wait for the sunrise at Mt. Kiltepan and then scream their hearts out to the magnificent view of the sea of clouds.

Don’t Give Up On Us

Not a lot of people know this, but Don’t Give Up on Us is one of Antoinette Jadaone’s inspirations for That Thing Called Tadhana. Directed by Bb. Joyce Bernal, it also showcases the beauty of the Cordillera region as the love story unfolds. It stars Judy Ann Santos as Abby, a city girl who decides to go to Baguio to find her best friend after running away before her wedding. In her quest, she meets Vins, played by Piolo Pascual, whom she convinced to help her. Their journey takes them to some marvelous spots in Baguio, Banaue, and Sagada.

This Claudine Barretto and Aga Muhlach classic was shot in the Bicol region. Kailangan Kita is a love story between a US-based chef who returns to the Philippines to arrange his wedding but finds himself slowly but surely falling for her fiance’s sister.

The story alone is quite compelling, but another element that makes this movie so beautiful to watch is how it perfectly captures the natural scenery of Albay, with the Mayon Volcano getting its beauty shots every now and then. It also highlights the region’s rich and vibrant cuisine, a great parallel to the complex and spicy romance that blossoms beautifully in the film.

Also helmed by Antoinette Jadaone, You’re My Boss is a romantic comedy starring Coco Martin and Toni Gonzaga revolves around a no-nonsense airline company executive who is willing to do everything to keep her job even if it means forcing her humble assistant to pretend as the boss.

It was released on the Black Saturday of 2015, a visual treat for the summer as it films the captivating wonders of the province of Batanes, where the love story reaches its peak. The natural beauty of its landscapes gives a refreshing, stark contrast to the usual office setting, where the big fraction of the movie was set.

Siargao was the Metro Manila Film Festival entry in 2017 that bagged the most awards from the festival that year. It stars Erich Gonzales as a vlogger who wants to find herself after a break-up and Jericho Rosales as a musician who went back to his hometown to run away from the troubles he’s in.

The movie gives us a glimpse of what life is like in Siargao from surfing on Cloud 9, arts and music to the nightlife on the island.

Starring the unlikely but effective pair of Ryza Cenon and JC Santos, this movie is about Raffy and Gela who coincidentally share the same surname and met while on a vacation to get away from their current life problems. Their chosen place to run away to? Palawan, of course.

You will see the beauty of Puerto Princesa and El Nido as the characters go on a tour of this breathtaking destination.

A lot of people go some place else when they’re broken hearted, but if there’s a specific place where you could mend your broken heart, wouldn’t you want to go there instead? This is what Camp Sawi is, a summer camp of some sort especially built for those with troubled hearts. The camp was set in Santa Fe in Bantayan Island, a magnificent island in Cebu.

Everyday, I Love You

Everyda,y I Love You puts the spotlight on Silay and its nearby cities. Ethan and Audrey, the main characters portrayed by Enrique Gil and Liza Soberano, take viewers to the heritage spots in the city and eat delicacies like piaya and chicken inasal. Among the places they visited is the ancestral mansion in Talisay City known as The Ruins.

Love Me Again (Land Down Under)

Angel Locsin‘s first project with Star Cinema, Love Me Again tells the story of Arah, who decides to work in Australia for a better life for her family. Although Australia is a major setting, the first half of the movie focuses on Bukidnon and its cowboy culture.

Suddenly It’s Magic stars Thai actor Mario Maurer and Erich Gonzales as Marcus and Joey. The movie is about an actor who decides to go on a vacation in the Philippines to get away from the public eye. The two met in Ilocos, where Joey is from. Among the notable locations seen in the movie is the Paoay Church and Bangui windmills.

All You Need is Pag-ibig

All You Need is Pag-ibig is one of Star Cinema’s entries to the Metro Manila Film Festival in 2015. It is about the struggles and complexities of people with love and life. It features an all-star ensemble including Kris Aquino, Derek Ramsay, Jodi Sta. Maria and Ian Veneracion. But one of the key plots follows Anya and Dino, high school exes played by Kim Chiu and Xian Lim.

Anya and Dino’s cat-and-dog relationship takes an interesting turn on their trip to Coron, where the key scenes were shot. Most of the scenes in the island were filmed in Club Paradise Resort, but Kayangan Lake and Siete Pecados were also showcased.

Cover images courtesy of Star Cinema and Cinema One Originals 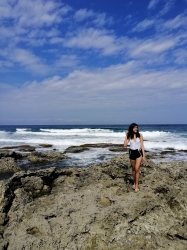