Batanes isn’t new to the local movie scene. Filmmakers attempting to capture its sheer and undeniably cinematic beauty have used the country’s northernmost province as setting for their treasured stories. The most notable of these are Hihintayin Kita sa Langit and Batanes, Sa Dulo ng Walang Hanggan.

The newest addition: Star Cinema’s summer offering “You’re My Boss.” While the majority of the sequences were set in the corporate world, the latter part was shot in Batanes, with its mesmerizing landscapes giving a stark contrast to the usual office setting. Starring Coco Martin and Toni Gonzaga, the film used Batan and Sabtang Islands as the places where the characters’ budding romance fully blossomed.

Disclosure: I co-wrote the film with its director, Antoinette Jadaone, so of course, I am promoting it. There are a few spoilers below so read at your own risk.

Anyway, here are the 10 destinations in Batanes where “You’re My Boss” was shot. 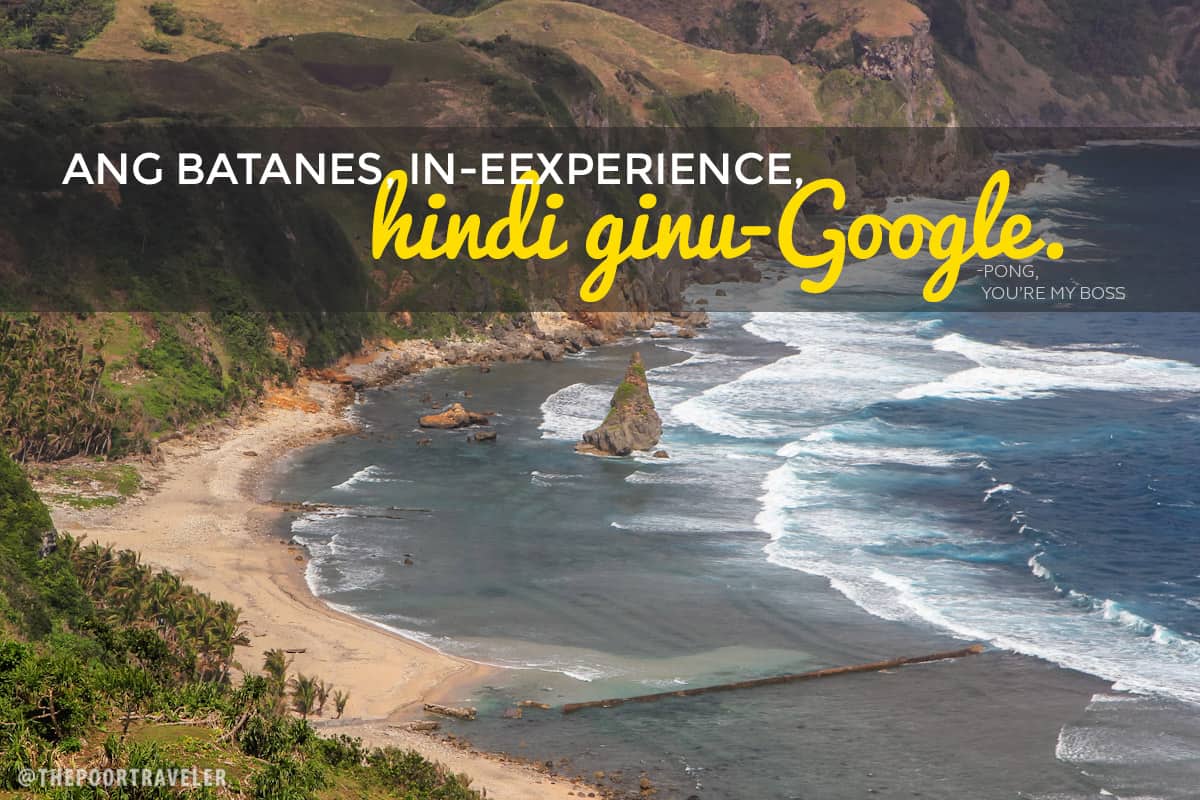 The film is about many things, but its biggest theme is HONESTY, making this humble coffee shop an important part of the film. 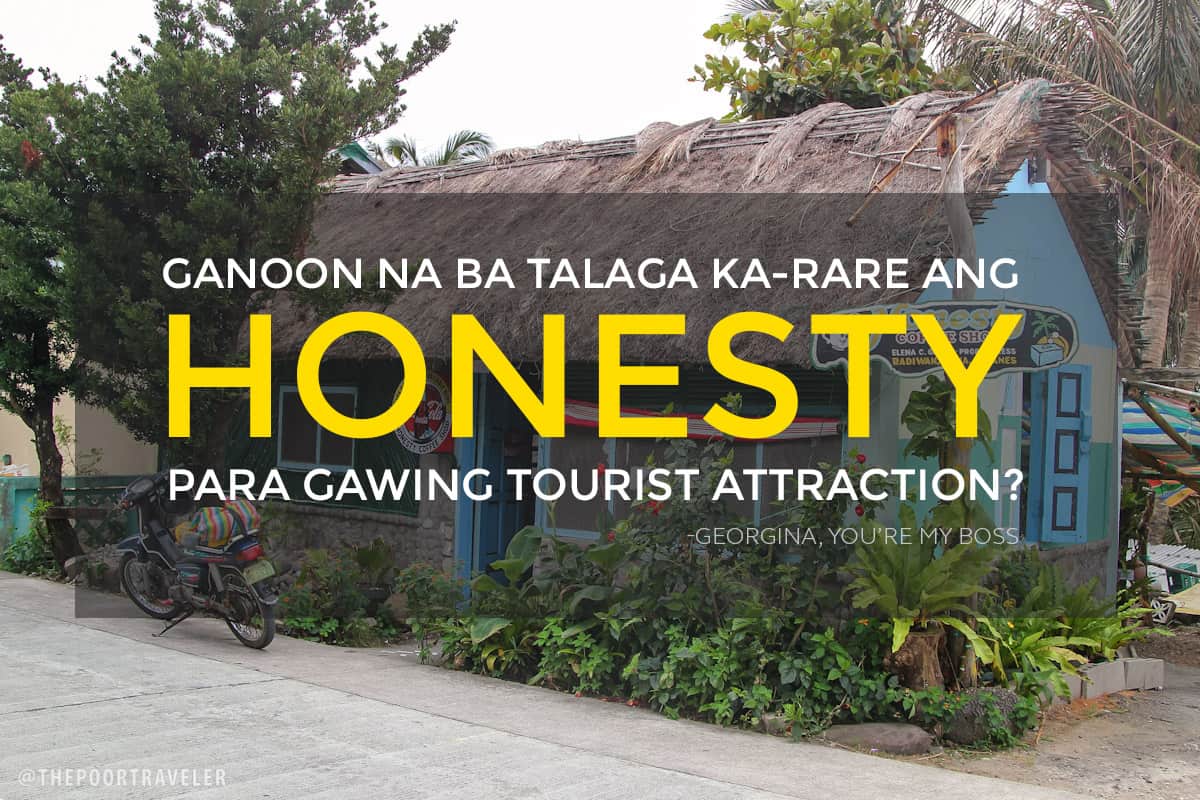 Unmanned and always open, the Honesty Shop is a sari-sari store and coffee shop that puts so much trust on its customers. You get what you want and drop your payment at designated boxes, a testament to the admirable values of the locals. The province boasts virtually ZERO crime rate.

Situated just next to the Honesty Store is Ivana Port, the takeoff point for people taking the boat to Sabtang Island, where Pong (Coco Martin) was born and raised.

There was one aerial shot of this side of Sabtang Island, with the lighthouse dominating the landscape. 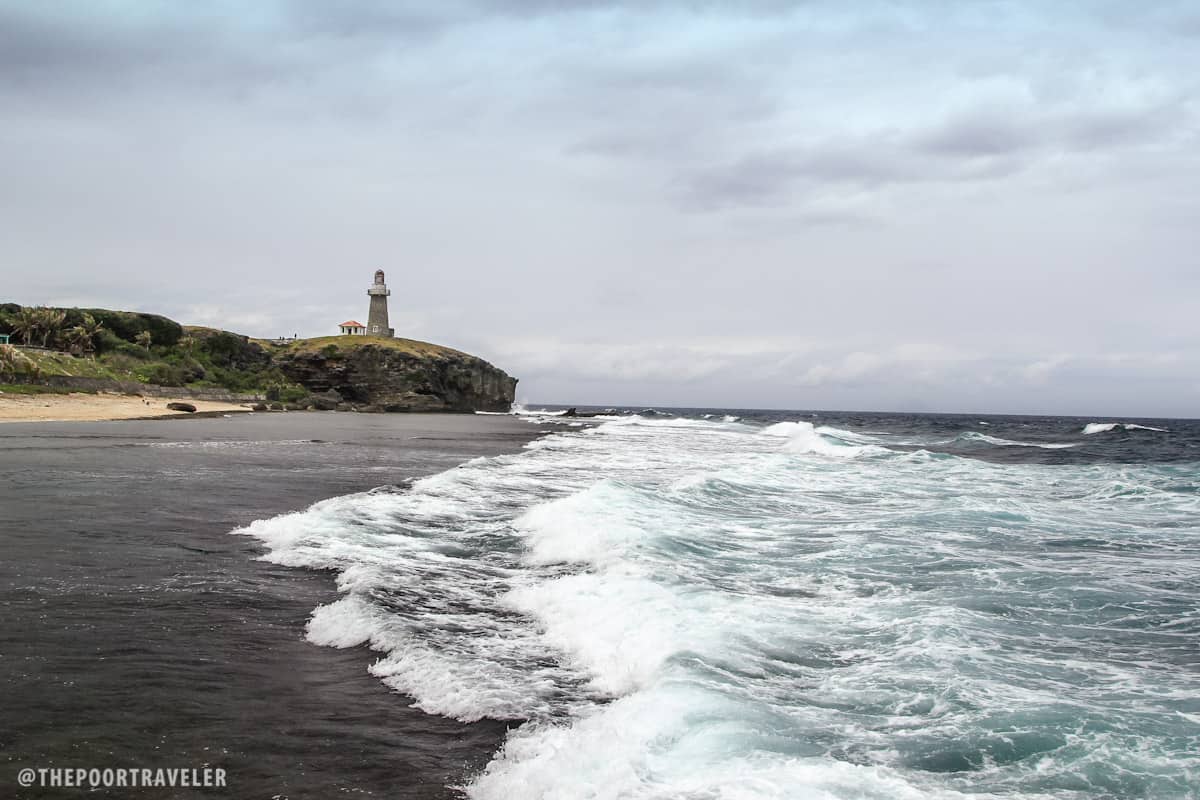 Where Georgina (Toni Gonzaga’s character) fully realized she has completely fallen in love with Batanes. (On my count, 1… 2… 3….) 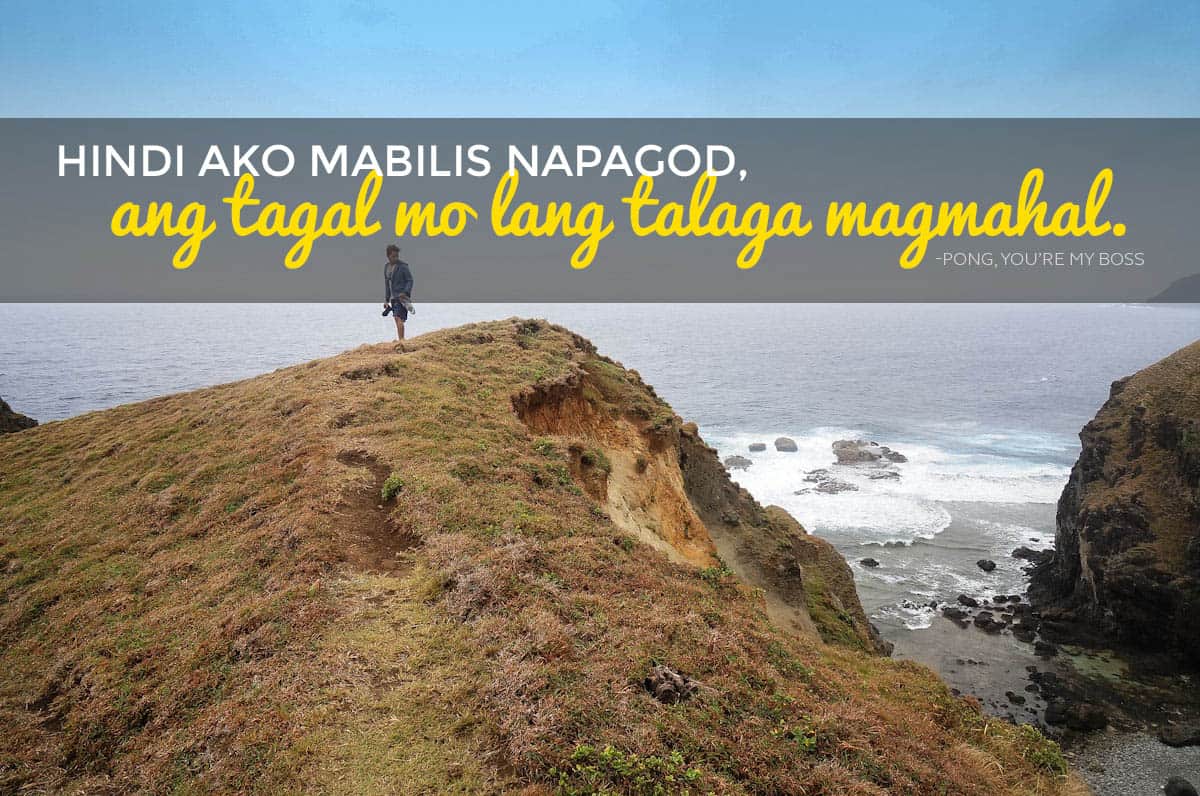 A foot trail takes visitors across rolling hills to a viewing area. Rocky cliffs rising from the slopes of the hills, creating natural frames for the fantastic vista of Chamantad Cove below.

That scene where Pong and Georgina were taking lots of selfies as the day was coming to a close — it’s here! 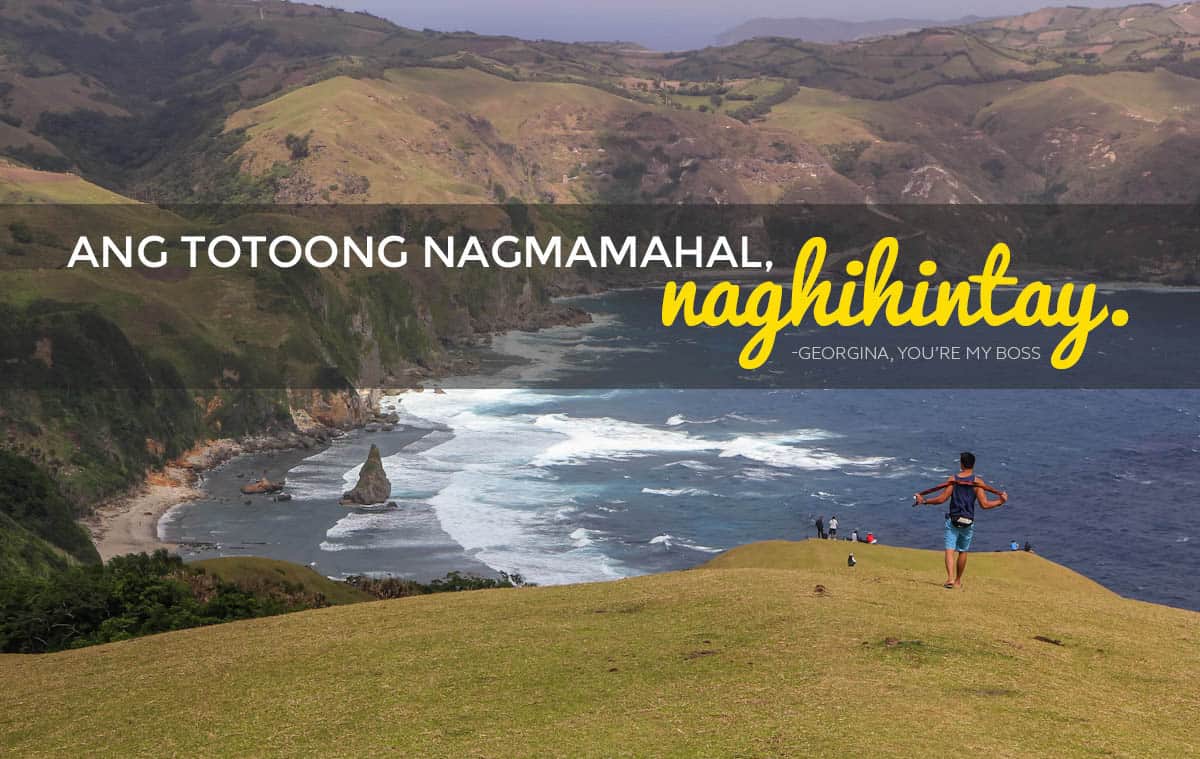 It is one of those places where you can just sit, relax, and wallow in the utter peace and beauty before you. Pick a hillcrest and you’ll have the most picture-perfect view of the Tayid Lighthouse to the left, Mt. Iraya to the right, and Diura Beach in between. Absolutely stunning. 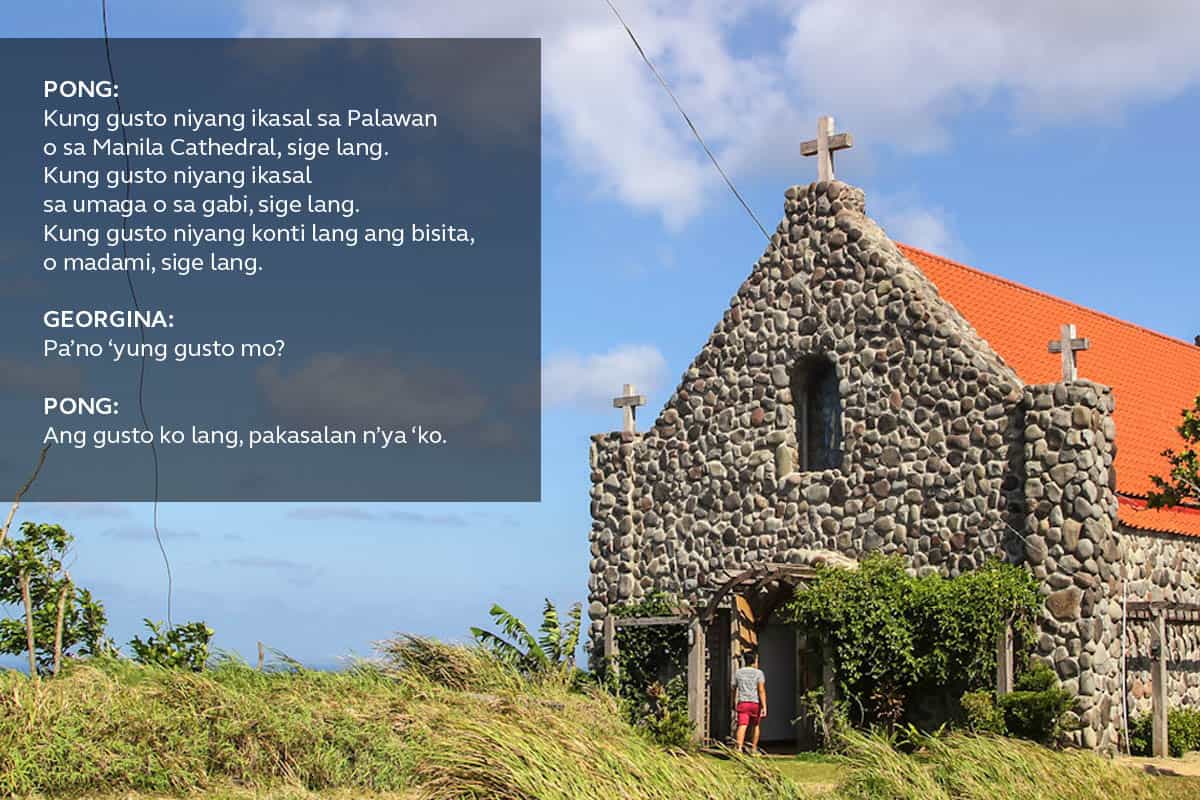 Boulders make up the church’s walls, interrupted only by carved wooden doors and stained glass windows. Inside, hand-painted images of the province’s patron saints, one for each municipality, wrap its ceiling.

Where Pong and Georgina stayed. The script originally called for Fundacion Pacita but it was unavailable on the dates of the shoot.

Motorcycle scene. This is also the iconic setting of one of the most unforgettable scenes in Hihintayin Kita sa Langit.

Where Pong’s grandparents live. One narrow street weaves the small settlement, lined with sinadumparan stone houses. A tiny chapel and a house mark the end of the concrete road and the start of the sandy shore.

That sweet sunrise scene was shot here. One corner lodged tataya boats, waiting for another fishing session. The sand here is far from fine but mixed with shingles and small pebbles. The waves, ferocious as usual.

You’re My Boss is showing in more than 170 theaters nationwide.

A MUST for every filipino to visit! Truly SUPER AWESOME! I will make sure i will be going back.

soon very soon, I’ll experience Batanes.. But never EVER fly with SKYJET, I have mixed emotions while watching this movie, I can’t help myself not to make side comments with SKYJET, but I’m a big fan of Coco so I’m trying my best to enjoy the movie..I will watch this movie again promise, I hope by that time I already forgot whaT SKYJET did to me, my family and my clients :(

God, I want this! Move over, gorgeous Coco. Batanes, here I come!

I love the movie. But I love Batanes more :D

Hi Yoshke! where you staying in Bogarra? I with my wife in Hotel Val de Pinares photos attached

Stunning pictures Yoshke. Cute how you superimposed quotations from the film as well. I can’t wait to finally make our way to Batanes. Hopefully we can score some discounted tickets for early next year. :)

Btw, I read your travel guide. I’m glad you put in that bit about the coconut crabs. I didn’t realize before reading your post that they were threatened due to overharvesting. Kudos to you for pointing that out.

Usapang Pelikula: Movies that inspired us to explore the Philippines - SENYORITA.NET

[…] YOU’RE MY BOSS was co-written by fellow Pinoy Travel Blogger Yoshke Dimen of The Poor Traveler! […]