If it’s not obvious yet, Japan is our favorite destination in the world, bar none.

How many times have we visited Japan? We have lost count! But we have set foot in 28 Japanese prefectures. Japan has all the right qualities that can make a traveler fall madly in love in no time — from the rich history and well-preserved culture to the futuristic and sometimes quirky attractions to its globally revered cuisine to what could be the most polite people in the world! No wonder the number of foreign visitors grows tremendously year after year!

Japan may be expensive, but there are countless ways to keep your expenses low. In this post, we’re compiling our answers to some of the most frequently asked questions about Japan! Here are 20 of them!

1. What destinations in Japan are ideal for budget travelers?

Not all destinations in Japan are equal, especially if we’re talking about the cost of living and travel. Although Japan in general is on the pricey side of the spectrum compared to other countries in Asia, some cities and prefectures are less expensive than others.

Tokyo, the capital and the poster city of Japan, is indeed expensive even by global standards. Osaka and Nagoya also have high costs of living. But when you travel to Fukuoka and Hiroshima, you can easily feel the difference in the prices. 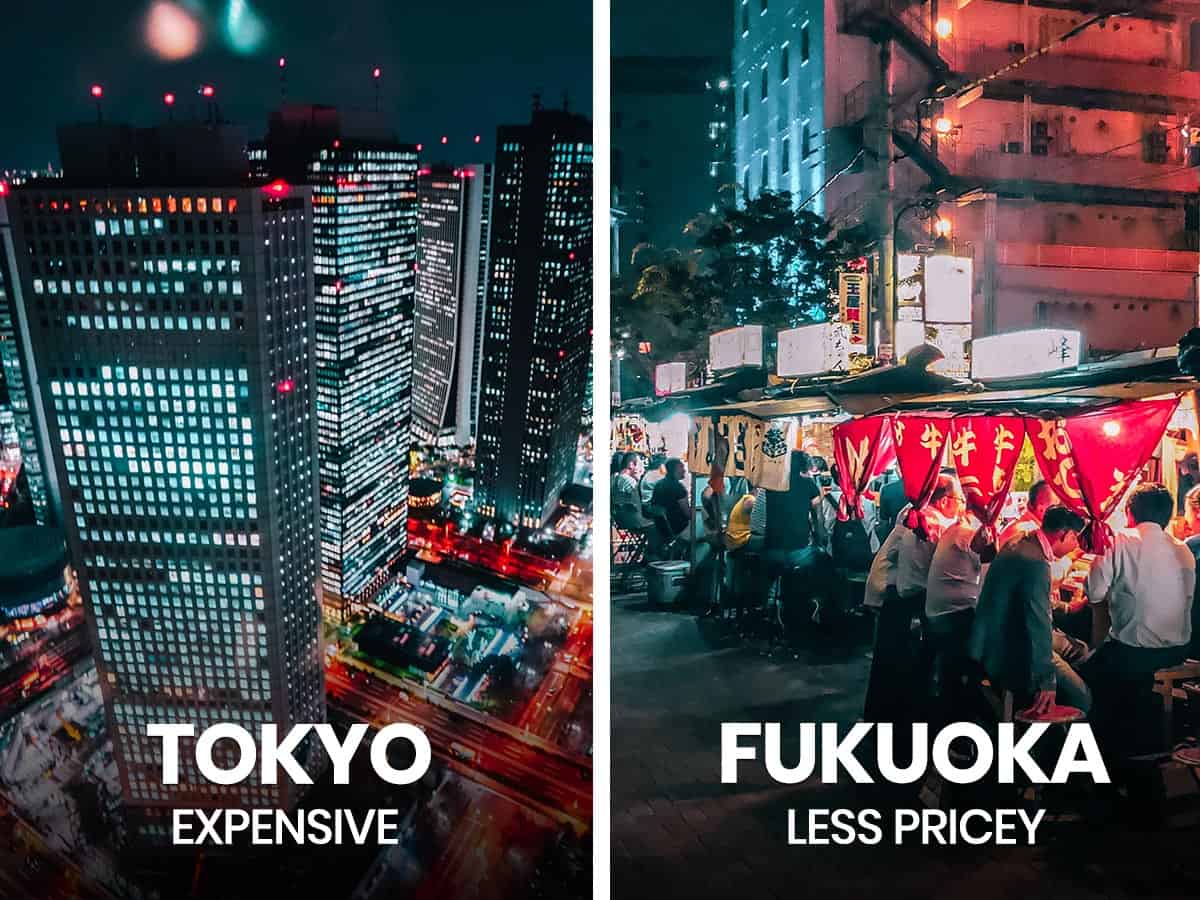 As you move away from the city centers, prices even go lower. Gifu in Central Japan and Saga in Kyushu Island are two of the most budget-friendly destinations. Tottori is also relatively cheap.

2. When is the best time to travel to Japan?

What’s best depends on what you want to experience. Every season has its own perks — cherry blossoms in spring, fiery colors in autumn, festivals in summer, lower costs in winter.

But if you ask me, I prefer spring and autumn. 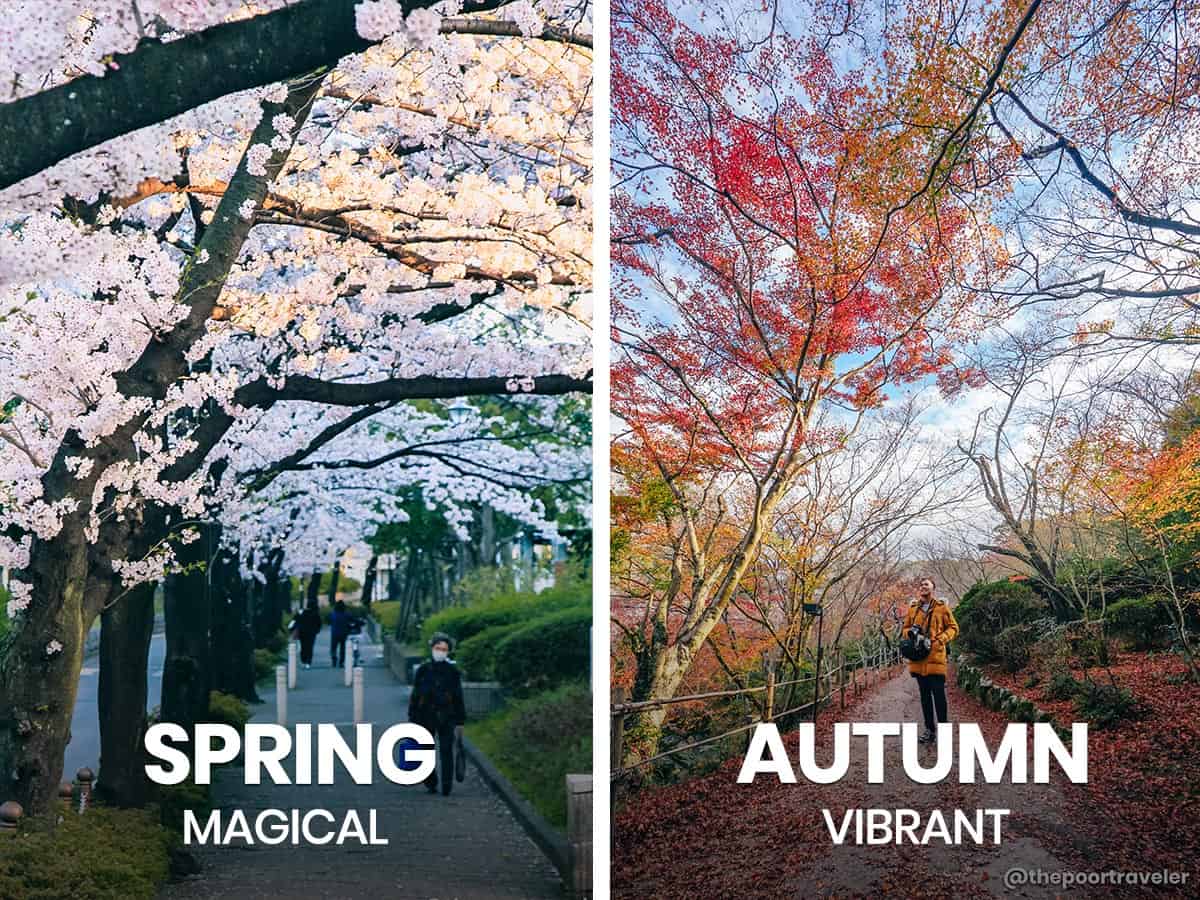 For an island guy like me, I am also fascinated by winter. We don’t have snow where I’m from, so I find it magical. It comes with a lot of perks too. Flights and hotels are cheaper. Most attractions are not as crowded. Shopping districts go on NEW YEAR SALE (January Week 1), offering amazing deals.

For more tips on how to enjoy Japan in winter, READ: JAPAN WINTER TIPS!

These dates bring the biggest crowds and steepest prices.

Make sure you have the necessary documents to enter Japan. If you’re holding a Philippine passport, you need a visa. The posts below will help you get through the application process.

If you’re qualified, you can also request for a multiple entry visa, so you don’t have to apply and pay the visa fee each time you travel. Here’s HOW TO APPLY FOR A MULTIPLE ENTRY JAPAN VISA!

4. Where to book cheap flights to Japan?

The good news is, Japan is well-connected to several major cities in Southeast Asia.

If you’re coming from the Philippines, you can hop on a direct flight to Tokyo, Osaka, Nagoya, Fukuoka and even Okinawa and Sapporo. If you’re a budget traveler, you can simply wait for a seat sale.

Tip! Fukuoka and Nagoya are often covered by promos and usually have a lot of seats on sale.

5. What are budget-friendly lodging options in Japan?

Hotel accommodations in Japan are generally expensive, but there are cheaper options. 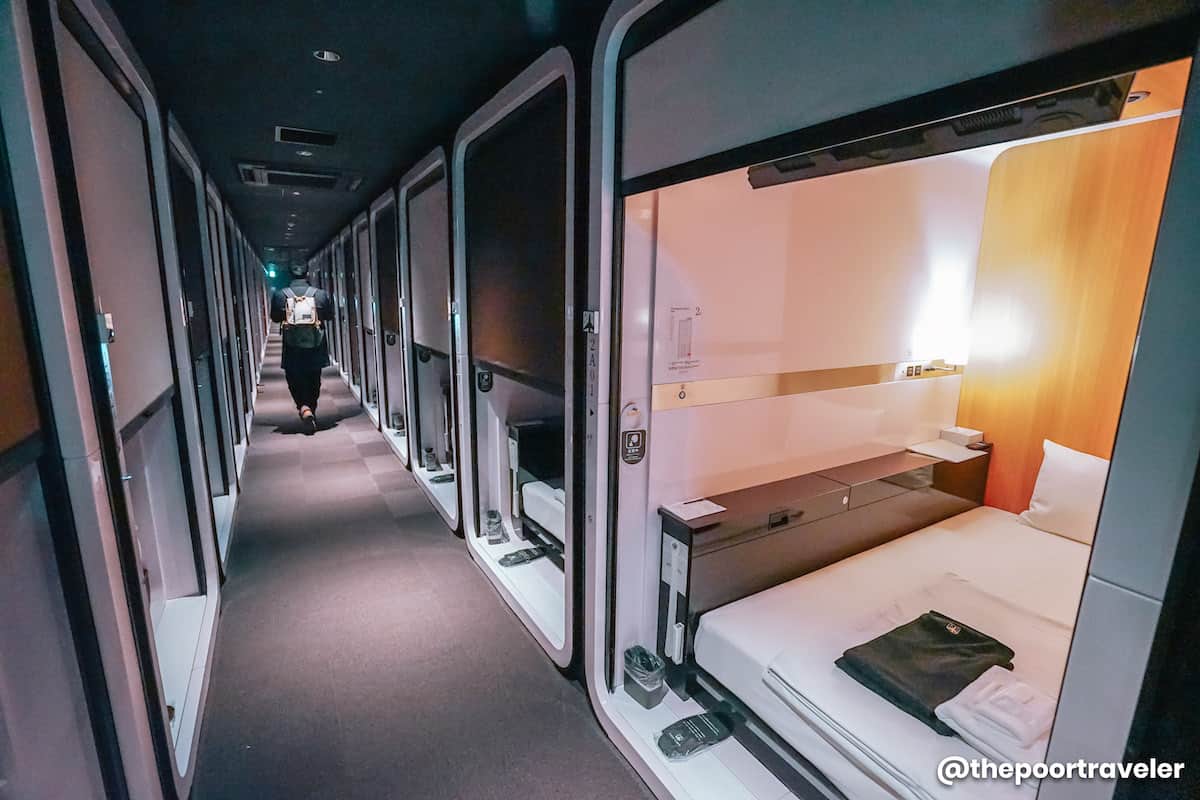 Another option is a budget hotel. In major cities like Osaka, Nagoya and Tokyo, economy rooms are often cramped. Just manage your expectations.

6. Which is the best: hotel, hostel or apartment (AirBnB)?

What’s best for you depends on your travel style and preferences.

Our primary considerations are the price, cleanliness and location more than the type of accommodation. If we find a well-reviewed, budget-friendly, and centrally located property, we will book it regardless of whether it’s a hostel, hotel or apartment.

We have tried staying at an apartment, a capsule hotel, a hostel, and a hotel in Japan. We have also tried a ryokan! I personally prefer staying at a hostel because I really enjoy the community spirit, but I wouldn’t mind spending the night elsewhere.

7. Where do you book cheap hotels, hostels or apartments in Japan?

We book accommodations on Agoda or Booking.com.

Both sites also offer FREE CANCELLATION with many properties.

We’re also part of their affiliate network! By booking with them through the following links, you’ll help keep this website FREE for all.

8. How do you choose where to stay in Japan?

Our top consideration is the price. That’s usually our first filter when searching online.

Aside from that, our primary concern is the location. We always try to find a place near the central train station so we have easy access not just to the train but also the buses. In many cities, buses also pickup and drop off at the main train station.

If we can’t find a place nearby, any train station not too far away is okay too. Most of the attractions in Japan are located near a train station anyway.

9. How much is your food budget?

To manage our food expenses, we try to keep our daily budget to ¥1000 per meal.

It’s actually a pretty big budget for a meal, but better to over-budget than under. In reality, we spend much less.

Although Japan’s restaurant scene can be intimidating at first, it’s easy to find a pocket-friendly resto even in expensive cities like Tokyo and Osaka. You can find ramen bars in residential areas that serve bowls for ¥500-800 apiece. There are also cheap izakaya and other eateries, although they are not that obvious to those who can’t read Japanese.

10. How do you keep food expenses low?

We don’t eat out at restaurants for every single meal. We give ourselves a ¥1000 per meal budget and we’re very flexible with it. It’s all about balance.

For example, if I spend ¥1500 at a restaurant for lunch, I’m left with only ¥500 for dinner. I’ll just hit the supermarket for something cheap that night. In the same way, if I decide to splurge and spend over ¥2000 on dinner one night, I avoid restaurants altogether the next day. 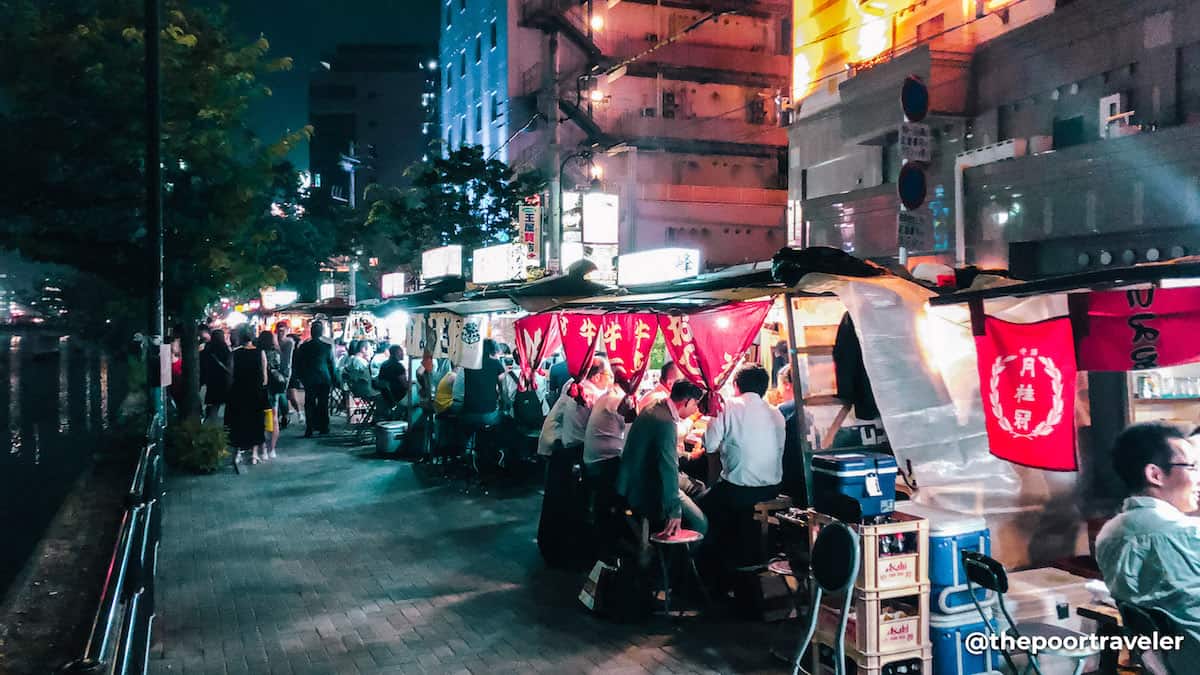 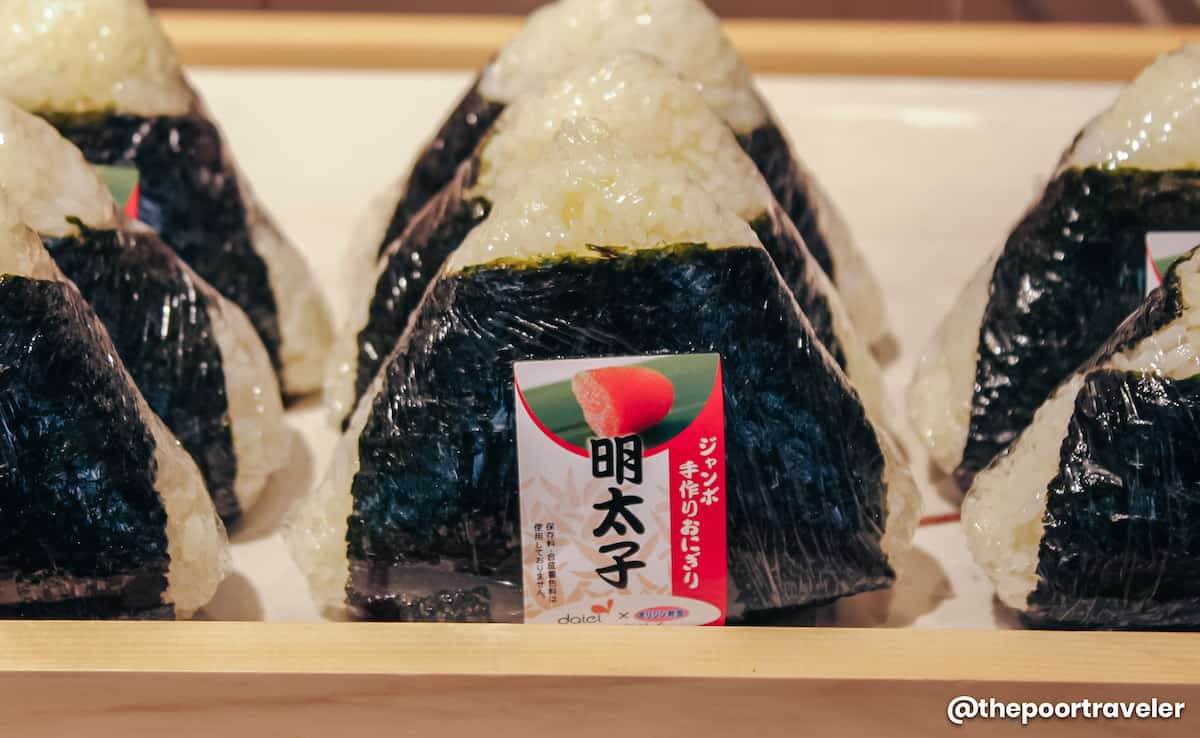 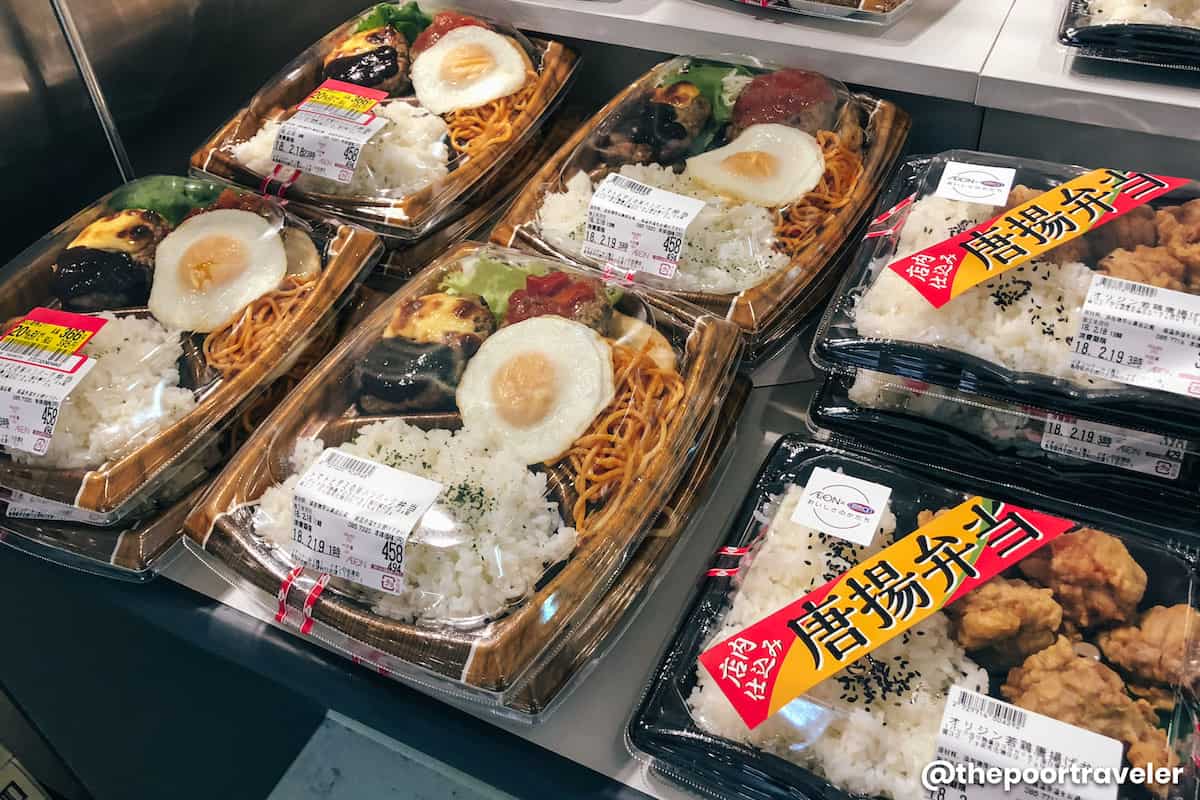 11. How to travel from one Japanese city to another on a budget?

There is no blanket answer to this because it depends on your specific route. 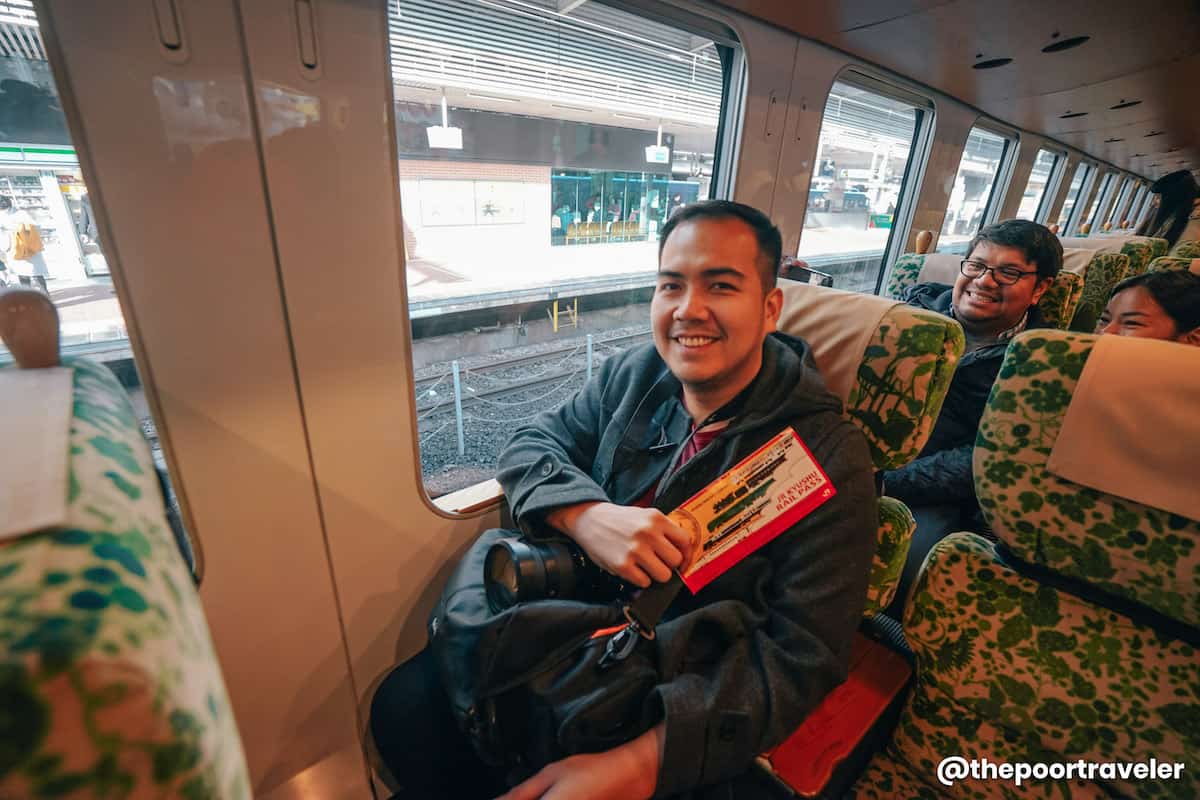 There are a lot of reliable transportation options in Japan.

As mentioned, what’s best depends on the route. Most tourists gravitate towards the train — especially the shinkansen — when traveling long distances. But the truth is, it’s NOT always the best choice.

For example, when I’m traveling between Tokyo and Osaka, I prefer booking an overnight bus. It’s not bad at all, and it allows me to save a hotel night.

When traveling between Sapporo and Tokyo/Osaka, I think the best way to go is to fly. Sapporo is just too far and will eat up an entire day if you’re traveling from Osaka/Tokyo. Domestic flights in Japan are usually much cheaper than a bullet train ride.

When traveling between Fukuoka and Hiroshima, the bus is also my choice. The train journey is too expensive, unless you have a JR Pass or JR Hiroshima-Yamaguchi Pass.

Only if your itinerary involves multiple long-distance train rides. 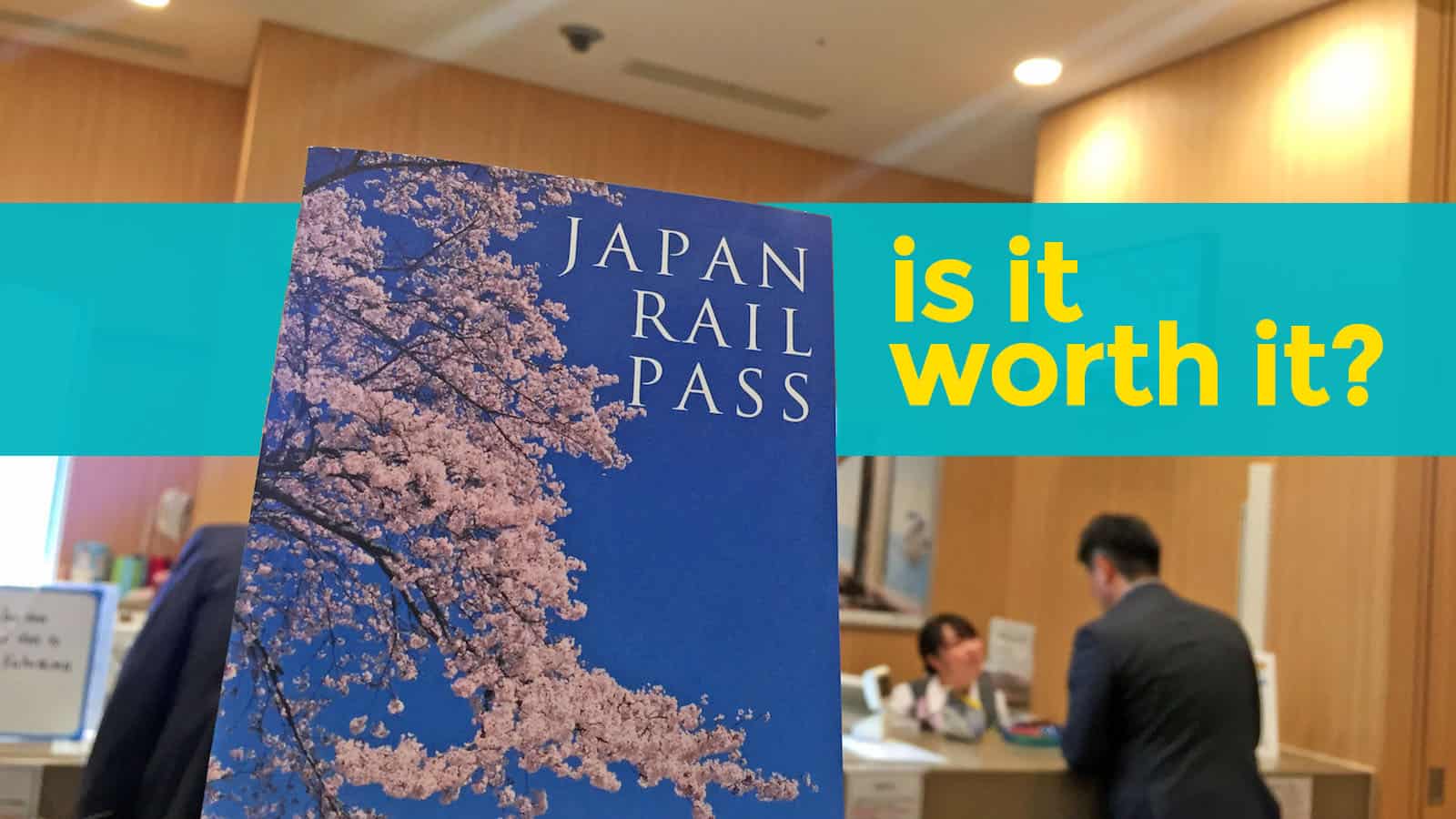 The JR Pass (Japan Rail Pass) is a ticket that grants you unlimited use of the JR long-distance train system across Japan. The term JR Pass usually refers to the “nationwide pass” or “Japan-wide pass”. If you have it, you won’t need to pay for individual ticket per journey. The keywords there are long distance.

If you plan to visit multiple cities that are far from each other — for example, Fukuoka to Osaka to Tokyo — then a JR Pass can mean BIG SAVINGS.

If you plan to visit only one city or two cities close to each other, you probably won’t need a JR Pass. You’re probably better off using another type of pass.

We explained it in detail here: IS THE JR PASS WORTH IT?

13. What Japan train passes do you recommend?

Again, that depends on your itinerary. 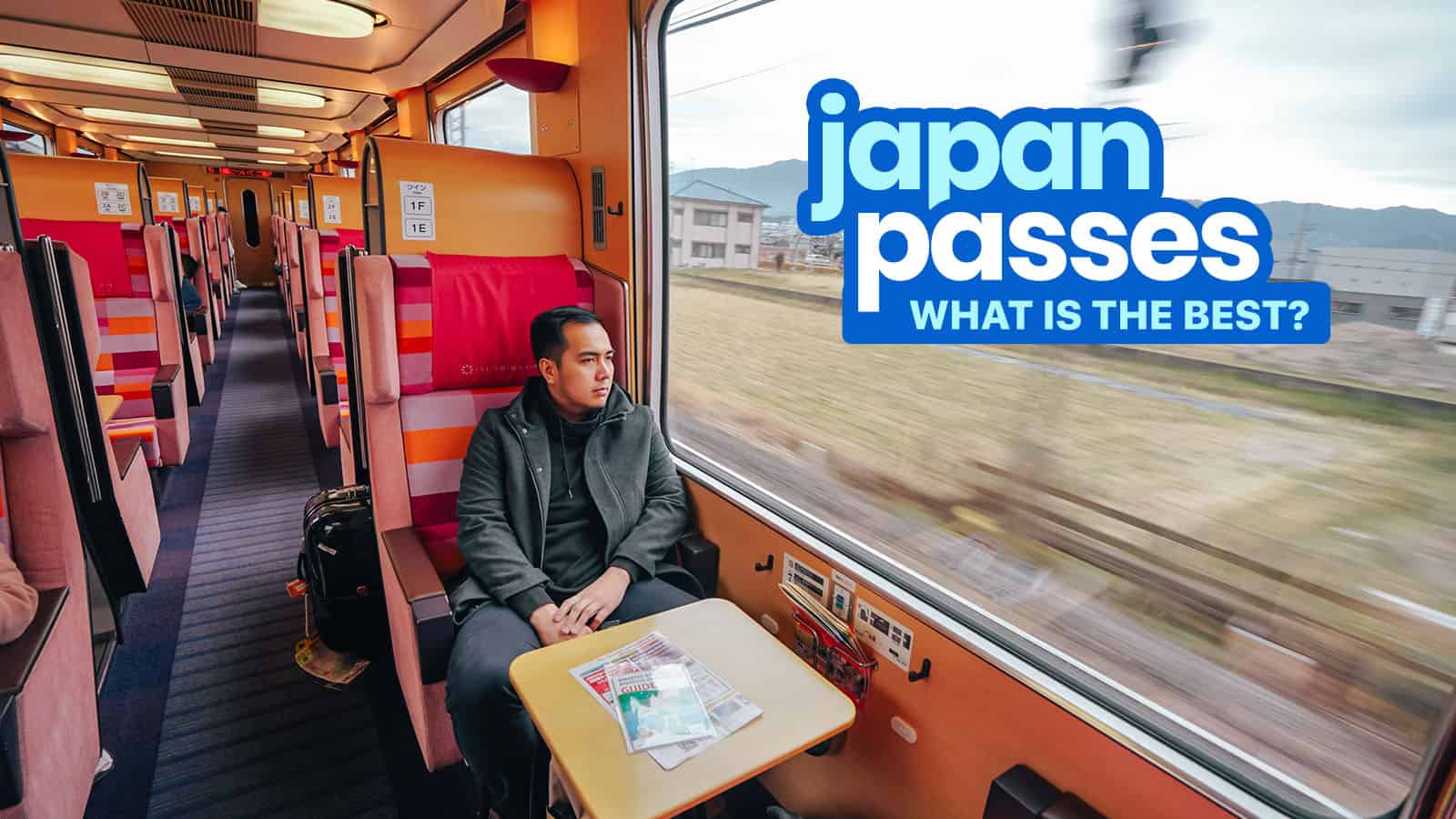 Japan offers visitors A LOT of transportation passes. Sometimes they can be confusing. There are city passes, prefectural passes, regional passes, cross-regional passes, and nationwide passes. The Kansai Region alone is caught in a flurry of dozens of beneficial passes offered by various companies.

We explained it in detail with some recommendations per itinerary in this post: WHAT IS THE BEST TRAIN PASS FOR YOUR JAPAN TRIP?

14. What are IC cards: PASMO, SUICA, ICOCA? What’s the difference?

These are stored-value, rechargeable cards that you can use to conveniently pass through the gates. ICOCA, PASMO and SUICA are all IC cards. They’re NOT unlimited. You’re still charged every time you use it, but you just bypass falling in line or purchasing tickets each time.

As far as function is concerned, there isn’t much difference between them, other than the company that issues them.

15. Can I use SUICA/PASMO in Osaka? Can I use ICOCA in Tokyo?

You can try checking Willer Express, a budget bus operator, if they ply your desired route. If not, check Klook too because they also sell intercity bus tickets for select routes.

If you’re not traveling during peak season (Golden Week or New Year), try showing up at the terminal.

17. Where to buy souvenirs and pasalubong in Japan?

Discount stores in Japan are everywhere. You’ll find 100-yen shops, also called hyaku en shoppu. They sell all sorts of products, from souvenirs to snacks to household items to school supplies! Prices usually start at 100 yen but the taxes are not yet included. Some items cost higher, but they are still good buys. DAISO is also a popular value store.

One of my favorite shops is DON QUIJOTE, a chain of discount stores present in every major Japanese city. They have almost everything that you could think of — apparel, accessories, cosmetics, gadgets, and food. One thing I love about Donqui (as it is often called) is that they offer tax-free shopping to foreigners!

18. How can I avail of Tax-Free shopping? 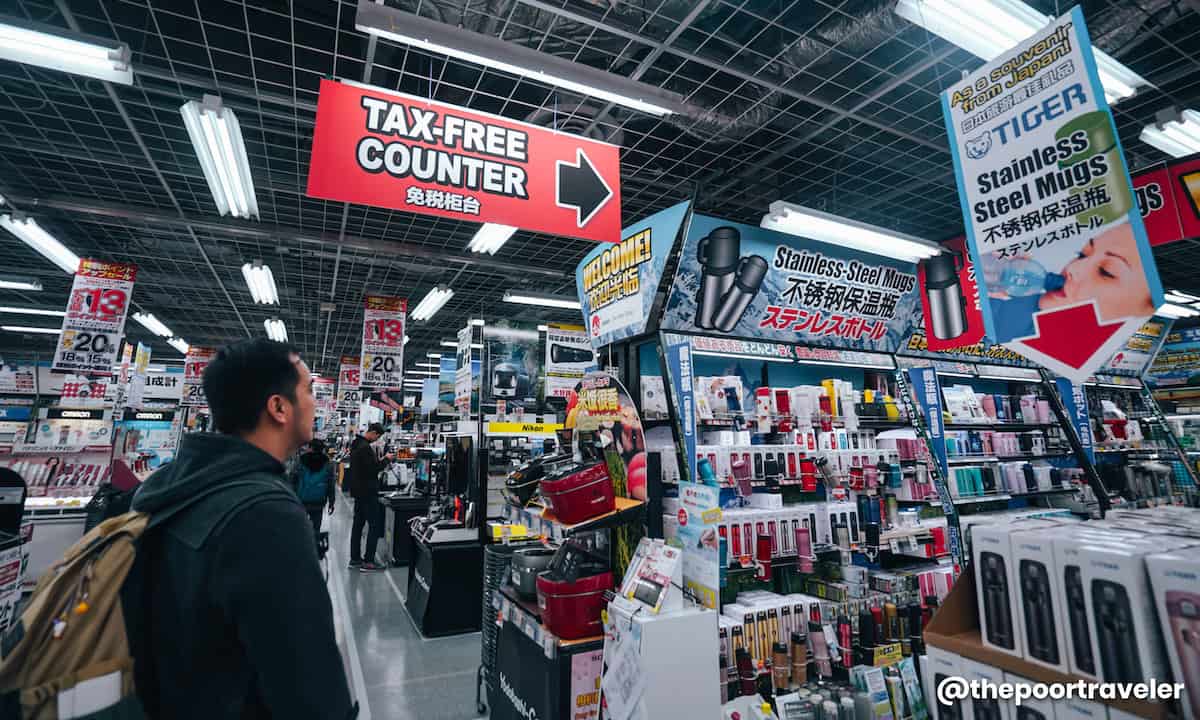 Licensed shops can waive taxes for foreign tourists for purchases of at least ¥5000. All you need to do is find the tax-free counter and present your passport. You won’t be able to avail of it without your passport!

Once processed, they will be stapling the receipt on a page of your passport. This receipt will be collected at the airport, just before the Immigration counters. Just hand the receipt to the collector. Be careful not to damage or mutilate your passport.

19. Is tipping mandatory in Japan?

No. Tipping is not customary in Japan, at least not in most parts.

At restaurants, the cashier is usually stationed by the exit. All you need to do is present the bill to the cashier and pay on your way out. At some establishments, there are vending machines that enable you to choose your order and pre-pay.

20. Is it better to pay cash or with a credit card?

Despite being modern and futuristic, cash is still king in Japan.

Many establishments in cities accept credit card transactions, but cash is preferred in smaller places like ramen bars, food kiosks, and humble stores.

Hi Yoshi and Ken… I have a question… Do you recommend JR pass for a osaka-kyoto-tokyo route for 7 days tour? Is it wise? The all japan JR pass costs 13k and I’m not sure if its beneficial. Thanks… ehat are the pros and cons? Is there a better alternative? Thanks.

Hi Liza, your entry point is Kansai and your exit is Tokyo? If so, consider traveling by bus or plane na lang. It’s cheaper.

We explained that here: https://www.thepoortraveler.net/2017/03/is-jr-pass-worth-it/